Categories Menu
Home » PRODUCTION OF XYLANASE BY PENICILLIUM SP. AND ITS BIOBLEACHING EFFICIENCY IN PAPER AND PULP INDUSTRY

ABSTRACT: The main objective of this study is to evaluate the ability of production of xylanase by a fungal strain Penicillium sp. isolated from decaying wood. Xylanases are hydrolytic enzymes produced by many microorganisms which catalyze the hydrolysis of xylan polymer to xylose monomer. The xylanase production was carried out under submerged fermentation xylose as the main substrate, and the enzyme yield was regularly monitored. Maximum xylanase production was observed on the 4th day of incubation with 123.1 U/ml. The protein secretion was high on the 6th day with 787 μg/ml; total sugar was on the 7th day of incubation (982 μg/ml). Among natural substrates used in this study, corn cobs amended medium had yielded more xylanase production by Penicillium sp. after 6 days of incubation (167.2 U/ml) followed by sawdust and rice bran (128.1 and 120.8). The crude enzyme was used in bleaching of paper pulp and in biobleaching sample kappa number was reduced from 23.1 to 20.8 and brightness was increased to 40.1 from 39.2. It was also observed that chromophores and hydrophobic compounds were removed in xylanase treated pulp samples. Thus by this study, it is highlighted that xylanase by present fungus Penicillium sp. would be useful as a promising biobleaching agent in paper and pulp industry.

INTRODUCTION: The effluents generated from paper and pulping industries are showing the deleterious effect on mankind as well as on the environment. To avoid these environmental hazardous effects novel methods with biotechnology and enzyme technology are in use and are becoming more popular in various industrial sectors 1. Xylanases (O-glycoside hydrolases, EC 3.2.1.) are one of such enzymes getting attention in recent years.

These are the hydrolytic enzymes that randomly split the β-1,4 strength of the complex plant cell wall polysaccharide xylan. The xylan, almost as ubiquitous as cellulose, is the most abundant polysaccharide present in wood, agricultural and several agro-industrial wastes.

The production of xylanases is reported by many different fungi and bacteria. But from an industrial point of view, filamentous fungi are interesting producers of these enzymes due to xylanases releasing and their easy cultivation 2-5. These enzymes have potential industrial, economic and commercial applications and are used in the pulp and paper, food, beverage, textile and animal feed industries 6, 7. Mostly, xylanases are produced by Trichoderma, Bacillus, Aspergillus, Penicillium, Aureobasidium and Talaromyces sp. 8, 4, 5.

The production of xylanases and xylanolytic enzymes by Penicillia has been explored in some species 9, 10, 11, 1. According to Chávez et al., Penicillia are saprophytic and have a rich source of enzymes for the biodegradation of xylan 12. Also, Cellulase-free xylanases are important in pulp biobleaching as alternatives to the use of toxic chlorinated compounds because of the environmental hazards and diseases caused by the release of the adsorbable organic halogens 13. There are several reports of xylanase production from Penicillia from soil, litter and wood chips. In the present study, a laboratory isolate grown on a decayed wood was tested for its production of xylanases and an attempt was also made in testing its efficiency in paper pulp biobleaching.

Screening of Fungal Culture for Xylanase Production: The fungus was screened for xylanase production efficacy by growing it on xylan-agar medium, containing 1% w/v of birchwood xylan and 2% agar incubated at 37 °C. Actively growing 4th-day old fungal strain was inoculated in solid medium and the plates were incubated at 37°C for 5 days. After the incubation period, the plates were screened for xylanase activity by staining with Congo red solution (0.5% w/v Congo red and 5% v/v ethanol in distilled water) for 15 min followed by destaining with 1M NaCl. The plates were then observed for the appearance of the yellow coloured zone around the colony on the red background

The same fungal strain was also tested for its ability of cellulase (CMCase) production on a screening medium on a minimal medium with 1% CMC, and 2% agar. After incubation for 6 days at 37 °C, the Petri plates were flooded with 0.1% Congo Red for 15 min and subsequently destained with 1M NaCl for 30 min. Formation of the zone around the fungal colony was observed for CMCase production.

Enzyme Assay: Xylanase activity was determined by measuring the amount of reduced sugar released in the reaction mixture by the method of Bailey et al. 14 One unit of enzyme activity was expressed as 1 μmol of xylose released per minute per milliliter of enzyme solution.

Biomass Determination: Mycelial mat from fermentation broth was collected and then dried at 70 °C in an oven for overnight. The weight difference between the initial weight of the filter paper and filter paper having mycelial mat given biomass of the fungal mat and was expressed in terms of mg/flask.

Estimation of Total Protein: The amount of Protein content in culture broth was determined according to Lowry et al., 15 using bovine serum albumin (BSA), as the standard.

Production of Xylanase with Agro-industrial Residues as Carbon Sources: Enzyme production on different carbon sources was tested with the addition of different agricultural residues as Carbon sources like corncobs, groundnut shell, rice bran and sawdust at the concentration of 1% (w/v). After inoculation, flasks were incubated for 7 days at 28ºC at 150 rpm. Xylanase activity was determined in each case as described previously.

Effect of Xylanase on Waste Paper Pulp: Waste office paper was finely ground and treated with 1ml of crude xylanase enzyme and incubated for 1 h at 30 ºC. A similar type of pulp was prepared and treated with distilled water and kept as a control.

After incubation, the efficiency of the bioleaching process was measured in terms of reduction in kappa number and brightness of the pulp 17, 18. The pulp free filtrate as used for measurement of reducing the sugar by the DNS method and measurement of chromophores, hydrophobic compounds infiltrate was done at 237, 465 and 950 nm. 19

Characterization of Pulp: The difference between control and enzyme-treated pulp were analyzed by SEM (JEOL JSM- 6701F scanning electron microscope, JAPAN). The results were explained below.

RESULTS AND DISCUSSION: In this study, the fungal strain, Penicillium sp. was screened for enzymes, cellulase and xylanase activities. Qualitative screening on MYG agar medium resulted in the appearance of a clear yellow zone on a red background and revealed that strain was xylanase positive whereas on CMC agar medium there was not any zone formation and found to be cellulase negative. To check the production of xylanase activity, quantitative submerged fermentation of the strain was cultured in liquid PDA broth. Enzyme production was determined for 1 week continuously, and activity exhibited was shown in Fig. 1. 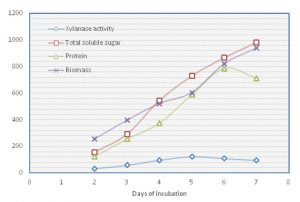 FIG. 1: PRODUCTION OF XYLANASE BY PENICILLIUM IN DIFFERENT DAYS OF INCUBATION

Maximum xylanase production was observed on the 4th day of incubation with 123.1 U/ml, and a little decline was observed after that. In addition to enzyme production total protein and reducing, sugars were estimated in the same incubation time. The protein secretion was high on the 6th day with 787 μg/ml whereas total sugar was on the 7th day of incubation (982 μg/ml). The organism had reached maximum growth of 939 mg/flask on the 7th day of incubation. The production of xylanase by Penicillium sp. in this study was compared to other species of Penicillium. Oat spelt xylan was found to be the best inducer in submerged fermentation for others species of genus Penicillium in studies of Medeiros & others 9, 10, 11, 1, 20. Several other reports related to xylanase production by submerged fermentation using bacteria and fungi stating that submerged fermentation is advantageous and scale up is easy 12.

Influence of Other Carbon Sources on Xylanase Production: The production of xylanases has been extensively studied in submerged and SSF culture processes. But the industrial application of xylanases is hindering due to their high cost. To overcome this disadvantage production of the enzyme on agricultural and agro-industrial wastes as carbon sources may be advantageous. In this attempt, the study was performed experimenting by using Sawdust, corncobs, rice bran, and groundnut shell at 1% to medium instead of xylan.

Of these corn cobs amended medium had yielded more xylanase by Penicillium sp. after 6 days of incubation followed by sawdust and Rice bran. Ground shell amendment had not increased the enzyme production than control. Similar studies also indicated that wheat bran showed to be the best inducer for xylanase production by P. sclerotiorum as for units of activity per volume and specific activity as well. Penicillium expansum, Penicillium sp. ZH-30 and Penicillium chrysogenum xylanases also were induced by this carbon source 21, 22. 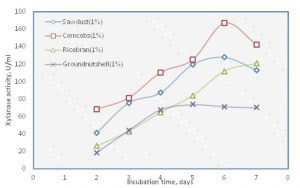 Effect of Xylanase on Waste Paper Pulp: Enzyme treated and control pulp samples were analyzed for Kappa number and brightness. It was observed that in bioleached sample kappa number was reduced from 23.1 to 20.8 and brightness was increased from 39.2   to 40.1 Table 1. It is due to the release of lignin from the pulp as by biological treatment 23. It was also observed that removal of chromophores and hydrophobic compounds were in xylanase treated pulp samples Table 1.

Crude xylanase biobleaching of paper pulp was also studied by T. asperellum and A. niger 4, 5 but with better efficiency than in present study. Similarly, xylanases is utilized as a part of pulp and paper biobleaching to substitute dangerous chlorinated compounds 24, 25. Thus, biobleaching efficiency was found to be effective to ensure minimal damage to the pulp fibers and to generate superior quality of paper pulps.

Change in the surface of the pulp indicates the efficiency of the enzyme. Sridevi et al., (2016 & 2017) had also reported with crude xylanase treatment to a paper pulp with A. niger and T. Asperellum there was a change in morphology of pulp fibers with breaking and appearance of pores and loosening of pulp fibers.

FIG. 3 A & B: SEM IMAGES SHOWING MORPHOLOGICAL CHANGES AND PORES ON PAPER PULP

CONCLUSION: The xylanase production by the strain Penicillium sp. was investigated in this study. The yield of the enzyme was enhanced in the medium when amended with natural agro wastes as substrates than xylan. Crude xylanase application as biobleaching agent on paper pulp was observed as effective after confirming the change in kappa number, brightness, and hydrophobic compounds. Future work will focus on enhancing the enzyme yield and biobleaching efficiency through optimized conditions.

ACKNOWLEDGEMENT: The authors acknowledge UGC, New Delhi, for their financial assistance in the form of a fellowship to carry out this work.