ABSTRACT: Prostaglandins (PG) are commonly used in neonates with cyanotic congenital heart diseases to keep the ductus arteriosus patent. The definite treatment for these conditions is surgery. It is occasionally used for longer duration (weeks to months) in preterm babies. Reversible cortical hyperostosis is a relatively recently recognized side effect of prolonged prostaglandin therapy. We describe the case of an infant presenting this complication secondary to prolonged use of PGE1, with typical and extensive radiological findings. The enzymes (prostaglandin 15-OH dehydrogenase & prostaglandin -13 reductase) that catalyze the degradation of prostaglandins are widely distributed in many vascular beds including those of the spleen, kidney, adipose tissue, intestine, liver, testicles and lungs. PGE is normally rapidly inactivated by these tissues, particularly during passage through the lungs.18 However, infants with cyanotic congenital heart diseases that cause decreased pulmonary blood flow and reduced clearance of PGE may have a higher systemic concentration of PGE. In addition, these patients often receive pharmacologic doses of PGE to maintain the patency of the ductus arteriosus. The resultant higher PGE concentration in the blood may result in osseous changes. However the exact mechanism of cortical hyperostosis is not yet known. It may be a direct, dose-related stimulation of osteoblastic cells.

INTRODUCTION: Prostaglandin-induced cortical thickening seems to be related to duration or dosage of continuous Prostaglandin E1 infusion. Cortical hyperostosis due to PGE treatment can persist for months. This adverse effect is mainly duration dependent but could be dose related as well. After PGE has been discontinued, generally the process is self-limiting with no apparent effect on subsequent bone growth and development.

On day 53, chest radiograph revealed periosteal reaction/cortical thickening of bilateral clavicles, ribs and partially visualized humerii which was seen to be progressed on day 113 babygram involving all long bones. Last chest radiograph obtained at day 157, did not reveal any significant interval change in periostitis in the visualized bony skeleton.

Local cardiology and cardiothoracic teams decided not to attempt any corrective surgery because of poor prognosis of this complex pathology and lack of facilities. Patient was discharged on prostaglandin E1 0.02 microgram / kilogram / minute and was sent abroad for surgical intervention if possible after 5 months. Palliative surgery was performed without recovery and patient died at the age of 8 months.

FIG. 1a AND 1b: X-RAY CHEST AND ABDOMEN AT DAY 3 DEPICTING CARDIOMEGALY. NO PERIOSTEAL REACTION ALONG THE RIBS, CLAVICLES OR HUMERII 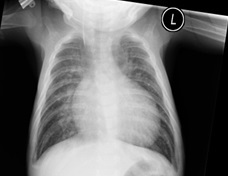 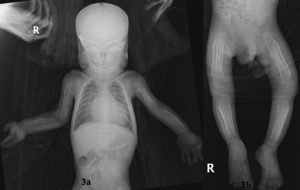 FIG. 3a AND 3b: EXTENSIVE PERIOSTEAL REACTION ALONG THE LONG BONES

PGE1 is usually used as an intravenous infu­­­­­­sion in a dose of 0.05-0.1 mcg/kg/minute for a short duration (ranging between 6 hours to 20 days, till surgical intervention is attempted. Recent studies have tried even lower doses in the range of 0.003-0.005 mcg/kg/minute with success 3. It is occasionally used for longer duration for weeks to months in preterm babies to allow growth of pulmonary arteries to a size suitable for surgery, low birth weight, infection, absence of a specialized hospital or babies awaiting cardiac transplant 4.

Common side effects of short-term prostaglandin therapy include apnea, fever, convulsions, rash, skin flushing, vasodilatation with hypotension, necrotizing enterocolitis, diarrhea and gastric outlet obstruction. In rare situations of prolonged use of alprostadil (PGE1), the most important side effects include soft tissue swelling and reversible cortical hyperostosis in the long bones, friability of ductus arteriosus and damage to the pulmonary arterial smooth muscle 5.

Compared to other side effects of prostaglandins, cortical thickening is considered to be less common within the few days after commencing prostaglandins. Prostaglandin-induced cortical thickening seems to be related to duration or dosage of continuous PGE1 infusion. The percentage of infants on continuous PGE1 infusion, who develop hyperostosis, increases with duration of PGE infusion from 42% at <30 days to 100% at >60 days. These changes can be seen as early as 9 to 11 days on PGE infusion.

Most commonly affected bones are the long bones of upper and lower limbs, followed by ribs and to a lesser extent, clavicles and scapula. When cortical hyperostosis appears, multiple areas may be involved and it is always symmetrical but does not present uniformly. Pseudo-widening of the cranial sutures due to presence of an un-ossified zone at the margins of cranial sutures with no pathological increase in head circumference had also been reported. Zarur et al., reported thickening of skin and subcutaneous tissues, rough texture of skin, coarse facial features, prominent supraorbital ridges and hypertrichosis 6.

The severity of periostitis correlates with rise in serum alkaline phosphatase (ALP) activity which in turn correlates with the duration of PGE1 therapy. Nadroo et al., made a similar observation that ALP activity can be used as a marker for PGE1 induced hyperostosis 7.

Mandible is not involved unlike Caffey’s disease where it is almost always involved. Long bones are always symmetrically affected. There is periosteal elevation of diaphysis with no destructive changes. Metaphysis is spared. Radiological widening of cranial sutures has been reported by some authors without any pathological increase in head circumference. Cortical hyperostosis due to PGE treatment often resolves after cessation of the treatment but can persist for months.

CONCLUSION: Awareness of late complications of prolonged PGE therapy is essential. Hyperostosis is a common side effect of prolonged prostaglandin therapy if it is continued for more than three weeks. Although this is commonly seen with a prolonged use of PGE, it can present as early as 9 days after initiation of therapy. Isolated increase in serum alkaline phosphatase level might be helpful in making a diagnosis of cortical hyperostosis and can be used as a marker for monitoring the activity of the periostitis. Early suspicion and detection may avoid costly and unnecessary laboratory evaluations or inaccurate diagnoses such as child abuse or osteomyelitis, during the resolution phase.