INTRODUCTION: Transdermal therapeutic systems are the recently developed devices, which are non invasive to skin as compared to other routes for administration of drugs. Although the skin, particularly the stratum corneum presents a barrier to most drug absorption, it provides a large (1-2 mtr2) and accessible surface area for drug diffusion. Various types of transdermal therapeutic systems are utilized for long term continuous infusion of therapeutic agents, including antihypertensives, antifungal, analgesics, steroids and contraceptive drugs. Although transdermal delivery is currently limited to few drugs, it has achieved considerable commercial success. Some drugs which are used in transdermal delivery systems include nitroglycerine, scopolamine, estradiol, testosterone, nicotine, clonidine and estrogen-progestin combination into transdermal products 1. Various types of transdermal drug delivery system include liposomes, erythrosomes, liposomes, niosomes, ethosomes, and proniosomes 2.

Nano- erythrosomes: an erythrocyte based new drug carrier, has been developed which is prepared by extrusion of erythrocyte ghosts to produce small vesicle having average diameter of 100μm.

Liposomes: small vesicle of a bilayer of phospholipids encapsulating an aqueous space ranging from 0.03-10μm in diameter.

Niosomes: are non-ionic surfactants based multilamellar or unilamellar vesicles in which an aqueous solution of solute(s) is enclosed by a membrane resulted from the organization of surfactant macro-molecule as bilayer.

Proniosomes and ethosomes are recent development made in transdermal therapeutic systems. These are most advance devices which ignore demerits of liposomes and niosomes such as;

Proniosomes: Proniosomes are dry formulation of water-soluble carrier particles that are coated with surfactant and can be measured out as needed and dehydrated to form niosomal dispersion immediately before use on brief agitation in hot aqueous media within minutes. The resulting niosomes are very similar to conventional niosomes and more uniform in size.

So it is advisable to study the interactions between non-ionic surfactants and the skin. The non ionic surfactants are amphipathic molecules consisting of a hydrophobic (alkylated phenol derivatives, fatty acids, long chain linear alcohols, etc.) and a hydrophilic part (usually ethylene oxide chains of variable length). Nonionic surfactants are used widely in pharmaceuticals to increase their stability, solubility and permeation. There is a strong indication that the degree of interaction between vesicles and skin mainly depends on physicochemical properties of the surfactant molecules of which the niosomes or proniosomes are composed. Skin consists of a range of bioactive material like membrane phospholipids, proteins, amino acids, peptides, etc.

Preparation of proniosome: Carrier which is selected for proniosomes preparation should have following characteristics like free flow ability, non-toxicity, poor solubility in the loaded mixture solution and good water solubility for ease of hydration. Different carriers and non ionic surfactants and membrane stabilizers used for the proniosome preparation are shown in table 1 below;

TABLE 1: NON-IONIC SURFACTANTS AND COATING CARRIERS USED FOR THE PREPARATION OF PRONIOSOMES

There are 3 methods for preparation:

Preparation of niosomes from proniosomes by hydration: Prepared proniosome powder is weighed and filled in screw cap vials. Water or saline at 80°C is added and the vials capped. The vials are attached to a vortex mixer and agitated for 2 minutes to get niosomal formulation 2.

Various methods for characterization of Proniosomes: 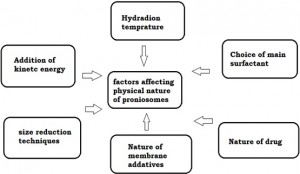 Ethosomes: Ethosomes are lipid-based elastic vesicular systems embodying ethanol in relatively high concentrations which enhance the topical drug delivery. The presence of ethanol prolongs the physical stability of the ethosomes with respect to liposomes. The enhanced delivery of actives incorporated in the ethosomes can be ascribed to the interactions between ethosomes and skin lipids. That may open the new pathways due to the malleability and fusion of ethosomes with skin lipids, which results in the penetration of drug into deeper skin layers.

Interaction between skin and ethosomes: The enhanced delivery of actives using ethosomes over liposomes can be ascribed to an interaction between ethosomes and skin lipids. A possible mechanism for this interaction has been proposed. It is thought that the first part of the mechanism is due to the ‘ethanol effect’, whereby intercalation of the ethanol into intercellular lipids increasing lipid fluidity and decreases the density of the lipid multilayer. This is followed by the ‘ethosomes effect’, which includes inter lipid penetration and permeation by the opening of new pathways due to the malleability and fusion of ethosomes with skin lipids, resulting in the release of the drug in deep layers of the skin 7.

Cold method: Ethosomes can be prepared from soybean phosphatidylcholine (Phospholipon 90), ethanol, drug and distilled water. Phospholipon 90 and drug should be dissolved in ethanol. Water has to be added in small quantities and the preparation mixed by mechanical stirring under controlled conditions. Ethosomal formulations were prepared according to the method reported by Touitou. Phospholipid and drug or fluorescent probe (Rhodamine-123) was dissolved in ethanol.

This mixture was heated to 30°±1°C in a water bath. Double-distilled water heated to 30°±1°C was added slowly as a fine stream to lipid mixture with constant stirring (mechanical stirrer; Remi Equipment; Mumbai, India) at 700 rpm in a closed vessel. Mixing was continued for an additional 5 minutes, while maintaining the system at 30°±1°C. The resulting vesicle suspension was homogenized by passing through polycarbonate membrane of 400, 200, or 100 nm according to initial size of formulation using hand extruder (ore, Billerica, MA) for 3 cycles 8.

Hot method:  In this method, phospholipid is dispersed in water by heating in a water bath at 40oC until a colloidal solution is obtained. In a separate vessel ethanol and propylene glycol are mixed and heated to 40oC. Once both mixtures reach 40oC, the organic phase is added to the aqueous one. The drug is dissolved in water or ethanol depending on its hydrophilic/ hydrophobic properties 69, 70. The vesicle size of ethosomal formulation can be decreased to the desire extent using probe sonication or extrusion method 23.

Various methods for characterization of Ethosomes:

Significance of proniosomes and ethosomes over other liposomal vesicles in transdermal drug delivery system and traditional drug delivery systems: Adsorption and fusion of proniosomes or ethosomes on to the surface of skin leading to a high thermodynamic activity gradient of drug at the interface, which is the driving force for permeation of lipophilic drugs 6 (fig. 2). The effects of ethosomes and proniosomes vesicles as the permeation enhancer reduce he barrier properties of stratum corneum. The lipid bilayers of niosomes act as rate limiting membrane barrier for drugs, stratum corneum in transdermal delivery.

These were non thermoresponsive at 30°C and extremely viscous, hence if either the ambient temperature or the skin temperature were raised to 35°C, they were capable to release their encapsulated contents. 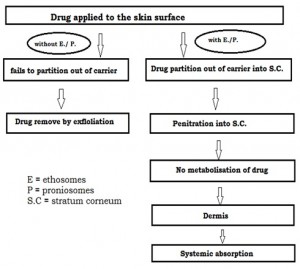 FIG. 2: MECHANISM OF ACTION OF PRONIOSOMES AND ETHOSOMES

On the basis of above description following advantages of proniosomes can be illustrated In comparison to other transdermal & dermal delivery systems:

On the basis of above description following advantages of ethosomes can be illustrated In comparison to other transdermal & dermal delivery systems:

CONCLUSION: Ethosomes have been found to be much more efficient at delivering drug to the skin, than either liposomes or hydroalcoholic solution. Ethosomes have been tested to encapsulate hydrophilic drugs, cationic drugs, proteins and peptides. Ethosomal carrier opens new challenges and opportunities for the development of novel improved therapies. While Proniosomes contain both non-ionic surfactant and phospholipids, both can act as penetration enhancer and useful in increasing permeation powers of many drugs.