Categories Menu
Home » PRONIOSOMES AS A DRUG CARRIER: A REVIEW

PRONIOSOMES AS A DRUG CARRIER: A REVIEW

PRONIOSOMES AS A DRUG CARRIER: A REVIEW

Indira U and Uma Shankar M.S *

Nanotechnology is an advancing technology expected to bring revolutionary changes in the field of life sciences including drug delivery, diagnostics, nutraceuticals and biomedical for implants and prosthesis. The advance in nanotechnology helps in preparing newer formulations. One of the advancement in nanotechnology is the preparation of proniosomes. A comprehensive research has done on proniosomes as a drug carrier for transdermal delivery in last few years. Approaches to stabilize niosomal drug delivery system without affecting its properties of merits have resulted in the development of the promising drug carrier, proniosomes. Proniosomes is dry formulation using suitable carrier coated with non-ionic surfactants and can be converted into niosomes immediately before use by hydration. These proniosome derived niosomes are as good as or even better than conventional niosomes. The focus of this review is to bring out different aspects related to proniosomes preparation, characterization, entrapment efficiency, in vitro drug release, applications and merits.

Controlled release dosage forms are widely used in now a days. It has a prolonged action formulations which gives continues release of their active ingredients at a predetermined rate and for a predetermined time.

The vital objective for the development of controlled release dosage forms is to prolong the extended duration of action and thus gives assurance for higher patient compliance. There are four types of controlled drug delivery systems;

Today, number of novel approaches has emerged covering various routes of administration, to achieve either controlled or targeted delivery 1. Vesicular drug delivery is one of the approaches which encapsulate the drug eg. Liposomes, niosomes, transferosomes, pharmacosomes, and provesicles like proliposomes and proniosomes 1. Vesicular system like Liposomes 2 or Niosomes 3 has specific advantages while avoiding demerits associated with conventional dosage forms because the particulate carriers can act as drug reservoirs, but these particulate carriers has disadvantages rather than advantages.

To overcome these disadvantages vesicular system of proniosomes are arrived. Proniosomes are water soluble carrier particles that are coated withsurfactant and can be hydrated to form niosomal dispersion immediately before use on brief agitation with hot aqueous medium. These proniosomes has additional convenience of the transportation, distribution, storage and designing would be dry niosomes a promising industrialproduct 4, 5.

Hence, dry niosomes can be prepared which are often called as proniosomes and it avoids many problems associated with niosomes like physical stability. Proniosomes can be hydrated immediately before use to give niosomal dispersion.

Proniosomes are dry, free flowing granular product which upon hydration gives multi lamellar niosomal dispersion. This Proniosomal drug delivery have attracted towards transdermal drug delivery because surfactants themselves act as penetration enhancers and are biodegradable, non-toxic, amphiphillic, possess property of encapsulation and they can entrap both hydrophilic and lipophilic drugs 6 as shown in Fig. 1. 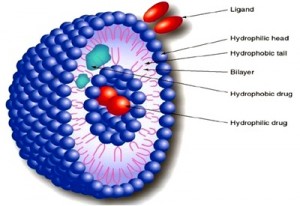 Structure of Proniosomes: Proniosomes are present in transparent, translucent or semisolid gel structure because oflimited solvent presence and these are mixture of liquid crystals like lamellar, hexagonal, and cubic as shown in (Fig. 2). Here lamellar phase shows sheets of surfactants arranged in bilayer, hexagonal phase shows cylindrical compact structure arranged in hexagonal fashion whereas cubic phase consist of curved continuous lipid bilayer extending to three dimentions. While formulating this gel, in the beginning, less viscous composition is formed in some cases but addition of water leads to interaction between water and polar group of surfactant resulting swelling of bilayer. If amount of solvent is increased further, then a spherical structure is formed i.e., mult-ilamellar, multi-vesicular. This leads to complete hydration thereby formation of Niosomes 7, 8. 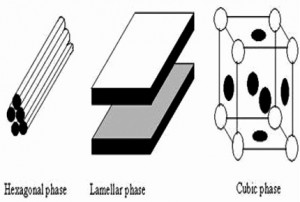 Advantages of Proniosomes over the Niosomes9-12:

Mechanism of Drug Permeation of vesicles through skin:

Proniosomes as Drug Carriers: The proniosomes are promising drug carriers, because they possess greater chemical stability and lack of many disadvantages associated with liposomes. It has additional merits with niosomes are low toxicity due to non-ionic nature, nor equirement of special precautions and conditions for formulation and preparation. Niosomes have shown advantages asdrug carriers, such as low cost and chemical stability as compared to liposomes but they areassociated with problems related to physical stability like fusion, aggregation, sedimentation and leakage and storage.

Proniosomes are dry formulations of surfactantcoated carrier vesicles which can be measured outas needed and rehydrated by brief agitation in hotwater the resulting niosomes are very similar toconventional niosomes and more uniform size 14. Theseproniosomes are minimizing the problemsusing dry, free flowing product which is morestable during storage and sterilization and it has additional merits of easy of transfer, distribution, measuring and storage make proniosomes a pronouncing versatile delivery system 9.

Suitability of Drug to the Proniosomes: Different categories of drugs selections forproniosomes formation based upon the belowmentioned points, 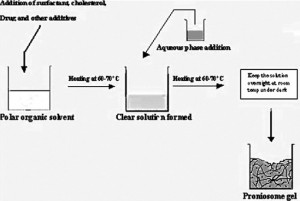 Separation of free Unentrapped Drug: The encapsulation efficiency of proniosomes isdetermined after separation of the unentrapped drug using these techniques:

In-vitro Drug Release from Proniosomal Vesicles: In vitro drug release and skin permeation studies for proniosomes were determined by different techniques like

In-vitro methods for the assessment of Drug Release from Proniosomes: In vitro drug release can be done by (Chen DB et al., 2001);

Drug Release Kinetic Data Analysis 27: The release data obtained from various formulations were studied further for their fitness of data in different kinetic models like Zero order, Higuchi’s and Peppa’s. In order to understand the kinetic and mechanism of drug release, the result of in-vitro drug release study of Niosome were fitted with various kinetic equation like zero order (Equation 1) as cumulative % release vs. time, Higuchi’s model (Equation 2) as cumulative % drug release vs. square root of time. r2 and k values were calculated for the linear curve obtained by regression analysis of the above plots.

Where k0 is the zero order rate constant expressed inunits of concentration / time and t is time in hours.

To understand the release mechanism in-vitro data was analyzed by peppa’s model (Equation 3) aslog cumulative % drug release vs. log time and the exponent n was calculated through the slope of the straight line.

Osmotic shock 28, 29: The change in the vesicle size can bedetermined by osmotic studies. Niosomal formulations are incubated with hypotonic, isotonic, hypertonic solutions for 3 hours. Then the changes in the size of vesicles in the formulations are viewed under optical microscopy.

Stability studies 19: To determine the stability of proniosomes, theoptimized batch was stored in airtight sealed vials atdifferent temperatures. Surface characteristics andpercentage drug retained in proniosomes andproniosomes derived niosomes were selected asparameters for evaluation of the stability, sinceinstability of the formulation would reflect in drugleakage and a decrease. In the percentage drugretained. the proniosomes were sample at regularintervals of time (0, 1, 2 and 3 months), observed for color change, surface characteristics and tested for the percentage drug retained after being hydrated to form niosomes and analysed by suitable analytical methods (UV Spectroscopy, HPLC methods etc.)

Applications of Proniosomes: The application of niosomal technology is widely varied and can be used to treat a number of diseases. The following are the few uses of niosomes which are either proven or under research;

Recently, transdermal vaccines utilizing niosomal technology is also being researched. A study conducted by P.N. Gupta et al., has shown that niosomes (along with liposomes and transferosomes) can be utilized for topical immunization using tetanus toxoid. However, the current technology in niosomes allows only a weak immune response, and thus more research needs to be done in this field.

CONCLUSION: From the above article, it is conducted that the concept of incorporating the drug into niosomes for a better targeting of the drug at appropriate tissue destination is widely accepted by researchers and academicians. Proniosomes serves as a promising carrier for various categories of drugs with improved physical and chemical stability, good bioavailability for poorly soluble drugs.

Proniosomes are good candidates for transdermal delivery of drugs due to non-toxicity and penetration enhancing effect of surfactant. This vesicular system is gaining lot of interest due to its controlled and sustained action. This carrier system is having immense opportunity in the area of transdermal delivery, cosmetics, nutraceuticals etc.

Proniosomal gel has tremendous drug delivery potential for anticancer, anti-infective agents. In future, this area of might be focused for more entrapment efficiency and skin permeation with optimized concentration of surfactant and other formulation parameters. Thus, this area needs further exploration and research so as to bring out commercially available Proniosomal preparation.

ACKNOWLEDGEMENTS: The authors express their gratitude to the Management, Principal, Dean and Faculty members of Krupanidhi College of Pharmacy for their encouragement, support, and guidance for this Review.

Indira U and Uma Shankar M.S *