ABSTRACT: The present work reports a prospective observational study to determine perioperative usage pattern of analgesics. Both general and regional anaesthesia and also different analgesics which is most effective to manage post operative pain were used. 120 patients were studied randomly as per criteria. Techniques of anaesthesia, pre, peri& post operative vitals and pain scores were noted in selected time interval.  Pain score recorded 0-3 as mild, 4-6 as moderate & 7-10 as severe. Of all the analgesics administered in peri & postoperative period, Fentanyl (F) alone & in combination with diclofenac (D) were used maximum in perioperative period. These two groups were compared. In postoperative GA cases, majority patients received paracetamol (P) and tramadol (T) and in regional blocks, Pethidine (PE) Phenergan (PH) combination & tramadol were used. These groups werecompared to evaluate pain perception. Fentanyl alone found to be more effectivein maintaining hemodynamic stability. In fentanyl-diclofenac combination, pulse rate and blood pressure were higher than fentanyl alone. Pain scores were significantly higher in GA compared to regional blocks. In GA patients, fentanyl-paracetamol combination decrease pain significantly compared to fentanyl-tramadol combination. But in regional techniques, pethidine, phenergan and tramadol in combination with perioperative fentanyl shows same result for decreasing pain. Fentanyl is a better analgesics compared to fentanyl+diclofenac combination in perioperative period and in case of postoperative period paracetamol is better effective compared to tramadol HCL in combination with fentanyl

INTRODUCTION: International Association for the Study of Pain defines Pain as an unpleasant sensory and emotional experience associated with actual or potential tissue damage or described in terms of such damage 1. Post operative pain is most common symptoms in patients. Often it can be severe, unnecessary and increases agony of the patient.

In USA, survey of 250 patients who had undergone surgery in the last 5 years before 2008 revealed that 82% reported post-operative pain and 86% reported that pain intensity is either moderate, severe or extreme 4

The goal for postoperative pain management is to reduce or eliminate pain and discomfort with  minimum  side effects as cheaply as possible (Breivik 2008).5 The standard method of treating postoperative pain in the developed world is an intramuscular opioid (usually diamorphine or morphine), but other analgesics (paracetamol, NSAIDs) and local anesthetics may also be used (Taylor 2001).6

Table 1: Age distribution of the patient

MATERIALS AND METHODS: It was a prospective observational study. Data was collected from indoor surgical patients of a tertiary care hospital located at Kolkata. Both males and females were included in age group of 18-60 years, ASA I & II status, abdominal, surface surgery and surgery in extremities which were up to 75 minutes duration were included in the study. ASA III & above, lengthy surgical procedures, neuro, cardiac &thoracic surgeries, patient with history of cardiovascular diseases, rate & rhythm disturbances, hypertension, were excluded. Recording of techniques of anaesthesia. preoperative evaluation of vitals, perioperative vitals at 1, 10, 20, 30, 40, 50, 60, 75min and postoperative vitals at 2nd hr, 3rd hr, 4th hr, 5th hr, 6th hr. was noted. Assessment of Pain as per Visual Analog scale at completion of surgery, 2nd hr, 3rd hr, 4th hr, 5th hr & 6th hr. Assuming pain score 0 means no pain, 1-3 is mild, 4-6 is moderate & 7-10 is severe.

Statistical Analysis was performed with help of Epi Info (TM) 3.5.3. EPI INFO is a trademark of the Centers for Disease Control and Prevention (CDC). Descriptive statistical analysis was performed to prepare different frequency tables and to calculate the means with corresponding standard deviations. Chi-square test was applied as the measures of associations. Test of proportion was used to find the Standard Normal deviate (Z-values) and corresponding p-values for the test of differences between different proportions. T-test was used to compare the means.  p<0.05 was taken to be statistically significant.

In the whole study period 120 patients were included. Following data were obtained from the study population.

Table 3 t-test showed that there was no significant difference in the average pre-operative vitals in different age group (p>0.05).

Table 6: Distribution of drug combination during post-operative period in GA

Table 7: Distribution of pain score in post-operative period under GA treated with F+P and F+T

Table 7: Test of proportion showed that pain was significantly decreased for F+P compared to F+T (p<0.05).

Mohammad Abdullah Al Masud et al, 2009 studied on pattern of use of analgesics in a surgical unit. They found that out of 180 prescriptions containing analgesics was collected randomly. The only drug in the operation day that was used was pethidine (90.6%). Associated analgesics in the operation day were tramadol   (42.2 %). In first post-operative day most of the patients received single drug tramadol (48.3%), ketorolac (38.9%) and pethidine (0.6%). In second, third, fourth and fifth post-operative day most patients received tramadol 47.8%, 44.4%, 41.4% and 33.2% respectively. In this study they concluded that tramadol was found to be widely used post-operative analgesic with minimal side effects and better adherence to this drug by the patient.8

In this current study, the drug which is mostly used in the operation day was fentanyl (75.83%). And paracetamol (40.83%) was mostly used associated analgesics. Our study also concludes that pain is significantly decreased for Fentanyl+Paracetamol combination compared to Fentanyl+Tramadol.

Spencer S. Liu, Christopher L, 2007 have studied the effect of analgesic technique on post-operative patient-reported outcomes including analgesia. In their study they concluded that although there are data suggesting that improved postoperative analgesia leads to better patient outcomes, there is insufficient evidence to support subsequent improvements in patient-centered outcomes such as quality of life and quality of recovery. Modest reductions in pain scores do not necessarily equate to clinically meaningful improved pain relief for the patient. Further studies are needed to develop validated patient-reported instruments and to assess the effect of analgesic techniques on patient-reported outcomes in the perioperative period.10

Comparing with the above studies, it is found in our study that most of the patients having mild to moderate pain in the post operative period. There is no patient who complained of severe pain. And in  both  techniques, when VAS score increases it signify that pain increases and when VAS score decreases that signify pain decreases. That means reduction of pain score signify improved pain management.

Also there was no significant difference in pulse rate between pre-operative and at 75 minutes for F and F+D (p>0.05).

Table 8: Distribution of pulse rates in pre and peri-operative periods under regional block 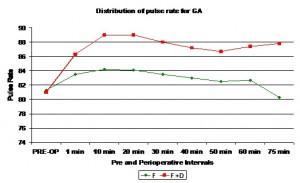 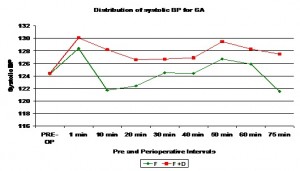 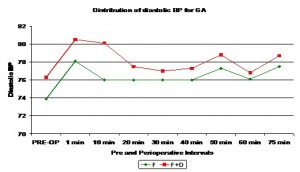 Mohammad Ali Attari et al, 2011 performed a comparative study between Spinal analgesia and general anesthesia for elective lumbar spine surgery. Seventy-two patients were enrolled in the study. They were categorized the study population with 37 patients in GA Group and 35 ones in SA Group. The heart rate (HR), mean arterial pressure (MAP), blood loss, with the operating conditions, the severity of postoperative pain based on visual analogue scale (VAS) and analgesic use were recorded. From this study they found that SA was superior to GA in providing postoperative analgesia and decreasing blood loss while maintained better perioperative hemodynamic stability without increasing adverse side effects.11

In our study it is found that, pain reappears in 5th hr after surgery in case of regional block. Patients feel mild pain at that hour. That signifies good postoperative analgesia.

Table 10: Distribution of pain score in post-operative periods under Regional Block treated with F+PE+PH and F+T

Table 10: Test of proportion showed that there was no difference in decreasing pain (p>0.05).

ACKNOWLEDGEMENT: The authors are grateful for the assistance of all doctors, nurse and other paramedical staff members of the tertiary care hospital located in Kolkata and all faculties of Jadavpur University, Kolkata for their support and honest cooperation. Authors also are grateful to CSIR-CGCRI, Kolkata and DST, New Delhi for their technical and financial support for carrying out the research and publishing the article.