INTRODUCTION: Narrow therapeutic index drugs are drugs where small differences in dose or blood concentration may lead to serious therapeutic failures and / or adverse drug reactions that are life-threatening or result in persistent or significant disability or incapacity. Serious events are those which are persistent, irreversible, slowly reversible, or life-threatening, possibly resulting in hospitalization, disability, or even death. Examples of Narrow Therapeutic Index drugs include digoxin, theophylline, carbamazepine, warfarin, lithium and phenytoin.

A Drug-drug interaction is defined as the pharmacological or clinical response to the administration or co-exposure of a drug with another drug that modifies the patient’s response to the drug index 1.

The effect of a drug-drug interaction might be apparent as decline in therapeutic effect of a drug, increased occurrence of ADRs and compromised treatment outcomes 2, 3. Advanced age, poly-pharmacy and multiple prescribers have been identified as risk factors for occurrence of potential drug interactions 4. DDIs are more likely to happen in the elderly because they tend to use multiple medications and have altered pharmacokinetics 5, 6. When two or more drugs are administered, the activity of one or both the drugs may be altered, resulting in the formation of a new compound, before the administration of drug in the body is pharmaceutical interaction.

When the pharmacological effect of the drug is altered during its absorption, distribution, metabolism or elimination process, it is known as pharmacokinetic interaction. The synergism and antagonism effects among drugs occurring at the site of action are called pharmacodynamic interactions 7, 8. A potential drug-drug interaction is an event that is likely to develop if pharmacists do not make any appropriate intervention. Drug-drug interactions pose significant challenge to health care providers and may affect morbidity, mortality and a patient’s quality of life.

The pharmacist, along with the prescriber must ensure that the patients are aware of the side effects caused by the drugs. The role of a pharmacist is to promote drug utilization evaluation to minimize the drug interactions. The nature and severity of all drug-drug interactions should be identified to educate the staff (physician, nurses, etc) 9, 10.

Method: The prospective study was carried out for a period of nine months in a Tertiary care hospital. Ethical approval was obtained from the Research and Ethics committee, prior to study initiation. Prescriptions with narrow therapeutic index drugs prescribed were selected for the study.

Major: Life threatening effects or permanent damage may be caused.

Moderate: Patient’s clinical status may be diminished and hospital stay may be extended or additional treatment needed.

Depending upon the mechanism of interaction, drug interactions are subdivided into three groups: pharmaceutical, pharmacokinetic and pharmaco-dynamic interactions. 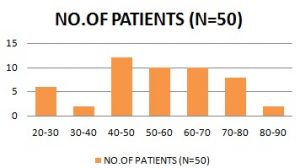 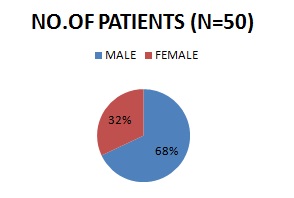 TABLE 3: DISTRIBUTION BASED ON COMORBIDITIES 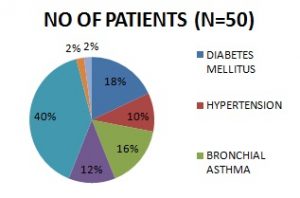 FIG. 3: DISTRIBUTION BASED ON COMORBIDITIES

TABLE 5: DISTRIBUTION BASED ON TYPES OF DRUG-DRUG INTERACTIONS

FIG. 5: DISTRIBUTION BASED ON TYPES OF DRUG-DRUG INTERACTIONS 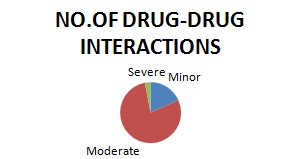 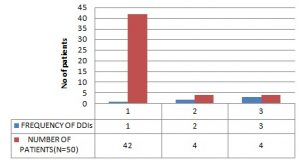 Average number of drugs per prescription (12.55) indicates the incidence of polypharmacy, and in most cases it was unavoidable. The mean age of the patients was 55.4 years. These potential drug-drug interactions were reported to the consulting physician and the patients prescribed with these drugs were monitored. The best way to identify and treat drug interactions is the use of computer programs. Detection and reporting of Drug-drug interactions should be done by all health professionals to ensure patient’s safety.