ABSTRACT: Globally at present, there are an estimated 366 million people affected with diabetes mellitus. The Indian figure is around 61.3 million diabetics, which is projected to cross 100 million by the year 2030. Owing to rise of diabetes mellitus cases, the economic burden due to diabetes in India ranks the highest in the world. With the increasing prevalence of diabetes, it has resulted in an increase in its complications which has resulted in increasing morbidity, mortality and health expenditure due to the requirement of specialized care. Diabetes Mellitus is one of the most prevalent chronic disorders in the modern world. CRP is a plasma protein which is not normally present in the body but its advent is marked by its elevated levels in the blood during certain specific condition, especially marked during the inflammatory events occurred as a result of any kind of injury. Due to its involvement in inflammation, which is also seen as one of the mediators of progression of type II diabetes mellitus and its various complications, it was suspected to be engrossed in their pathogenesis.

Circulating levels of CRP are elevated in persons with obesity, inflammation, insulin resistance, endothelial dysfunction, and subclinical atherosclerosis 3-4. A relationship between C-reactive protein (CRP), a sensitive marker of inflammation, and the development of atherosclerotic disease has been observed in experimental 5-8 and epidemiological studies 9–12. It is still unknown, however, whether elevated CRP levels merely reflect an epiphenomenon accompanying established atherosclerotic disease or whether the protein itself is involved in the initiation and/or progression of atherosclerosis. Previous reports suggest a positive association between components of the insulin resistance syndrome (IRS) and Markers of the acute-phase response, including CRP 10, 12–16 and fibrinogen 17. CRP levels were associated with body mass index (BMI), 10, 12 –14, 16 serum lipids 10, 12–14, 16 and fasting glucose 13. Elevated levels of inflammatory markers (including CRP) were also found in type 2 diabetic patients with features of IRS 15.

The nature of the association of CRP with IRS, however, is poorly understood. We hypothesized that insulin insensitivity and/or hyperinsulinemia may be associated with circulating CRP levels. Such an association would potentially provide insights into the role of CRP in atherosclerotic disease and further clarify the association of hyperinsulinemia with cardiovascular disease 18. It has been shown previously that patients with type 2 diabetes present with higher levels of inflammatory markers 12, 15 and a high prevalence of atherosclerosis, including clinically undetected disease 19.

Materials: A prospective hospital based study on Type-II Diabetic patients was conducted at Government Hospital in India - Chennai. Amongst 50 inpatients registered in Tertiary Care Hospital during 6 months study period (October 2016 - March 2017); 50 patients who met following criteria were included in the study.

Methods: This is a prospective study comprising of a total of 50 patients Type-II Diabetic patients who visited the Tertiary care Hospital Ayanavaram, Chennai, India. Ethical clearance was obtained from the Institutional Ethical Committee for Human Research to conduct the study (IEC/DOPI/2016/02). The sample consisted of 25 males and 25 females.

The age mean ± standard deviation of male and female subjects was 53.4 ± 12.40 years and 48.16 ± 9.7 years respectively. All the patients were categorized into three age groups: <40 years (8 patients), 41-60 years (35 patients), >60 years (7 patients). Subject weight and height were measured and BMI (Kg/m2) calculation was made and categorized into overweight and obese patients. Systolic and diastolic blood pressures were measured in a seated position. Information of subject’s life styles was obtained from their responses to questions about their social habits regarding smoker and alcoholic.

The study will be carried out by the collection and documentation of general information of the patient including personal history, family background, clinical findings, Lab investigations which includes Serum creatinine, BUN, Lipid Profile, CRP and medical illness associated with Daibetes Mellitus. 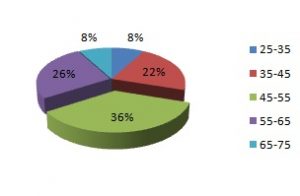 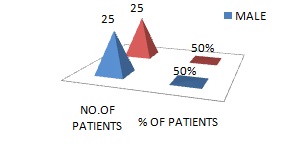 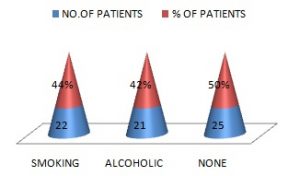 FIG. 3: DISTRIBUTIONS BASED ON SOCIAL HABITS

Out of selected 50 patients, 22 patients (44%) are smoker, 21 patients (42%) are alcoholic and remaining 25 patients (50%) don’t have any social habits. In this study people who prone to smoking were affected. 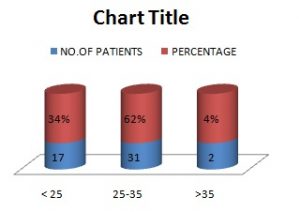 Our study results according to baseline characteristics of 25 men and 25 women shows the age mean ± standard deviation of male and female subjects was 53.4 ± 12.40 years and 48.16 ± 9.7 years respectively. But depending upon the glycemic control males are significantly affected when compared to females. CRP levels are elevated in females when compared to males.

Compared with men, women are lightly and shorter, but they had higher BMI. The FBS, PPBS and HbA1c levels were higher in male as compared to female. The level of TGL and HDL was lower and LDL was higher in females than males. Women had higher concentration of CRP, BUN, and Serum Creatinine, systolic and diastolic pressure.

DISCUSSION: Approximately 50-75% of deaths in patients with diabetes are attributed to cardiovascular diseases 20. The lack of concordance between the effect on coronary heart disease risk of CRP genotypes and CRP levels argues against a causal association of CRP with coronary heart disease 21. Serum CRP is a risk factor for diabetes, independent of obesity. Furthermore, genetic variation in CRP was associated with the level of CRP and the risk of diabetes. These results support the hypothesis that CRP plays a role in the pathogenesis of diabetes 22. CRP levels are related to the acceleration of progression of cardiovascular disease. As discussed in this article CRP could initiate atherosclerosis, clot formation and plaque destabilization. It may, therefore, be beneficial to reduce the plasma levels of CRP.

CRP should not be viewed, however, only as a marker for inflammation, but as one of the possible risk factors for cardiovascular diseases 23. Elevated HbA1c has been regarded as an independent risk factor for CAD in subjects with or without diabetes 24. The diabetes control trial (DCCT) established HbA1c level <7% appropriate for reducing the risk of vascular complications and also as the gold standard glycemic control 20. Each 1% reduction in HbA1c was associated with reduction in the risk of 21% for any end point related to diabetes, 21% for deaths related to diabetes, 14% for myocardial infarction, and 37% for micro vascular complication 20. Type-II Diabetes Mellitus patients are at a much higher risk cardiovascular diseases than non-diabetic. Thus the risk of cardiovascular events in diabetics can be reduced by improving the glycemic control 25.

In our study we found that CRP has direct and significant correlations with age, body mass index, low density lipoprotein, blood urea nitrogen, serum creatinine similar to other studies 26. The level of CRP was significantly higher in female patients when compared to males (Table 5). Similar to other studies an elevation of serum C-reactive protein was demonstrated in both Males and Females type 2 Diabetes mellitus 27. CRP was not a significant predictor of the development of the metabolic syndrome in men. Inflammation is important in the pathogenesis of diabetes and metabolic disorders in women 28. Older patients had lower FBS, PPBS, HbA1c, TGL, Serum creatinine and diastolic pressure 29-31. However, women with diabetes are more susceptible to increased cardiovascular mortality 32.

They are subjected to more adverse changes in coagulation, vascular function and cardiovascular risk factors than diabetic men. CRP is a predictor of the development of diabetes in middle-aged men independent of established risk factors, including fasting plasma triglyceride, BMI, and glucose. Indeed, in multivariate analysis, a change in plasma CRP concentration in our cohort was associated with a hazard ratio similar to BMI, plasma glucose, and triglyceride concentration, factors known to predict diabetes 26. CRP may be a risk factor for development of type 2 diabetes independent of either obesity or insulin resistance there is a strong need to detect it in early stages to take appropriate preventive measures. Although, the significance and prognostic value of inflammatory markers such as Hcy and CRP have been studied and well established for assessing CVD risk in the Western population, we lack sufficient evidence to replicate the findings among Asian Indians. The risk stratification among Asian Indians may begin at much lower values than Western standards requiring us to revise and re-establish population-specific normal values.

The present study showed significant positive correlation between Hcy and fasting insulin and high blood glucose. The monitoring and evaluation of inflammatory markers alongside the metabolic risk factors will enable better understanding of metabolic disease prevention and progression 33. Dietary pattern representing the Western-type diet is associated with increased levels of hs-CRP while a healthy or prudent dietary pattern characterized by high intake of vegetables, fruit, and whole grain is associated with lower concentrations of hs-CRP. High consumption of vegetables and fruit especially citrus fruits may exert an anti-inflammatory effect Potentials of magnesium, dietary fiber, and n-3 fatty acids to lower hs-CRP levels warrant further investigation. Both mechanistic and epidemiologic studies regarding dietary factors and low-grade inflammation will add to our knowledge on diet and chronic diseases 34.

The above discussion clearly indicates the clinical significance of various parameters in predisposing to diabetic patients in detected CRP levels to cardiovascular complications. Significant correlations between CRP, Blood sugar level, HbA1c, BUN, serum creatinine, systolic, diastolic pressure and all lipid parameters and a linear relationship between CRP, Type-II Diabetes Mellitus and cardiovascular diseases point towards the usefulness of HbA1c for screening diabetic patients at high risk of developing CAD.

CONCLUSION: The findings of the study ensures the role of CRP as an Inflammatory marker in Type-II Diabetes Mellitus patients in detected CRP levels to predict cardiovascular diseases. The study concludes that a positive association between levels of CRP and incident diabetes, which supports a role of inflammation in the etiology of diabetes in the high risk population. The association was independent of established risk factor for diabetes. Therefore, inflammatory markers, like CRP, can be useful for early detection of high risk individuals. These results support the hypothesis that CRP plays a role in the pathogenesis of diabetes.