ABSTRACT: Liver is a vital organ performing wide range of functions; oxidative damage is implicated in the pathogenesis of various liver disorders. Present study was aimed at evaluating protective ability of Thuja orientalis Linn against thioacetamide induced hepatotoxicity in rats. Thuja orientalis has been used in Ayurvedic medicine for the treatment of various disorders. Thuja orientalis has the biological capabilities of detoxication, antioxidation, and antiinfection. In this study, we evaluated the antihepatotoxic effect ofThuja orientalis aqueous and petroleum ether extract on the thioacetamide induced liver injury in a rat model. Hepatic damage, as reveled by histology and the increased activities of serum aspartate aminotransferase (AST), alanine aminotransferase (ALT), alkaline phosphatase (ALP) activities, and decreased levels of serum total protein (TP), albumin (Alb) and globulin (G) were induced in rats by an administration of 50 mg/kg thioacetamide was injected intraperitoneally (i.p). Thuja orientalis extract significantly inhibited the elevated AST, ALP and ALT activities and the decreased TP, Alb and G levels caused by thioacetamide intoxication. From this study, it can be concluded that the aqueous and petroleum ether extracts of Thuja orientalis possesses effective hepatoprotective activity.

INTRODUCTION: Liver is the key organ of metabolism and excretion. It is often exposed to a variety xenobiotics and therapeutic agents. Until today, people have not yet found an actual curative therapeutic agent for liver disorder In fact; most of the available remedies help the healing or regeneration of the liver. The hepatotoxin: thioacetamide is frequently used to induce liver fibrosis in animal models. Liver is the main organ which regulates many important metabolic functions.

Liver disorders being a serious health problem and still remain common and unconquered. In modern medicines only limited numbers of drugs are available for the treatment of liver disorders with so many adverse reactions. So for that reason various herbal based preparations are used for safe and effective treatment of liver disorders 1, 2. Free radicals lead to cell damage through mechanisms of covalent binding and lipid peroxidation with subsequent tissue injury, cellular necrosis, rheumatoid arthritis as well as toxicity of many xenobiotics 3. Now a days natural Antioxidant agents are preferred vastly than synthetic as they can protect human body from oxidative damage and free radicals with least side effects 4. The plant shows a pungent, aromatic flavor and is commonly cultivated for culinary purposes.

Thuja orientalis is also called as Platycladus orientalis which especially is used for treating various types of diseases and having many pharmaceutical applications 5, 6.

The present study was designed to investigate the hepatoprotective efficacy of aqueous and petroleum ether extract of Thuja orientalis leaf in thioacetamide induced hepatotoxicity rats.

Plant material: Leaves of Thuja orientalis were collected in the month of November 2011 from Dasapalla forest division, Nayagarh district of Odisha, India. The plant was authenticated by Dr. A.K. Singh (H.O.D) T.D.P.G. College, Jaunpur, U.P, India. The leaves were cleaned and dried under the shade to avoid degradation of volatile oil.

Preparation of plant extract for Phytochemical Screening and Hepatotoxicity Studies: The Thuja orientalis leaves were shade dried at room temperature and the dried leaves were powdered in a Wiley mill. Hundred grams of powdered Thuja orientalis leaves was packed in a Soxhlet apparatus and extracted with water and petroleum ether. The extract was subjected to qualitative test for the identification of various phytochemical constituents as per standard procedures 7.

Acute Toxicity Study: Acute oral toxicity study was performed as per OECD-423 guidelines (acute toxic class method), albino rats (n=6) of either sex selected by random sampling were used for acute toxicity study If mortality was observed in one animal, then the same dose was repeated again to confirm the toxic dose. All animal experiments were approved by Institutional Animal Ethics Committee (IAEC) of PBRI, Bhopal (Reg No. - 1283/c/09/CPCSEA).  The protocol approval reference number is PBRI/12/IAEC/PN-340.

RESULTS AND DISCUSSION: Different types of parameters are adopted in the protocol, i.e.

The time interval between loss and regain of righting reflex was measured as Thiopentone induced sleeping time (TST) 8.The animals were sacrificed and the abdomen was cut open to remove the liver. The liver was observed for Wet liver weight   and Wet liver volume. All the readings are expressed in the following table 1.

Where TAA= Thioacetamide, TO= Thuja orientalis, Values are Mean ± SEM; n = 6 animals in each group; **P<0.01   is considered significant when compared with standard group and * P<0.05 &  nsP<0.05 compared with thioacetamide-treated group  by Dunnett’s multiple comparison test. 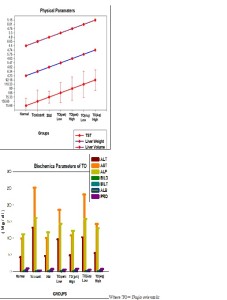 Biochemical parameters: The blood was collected from all animals by puncturing retro-orbital plexus.  After collection the blood samples were allowed to clot for 45 min at room temperature.  Serum was separated by centrifugation at 2500rpm at 300oC for 15 min and utilized for the estimation of various biochemical parameters namely SGOT, SGPT 9, SALP 10, serum bilirubin 11 and total protein 12. All the readings are expressed in the following table 2.

Where TO= Thuja orientalis

Values are Mean ± SEM; n = 6 animals in each group; **P<0.01   is considered significant when compared with standard group and * P<0.05 & nsP<0.05 compared with Paracetamol-treated group by Dunnett’s multiple comparison test.

Histopathological studies of the Liver sections 13: For histopathological study, on day 28, all animals were sacrificed by under mild ether anesthesia .The whole liver from each animal was removed after sacrificing the animal and was collected in 10% formalin solution, and immediately processed by the paraffin technique. Sections of 5 micron thickness were cut and stained by haematoxylin and eosin (H & E) for histological examination.  Then the slides were examined by pathologist and the pictures were clicked with the help of a binocular microscope fixed with a camera (fig. 1). 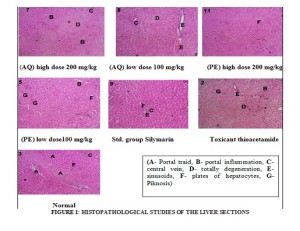 DISCUSSION: Clinical benefits of Thuja orientalis have been reported. Thuja orientalis extracts have been used in the clinical treatment of numerous illnesses  with considerable success in world (Alok et al., 2014).It has a wide range of functions, including detoxification, protein synthesis, and production of biochemicals necessary for digestion . A large number of plants and formulations have been claimed to have hepatoprotective activity. In India, many plants medicines possessed hepatoprotective activity.

Thioacetamide induced hepatic destruction, as evidenced by decreased serum AST, ALT, and ALP levels. Thioacetamide is a well-known hepatotoxic agent. The basis of its hepatotoxicity lies in its biotransformation by the cytochrome P450 system to free radicals. Since free radicals play such an important role in Thioacetamide -induced hepatotoxicity, it seems logical that compounds that neutralize such radicals may have a hepatoprotective effect. Indeed, various natural products have been reported to protect against thioacetamide -induced hepatotoxicity. The reduction in the serum and liver levels of albumin in the acetaminophen intoxicated group might be due to liver damage. Hepatotoxicity impairs the synthetic function of the liver. In particular, it reduces albumin production by the liver, and by extension, its serum quantity 14.

CONCLUSION: The present investigation indicates that Thuja orientalis (AQ) and Thuja orientalis (PE) extract shows significant protection against thioacetamide-induced toxicity by its ability to ameliorate the lipid peroxidation through the free radicals scavenging activity. Our study also showed that petroleum ether extract of Thuja orientalis in the dose of 100mg/kg and 200mg/kg has greater effect than aqueous extract at the same dose level. Therefore petroleum ether extract appears to be useful in the attenuation of thioacetamide induced lipid peroxidation and showed more prominent effect than aqueous extract. Both the extract showed significant activity against thioacetamide induced liver damage in rats when compared with that of standard drug silymarin. Further investigation is underway to determine the exact phytoconstituents in the extracts that are responsible for its hepatoprotective effect.

ACKNOWLEDGEMENT: Thanks to Pinacle Biomedical Research institute (PBRI), Bhopal for their assistance in animal studies.Also thanks to Mr.Niranjan sutar for his support.