INTRODUCTION:Reactive oxygen species (ROS) including free radicals such as superoxide anion radicals (O2-), hydroxyl radicals (OH-) and non-free radical species such as H2O2 and singlet (O2.) are generated in body continuously as by product of various essential processes like energy generation, phagocytosis and detoxification reactions 1.

Antioxidants are the compounds that can scavenge the free radicals or break the chain reaction due to their redox properties. Process of free radical production and their propagation is induced by the metals like iron and copper, therefore, chemical compounds with metal chelating properties also exhibit antioxidant character 3. Constant supply of antioxidant phytochemicals through dietary supplements can prevent, delay or ameliorate many of the free radicals and can increase the antioxidant capacity 2, 3.

Naturally occurring antioxidants in leafy vegetables, fruits and seeds such as ascorbic acid, vitamin E and phenolic compounds have ability to reduce oxidative damage associated with many diseases including cancer, cardiovascular diseases 3, cataract 4, arthritis and diabetes 5.

Fenugreek (Trigonella foenum-graecum) is a widely used herb belonging to the family Leguminosae grown in Asia and Middle Eastern countries. Seeds of the herb are known as insulin stimulating agent and galactagogue. Use of fenugreek seeds can inhibit cholesterol absorption and can lower sugar level, therefore used as a traditional remedy for the treatment of diabetes and hypercholesterolemia in Indian and Chinese medicines 6, 7. It is reported to have restorative and nutritive properties and to stimulate digestive processes, useful in healing of different ulcers in digestive tract 6.

Fenugreek has also been reported to exhibit pharmacological properties as antitumor, antiviral, antimicrobial, anti-inflammatory, hypotensive and antidiabetic agent 5-8. Aqueous fenugreek extract is reported to prevent liver damage under alcohol induced hepatotoxicity 6 and apoptosis 9. Although extracts of various herbs, fruits, vegetables and spices including fenugreek have exhibited free radical scavenging and metal binding activity 8-13 but no comprehensive study on the level of antioxidants in fenugreek seeds and their influence on the damage caused to biomolecules by oxidative stress is reported.

Since the plant sources are known to contain various antioxidants like ascorbic acid, riboflavin, tocopherols and phenolics, which may vary in the mechanism of action or may work in synergetic manner, the present study was undertaken to identify and quantify the possible active antioxidant principles in fenugreek seeds and to study their influence on the oxidative damage induced in biomolecules.

Extraction: Fenugreek seeds were dried at 600C in hot air oven till constant weight is attained. Finely powdered fenugreek seeds were extracted with 80% aqueous methanol (1g/10ml) in a shaker at room temperature for 4 hrs. Residue was again extracted with 80% methanol for 2 hrs. Collected extract was filtered through double layered muslin cloth followed by centrifugation at 5000g for 5 min to get clear supernatant. Extract was concentrated in a vacuum evaporator and stored at -200C for further use. The extract was diluted appropriately for different experiments.

Qualitative and quantitative analysis of polyphenolic compounds using HPLC: The methanolic extract was defatted with n-hexane. The defatted extract was treated with 2 N HCl to hydrolyze glycosidic bonds. The extract dried and again dissolved in methanol, was subjected to HPLC for qualitative and quantitative analysis of free phenolic contents. The HPLC system (Agilent Technologies Company) was equipped with dual lamp binary system, UV detector, Eclipse XDB-C18 column (i.d.4.6 mm x 150 mm, 5 µm) and data was integrated by Agilent Chem Station software. Standards and sample extract were analyzed using the following gradient program (A,100% acetonitrile; B,2.5% HPLC grade water) 0 min, 5%A: 10 min, 15%A: 20 min, 25%A: 30 min, 35%A: 40min, 45%A: 50 min, 55%A. Flow rate was 0.5 ml/min and injection volume was 10 µl. Detection was done at 280 nm. Peak area (280 nm) of the sample is an index of the amount of component and the retention time of individual peaks is used to identify polyphenols by comparing with standard polyphenols; caffeic acid, ellagic acid, ferulic acid, quercetin and kaempferol.

RESULTS AND DISCUSSION: Herbs, spices and condiments are an integral part of human diet to impart flavor, taste and color to the food. Several healthy benefits of consumption of a number of such spices and herbs including a digestion stimulating action, a hypolipidemic effect, antidiabetic influence, presence of antimutagenic, anti-inflammatory, anticarcinogenic and antioxidant potential have been reported 3,7.

Traditional use of spices and herbs in various clinical situations related to oxidative stress indicates their pharmaceutical and medicinal potential. Various secondary metabolites and phytochemicals caninhibit the production and propagation reactions of ROS or terminate these reactions when present in small amounts. In the present studies, fenugreek seed extract was analyzed for possible antioxidant principles. The capability of methanolic extract to protect various biomolecules against oxidative damage was examined to find out the probable mechanism of interaction of the antioxidants from fenugreek seeds with cellular components.

Total ascorbate and tocopherol are 99.97±4.62 µg and 22.0±1.54 µg/ g dry seeds, whereas riboflavin is only 0.115±0.04 µg/g dry seeds. Methanolic extract of fenugreek had considerable amount of polyphenols 9.470±0.10 mg GAE/g dry seeds. Much less yield of 5-6 mg polyphenols/g dry seeds is reported with polar solvents like ethanol 10, whereas more phenolics could be extracted from fenugreek seeds with distilled water than polar solvents 13.

Polyphenolic flavonoids are reported to be the active antioxidant constituent of the aqueous and methanolic extracts of herbs including fenugreek 9-13.

Polyphenols have good antioxidant potential both as free radical scavenger and inhibitor of metal induced oxidation 2, 3. Polyphenols can contribute as metal ion chelators due to the presence of various hydroxyl radicals. The π electron cloud of one or more benzene rings makes them suitable as antioxidants. Polyphenolic compounds are usually present as glycosides in plant sources. The extract was hydrolyzed with 2N HCl to break glycosidic bonds before analysis by HPLC. Polyphenols extracted from fenugreek seeds were characterized qualitatively and quantitatively by HPLC (Table 1).

The identification of polyphenols was done by comparing retention time of the peaks with that of standard compounds. Gallic acid, caffeic acid, ellagic acid and quercetin could be identified in fenugreek seed extract by HPLC. Quantification of the identified compounds was achieved by comparing the peak area of individual compound with that of standards (2 ng/10 µl). Methanol extract of fenugreek seeds had 170.335 µg gallic acid, 164.550 µg caffeic acid, 184.879 µg ellagic acid and 215.814 µg quercetin/g seeds.

Antioxidant activity of the polyphenols increases with the number of hydroxyl groups and the density of π electron cloud. Gallic acid among the simple phenolics and quercetin among flavonoids have most potent antioxidant activity 14.

A positive correlation between the DPPH radical scavenging activity and polyphenol content of the chloroform extracts of various spices has been reported 12.

Methanol and aqueous extracts of various plant sources are reported to have better free radical scavenging activity than dichloromethane or ethyl acetate extracts indicating the polar nature of the antioxidant biomolecules 13. DPPH scavenging activity of fenugreek seed extracts in ethanol and methanol are correlated to the total polyphenolic content of the extracts 10. High polyphenol content, with quercetin in the fenugreek extract seems to be the major free radical scavenger in the present study.

Lecithin peroxidation inhibition: Polyunsaturated lipids are susceptible to oxidative attack by free radicals and reactive oxygen species, causing the onset and propagation of oxidative chain reactions. Lipid oxidation brings about chemical changes leading to the spoilage of fats and fatty acids of foods. Membrane lipids of cells have polyunsaturated fatty acids so are more prone to oxidation. Damage to the membrane lipids can affect permeability and hence various processes related to membrane integrity such as apoptosis, autogenesis and carcinogenesis 2, 3.

Metal ions such as iron and copper can induce oxidation of lipids leading to the production of peroxy radicals. Peroxy radicals propagate chain reaction and generate ROS, which can further accelerate lipid oxidation. Malonaldehyde produced by copper induced oxidation of egg lecithin in presence and absence of different dilutions of fenugreek extract was determined as thiobarbituric acid reactive substances (Fig. 2).

In controls, 19.35±0.32 nmoles of MDA was produced and the production of MDA was reduced to 5.223±0.45 nmoles in presence of the extract equivalent to 5 mg of the fenugreek seeds. IC50, the amount of fenugreek seeds required to inhibit the lipid peroxidation to 50%, calculated from the curve is 2.0 mg.

The results indicate that antioxidants from this herb are efficiently preventing the oxidation of lipids induced by metals either by metal chelation or by inhibiting the propagation reactions being hydrogen/electron donor.

Metal ion chelating capacity plays a significant role in antioxidant mechanism since it reduces the concentration of the transition metal catalyzing lipid peroxidation.

Lower IC50 for lipid oxidation inhibition than DPPH scavenging indicates that metal chelation in addition to reducing properties of polyphenols is contributing to the antioxidant activity in protecting lipids against oxidation. A decrease in lipid oxidation in liver cells in the presence of fenugreek seeds has been reported 5, 9. Inhibition of lipid peroxidation by the polyphenols from other plant sources 12, 14, 15 has also been reported. 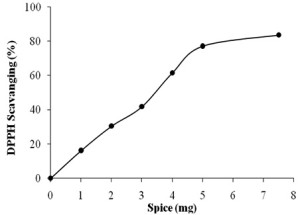 Protein oxidation inhibition: Oxidative modifications were induced in BSA by incubation with copper ions in presence and absence of fenugreek extract (Fig. 3). The process of oxidative modifications was inhibited by 52.6% in presence of extract equivalent to 10 mg of fenugreek seeds. Presence of extract equivalent to 9.2 mg dry seeds is required to inhibit the metal induced protein oxidation upto 50%.

Sulphydryl groups of the proteins are susceptible to oxidation in presence of ROS generated by metal ions. The side chains of the cysteine residues are oxidized to cystine. The sulphydryl groups play an important role in the structure and function of proteins. Deleterious impact of oxidative stress in biological systems is related to the damage of proteins, enzymes and various transcriptional factors like NFkB and AP-1 1, 5, 16. The protection of protein and lipid against oxidative damage by fenugreek extract is an index of metal chelating and reducing property of the antioxidants. Inhibition of metal induced oxidation by the extracts of various herbs has been attributed to the presence of polyphenolic compounds in the extracts. IC50 for protection of protein oxidation is higher than that for lipid oxidation, indicating that electron transfer to lipids is more efficient than to proteins. 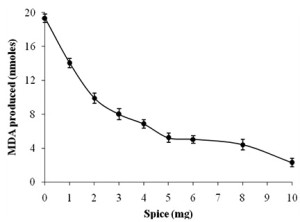 FIG. 2: INHIBITION OF LIPID PEROXIDATION IN PRESENCE OF FENUGREEK EXTRACT 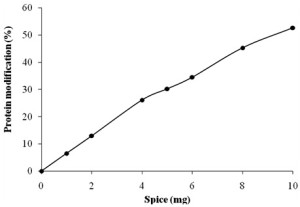 FIG. 3: INHIBITION OF PROTEIN OXIDATION IN PRESENCE OF FENUGREEK EXTRACT 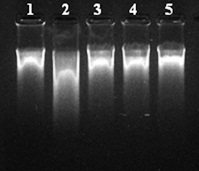 Protection of DNA against H2O2 induced damage: Oxidative stress generated by Fenton`s reaction in vitro can cause breaks in calf thymus DNA. Incubation of DNA with FeSO4 and ascorbate has caused damage to DNA and damaged DNA moves to a greater extent in the gel (Fig. 4). Presence of extract equivalent to 0.5 µg, 1.0 µg and 1.5 µg fenugreek seeds in the incubation mixture could prevent the damage. This protective impact of the extract indicates that antioxidant formulation from fenugreek seeds can efficiently quench hydroxyl radicals from the reaction mixture. Oxidation of nitrogenous bases of nucleic acids may cause mutations 1-3.

CONCLUSION: The results of the present study indicate that methanolic extract of fenugreek seeds has polyphenols including gallic acid, caffeic acid, ellagic acid and quercetin, responsible for the high free radical scavenging and metal chelating activity of fenugreek seeds. Antioxidants of the methanolic fenugreek seed extract protect important biomolecules like lipids, proteins and DNA against oxidative stress. Polyphenols from fenugreek seeds are more efficient in protecting lipids than proteins. Natural antioxidants present in fenugreek, as a whole or in extracted form as a component of composite food formulations may be explored in order to stabilize or enrich food with antioxidant properties. Fenugreek seeds, with high efficacy as antioxidant, have great potential to be used as pharmaceutical and nutraceutical agent.