ABSTRACT: Objective: Mako (Solanum nigrum L.), Black Nightshade in English, belongs to the family Solanaceae is an edible plant. The whole plant is used as a green source of vegetables and berries as a fruit. It is a good source of antioxidant and has potent anti-inflammatory, diuretic, lithotriptic, wound healing properties. Unani scholars have advocated the berries to treat many renal ailments, including renal failure. The aim of this study was to evaluate the nephroprotective activity of the berries of Mako on gentamicin-induced nephrotoxicity in rats to authenticate the traditional claims. Materials and Methods: Wistar rats were divided into eight groups of six animals in each, group I – control, group II toxicant (gentamicin) and III–VIII were high dose (800 mg/Kg) of methanolic extract (ME), low dose (200 mg/Kg) of ME, Petroleum soluble fraction, chloroform soluble fraction, water-soluble fraction and water-insoluble fraction of ME, respectively.  Test drugs were administered from day 1 to 8 along with toxicant from day 4 to 8. Results: At the end of the study, blood urea nitrogen (BUN), serum creatinine (Sr.Cr.) and histo-pathological analysis were carried out. It was revealed that the ME of S. nigrum and its fractions significantly reduced the rise of BUN and Sr. Cr. creatinine levels induced by gentamicin. The histopathological analysis also showed the protective nature of S. nigrum in this study. Conclusion: Biochemical parameters and histopathological results of this study confirmed that the berries have nephroprotective activity against gentamicin-induced renal damage which justifies the traditional claims.

INTRODUCTION: Mako (Solanum nigrum L.)is an herb belongs to the family Solanaceae, known in English as “Black Nightshade”, which is widely distributed in the tropical and temperate regions, and countries like India, Sri Lanka, etc 1.

It is one of the famous edible plants used traditionally, especially the whole plant is used as a green source of vegetables and used to prepare soups as well. Further, its berries affectionate the children for their peculiar taste.

Mako is also known as Inabus salab in Unani medicine, indicated for a number of diseases. Murawwaqain, one of the famous preparations in Unani medicine, is prepared by the fresh leaves of the plant which is known to have anti-inflammatory properties. Leaves have been reportedly used in traditional medicine for the management of several diseases including seizure, epilepsy, pain, ulcer, inflammation, diarrhea, eye infections, diseases of kidneys, cirrhosis of the liver, viral hepatitis, jaundice, etc. 2 According to Unani system of medicine this plant has wound healing, anti-inflammatory, diuretic, carminative, lithotriptic and refrigerant properties 3-6.

Gentamicin, an aminoglycoside antibiotic, is used widely in the treatment of gram-negative infections. It is also active against Staphylococcus and Enterococcus, especially in synergy with β-lactams, and very effective antibiotic for many severe infections. Low rates of resistance and cheap made abundant usage of this drug 7. Nevertheless, nephrotoxicity produced with the therapeutic doses of gentamicin, may be a limiting factor for its wide usage 8.

The formation of free radicals leading to oxidative stress has been shown to be one of the main pathogenic mechanisms of these toxicities and side effects of nephrotoxicants 9, 10 and in various models of toxic renal failure 11. Reactive oxygen species (ROS) have been proposed as a causative agent of cell death in many different pathological states as well as in glomerular diseases in renal ischemia, reperfusion injury 12 via several mechanisms, including peroxidation of membrane lipids, protein denaturation, and DNA damage. The nephrotoxicity is characterized by direct injury to proximal tubules followed by declining renal function. It is measured clinically by a rise in blood urea nitrogen (BUN), decrease in serum creatinine (Sr.Cr.) clearance, proteinuria, etc.

Nephroprotection is a major concern nowadays as renal impairment induced by certain food, toxins, and drugs like gentamicin, for which modern science is trying to explore remedy as conventional systems offer no remedial measures. Thus, it is a need of hour to find possible solutions through alternative systems of medicine. As S. nigrum has properties like antioxidant, anti-inflammatory actions based on the steroidal glycosides and other phytochemicals found in the leaves and berries could be the possible potent remedy for free radical-induced nephrotoxicity 13. Further, Unani medicine also emphasizes the usage of berries of S. nigrum, especially for the treatment of renal disorders, and no scientific studies have yet been undertaken. To verify these claims, the present study was performed on scientific parameters to investigate the possible protective effects of the berries of S. nigrum on gentamicin-induced nephrotoxicity in adult Wistar rats.

Plant Material: Dried berries of Solanum nigrum were purchased from M/S Mohd Hussain and Ajmal Hussain, Khari Baoli, Delhi 110006. Thevoucher specimen of the drug coded FSN-06 has been retained and deposited in the Department of IlmulAdvia (Pharmacology), School of Unani Medical Education and Research (SUMER), Jamia Hamdard, New Delhi. The methanolic extract (ME) of S. nigrum and its fractions such as petrol soluble fraction (PSF), chloroform soluble fraction (CSF), a water-soluble fraction (WSF), and a water-insoluble fraction (WIF) were used in the present study.

Experimental Animals: The experiments were performed in accordance with the guidelines for the care and use of laboratory animals, laid down by the Committee for the Purpose of Control and Supervision of Experiments in Animals (CPCSEA), Ministry of Social Justice and Empowerment, Govt. of India. The animal experiment was approved by the Institutional Animal Ethics Review Committee, Jamia Hamdard, New Delhi. All the experiments were carried out in female albino rats of Wistar strain (150–250 g), supplied by the central animal house facility of Jamia Hamdard, New Delhi (Registration no. 173/CPCSEA). All animals were housed in groups in polypropylene cages and maintained on a standard pellet diet (Amrut laboratory rat and mice feed, New Maharashtra Chakan Oil Mills Ltd., Mumbai) and water ad libitum. The animals were kept under standard laboratory conditions at 25 ± 1 °C temperature.

Drugs and Chemicals: Gentamicin was purchased from German Remedies Ltd., Bombay. All other chemicals and reagents used were of analytical grade.

Preparation of Extracts of Solanum nigrum: The crushed dried fruits of S. nigrum were exhaustively extracted with methanol by using the Soxhlet apparatus. Methanol was recovered by the distillation method under reduced pressure.

Group III to VIII rats were co-administered with gentamicin (100 mg/kg/d) injected subcutaneously from day 4 to day 8.

On 9th day blood samples were collected from the retro-orbital plexus for the estimation of BUN and Sr. Cr.

Statistical Analysis: The data were analyzed using a one-way analysis of variance (ANOVA) followed by Dunnett’s post hoc test. Results of BUN and Sr. Cr. estimation were presented in the form of Mean ±Standard Error, and percentage inhibition by the test drug against nephrotoxins induced changes. Statistical significance was set at P< 0.01.

Effect on BUN and Sr.Cr.: The results of Gentamicin-induced nephrotoxicity study groups are given in Table 1.

TABLE 1: EFFECT OF ME AND ITS FRACTIONS OF PSF, CSF, WSF AND WIF OF S. NIGRUM BERRIES IN GENTAMICIN-INDUCED RENAL DAMAGE

Histopathological Analysis: Haematoxylin and eosin stains (H & E) were examined under a light microscope. Fig. 1 shows normal histology of the kidney tissue of the rats of the control group. The histopathological examination of kidneys in gentamicin-treated rats shows a feature of acute renal necrosis like tubular desquamation along with a number of casts in the tubular lumen, tubular cell dysfunction, morphological damage, impairment of glomerular filtration, and renal blood flow see Fig. 2. 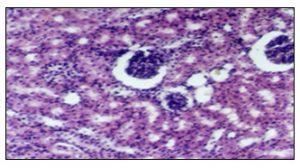 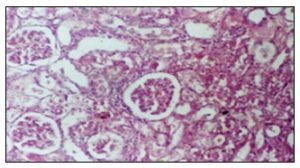 The methanolic extract of Mako (Solanum nigrum) and its fractions PSF, CSF, WSF and WIF are shown in Fig. 3, 4, 5, 6 and 7, respectively and showed normalized the histopathological features of acute tubular necrosis caused by gentamicin in treated groups. 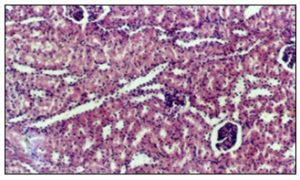 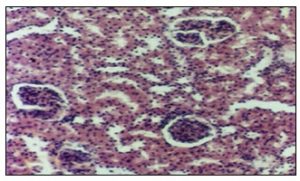 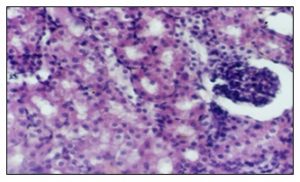 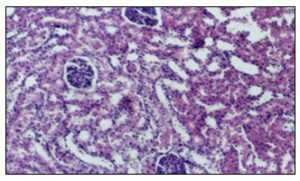 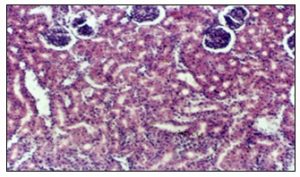 DISCUSSION: In this study, the effect of ME of S. nigrumand its fractions (PSF, CSF, WIF, and WSF) was evaluated in gentamicin-induced nephrotoxicity models. The study was monitored by estimation of BUN, Sr.Cr., and histopathological examination of the kidneys.

Histopathological examination of kidney tissues of rats treated with S. nigrum indicated that the drug had a significant protective effect. ME of S. nigrum, its fractions PSF, CSF, WIF and WSF significantly inhibited glomerular congestion, glomerular infiltration, tissue swelling and tubular necrosis produced by gentamicin induced nephrotoxicity. The effect of hydrophobic fractions (PSF, CSF & WIF) was more effective than hydrophilic fraction (WSF). Phytochemical literature survey revealed that berries of this plant contain steroids and steroidal alkaloids and their glycosides. It is a well-established fact that free steroids and free steroidal alkaloids do not have solubility in the water. Based on this fact, it may be assumed that free steroids / steroidal alkaloids present in the berries of S. nigrum are more active than their glycosides in this study.

CONCLUSION: It has been known since ancient times that the berries of S. nigrum possess therapeutic properties, and meanwhile, people often used its leaves and berries as food. It was revealed that the ME of S. nigrum and its fractions (PSF, CSF, WSF & WIF) significantly reduced the rise of BUN and Sr.Cr. levels caused by gentamicin. It is interesting to note that the effect of hydrophobic fractions (PSF, CSF & WIF) was more pronounced than hydrophilic fraction (WSF). Therefore, it is concluded thatthe berries of S. nigrum have nephroprotective effect in gentamicin-induced nephrotoxicity, and in turn, it justifies the traditional medical claims of Mako (S. nigrum) in renal disorders as mentioned in Unani medicine. However, further exploration is needed to know the exact mechanism of action on kidneys.