Categories Menu
Home » PROTECTIVE EFFECT OF APIGENIN ON 7, 12- DIMETHYLBENZ (A) ANTHRACENE INDUCED GLYCOCONJUGATES IN THE PLASMA AND BUCCAL MUCOSA OF GOLDEN SYRIAN HAMSTERS

PROTECTIVE EFFECT OF APIGENIN ON 7, 12- DIMETHYLBENZ (A) ANTHRACENE INDUCED GLYCOCONJUGATES IN THE PLASMA AND BUCCAL MUCOSA OF GOLDEN SYRIAN HAMSTERS

PROTECTIVE EFFECT OF APIGENIN ON 7, 12- DIMETHYLBENZ (A) ANTHRACENE INDUCED GLYCOCONJUGATES IN THE PLASMA AND BUCCAL MUCOSA OF GOLDEN SYRIAN HAMSTERS

INTRODUCTION: Oral cancer, a diverse group of tumors arising from lip, cheek, floor of the mouth, hard and soft palate, tongue, pharynx and oral cavity, is the fifth most frequent cancer worldwide 1. This disfiguring form of cancer assumes a major health problem in terms of patient’s morbidity and mortality in India and accounts for 40-50% of all cancers. Higher prevalence of oral cancer has been associated with chewing of betel quid containing tobacco, in addition to smoking and alcohol consumption 2.

Cancer of the oral cavity can be prevented by avoiding these risk factors. 7, 12-dimethylbenz (a) anthracene (DMBA), a potent site and organ specific pro-carcinogen, is commonly employed to develop oral cancer in the buccal pouch of golden Syrian hamsters since the precancerous and cancerous lesions as well as biochemical and molecular marker expressions induced by DMBA has marked similarities with human oral cancers 3. It has been reported that chemical carcinogens increase the expression of cell surface glycoconjugates during cell differentiation 4.  DMBA induced cell surface abnormalities has been reported well in several experimental cancers 5. Increased levels of protein bound hexose, hexosamine, fucose and sialic acids were reported in DMBA induced hamster buccal pouch carcinogenesis 6.

Glycoconjugates, carbohydrates covalently linked with other chemical species, consist of glycoproteins, glycopeptides, peptidoglycans, glycolipids, and lipopolysaccharides.  They are involved in biological recognition processes such as cell-cell recognition, cell growth and differentiation and cell-matrix interaction 7. Mammalian cell membrane glycoconjugates have also been associated with tumor progression and metastasis. Glycoproteins, a protein and a carbohydrate, are often important integral membrane proteins where they play a role in cell-cell interactions 8. In recent years, considerable research has been carried out to investigate glycoproteins status in intra - and extracellular fluids due to the fact that they play a significant role in the cellular phenomena that undergo alterations 9.

Analysis of serum or plasma glycoproteins have been used as valuable index in establishing diagnosis, staging of disease, detecting metastases, identifying patients at high risk for recurrence and evaluating therapeutic response 10. Sialic acids, a group of sugars including neuraminic acid and its derivatives, are involved in the regulation of many biological and physiological processes including the regulation of cell surface phenomenon 11. Lipid bound sialic acid is regarded as a biomarker of several cancers including oral cancer. Fucose, an essential sugar for optimal function of cell-cell interactions, play a significant role in tumorigenesis and metastasis 12. Altered glycoconjugates status has been reported in inflammatory and several neoplastic conditions including human oral cancer 10.

Chemicals: The carcinogen, 7, 12-dimethylbenz (a) anthracene (DMBA), was obtained from Sigma–Aldrich Chemical Pvt. Ltd., Bangalore, India. All other chemicals used were of analytical grade, and were purchased from Hi Media Laboratories, Mumbai, India. Apigenin was purchased from Shaanxi Sciphar Biotechnology Co. Ltd., China.

Experimental design: The local institutional animal ethics committee (Registration number 160/1999/ CPCSEA) of Annamalai University approved the experimental design.  Animals were maintained in accordance with the guidelines of ethical committee for animal care of Annamalai University in accordance with Indian National Law on animal care and use. A total of 40 hamsters were randomized into four groups of ten animals in each. Group I animals served as control and were painted with liquid paraffin alone three times a week for 14 weeks on their left buccal pouches.

Groups II and III animals were painted with 0.5% DMBA in liquid paraffin three times a week for 14 weeks on their left buccal pouches. Group II animals received no further treatment. Group III animals were orally given apigenin at a dose of 2.5 mg/kg bw/day, starting one week before exposure to the carcinogen and continued on days alternate to DMBA painting, until the sacrifice of the animals. Group IV animals received oral administration of apigenin alone throughout the experimental period. The experiment was terminated at the end of 16 weeks and all animals were sacrificed by cervical dislocation. Biochemical studies were conducted on plasma, liver and buccal mucosa of control and experimental animals in each group.

Histological studies: Histological investigations were performed on buccal mucosal tissues of the control and experimental animals.  Tissues were fixed in 10 % buffered formalin and routinely processed and embedded with paraffin; 2-3 µm sections were used for histological studies. For detection of glycoconjugates, the tissue sections of buccal mucosa were immersed in a solution of 0.1% periodic acid for 15 minutes, at 50º C. The slides were washed in running tap water and immersed in Schiff’s reagent for 40 minutes. Subsequently, the sections were washed in running tap water for 10 minutes, counterstained with hematoxylin, dehydrated in graded ethanol, cleared in xylene and mounted in resinous medium.

Biochemical Analysis: The precipitate obtained after treating the plasma with 95 % ethanol was used for the estimation of protein bound hexose and hexosamine. The defatted tissues obtained after treating buccal mucosa with methanol and chloroform was used for the estimation of glycoprotein. To the dry defatted tissues remaining after lipid extraction, 0.1N H2SO4 was added and hydrolyzed at 80°C for 1h. It was cooled and the aliquot was used for sialic acid estimation. To the remaining solution, 0.1N sodium hydroxide was added and kept in an ice bath for 1h. From these aliquots, protein bound hexose and fucose were estimated. The protein bound hexose, hexosamine; total sialic acid and fucose were estimated by the methods of Niebes 18, Wagner et al 19, Warren et al 20, and Dische and Shettles 21 respectively. Plasma lipid bound sialic acid level was determined by the method of Katopodis and Stock 22.

Statistical Analysis: The data are expressed as mean ± SD. Statistical comparisons were performed by one-way analysis of variance (ANOVA), followed by Duncan’s Multiple Range Test (DMRT). The results were considered statistically significant if the p values were 0.05 or less. 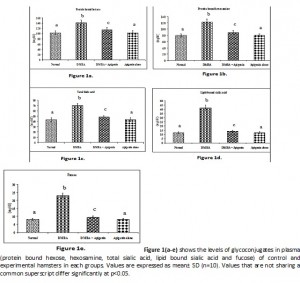 Figure 1(a-e) shows the levels of glycoconjugates in plasma (protein bound hexose, hexosamine, total sialic acid, lipid bound sialic acid and fucose) of control and experimental hamsters in each groups. Values are expressed as mean± SD (n=10). Values that are not sharing a common superscript differ significantly at p<0.05.

Figure 2 (a-c) shows the levels of glycoconjugates in buccal mucosa (protein bound hexose, total sialic acid and fucose) of control and experimental hamsters in each group. Values are expressed as mean± SD (n=10). Values that are not sharing a common superscript differ significantly at p<0.05. 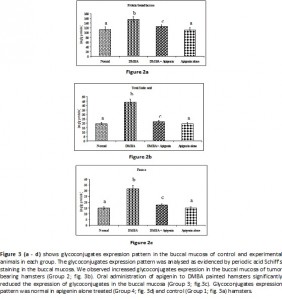 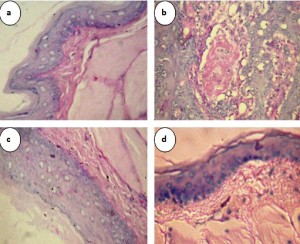 FIG. 3 (A - D) SHOWS GLYCOCONJUGATES EXPRESSION PATTERN IN THE BUCCAL MUCOSA OF CONTROL AND EXPERIMENTAL ANIMALS IN EACH GROUP

DISCUSSION: Tumor markers receiving more attention in early detection as well as predicting prognosis of the cancerous lesions. Cell surface glycoconjugates play an important role function in the regulation of epithelial tissue growth 23. In recent years, considerable reports have been focused on cell surface glycoconjugates as biomarkers of carcinogenesis 24. Tumor associated carbohydrate changes were utilized as diagnostic criteria for human cancers. It has been reported that increased glycoproteins were due to aberrant glycosylation and increased lysosomal hydrolases and proteases activities 10.

Profound studies documented that synthesis of glycoproteins were dramatically increased in tumor cells 25.It has been reported that increased sialyl and glucosyl transferase activities could be responsible for over expression of cell surface glycoconjugates in malignant tumors 26. Malignant tumor in the body stimulated hepatic synthesis of glycoproteins, which subsequently enter into the circulation. Elevated plasma glycoproteins in tumor bearing animals could be related to an increased synthesis in liver or tumor tissues itself with subsequent shedding in to plasma.

Tumor tissue contained almost twice the concentrations of sialic acid, as compared to normal tissues 27. Circulatory total sialic acid and lipid bound sialic acid levels were reflected tumor burden and tumor stages. The increased level of sialic acid with the clinical staging of oral squamous cell carcinoma has been reported 4. Elevated total sialic acids observed in plasma are probably due to shedding or secretion from tumors. Our results lend credibility to these observations. Dramatic changes in the expression of fucosylated oligosaccharides have been observed in cancerous and inflammatory conditions 28. It has been reported that altered fucose metabolism may be indicative of tumor burden. Patients with malignant tumor had significantly higher levels of fucose than healthy persons. Increase in fucose levels were reported in cancer of the breast, leukemia and oral cancer 29.

Increase in fucose levels could be probably related to increased turnover of malignant cells. Our results are in line with these findings. Oral administration of apigenin at a dose of 2.5mg/kg bw restored the status of glycoconjugates in both plasma and buccal mucosa of tumor bearing animals. Our results suggest that apigenin inhibited the metabolic activation of DMBA and thereby suppressed the synthesis of glycoproteins in buccal mucosa during DMBA induced hamster buccal pouch carcinogenesis.