Liver is a major metabolic organ affected by various toxins and chemicals. So  the potential therapeutic agent is needed for the  treatment of liver diseases. Natural products are the best source of remedies for the treatment of  all diseases.The aim of our study was to investigate the effect of leaf extract of Coccinia indica against Alcohol combines with CCl4 and Paracetamol induced hepatotoxicity.The effects of oral treatment with Coccinia indica (CI) leaf extracts (100mg/kg and 200mg/kg  for 7 days) were studied on hepatic damage induced by alcohol (40% alcohol 2.0ml/100g, p.o. for 21 days) and  CCl4 (0.1ml/kg, s.c. on 20th day) and also with paracetamol ( 750mg/kg ip.) in rats.  Biochemical parameters in serum like glutamate oxaloacetate transaminase (SGOT), total Billirubin (TB), Alkaline phosphatase (ALP) and total proteins (TP) were estimated to assess the liver function. Alcohol – CCl4 and paracetamol treatment produced an increase in SGOT, ALP, Total billirubin and decrease in total proteins indicating the liver damage.  These effects were progressively reduced (SGOT, ALP and Total billirubin) and increased (Total proteins) by treatment doses of (100mg/kg and 200mg/kg) CI leaf extracts. These biochemical observations were supplemented by histopathological examination of liver sections. CI leaf extract protected the liver from alcohol-CCl4 and paracetamol induced hepatic damage.

INTRODUCTION: Liver has a pivotal role in regulation of physiological processes. It is involved in several biochemical pathways related to growth, nutrient supply, metabolism, secretion and storage.  Liver diseases are mainly caused by toxic chemicals (certain antibiotics, chemotherapeutics, peroxidised oil, aflatoxin, CCl4, excess consumption of alcohol, high doses of paracetamol and infections).  Nearly 150 phytoconstituents from 101 plants have been claimed to possess liver protecting activity 4, 6. Only a small portion of the hepatoprotective plants as well as formulations used in traditional medicines are pharmacologically evaluated for their efficacy.

Several plants were reported as hepatoprotective against hepatotoxicity in animals.  Some of the polyherbal formulations are verified for their hepatoprotective action against chemical induced liver damage in experimental animals 5, 8.

Although, rats orally fed with alcohol  develop fatty changes in the liver, they do not develop the more severe forms of liver injury seen in humans, namely hepatitis and cirrhosis possibly due to a short life span10 Hence to stimulate the human model CCl4 was included in the study to cause hepatocellular necrosis in alcohol fed rats. Because strong experimental evidence that ethanol may potentiate the hepatotoxic effects of CCl4 18, 21.

Coccinia indica Linn. (CI) (cucurbitaceae) widely distributed throughout India. Different parts of this plant have been reported to exhibit several medicinal properties. Pharmacological properties like anti-inflammatory, anthelmintic and diabetes mellitus 2, 13, 16, 17 have been reported by several workers. Many studies have focused on the hepatoprotective activity of coccinia grandis leaves 12, 14.

To our knowledge no study has investigated the liver protection against Alcohol combines with CCL4 and paracetamol  induced hepatotoxicity in rats.

The present investigation has been designed to study the effect of leaf extract of coccinia indica against Alcohol combines with CCl4 and Paracetamol induced hepatotoxicity.

MATERIALS AND METHODS: The leaves of Coccinia Indica  were collected during the month of march in Chidambaram,Tamilnadu,India The voucher specimen was deposited in the Department of  Botany, Annamalai University, Chidambaram, Tamil Nadu, India. The material was dried in shade, they were powdered and Extracted with methanol. Extract was evaporated under low pressure by using Buchi type evaporator.

Experimental Design: Rats were divided in to six groups, each group consisting of six animals

Biochemical study: At the end of experimental period all the  animals were sacrificed by cervical dislocation. The blood samples were collected by direct cardiac puncture and the serum was used for the assay of marker enzymes viz; Glutamate oxaloacetate transaminase (SGOT) 15, alkaline phosphatase(ALP) 1, total Bilirubin (TB) 11 and total proteins (TP) 9.

Sections made were about 4-6 μm in thickness.  They were stained with hematoxylin and eosin and photographed.

Statistical Analysis: The results are expressed as mean ± SEM of six animals from each group. The statistical analysis was carried out by one way analysis of variance (ANOVA) p values <0.05 were considered significant.

The administration of alcohol-CCl4 to the animals resulted in a marked increase in  total Bilirubin (TB), serum oxaloacetate transaminase (SGOT) and serum alkaline phosphatase (ALP) activities, However, the serum total protein level was decreased indicating the liver injury,Whereas animal treated with   100mg/kg and 200mg/kg CI extracts exhibited a decrease in total bilirubin,serum oxaloacetate transaminase and alkaline phosphatase along with significant increase in total protein activities.  The effect was only marginal at a dose of 100mg/kg whereas at 200mg/kg the extract effectively prevented Alcohol-CCl4 induced hepatotoxicity. The results were presented in table 1. 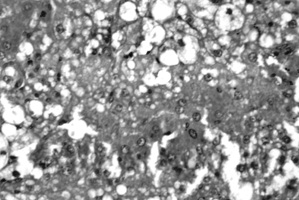 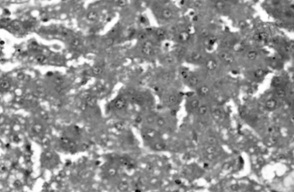 For the animals given the extract (200 mg/kg), the levels of these enzymes and total protein were relatively normal when compared with Paracetamol treated group .The results were presented in table 2.

Paracetamol administration caused necrosis of the centrilobular hepatocytes characterized by nuclear pyknosis and eosinophillic cytoplasm (Figure 3) and the protective effect of Coccinia indica (200 mg/kg) was confirmed by Histopathological examination (Figure 4). 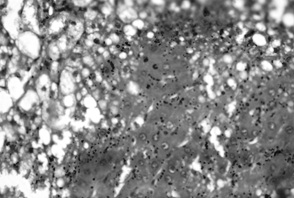 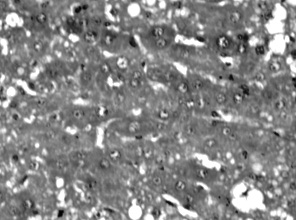 DISCUSSION: Alcohol pretreatment stimulates the toxicity of CCl4 due to increased production of toxic reactive metabolites of CCl4, namely trichloromethyl free radical by the microsomal mixed function oxidase system. This activated radical binds covalently to the macromolecules and induces peroxidative degradation of membrane lipids of endoplasmic reticulum rich in poly unsaturated fatty acids. This peroxidative degradation of biomembranes is the principle cause of hepatotoxicity. This is evidenced by an elevation in the serum maker enzymes namely SGOT, ALP and TB and reduction in the serum TP. CI extract has decreased the level of serum marker enzymes namely SGOT, ALP, Bilurubin and increased the level of proteins which indicates hepatoprotective activity.

Paracetamol causes hepatic necrosis when administered in large quantities. It has been shown that its toxic metabolite N-acetyl-p-benzoquinone imine covaiently binds to hepatic proteins after the cellular glutathione  has been depleted. Sorne of these proteins have been shown to be mitochondrial proteins. possibly involved in oxidative phosphorylation. Hence, it has been suggested that the mitochondrion is a target of Paracetamol –induced  hepatotoxicity 19, 20.

The paracetamol induced hepatotoxicity was controlled in CI extract treated groups  indicated that the CI extract helped to resist the damage caused by paracetamol.

In order to provide a better understanding of the possible role of the extract of Coccinia indica leaves  in the hepatoprotective effect observed in this study, we carried out a preliminary phytochemical screening of the extract of the leaves and found it to contain flavonoids.

Earlier report indicated that the flavonoids are phenolic compounds exert multiple biological effects,including antioxidant properties and free radical scavenging abilities. So the hepatoprotective activity of the extract may be due to its antioxidant property exerted by flavanoids in the leaves. These results of our study indicate that treatment with CI extract protectected the liver against Alcohol-CCl4 and paracetamol induced hepatotoxicity.