ABSTRACT: Cadmium can cause various health problems even at low concentrations by inducing oxidative damage in tissues of organisms. Nowadays, the focus has been raised toward the use of herbal treatment against heavy metal toxicity. Hence, the present research work was aimed to investigate the protective effect of curcumin against Cd-induced toxicity in the auricles and ventricles of the heart in albino mice. Mice were equally divided into 8 groups, with 5 mice in every group. The experiment was performed in two intervals of for 15 and 45 days. Mice were divided into the following groups: control, CdCl2 (1mg/kg bw of Cd daily), CdCl2+Curcumin (1mg/kg bw of Cd daily+100 mg/kg bw of Curcumin on alternate days), and Curcumin (100 mg/kg bw of Curcumin on alternate days) and then marked as group 1, 2, 3 and 4 for 15 days and group 5, 6, 7 and 8 for 45 days interval. Animals were sacrificed after 15 and 45 days of treatment. The biochemical analysis depicts the generation of oxidative stress with the increased level of lipid peroxidation and decreased activity of antioxidant enzymes, i.e., superoxide dismutase, catalase, and glutathione peroxidase. Whereas, Curcumin administration improved the level of malondialdehyde and oxidative stress in heart (auricles and ventricles) tissue by its antioxidant activity. Also, the cotreatment of CdCl2 and Curcumin ameliorated the activity of antioxidant system. From the above results, it can be concluded that Curcumin showed the protective action against CdCl2 -induced oxidative damage in the heart of mice.

INTRODUCTION: Cd has a valency of +2. Its solubility and color depend upon its existence with various inorganic salts. Hydroxide, carbonate, oxide, and sulfide salts of cadmium are generally insoluble in water, whereas fluoride, chloride, iodide, sulphate, and nitrate are comparatively soluble in water 1, 2.

Cd, like other toxic heavy metals (As, Pb, Hg) does not have a physiological function, and so it is time and again regarded a toxicant 3-5. Cd threatens human health through direct or indirect exposure and is retained in the body for longer periods of time 6. The half-life of Cd is considered to be 10-30 years 7, 8.

Tissue damage is inevitable when there is an imbalance in the ROS production and antioxidant enzymes like superoxide dismutase (SOD), catalase (CAT), glutathione peroxidase (GPx), or reduced GSH. Long-term exposure to cadmium enhances lipid peroxidation. Increased lipid peroxidation then interferes with the antioxidant defense system and generates oxidative stress with cadmium 10. Cd toxicity leads to many disturbances in proteins, lipids, and DNA 11.

Curcumin (Cur) has a long history of medicinal use in India and Southeast Asia, and for hundreds of years, it has been formed an important component of the Indian diet 16. According to World Health Organization (WHO) approximately 80% of the population in developing countries rely on traditionally used medicinal plants for their foremost wellness 17.

Curcumin (diferuloylmethane) is an active, yellow-colored component obtained from rhizomes of turmeric, Curcuma longa Linn. (family Zingibe-racea). It is a perennial herb found mostly in tropical and subtropical regions of the world. Fat-soluble polyphenolic pigments, also called curcuminoids are mainly responsible for the yellow color of Curcumin 18.

The scavenging and trapping potential of Curcumin can be attributed to their chain-breaking activity by donating hydrogen atoms, probably from their phenol (OH) groups. Thus, curcumin affords protection against oxidative agents in the brain, liver, lungs, kidneys, and heart 19.

Animals: Albino mice of weight 20-22 g were obtained from Central Research Institute, Kasauli. They were kept for acclimatization for 10-15 days and given standard mice feed and ad libitum access to RO water. The animals were handled with proper human care in accordance with the guidelines of the Institutional Animal Ethical Committee under the approval number (107/99/ CPCSEA/2014-32). Cd chloride (CdCl2) and Curcumin were purchased from HiMedia Laboratories Pvt., Ltd., Mumbai. CdCl2 and Curcumin were dissolved in distilled water and were administered to mice orally.

Experimental Design: Mice were equally divided into 8 groups, with 5 mice in every group. The experiment was performed in two intervals for 15 and 45 days. Mice were divided into the following groups: control, CdCl2 (1mg/kg bw of Cd daily), CdCl2+Curcumin (1mg/kg bw of Cd daily+100 mg/kg bw of Curcumin on alternate days), and Curcumin (100 mg/kg bw of Curcumin on alternate days) and then marked as group 1, 2,  3 and 4 for 15 days and group 5, 6, 7 and 8 for 45 days interval. Animals were sacrificed after 15 and 45 days of treatment. All control and treated animals were sacrificed, the heart was removed, freed of adipose tissue, blotted dry, and were processed for biochemical analysis.

Biochemical Studies: The heart was then separated into auricles and ventricles regions, and then separate homogenates were prepared of auricles and ventricles with the help of tissue homogenizer in 3 ml of phosphate buffer and used for biochemical estimation. Table 1 is showing methods used for the estimation of lipid peroxidation, SOD, CAT, and GPx.

Statistical analysis: The data were analyzed using the Student’s t-test and two-way ANOVA.

Auricle: After 15 and 45 days of treatment, CAT activity was significantly decreased in group II, III (p<0.0001), IV, VI and group VII whereas, a non-significant (p>0.05) increase in CAT activity in group VIII was observed in comparison to control group Fig. 5. 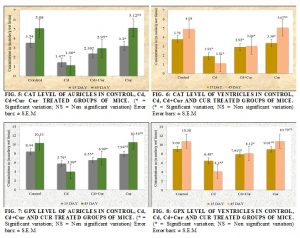 Lipid Peroxidation: MDA is the main product of lipid peroxidation and it has been strongly correlated with the oxidative damage in tissues 24. In the present study, a significant increase in the level of MDA in tissue extracts of heart (auricles and ventricles) was observed in Cd-treated groups II and VI Fig. 1 and 2. These results are in confirmation with the studies of some other researchers who found enhanced lipid peroxidation due to Cd toxicity in other tissues also 25, 26.

Wang et al., 14 attributed the various abnormalities occurring in the cardiovascular system to the accumulation of semi ubiquinone’s at site Q0 and inhibits mitochondrial complex III activity. Further, it leads to the generation of ROS due to Cd toxicity. These results are also supported by other authors 27, 26. It is also known that Cd accelerates free radical generation by increasing intracellular calcium levels, thus causing lipid peroxidation 28. Previously, Casolino et al., 29 hypothesized that Cd exposure replaces iron (Fe), hence increasing free Fe, which produces toxic hydroxyl radicals through Fenton reaction and leads to the production of lipid peroxidation and oxidative stress.

In the present study, Cur administration decreases the level of lipid peroxidation in auricles and ventricles of group III, IV, VII, and VIII in comparison to group II and VI Fig. 1 and 2. These findings are in agreement with the work of other authors 30, 31. Similarly, Soto-Urquieta et al., 32 suggested that Cur may decrease the free radicals generation or eliminates prooxidant molecules and hence decreases the enhanced lipid peroxidation level in tissues. It was also demonstrated that the antioxidants scavenge ROS, bind with metal ions, and inhibit oxidative damage 33. Phenolic and β-diketone functional groups, as well as the methoxy group of Cur, are responsible for free radical scavenging properties 34.

Antioxidant Enzymes: Oxidative damage is generated due to Cd toxicity 35 and the production of ROS that is generally balanced by the antioxidant enzymatic (SOD, CAT, GPx) and non-enzymatic (GSH, vitamin C, vitamin E) antioxidative barriers 36, 37 get diminished due to its toxic effects in the body. Antioxidant enzymes repress or check the free radicals generation in cells. Superoxide dismutase (SOD), catalase (CAT), and glutathione peroxidase (GPx) serve as the first line of defense against oxidative damage to the cells 38. SOD converts superoxide radicals to hydrogen peroxide, while CAT and GPx are the antioxidant enzymes responsible for the conversion of hydrogen peroxide to water and oxygen 39.

SOD is one of the important antioxidant enzymes, which is a biological marker of oxidative stress40. In the present study, a significant decrease in SOD activity was observed in Cd-treated groups II and VI in comparison to control groups I and V Fig. 3 and 4. These results are in accordance with the previous studies 41. According to Jamakala and Rani 42 excess generation of ROS inhibit the activity of SOD which could be the reason for its decreased level in the present study. Further, it may cause many detrimental effects by accumulation of superoxide radicals as reported by Nagaraj et al. 43

As SOD is a metalloenzyme; its reduced activity may be due to dysfunctional conformational change because of the replacement of Zn2+ and Cu2+ present in SOD by Cd 44, 45. Amara et al., 46 also reported a decreased level of SOD due to Cd toxicity in the heart and skeletal muscle of the rat.

In the present study, Cd significantly decreased the CAT activity in auricles and ventricles in groups II and VI in comparison to control groups I and V Fig. 5 and 6. This decline in CAT activity might be due to high ROS generation and their accumulation inside the subcellular structures, which causes damage to antioxidant defense system and ultimately leads to tissue injury 47.

According to Casalino et al., 48 Cd binds to the active site of catalase enzyme causing its reduction and decrease in its activity. Moreover, some studies have described that superoxide radicals could also inhibit catalase activity, and the elevated hydrogen peroxide level resulting from catalase inhibition could eventually inhibit SOD activity 49, 50.

In the present research work, glutathione peroxidase activity was also found to be decreased in groups II and VI in comparison to control groups I and V Fig. 7 and 8 in the heart (auricles and ventricles). These results are in agreement with the findings of Karaca and Eraslan 51.

In the present research work, Cur administration increased the activities of SOD, CAT, and GPx in groups III, IV, VII, and VIII in auricles and ventricles in comparison to Cd treated group II and VI (Fig. 4-9). Abo-Salem et al., 52 observed that Cur administration normalizes the antioxidant status (SOD, CAT, GST) in the heart of rats. Similar results are also reported by some other workers 53, 54.

CONCLUSION: Based on the above-explained data, we conclude that Cd is a toxic chemical that caused significant toxic effects in the heart (auricle and ventricle) of treated mice, as revealed by the severely affected parameters. On the other hand, this investigation showed the protective and/or ameliorative role played by curcumin as it normalizes the biochemical parameters disturbance caused by Cd. With the above results, it can be concluded that exposure to Cd or any other heavy metal leads to many physiological dysfunctions related to cardiac issues due to the generation of oxidative stress by Cd exposure. But with the involvement of herbal things in our daily diet like Curcumin, one can be prevented from the damaging effect of heavy metals, which we are taking unknowingly through the air, water, and soil.

ACKNOWLEDGEMENT: The authors gratefully acknowledge the facilities provided by the Department of Zoology and Environmental Sciences, Punjabi University, Patiala, Punjab, India, to pursue the research work and also the Institutional Ethical Committee for permitting to work on mice.

AUTHORS FUNDING: The financial aid extended by UGC in the form of the Rajiv Gandhi National Fellowship for minority students is greatly appreciated.

CONFLICTS OF INTEREST: The author declares that there are no conflicts of interest regarding the publication of this paper.

AUTHORS CONTRIBUTION: Both the authors have contributed equally.