ABSTRACT: The living organisms of the aquatic ecosystem have been directly affected by the accumulation of the heavy metals in the aquatic environment 1. Fishes are very good biosensors of aquatic contaminants and as bio-indicator species respond with great sensitivity to changes in the aquatic environment. Copper will accumulate in many different organs in fish and mollusks. In the present study the acute toxicity of copper sulphate was analyzed by the exposure of the copper sulphate to the fresh water fish Grass carp (ctenopharyngodon idella) in the concentration of (3ppm/l for 15 days). The vital organs like Gill, Liver, and muscle tissues showed pronounced effect on the activity of enzymes. Copper sulphate administration decreases the activity of the antioxidants SOD (superoxide dismutase), and CAT (catalase), and the activity of the enzymes GPx (Glutathione peroxidase), GR (Glutathione reductase), GSH (Reduced Glutathione) to the significant level in all the tissues. The level of Lipid peroxidation (LPO) was increased in all the tissues compared to the control group. The decreased activity of antioxidants may indicates the presence of reactive oxygen species which induces peroxidation. The study suggested that the presence of toxic heavy metals like copper sulphate in the aquatic environment has strong influence on the antioxidant in the fresh water fish (Ctenopharyngodon idella). The activity of the antioxidants were reversed nearly to the normal levels significantly after the treatment with Raphanus Sativus leaves extract with the concentration of 250mg/l for 15 days.

INTRODUCTION: The aquatic ecosystem is contaminated by variety of pollutants, mainly by the effluents discharged from industries, sewage treatment plants and drainage from urban and agricultural areas. The organisms of the aquatic system are affected by these pollutants 2 3. The remarkable raise in the use of heavy metals over the last few decades has anticipated results in the metabolites in the aquatic environment 4.

Now days the fresh water in the aquatic system has been highly contaminated by the exposure of wide range of pollutants released from domestic, industrial, mining and agricultural effluents 5. The major source of metal pollution is constituted by the industrial wastes in the natural water 6. Mainly the heavy metals are consumed and accumulated in the aquatic species that live close to the coastline 7. Growth is a sensitive and reliable endpoint in chronic toxicological investigations 8. Most of the elements wield their toxic effect by producing oxidative toxicity like reactive oxygen species (ROS), or carcinogenic in nature and fake a threat to the creature and the environment 9, 10.  In the process of evolution, the living organisms requires oxygen for their metabolism and growth but equally dangerous to the macromolecules due to their toxic effect 11. The objective of the study was to assess the copper sulphate induced toxicity and the protective effect of Raphanus Sativus in the fish Grass carp (Ctenopharyngodon idella) in the gills, liver and muscles of the specimens.

The live specimens of adult fresh water fish Grass carp (Ctenopharyngodon idella), both sexes, body weight 15-50g were collected from the pond water located at the Karayamputhoor area in Cuddalore district and used as the test animals. They were acclimatized to the laboratory condition for few days in plastic fish tanks (15-25cm in length, 15-50g of body weight). Physiochemical characteristics of the tap water used in this experiment were temperature at 26ºC and pH-7. The toxicant was dissolved in distilled water and mixed well in the fish tank. The tanks were provided with continuous aeration and were maintained under light-dark (12:12 hrs) cycle. During acclimatization, the fishes were fed with commercial pelleted food for 2-8 times per day. The water concentration of the toxic substance was renewed after 15 days.

Fresh radish leaves were collected, sun -dried & grounded to fine powder, using the coffee mill attachment of a moulinex domestic food blender. The powder was kept in desiccators for later use. The aqueous extract of radish leaves powder was prepared by dissolving 250mg/l of distilled water and then introduced directly in to the tanks in a single dose.

RESULTS AND DISCUSSION: Despite the essential role of copper in a number of vital biochemical processes, the metal is known to induce several histopathological and biochemical changes in gills and other organs when present in the higher concentration in water. In animals the biochemical and morphological alterations occurs in the organs through the generation of free radicals by the accumulation of Copper in water bodies. The results of various parameters investigated in the present study have been presented in Fig.1 to Fig.6. As it is evident from the figures, copper sulphate administration decreased the activity of antioxidants such as CAT, SOD and the enzymes GPx, GR and GSH significantly and the level of Lipid peroxidation (LPO) was significantly increased in all the tissues compared to the control group. The activities of these parameters were reversed nearly to the normal levels significantly after the treatment with radish leaves extract. 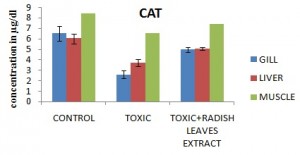 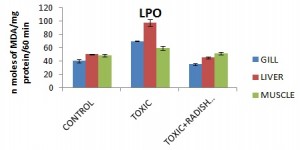 Catalase (CAT) acts on the hydrogen peroxide converting them to harmless molecules 18. It has been observed that the activity of catalase decreased in liver & gill of fish fly ash leach ate (FAL) by the exposure of Channa punctata (Cyprinous carpio) 19. Similar results has been observed in the activity of catalase (CAT), in the liver of uranium exposed Juvenile rainbow trout. The liver is an organ that performs various functions associated with the metabolism of xenobiotics 20. Hepatocytes like other cells are dependent on antioxidant enzymes for the protection against reactive oxygen species produced during the bio transformation of xenobiotics 21. Among the enzymes that comprise this defense system are SOD and CAT. SOD is responsible for the removal of hydrogen peroxide which is metabolized to oxygen and water 22.

Cell membranes are phospholipid bilayers with extrinsic proteins and are the direct target of lipid peroxidation which leads to a number of deleterious effects such as increased membrane rigidity, osmotic fragility, cell membrane destruction and cell damage. Lipid peroxidation is thought to be an important mechanism of liver injury and malondialdehyde (MDA) or TBARS is one of its end products, which is generated during the oxidative degradation of lipids. The liver is noted as a site of multiple oxidative reactions and maximum free radical generation 25. Lipid peroxidation in vivo has been identified as one of the basic deteriorative reactions in cellular mechanisms of pesticide-induced oxidative stress in freshwater fishes.  LPO has also been used to measure xenobiotic-induced oxidative stresses, which were originally defined as the disequilibrium between pro-oxidants and antioxidants in biological systems.

The depletion of cellular sulfhydryl reserves seems to be an important indirect mechanism for oxidative stress induced by redox inactive metals. Our findings are in consistent with other published reports which quoted that GSH concentration decreased during copper sulpate intoxication.

Glutathione is an important biomolecule react against chemically induced toxicity and can participate in the elimination of reactive intermediates by reduction of hydro peroxides in the presence GPx. GSH also functions as free radical scavenger and in the repair of radical biological damage 26. Decreased levels in diabetes have been considered to be an indicator of increased oxidative stress 27. GPx & GR plays a pivotal role in H2O2 catabolism and in the detoxification of endogenous metabolic peroxides and hydro peroxides which catalyses GSH 28. Decreased activity of GPx & GR may result from radical induced inactivation and glycation of the enzymes 29.

CONCLUSION: In the present study we have observed , the  activity of CAT, SOD, GPx, GR, GSH, was decreased significantly in gill followed by liver and muscle may indicates the degeneration of the cell organelles. Such damage to cell organelles has been reported in various studies. Furthermore, accumulation of copper sulphate in liver and muscle could be a possible reason for varying the enzyme activities. The level of LPO was increased significantly in all the tissues.

Radish leaves would improve the immunity power as it is a vitamin C rich vegetable. Use of radish would thus make equipped to fight against cold, fever and other infection. Radish would help to develop immunity against different types of diseases. After the treatment with radish leaves all the biochemical parameters were reversed to the normal value significantly. The results of this study establish, the copper sulphate toxicity may induce the alterations in the biochemical parameters which could be reversed nearly to the normal level after the treatment with the radish leaves extract.

ACKNOWLEDGEMENT: The authors are grateful to the authorities of St. Joseph’s college of Arts and Science, Cuddalore for providing all facilities and encouragement to carry out the research work.