INTRODUCTION: Diabetic neuropathic pain is one of the most recognized most difficult types of pain, which is a symptom of diabetic neuropathy (DN). DN is the microvascular complication associated with diabetes 1. Peripheral nerve injury is associated with neuropathic pain and is characterized by the sensory abnormalities such as unpleasant abnormal sensation (dysesthesia), an increased response to painful stimuli (hyperalgesia), and pain in response to a stimulus that does not normally provoke pain (allodynia) 2. The various proposed mechanism which leads to pathogenesis of diabetic neuropathy is activated polyol pathway 3, AGE’s formation 4, PKC activation 5, and Hexosamine pathway 6.

Hyperglycemia is the primary culprit for diabetic neuropathy. There have been major advances in the control of hyperglycemia (diabetes), through dietary changes, hypoglycemic agents, insulin and islet transplantation, even though the long-term complication of diabetes, such as neuropathy remains a serious problem. Although, the oxidative stress is a major determinant in diabetic complications including diabetic neuropathy, which is a result of cross-links between above pathways, which was proposed by several, studies 6, 7, 8. Therefore, agents or compounds that exert multiple actions, such as antioxidant, antidiabetic/ hypoglycemic, AR inhibitory, and antiglycation properties, could be more effective than agents with a single action.

Coccinia grandis, the ivy guard, of the family Cucurbitaceae is distributed in tropical Asia, Africa and is commonly found in India, Bangladesh, and Srilanka. Since, long before the leaves are consumed to control of hyperglycemia as an indigenous system of medicine. Aqueous fractions significantly inhibited inflammation, which can be thought to possess antiproliferative and antiarthritic activities similar to cyclooxygenase inhibitor 12. Every part of this plant is valuable in medicine, and various preparations have been mention in indigenous system of medicine for various skin diseases, bronchial catarrh, bronchitis and Unani systems of medicine for ringworm, psoriasis, smallpox, and scabies and other itchy skin eruptions and ulcers 13. The leaves of this species are widely used in Indian folk medicine for reducing the amount of sugar in the urine of patients suffering from diabetes mellitus. Literature suggests the use of this plant in the treatment of diabetes 14.

Plant Material and Extraction: The fresh leaves of Coccinia grandis were collected locally. Leaves were then shade dried at room temperature. The dry material was coarsely pulverized to powdered form. The powder was extracted with boiling water, and ethanol using rotary evaporator, and the crude extracted was used for an experiment. A voucher specimen (No. 018) was deposited at Department of Botany, University College of Science, Osmania University, Hyderabad-500007.

Animals: Adult male albino rats of Wistar strain (NIN) aged 11–12 weeks (100-200g wt.,) obtained from National center for laboratory animal sciences, NIN, Hyderabad were used. The animals were housed in plastic cages, which were maintained in the climate-controlled animal facility (Department of Zoology, Osmania University, Hyderabad) with a 12-h light/12 h dark cycle at a stable temperature 18-22 ◦C with standard pellet diet (NIN) and water ad libitum. All experiments involving animals were conducted according to guidelines of the Institutional Animal Ethics Committee (CPCSEA No: 383/01/a/ CPCSE).

Experimental Design: The animals were divided into five groups, each containing six animals each.

Nerve perfused with mammalian ringer solution to prevent the drying of tissue. The electrodes place at two sites of the sciatic nerve; one is placed at the site of injury (for recording) another placed near the ischium or just proximal to the injury site (stimulator). The setup is ready for recording. The nerve conduction velocity (NCV) was calculated by the ratio distance between the two sites of stimulation in mm divided by the difference between proximal and distal latencies in ms, giving a value for NCV in meters per second (m/s) 18.

Preparation of Tissue Extracts: The animals were sacrificed by cervical dislocation after the 21st day, and sciatic nerves carefully dissected out avoiding extraneous tissue, washed with normal saline, blotted dry, the nerves were immediately transferred and kept at 80 ºC to be used later.10% tissue (sciatic nerve) homogenate was prepared in 50mM potassium phosphate buffer pH 7.2 and centrifuged at 25,000g for 30 min at 4°C and the supernatant is used for Aldose reductase (AR) activity.

Estimation of Aldose Reductase (AR, EC.1.1.1.21): The oxidation of NADPH is measured as an index of Aldose reductase activity by Hayman and Kinoshita 19.

RESULTS: The body weight, serum glucose levels, and protein carbonyls of all the experimental groups with diabetes are shown in Fig. 1, Fig. 2 and Fig. 3. The body weights of STZ induced diabetic rats were found to be reducing throughout the study. 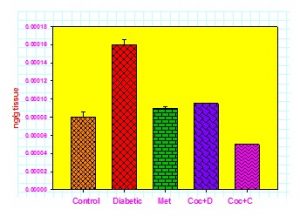 However, the percentage changes in body weights of metformin-treated and Coccinia grandis leaf extract treated diabetic rats were not significantly different compared to the diabetic control rats. Blood glucose levels were persistently high STZ-induced diabetes in rats (169%) in comparison to the control group, which was restored to 43% in metformin-treated animals and 43% in Coccinia grandis leaf extract treated animals. Levels of protein carbonyls an important marker of the long-term AGE’s state was found to be significantly elevated in short-term (p<0.05) diabetic animals compared to control. The protein carbonyls levels in the Met group were found significantly nearer to the control group, and that of Coc+D is -42% compared to the control group.

Measurement of Antinociceptive Activity: At the end of the 3rd week, the nociceptive threshold was significantly lower in diabetic rats from non-noxious stimuli as compared to control Fig. 4.

Treatment with Coccinia grandis by the end of 3rd week significantly increased the pain threshold in allodynia test. The rotarod latencies of all experimental rats are shown in Fig. 5.

Coccinia grandis leaf extract treatment of diabetic rats (Coc+D) resulted in -14% lower NCV compared to control. However, the NCV of diabetic rats treated with metformin (met) was -22% lower than control. 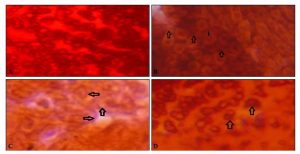 FIG. 9: PHOTOMICROGRAPHS SHOWING THE TRANSVERSE SECTIONS OF THE SCIATIC NERVES. Fig. A is of Control rat (5µm thick, 100X+Immersion oil) showing normal histological features with thick myelin membrane. B is the photomicrograph of T.S of Sciatic nerve of STZ-induced diabetic rat, showing axonal atrophy (swelling), and Increased extra-axonal space among nerve fibers (↑), deposition of electron-dense material within the axons.  In Fig.C STZ-induced diabetic rats treated with metformin showed onion bulb formation (→) and also segmental demyelination. STZ-induced diabetic rats treated with Curcumin (Cur+D) are shown in Fig.D, no demyelination, and no onion bulb formation is seen, and also myelin membrane is intact (↑). Control animals treated with Curcumin have not shown any significant histological changes (Fig not shown).

After simultaneous treatment, Coccinia grandis leaf extract the serum glucose levels were decreased significantly. And the antidiabetic activity of Coccinia grandis may be due to various steps which result in the increased glucose tolerance. Reduction of sugar absorption from the gut increased insulin production from the pancreas, reduction of the release of glucose from the liver, increasing glucose uptake by fat and muscle cells are probable mechanisms which may be involved 24.

Neuropathic pain associated with peripheral nerve injury is characterized by the sensory abnormalities such as unpleasant abnormal sensation (dysesthesia), an increased response to painful stimuli (hyperalgesia), and pain in response to a stimulus that does not normally provoke pain (allodynia) 25. Spontaneously diabetic mice with hyperglycemia have shown a decreased sensitivity to the antinociceptive effects of morphine 26. The behavioral alterations start on the 3rd day after STZ-induced diabetes in rats and last throughout the experimental period showing hyperalgesia. These observations were reported earlier findings 27, 28.

In the present study, STZ-induced diabetic rat group has shown, a significant increase in hind paw cumulative withdrawal latencies in allodynia response showing hyperalgesia. Administration of Metformin and Coccinia grandis resulted in consequent decrease was observed in allodynia response, compared to diabetic rats suggesting a reduction of hyperalgesic condition. The antinociceptive effect of Coccinia grandis may be attributed to its powerful antioxidant activity. Coccinia grandis leaf extract treatments were efficacious in reversing and preventing impairment of normal motor function as assessed on the Roto rod. These behavioral abnormalities are hypothesized to be a consequence of the irregularities and variability in muscle spindle group Ia innervation.

Neuropathic pain is characterized by decreased nerve conduction velocities. The change in microenvironment of the nerve involving metabolic and vascular processes have been proposed, that is leading to early reductions in nerve conduction velocities 29. Further slowing of nerve conduction velocity may be due to structural changes. The key findings of the present study were to report that Coccinia grandis leaf extract has prevented diabetes-induced deficit in NCV. This protection occurred in line with that of obvious alteration in the biochemical indexes measured, which included Na+-K+-ATPase activity and polyol pathway enzyme such as AR. Altered polyol metabolism and an associated decrease in neuronal myo-inositol content were reported to be associated with diabetes 30.

This finding suggests that lower tissue myo-inositol concentrations may result in abnormal neuronal Na+-K+-ATPase activity through a reduction in the formation of diacylglycerols and inositol trisphosphate and incomplete activation of the sodium pump by activated protein kinase C 31. Lower Na+-K+ ATPase activity may underpin the depressed NCV in diabetes. Also, inhibition of aldose reductase has been reported to restore neuronal polyol metabolite content (principally the myo-inositol) and the nerve conduction deficit in diabetes.

In the present study, Coccinia grandis leaf extract treatment ameliorates diabetes-associated changes in Na+-K+ ATPase and NCV. These effects were associated with attenuated anatomical damage and preventive effect on the bimodal distribution of myelinated fiber diameters. The improved NCV was strongly correlated with Na+-K+ ATPase.

CONCLUSION: In conclusion, data from the present study show that Coccinia exhibited antinociceptive action. There is a significant decrease in levels of AR, Na+-K+ ATPase treated groups indicating the protective role of Coccinia against STZ induced alignments, could be beneficial in preventing the progression of diabetic neuropathy. Further studies are anticipated for phytochemical investigations to isolate the active compounds and lead to their further clinical use.