INTRODUCTION: Cholestasis is a condition where bile cannot flow from the liver to the duodenum 1. Estrogens are well known to cause intrahepatic cholestasis in susceptible women during pregnancy, administration of oral contraceptives, and postmenopausal replacement therapy 2. Given these clinical implications, experimental cholestasis induced by estrogen administration in rodents, mainly 17-ethynylestradiol (EE), has been widely used as an experimental model to assess the mechanisms involved in estrogen-induced Cholestasis 3. Hussein 2013, has shown that estrogens induce cholestasis by reducing both the bile-salt–dependent fraction of the bile flow (BSDF) and the bile-salt–independent fraction of the bile flow (BSIF) 4.

The model in rats, however, requires estrogen dosages much greater than those required to induce cholestasis in susceptible women 5. In the clinical situation, intrahepatic cholestasis has a range of causes, including drug or xenobiotic toxicity, viral or bacterial infection, as a complication of pregnancy, and liver transplantation 6. Ethinylestradiol (EE), a synthetic estrogen, induces intrahepatic cholestasis that is characterized by reducing the liver’s capacity to excrete bile salts and organic solutes 7. EE was commonly used to study the mechanisms of cholestasis 8.

Cholestasis produces biochemical changes, oxidative stress, and inflammation 9. Therefore, new strategies to prevent cholestasis-induced liver injury and fibrosis are needed. Previous studies suggested that oxidative stress occurred during cholestasis and likely played a role in cholestasis-induced liver injury 10-13. Many plant products have been shown to have significant antioxidant activity 13, which may be an important property of medicinal plants associated with the treatment of several ill-fated diseases, including cholestasis 14. The most widely distributed polyphenolic compounds in plant tissues are hydroxycinnamic acids (HCAs) 15. Some of the most common naturally occurring HCAs are p-coumaric acid, ferulic acid, sinapic acid, and caffeic acid.

Their biological effects are strongly dependent on the number and position of hydroxyl groups 16. Ferulic acid is an important biological and structural component of the plant cell wall 17. Due to their ability to stop radical chain reactions by resonance followed by polymerization, ferulic acid offers protection against UV-radiation and is responsible for cross-linking polysaccharides and other cell wall polymers 18.

The antioxidant activity of ferulic and coumaric acids has been reported for scavenging NO, O2- and –OH 19. Ferulic acid also has a hepatoprotective effect against toxicity induced in vivo by carbon tetrachloride 20. It is also recognized that ferulic acid exhibits a variety of physiological functions such as suppression of Alzheimer’s disease 21, prevention of muscular fatigue 22, improvement in hypertension 23, and antitumor activity of breast, liver, and colon 24 - 26. The aims of the present study were to assay the preventive and therapeutic potential of ferulic acid on rat hepatic cholestasis induced by EE and to elicit the role of antioxidant effect.

Chemicals: EE was obtained from Sigma Chemical Co. (St. Louis, MO, USA). Ferulic acid was purchased from Nutrabio Co. (Middlesex, NJ, USA). All other chemicals used in this study were of the analytical grade, preserved under standard situation, and were provided from standard commercial suppliers. Propylene glycol was produced by Panreac Quimica, SA (Barcelona, Spain).

Animals: This experiment was conducted in accordance with guidelines established by the Animal Care and Use Committee of October 6 University. Adult female albino rats weighing around 200±20 g were purchased from the Faculty of Veterinary Medicine, Cairo University (Cairo, Egypt). They were individually housed in cages in an air-conditioned room with a temperature of 23±2 oC, a relative humidity of 60%, and an 8:00 a.m. to 8:00 p.m. light cycle. During the acclimatization period, each animal was raised on a regular diet (Dyets, Inc., Bethlehem, PA, USA) ad libitum.

Experimental setup: This experiment was carried out to examine the prophylactic effect of ferulic acid against EE-induced liver cholestasis. The animals were divided into six groups with eight animals in each.

Group I: Normal control (was given 0.5ml of propylene glycol)

Group III:  was given EE subcutaneously (100 µg/kg b.w.) suspended in propylene glycol in a single daily dose for 5 days of the experimental period 28.

Histological assessment: Livers from rats of different groups were fixed in 10% neutral formalin solution, dehydrated in graded alcohol and embedded in paraffin. Fine sections obtained were mounted on glass slides and counter-stained with Hematoxylin and Eosin (H&E) for light microscopic analyses according to the method of Bancroft and Steven 44. The slides were coded and were examined by a histopathologist who was ignorant about the treatment groups after which photographs were taken.

Statistical analysis: The results were expressed as mean ± SD for eight separate determinations. All the data were statistically evaluated with SPSS/15 Software 45. Hypothesis testing methods included one way analysis of variance (ANOVA). P values of less than 0.05 were considered to indicate statistical significance.

Histopathology examination: Histopathological examination of liver sections of the normal and ferulic acid treated groups (I and II) showed regular cellular architecture with distinct hepatic cells, sinusoidal spaces, and a central vein. The hepatocytes are polygonal cells with a well-preserved cytoplasm and a nucleus with prominent nuclei (Fig. 1a, b). On the other hand, in the hepatotoxic-positive EE-treated control group, histological examination showed extensive hydropic degeneration and liver ballooning (Fig. 1c). Histopathological examination also showed good recovery of EE-induced necrosis by ferulic acid as compared with the EE-treated group. Ferulic acid pre- and post-treatment at 40 mg/kg b.w. showed regular plates of liver cells and mild hydropic degeneration of liver   compared to those of the EE group (Fig. 1d, e). They showed nearly ordinary patterns with an increase normal hepatocyte parenchyma and a reduced development of fibrous septa and lymphocyte infiltration. Results of the gross and histopathological examination are shown in Fig. 1. 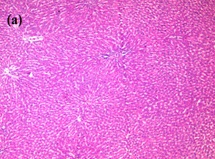 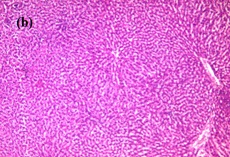 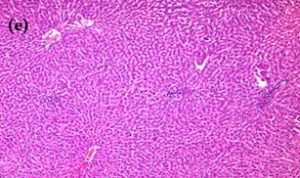 DISCUSSION: Estrogens are well-known to cause reversible intrahepatic cholestasis in susceptible women during pregnancy, administration of oral contraceptives, and postmenopausal replacement therapy 46. In the present study, rats exposed to EE (100 ug/kg b.w.) had significant reductions in plasma cholesterol and total bile acid (TBA)  as well as elevations of biochemical markers ALT, AST, ALP, LDH, GGT, total bilirubin and direct bilirubin (Tables 1 and 2). Liver cholestasis is associated with cellular necrosis and increases in tissue lipid peroxidation resulting in oxidative stress and ALT, ALP, p-GST, γ -GT, α-GST, and bilirubin were elevated 4. Cholestatic activity of EE appears to act through reduction of biliary excretory activity of the canalicular membrane 47 and decreased elimination of conjugated bilirubin and an increase in the conjugated level in plasma, a symptom diagnostic for obstructive jaundice 48. EE was reported to decrease serum cholesterol level, which is accompanied with an increase in hepatic cholesterol level 49. The hypocholesterolemic effect of EE appears to act through stimulating low-density lipoprotein receptor activity, increasing the binding of lipoproteins to the liver plasma membrane, 50 and increasing hepatic catabolism of low density lipoprotein 51.

Also, the decrease in bile flow due to cholesterol precipitation may be responsible for the reduced level of bile acids in serum after EE administration 52. When liver cell damage was evaluated from the changes in plasma ALT, AST, ALP, LDH, GGT, total bilirubin, direct bilirubin and total bile acid levels, ferulic acid administered at a dose of 40 mg/kg post- or pre-treatment was found to protect against EE-induced liver cell damage in rats. However, the protective effect of ferulic acid was higher at its pre- than at its post-treatment dose, indicating that the protective effect of ferulic acid against EE-induced liver cell damage is diminished at its post-treatment.

In addition, orally administered ferulic acid (40 mg/kg) was found to attenuate histological changes associated with necrosis and inflammation in liver cells observed in rats treated with EE alone. Also, the decrease in bile flow due to cholesterol precipitation may be responsible for the reduced level of bile acids in serum after EE administration 51. In the present study, oral administration of ferulic acid (40 mg/kg b.w.) showed significant protection against induced decrease in serum cholesterol and bile acids through inhibiting squalene monooxygenase, a rate-limiting enzyme in cholesterol biosynthesis. Also, ferulic acid stimulates cholesterol-7-α-hydroxylase activity, which is responsible for bile acids synthesis and reduces liver cholesterol levels 4, 53.

In the present study, the significant decrease in hepatic GSH, SOD, GPx, and CAT activity as well as well as elevations of MDA were detected after EE administration (Table 3).

The reductions of hepatic SOD and CAT activities in EE-induced cholestasis rats as compared with normal rats were reported in this study due to production of NO; as a result of inflammation and destructive processes 4, 60, the oxidative stress on the hepatic cells was increased leading to depletion of antioxidant enzymes that scavenge the toxic superoxide and hydrogen peroxide radicals that promote lipid peroxidation, whereas the ferulic acid-treated groups showed a significant increase in the hepatic SOD, GPx, CAT and GSH levels of the EE-induced cholestatic rats (Table 3). It was reported that the in-vitro and an in-vivo antioxidant property of ferulic acid probably arises from its ability to protect against the molecular effects of lipid peroxidation, free radicals, and ROS, and it also delays the progress of many chronic diseases 18, 21-23.

The present results show that ferulic acid could inhibit serum TNF- α, 5'- Nucleotidase and interleukin-1β (IL-1β) levels in the EE-treated group (Table 4). Free radicals are involved in the regulation of cell proliferation and death, as well as gene expression such as TNF- α, 5'- Nucleotidase, interleukin-1β (IL-1β) and MDA 54. Evidence indicates that free radicals, oxidative stress, and lipid peroxidation are present in cholestatic damage 55, 56. EE causes changes in the equilibrium between antioxidant and pro-oxidant activity, favoring the latter, since it increased production of hepatic MDA and reduced free-radical–scavenging activities. It has been shown that in chronic cholestasis, the increased intrahepatic concentration of bile acids induces mitochondrial toxicity and free-radical generation 57. TNF-α, TGF-b1, and interleukin-6 are the most extensively studied mitogenic and fibrogenic factors 4. Ferulic acid is also able to inhibit pro-inflammatory cytokine expression 58. Taken together, these results indicate that the antifibrotic effect of ferulic acid is associated with the blockade of mitogenic and/or fibrogenic signaling. TNF-α was reported to induce NO formation 4, 59. The increased NO production is recognized as an important mediator of physiological and pathological processes 60, as a result of these inflammatory and destructive processes. In addition, ferulic acid is a potent reactive oxygen species (ROS) scavenger 61 and normalized the oxidative stress biomarkers (GSH, SOD, GPx, CAT and MDA), resulting in reduced oxidative stress, which contributes to suppression of hepatocyte inflammation by EE.

Finally, histopathological examination showed a marked degree of bile duct proliferation in EE-treated rats (Fig. 1c). Comparing the beneficial effect of ferulic acid with that of EE-induced cholestasis, ferulic acid showed anticholestatic activity as indicated by the measured biochemical parameters and the histopathological examination of liver. In the present study, the histological findings proved that ferulic acid affected the recovery of the liver structure in rats with EE-induced liver cirrhosis. Indeed, there was remarkable reduction in fibrosis extent and a decrease of stellate infiltration in rats treated with ferulic acid groups compared to the control EE group. Histological studies confirmed the hepatoprotective effect of ferulic acid. EE-treated rat liver sections showed fatty degeneration of hepatocytes and necrosis of cells. Ferulic acid treatment (40mg/kg) almost normalized these effects in the histoarchitecture of the liver. Furthermore, the severe fatty changes in the livers of rats caused by EE were treated in the EE-treated groups.

Therefore, from this study, the ferulic acid could be a hepatoprotective against EE-induced liver damage in rats. In addition, the most novel and relevant finding was that ferulic acid supplementation was accompanied by the alleviation of bile duct proliferation and ductular reaction in this model.

In conclusion, the present study showed that ferulic acid has powerful anticholestatic activity against liver cholestasis induced by EE, in addition to its antioxidant action and free radical-scavenging activities.