INTRODUCTION: Liver, the largest organ in the vertebrate body, is the major site of intense metabolic activities. Liver injury induced by chemicals and drugs is a well-recognized toxicological problem. The hepatotoxicity possibly results from toxic intermediates that bind covalently to the hepatocytes, causing a centrilobular hepatic necrosis. Liver diseases are a serious health problem. In the absence of reliable liver-protective drugs in allopathic medical practices, herbs play a role in the management of various liver disorders 1.

Carbon tetrachloride (CCl4) is a xenobiotic producing hepatotoxicity in human beings and animals 2. In fact, it has been shown that the trichloromethyl radical, formed in the metabolism of CCl4 via the liver microsomal cytochrome P450 system, reacts rapidly with molecular oxygen to produce trichloromethyl peroxy radical. These radicals react with unsaturated fatty acids of phospholipids present in cell membranes, initiating lipid peroxidation (LPO) in liver cells 3. This leads to the formation of lipid peroxides, and a depression of protein synthesis 4 and elevated levels of serum marker enzymes such as AST, ALT and ALP5. The antioxidant activity or the inhibition of the generation of free radicals is important in the protection against CCl4 induced hepatopathy 6.

CCl4-induced liver injury is therefore considered as a model for the screening of hepatoprotective drugs 7.A number of investigators have previously demonstrated that antioxidants would prevent CCl4 toxicity by inhibiting lipid peroxidation 8, 9.

Many natural products of herbal origin are in use for the treatment of liver aliments.  Phytochemicals derived from plants are excellent antioxidants. Antioxidants appear to act against diseases by raising the levels of endogenous defense, by up-regulating gene expressions of the antioxidant enzymes 10, 11.

Edible mushrooms are nutritionally endowed fungi. Mushrooms accumulate a variety of qualitatively good protein, crude fiber, minerals and vitamins but are poor sources of lipids and are rich in secondary metabolites 12.

The present study was undertaken to evaluate the hepatoprotective potential of the aqueous extract of Volvariella volvacea (Bulliard ex Fries)Singer. against CCl4-induced liver injury.

Preparation of the sample: Mushroom was obtained from Tamil Nadu Agricultural University, Coimbatore, Tamil Nadu, India. The fruiting bodies were shade dried and powdered. 10g of the powder was extracted with 100 ml of water at 100oC for 4 hours, centrifuged at 5000rpm for 15 minutes and filtered through Whatman No. 1 filter paper. The residue was extracted twice with 100ml portions of water, as described above. The extracts were combined and vacuum evaporated. The extract obtained after vacuum evaporation was freeze dried and stored at 40C until further use.

Drugs and chemicals:            Silymarin was obtained from Himedia, Bangalore, India. All other chemicals used in this study were obtained commercially and were of analytical grade.

Experimental Animals: Female Sprague Dawley rats, weighing, 160g-180g were purchased from, Small Animal Breeding Centre, College of Veterinary and Animal Science, Mannuthy, Kerala, India. The animals were maintained under standard conditions of humidity, temperature (25 ± 2ºC) and light (12 h light/dark). They were acclimatized to animal house conditions and were fed on a commercial pelleted rat chow (AVM Cattle Feeds, Coimbatore, Tamil Nadu) and water ad libitum. Experimental animals were handled according to the University and Institutional Legislation, regulated by the Committee for the purpose of Control and Supervision of Experiments on Animals (CPCSEA), Ministry of Social Justice and Empowerment, Government of India.

Experimental Design: The animals were divided into 5 groups of six animals each. Hepatotoxicity was induced by intraperitoneal injection of CCl4   in paraffin oil 21.

Biochemical Analysis: At the end of the last injection, the animals were subjected to fasting for a period of 12 hours. At the end of 12 hours fasting the animals were sacrificed, blood was collected and the liver, were excised and washed in saline. 10% homogenate of the liver tissues was prepared with 0.1 M Tri-HCl buffer, pH 7.4. Serum was prepared from whole blood. The homogenates were centrifuged at 3000 rpm for 15 min at 4oC for cytosolic separation.

Histopathological Examination: The hepatic tissue of each animal were dissected out then fixed in buffered formalin for 12 hours and processed for histopathological examination. Four μm thick paraffin sections were stained with hematoxylin and eosin for light microscope examination using conventional protocol.

TABLE 1  EFFECTS OF AQUEOUS EXTRACT OF VOLVARIELLA VOLVACEA ON   SERUM BILIRUBIN, PROTEIN AND THE ACTIVITIES OF MARKER ENZYMES

The effect of VVAE on the activity of   the antioxidant enzymes (SOD and CAT), hepatic GSH content and lipid peroxidation levels are presented in Table 2. A significant reduction in the activity of SOD, CAT and GSH were observed in the group II animals that served as   CCl4   control animals. Lipid peroxidation levels as MDA content was observed to be markedly (p<0.05) elevated in the group II animals. Treatment with VVAE at 500mg/kg b wt and 1000 mg/kg b wt to the animals of group III and IV respectively resulted in a marked improvement in the activity of SOD and CAT and a  significant (p<0.05) raise in the levels of  GSH and decline in MDA content. Group V animals that were supplemented with the standard, silymarin effectively   normalized (p<0.05) the activity of the enzymes- SOD and CAT, increased the hepatic GSH content and depressed the MDA levels.

TABLE 2: EFFECTS OF AQUEOUS EXTRACT OF VOLVARIELLA VOLVACEA ON THE ACTIVITY OF SOD, CAT AND THE LEVELS OF MDA AND GSH IN LIVER 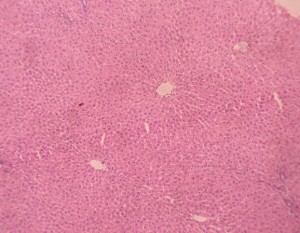 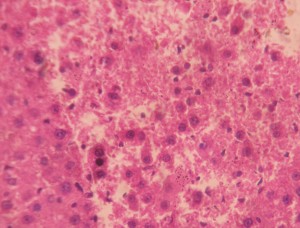 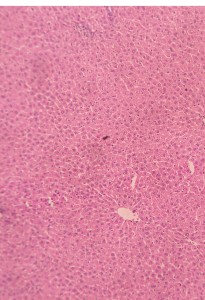 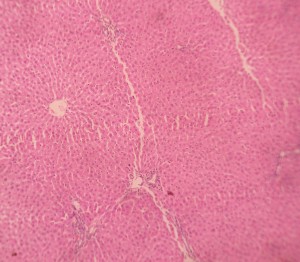 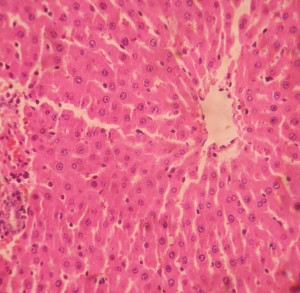 DISCUSSION: Serum bilirubin levels are indicators of hepatic damage. It is well known that necrotizing agents like CCl4 produce sufficient injury to hepatic parenchyma to cause large increases in bilirubin content.

In the liver it has been shown that toxicity of CCl4 is mediated by the Cyt P450-dependent mixed oxidase-mediated biotransformation product, trichloromethyl free radical (CCl3) and subsequent derivative Cl3COO 31. These free radical combines with the cellular lipid and proteins to produce lipid peroxidation, measured through its catabolite, malondyaldehyde (MDA), resulting in structural changes of endoplasmic reticulum and other biomembranes and loss of metabolic activity leading to liver damage 32.

A high concentration of bilirubin in serum is an indication for increased erythrocyte degeneration rate 33. Due to the liver injury caused by the hepatotoxin, there is a defective excretion of bile by the liver which is reflected in their increased levels in serum 34. The raised levels of bilirubin in the serum of the group II animals that served as CCl4 control group, suggest the hepatocellular injury caused by CCl4. Prior treatment with VVAE was observed to prevent severity of liver damage caused by CCl4 as evidenced by the low level of bilirubin in the serum in a dose dependent manner.

The results obtained were found to be in coordination with Shanmugasundaram and Venkataraman 35. Hippophae rhanmoides L was found to decrease the raised bilirubin levels after induction with CCl4 36   and Aerva lanata was exploited for its hepatoprotective activity also reduces the serum bilirubin levels upon CCl4 induction 37.

Liver injury induced by is the best-characterized system of the xenobiotic-induced hepatotoxicity and is a commonly used model for the screening the hepatoprotective activity of drugs 31, 38, 39. Serum AST, ALT, ALP and bilirubin are the most sensitive markers employed in the diagnosis of hepatic damage, because these are cytoplasmic in location and are released into the circulation after cellular damage 40.

In liver injury, the transport function of the hepatocytes is disturbed, resulting in the leakage of plasma membrane, thereby causing an increased enzyme level in serum, and soluble enzymes like AST will also be similarly released. The elevated activities of AST and ALT in serum are indicative of cellular leakage and loss of functional integrity of cell membranes in liver 3, 41.

Thus, the increase in the serum levels of AST, ALT, ALP and LDH suggest the liver injury due to toxic insult of CCl4. The treatment with VVAE was found reduce the serum activities of the enzymes in a dose dependent manner. The results suggest the capacity of the extract in counteracting against the damage caused by CCl4.

Our findings also correlate with the study of Ajith and Janarthanan 43 in Phellinus rimosus (Berk) and with the investigations of Zhou et al., 44 BJ-JN, a Chinese formulation on CCl4 induction.  The results are in agreement with those obtained by Jadon et al., 45 who showed that gallic acid, at 50 mg/kg body weight, could decrease plasma AST and ALT activities elevated by acute hepatic damage.

This evidenced that the administration of VVAE and silymarin showed hepatoprotective effect under CCl4-induced oxidative stress.

Living tissues are endowed with innate antioxidant defence mechanisms, such as the presence of the enzymes catalase (CAT), superoxide dismutase (SOD) and glutathione peroxidase (Gpx). A reduction in the activities of these enzymes is associated with the accumulation of highly reactive free radicals, leading to deleterious effects such as loss of integrity and function of cell membranes 47, 48.

Administration of CCl4 leads to generation of peroxy radical, O2_; which is associated with inactivation of CAT and SOD enzymes. This probably explains the significantly reduced activities of CAT, SOD and Gpx observed in rats challenged with CCl4 (group II). In rats receiving CCl4 and VVAE (group III and IV ) the activities of CAT and  SOD were significantly higher than in Group II rats, and very similar to the values noted in normal (group I rats). This suggests a hepatoprotective effect by VVAE extract, which is a very encouraging finding. The extract possibly confers this protective effect by dampening the generation of free radicals that is induced by CCl4.

GSH is the major non-enzymatic antioxidant and regulator of intracellular redox homeostasis, ubiquitously present in all cell types 50. Studies with a number of models show that the hepatotoxicity of xenobiotics often is produced by GSH depletion 51, 52. Significant increase in the hepatic GSH content suggests the protective role of VVAE.

Treatment of Z. mauritiana extract was found to modulate and increase the levels of vitamin E and glutathione in the CCl4 induced rats 53.

Grape seed extract was found to normalize the enzyme activities 54. Yang et al., 55 reported that Ganoderma lucidum when administered at a dose of 500mg exhibited hepatoprotective activity in rats with CCl4 induced toxicity which is in agreement with our study. A significant restoration of antioxidant enzyme activities by treatment with Phellinus rimosus (Berk) Pilat 43, A. camphorate 16and P. Ostreatus 14 in CCl4 intoxicated animals also supports our study.  Hsu et al. 57 reported that D.salina increased the activity of the antioxidant enzymes in CCl4- induced hepatic damge in rats.

Lipid peroxidation has been implicated in the pathogenesis of increased membrane rigidity, osmotic fragility, reduced erythrocyte survival and perturbations in lipid fluidity. It has been hypothesized that one of the principal causes of CCl4- induced hepatotoxicity is lipid peroxidation of hepatocyte membranes by free radical derivatives of CCl4 3, 58.

The observation of elevated levels of hepatic MDA in Group II rats (administered CCl4 alone) in the present study is consistent with this hypothesis. Thus, the maintenance of near normal levels of hepatic MDA in Group III and IV rats (administered with mushroom extracts) is of great interest since it provides additional evidence to suggest a hepatoprotective role for Volvariella volvacea extract.

Histoarchitectural improvement on treatment with VVAE suggests the protective effects of the extract in a dose dependent way against CCl4 induced hepatic injury. Reduction in serum bilirubin and marker enzymes (AST, ALT, ALP, and LDH), and augmentation of endogenous antioxidants and suppression of MDA content supports the hepatoprotective and antioxidant activity.

This protective efficiency of VVAE may be due to its potent antioxidant activity/or by scavenging free radicals.

CONCLUSION: The results observed thus suggest the mushroom extract at both doses (500mg/kg b wt and 1000mg/kg b.wt) effectively ameliorated the toxic effect of CCl4 in a dose dependent manner.

ACKNOWLEDGEMENT: The authors are thankful to the Management of Kongunadu Arts and Science College, Coimbatore, Tamilnadu, India.