ABSTRACT: The present study was aimed to evaluate the anti-oxidative defence system of Hydnocarpus laurifolia in diabetic rats and its potential effect against the β-cell damage induced by oxidative stress. Hydnocarpus laurifolia is a plant which belongs to the family Flacourtiaceae. According to the Indian system of traditional medicine it is used in the treatment of diabetes mellitus. Also literature reveals that the plant possesses anti-inflammatory, anti-leprotic and anti-oxidant property. Type II diabetes was induced in Wistar rats (180-250 gms) by intra peritoneal injection of Streptozotocin (STZ) at 30 mg/kg body weight. Diabetic rats were orally administered with ethylacetate extract of H.laurifolia (EEHL) at two different doses of 100 and 300 mg/kg body weight. Serum glucose and insulin levels were determined. The in vivo anti-oxidant study was determined by evaluating enzymatic anti-oxidants such as Superoxide dismutase (SOD), Lipid peroxidase (LPO) and Catalase (CAT) in hepatic tissue of STZ induced diabetic rats.The MDA levels were depleted and SOD and CAT enzymes were restored in diabetic rats treated with EEHL at the dose of 300 mg/kg body weight. These findings revealed that H.laurifolia seeds possess potent anti-oxidant and anti-lipid peroxidative activity, thus mitigates STZ-induced oxidative stress and exhibits anti-diabetic properties.

INTRODUCTION: Diabetes mellitus is a metabolic disorder characterized by hyperglycaemia with hampered metabolism of vital biological components like carbohydrate, protein and lipids. The effects are mainly due to the defective insulin secretion, loss of insulin receptors or both. 1 Earlier century in India, two physicians “Charaka and Susruta” reported the disease. However, in 18th-19th century hyperglycaemia is less visualized clinically, identified by uncontrolled glycosuria and usually diagnosed in later stage of life, currently it is recognized as type 2 diabetes mellitus.

Whenever these free radicals are produced, their effects are monitored by defence system of the body which includes antioxidant enzymes like superoxide dismutase (SOD), catalase (CAT), glutathione peroxidase (GPX), glutathione reductase (GR) and lipid peroxidase (LPO). 2 This “oxidative shielding” acts as a protective mechanism to counter the attack of toxic pathogens or noxious chemicals or to destruct the cell by apoptosis and thus preventing its advancement to neighbouring cells. 3 The term “oxidative stress” is biological state in which ROS and RNS level attain a maximum peak, either by excess production or insufficient removal. Since ROS and RNS have been a highly reactive molecule it will cause some alteration to vital biological proteins, carbohydrates, DNA, lipids and other molecules, further prelude to physiological dysfunction of cells and pathologic condition like diabetes, heart diseases and cancer. 4

From the researcher’s point of view, investigation on medicinal plants has gained importance. New therapies are needed which control the hyperglycaemic condition and prevent long-term complications. Though there are drugs which were reported to control blood glucose levels of diabetic subjects/ animal models, these failed to control complications of diabetes because of side/toxic effects such as hepatotoxicity or cardiac failure etc. Therefore, authentic evaluation is needed for herbal drug with an expectation of product efficacy, safety and therapeutic risk/benefit. Hence, the current research aims to scientifically investigate the traditionally used medicinal plants in the treatment of diabetes mellitus, their insulin secretagogue action and potent anti-oxidant effect.

Hydnocarpus laurifolia Dennst. Ex Sleumer is a wild plant of the genus Hydnocarpus. In folklore medicine, the fruits are used for the treatment of diabetes mellitus. 5 Previous preclinical reports prove the anti-hyperlipidemic property, anti-inflammatory, anti-neoplastic activity and anti-oxidant effect. 6, 7 The literature survey reveals that there is no evidence with respect to the anti-diabetic activity of H.laurifolia seeds (with hulls). Based on above information the present study necessitate to assess the protective effect of the plant in streptozotocin (STZ) induced oxidative stress.

Animals: Male Wistar rats weighing about 180-250 gms obtained from National Institute of Nutrition, Hyderabad. They were kept in quarantine for acclimatization in the animal house of Sri Venkateshwara College of Pharmacy in animal cages at the ambient temperature of 220 C + 20 C and relative humidity with 12 hr each of dark and light cycles and were fed pelleted diet and water ad libitum. The experimental protocol was duly approved by IAEC (Institutional Animal Ethical Committee) of CPCSEA (Committee for purpose of control and supervision of Experimentation on animals) through its reference no: IAEC/SVCP/ 2011/006, Dated: 26/7/11.

Acute toxicity studies: The acute toxicity study for EEHL was done according to the OECD guidelines No. 423. 8 The extract did not show any noticeable signs of toxicity when given in doses up to 2000 mg/kg by an oral route. Hence, for further studies two doses 100 & 300 mg/kg body weight were selected.

Streptozotocin induced diabetes: A freshly prepared solution of STZ (30 mg/kg in 0.1 M citrate buffer, pH 4.5) was injected intra peritonially to overnight-fasted rats. The rats showed hyperglycaemia within 48 h of STZ administration. 9 The rats having fasting blood glucose (FBG) of 250 mg/dl or above were selected for the study.

The experiment was carried out in five groups of six rats each:

At the end of the experimental period, the blood was withdrawn from retro orbital plexus and centrifuged. Serum glucose was estimated on 15th day at 0 hr, 1 hr, 2hrs, 4hrs, 6 hrs and 8 hrs by Glucose oxidase method and absorbance was measured at 505 nm by UV-Spectrophotometer (ELICO-Sl-159). The fasting serum insulin was estimated by Maglumi auto analyzer (MAGLUMI 1000, Fully auto chemiluminescence Immunoassay (CLIA) analyzer at Qedcure labs, Kukatpally, Hyderabad. 10 On the 16th day animals were sacrificed and the liver was removed and homogenized for in vivo antioxidant activity study.

Preparation of liver homogenate: The liver was quickly removed and perfused immediately with ice-cold saline (0.9% NaCl). A portion of the liver was homogenized in chilled Tris-HCl buffer (0.025 M, pH 7.4) using a homogenizer. The homogenate obtained was centrifuged at 5000 rpm for 10 mins, supernatant was collected and used for various in vivo antioxidant assays.

In vivo Antioxidant Activities: Lipid Peroxidation is based on the reaction of Malondialdehyde (MDA) one of the products of lipid peroxidation with thiobarbituric acid to form Thiobarbituric acid reactive substances (TBARS), which has a pink color with absorption maxima at 540 nm. 11 Catalase (CAT) activity was determined according to the method of Aebi. 12 Superoxide dismutase (SOD) activity was determined colorimetrically by the method of Kono. 13

Statistical Analysis: Results were expressed as the mean ± S.E.M. for Statistical analysis of the data group, means was compared by one-way analysis of variance (ANOVA) followed by Dunnette’s test. p<0.001 was considered to be statistically significant.

Effect on blood sugar levels: The present investigation reveals that STZ challenged rats displayed a significant elevation (*p<0.001) in the mean serum glucose level at 0 hr, 1 hr, 2 hrs, 4 hrs and 8 hrs as compared to the control rats. With the oral administration of EEHL (100 mg/kg and 300 mg/kg) reduced the blood glucose levels significantly (*p<0.001) from 0 hr to 8 hrs as comparable to the diabetic control rats. Fasting insulin levels in EEHL treated diabetic rats restored the levels significantly (*p<0.001) to normalcy as compared to diabetic control rats Table 1. 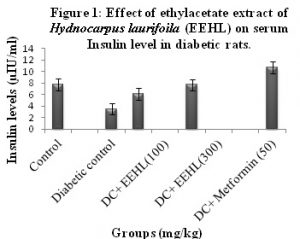 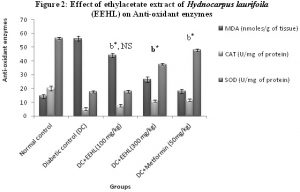 The data are expressed in Mean±S.E.M; n=6 in each group; bp<0.001, significant, compared to diabetic control

DISCUSSION: In the biological system, free radicals are naturally generated in a constant manner during various metabolic reactions, where they can cause an extensive damage to the tissues generating complicated diseases such as diabetes, atherosclerosis, neurodegenerative diseases, cancer and Rheumatoid arthritis. In diabetes mellitus, this oxidative damage to the tissues precedes to the appearance of various complications which may be fatal. Thus a drug with good glycaemic control and anti-oxidant property may combat the development of complications. Though there are many synthetic drugs to overcome this oxidative damage, because of their adverse effects it’s always better to use natural anti-oxidants from traditional medicine.

Streptozotocin (STZ) is a noxious chemical agent used to induce a state of hyperglycemia in preclinical models. It induces diabetes due to rampant generation of reactive oxygen species (ROS) that causes rapid ATP dephosphorylation which may lead to substrate availability for xanthine oxidase. So, these series of toxic events lead to the generation of superoxide radicals, hydrogen peroxide, and hydroxyl radicals and

causes oxidative pancreatic β- cell damage.14 Further, STZ causes selective pancreatic β-cell islet cytotoxicity through their lease of nitric oxide(NO) and there is subsequent β-cell necrosis. In the present study, STZ significantly induced hyperglycemia and oral administration of EEHL for a period of 14 days caused a significant reduction in blood glucose levels. This could be due to the peripheral utilization of glucose (or) potentiation of secretion of insulin from existing β-cells of islets as evident by the results obtained.

On the other hand, depleted level of antioxidant enzymes may prelude to an elevated level of noxious superoxide anion (O2−) and hydrogen peroxide in the vital tissues. These radicals prelude to release hydroxyl radicals, resulting in initiation andpropagationoflipidperoxidation.16 The present study indicated a significant reduction in lipid peroxides which could be due to the presence of flavonoids, that accord to the anti-oxidant property of the plant. Decreased levels of SOD and CAT in diabetic rats may be due to the inactivation caused by reactive oxygen species. 17A marked depletion in SOD activity could be due to the accumulation of H2O2 or by glycation enzyme, whereas reduction in CAT activity could result due to chronic exposure to H2O2 in vivo. Treatment with the extract of H. laurifolia for 14 days augmented the levels of anti-oxidant enzymes SOD and CAT significantly which may be due to the presence of polyphenolic compounds. Such anti-oxidant properties of polyphenols could be ascribed to the property of scavenging of free radicals, but also by the modulation of the mitochondrial function which represents the major cellular source of ROS. 18

In this context, the anti-diabetic potential of EEHL might be due to the effect of bioactive principles like flavonoids, steroids, tannins, glycosides and triterpenoids which has also contributed to the effective radical scavenging property present in the plant.

CONCLUSION: In conclusion, results indicated that ethylacetate extract from the seeds of H.laurifolia possess potential anti-diabetic activity. At the dose of 300mg/kg p.o EEHL has significantly increased the anti-oxidant status, hence protecting the tissue from oxidative damage and also helps in combating the complications of diabetes. Thus, Hydnocarpus laurifolia is useful in the management of the disease. Further, studies are needed to understand the dynamic action responsible for the ant-diabetic activity.