ABSTRACT: Protein conformation and dynamics are influenced by various factors, including binding of ligands, their physico-chemical properties, etc. Every conformational change is dictated by an array of events, as making and breaking of bonds or change in interaction of protein residues. The three dimensional structure of protein molecules are widely investigated, based on small world network approaches, with an emphasis on different combinations of descriptors affecting the structure which have been tested on studies involving binding in protein ligand complexes and for protein-protein complexes. This application has revealed the benefits and success of the small world network approach which can change the focus from specific interactions in the local environment or to non-local phenomenon. Network analysis of interacting protein upon ligand binding is analysed. A similarity in interaction parameters among residues of the target protein, upon binding of particular ligands, is identified. This method differentiates ligands, on the basis of overall changes in interaction among residues of Target proteins in complex.

INTRODUCTION: Protein conformation and dynamics are imposed by physical, chemical and thermodynamic components that constantly undergo change during interaction. Small molecule binding is expected to bring about various transformations based on physio-chemical characteristics of interacting molecules, during and after binding. The dynamics in conformational change involved, affects association and dissociation of ligand and protein 1. Interactions during and after complexation, are governed by many intermediate conformations with different ambiguous binding sites.

Intrinsic protein flexibility is an important criterion to be considered for drug design methods. Interactions are the primary area in focus, for discovery of medicinal compounds and their development. Studies focus on different aspects of interaction, the various methods used from chromatography to systems biology.

Without modifying or labelling either molecule, they help to find stability in interaction of protein-small molecule, based on size-exclusion of complex and individual components. The rate constants of association and dissociation are measured by attaching either molecule to a surface, and monitoring the other partner's binding. Various methods are used from different perspectives, to identify the interactions of macromolecules as proteins and small molecules. The analyses have enabled understanding and solving of important chemical and biological processes.

These include, integrating synthetic chemistry and analytical chemistry to understand the biological system better, study activity of small molecules and using them for analysis as affinity reagents, screening agents to identify bioactive molecules etc.2 Probes as natural products or synthetic compounds are in use, to identify protein targets, which are therapeutically applicable in chemistry. Biochemical methods include identification of endogenous metabolites, to target chosen proteins. This also involves extensive use of techniques in synthetic and analytical chemistry, to recognise protein small molecule and metabolite interactions 2. Many chemical and biological specifications are taken into consideration, to develop effective strategies for identification of an appropriate ligand and target.

Computational methods form an important tool in understanding the process, by relating the target spectra to global models including pathway and network of macromolecular interactions. They help with integration of interaction, with existing functional annotations 6. Drug target interaction analysis is continuously evolving field of research, and focus on novel approaches to find an appropriate ligand and biological target. Network analysis has focussed mostly on protein-protein interactions. However, interaction analyses for identification of an effective drug for a given target are also carried out. System-wide approaches are used for understanding different scales of action of drug with protein (molecular scale) and their side effects (phenotypic scale), to predict the side effects of uncharacterised drugs or find the likely affected biological conditions. Study involving various drug combinations at the systems level, help to identify general and specific modes of action, and contribute to discovering novel multi-component therapies 6, 7. Drug interactions are compared based on the effects during target binding, at the structural level of macromolecule. Binding is found to effect the target conformation, and the changes are found to be discriminating in comparison, among target in various complexes chosen in the study.

Soluble Interleukine combines with its receptor sIL-6Ralpha, and this complex mediates the transition from acute to chronic inflammation. This is done, by changing the nature of leukocyte infiltrate 9. The development of tocilizumab, a humanised anti-human (interleukine) IL-6R monoclonal antibody, help to block IL6 mediated signal transduction, through its inhibition from binding to the transmembrane and soluble IL-6 receptors. This molecule has very good efficacy, for rheumatoid arthritis 10.

Many drugs which take part in reduction and elimination of the body’s inflammatory response, including irritation and injury and the affects as redness, warmth, swelling and pain, are used to treat inflammatory conditions. These drugs or non- steroidal anti-inflammatory drug (NSAID) molecules are used, in case of arthritis and tendinitis. They include aspirin, diclofenac, esomeprazole, ibuprofen, indomethacin, ketorolac, nabumetone, salsalate, celecoxib, etodolac, naproxen, piroxicam, which are used for their anti-inflammatory properties 11, 12.

Naproxen an NSAID reduces substances related to inflammation, pain and fever. Esomeprazole, is a proton pump inhibitor used in combination with naproxen. This compound is found to treat symptoms of osteoarthritis, rheumatoid arthritis and ankylosing spondylitis. It reduces the acid quantity, produced in stomach ulcers or through use of an NSAID, and treats the symptoms 13. However, esomeprazole is also found to control Inflammation, by suppressing the expression of pro-inflammatory molecules and vascular cell molecule-1, inducible nitric oxide synthase, tumor necrosis factor-alpha (TNF-α) and interleukins (IL-1β and IL-6) in cell culture studies. This function was identified, based on strong induction of the stress-inducible cytoprotective protein heme oxygenase-1 (HO1), and the anti-fibrotic effect is associated with potent inhibition of fibroblast proliferation, as well as downregulation of profibrotic proteins including receptors for transforming growth factor β (TGFβ), fibronectin and matrix metalloproteinases (MMPs) 14.

The compound effects of esomeprazole, is found to down regulate the expression of several key mediators of inflammation including VCAM-1, TNFα, IL-1β and NfκB. It exhibits, decreased adherence of inflammatory cells to vascular wall. The compound diminishes the devepment, of several pro-inflammatory cytokines, induced by bleomycin and ionizing radiaiton. Esomeprazole treatment also reduce lung injury from IL-1β in plasma of animals, which are subjected to bleomycin-induced lung injury and mitigated inflammatory and fibrotic responses, in a murine model of acute lung injury. This compound is compared with phytoquinolines from Toddalia aculeata, for understanding their inflammatory properties.

Structure of inflammatory target interleukine (IL) is taken as 3D coordinates from PDB 15. Complexes of structures are prepared, with phytoquinolines identified from Toddalia aculeata (TA) 16. The complexes are energy minimised. The interface formed with various ligands, are studied for their interactions with target. The presence of Glutamic acid interactions are identified with the target, at binding site and complexes were differentiated. Glutamic acid at position 173, participated in the interactions with compounds esomeprazole, and both phytoquinolines from Toddalia aculeate 17.

The local clustering coefficient quantifies vertexes, based on closeness of neighbours to being a clique or a complete graph. The average of local clustering coefficients of all vertices as measured by Watts and Strogatz, represents an overall level of network clustering. This parameter is expected to be affected by the variation, in interaction of small molecules representing the nodes. The interactions among nodes were determined, based on changes affected by interacting ligands. Distribution of coordinates on the basis of variation effected by ligand interactions, are calculated, and neighbourhood connectivity distribution.

Analyses of the network distribution parameters are done using the software platform Cytoscape. Molecular interaction network is created with intramolecular interaction variations, in target protein residues. Results indicate variations, exhibited by interacting components when it binds to different targets 18. Stability of interaction in ligands is determined through the dynamic analysis with temperature and pressure constant (NPT dynamics). Steepest descent minimisation of the complex was done for 100 steps and 1000 steps of ABNR (adopted basis Newton-Raphson method (ABNR). Dynamics was run without any implicit solvent. Shake algorithm was used for restraining backbone atom during dynamic run. Dynamics run is carried out for 1femto sec time step, a maximum of 10 pico seconds 19. Variation in residue interaction network, formed by intramolecular interactions in protein, and stability among interacting components over a period of time are analysed among complexes formed by various ligands, and compared with interaction of phytoquinolines from Toddalia aculeata.

RESULTS AND DISCUSSION: Interleukin (IL6) complexes prepared with small molecules from ligand a dataset are found to be stable. The most stable conformation for each ligand complex, is identified based on free energy and full fitness score. Low free energy is scrutinised, and structures with higher binding affinity are identified. Intermolecular interaction analysis show, both phytoquinolines from Toddalia aculeata bind to Glutamic acid residue at position 173, at the same binding site as esomeprazole. Complexes of IL6 is taken with both phytoquinolines from Toddalia bound at the same site, as that of esomeprazole. Dataset of ligands formed from stable complexes are taken, which are further energy minimised. Residue interaction network (RIN) of complexes, Fig. 1 are analysed for each protein, bound to various targets. The network interaction indicates variation in interactions among the residues. 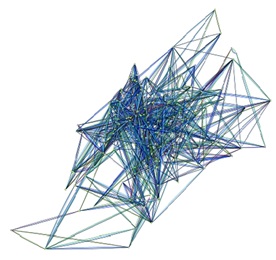 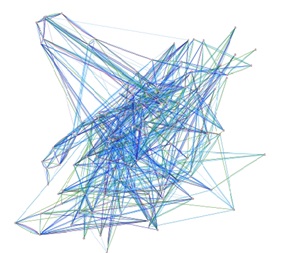 Residue interactions are taken as directed and undirected network interactions. Complex network for residues bound to various ligands, are analysed based on their properties. They show differences in clustering limits, for different complexes. Network cluster nodes studied, reveal varying number of neighbours in comparison to other complexes. The ligands bind to IL6 receptor at different binding sites. The distribution of residue interaction in network, is related to binding site of interaction, and protein residues involved in interaction. Complexes of IL6 bound with Toddalia compounds, show similar clustering distribution as esomeprazole (Fig. 2, Table 1). 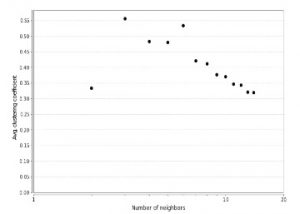 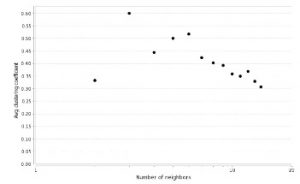 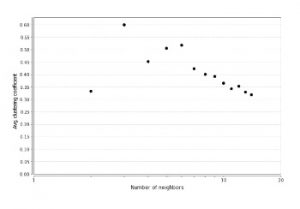 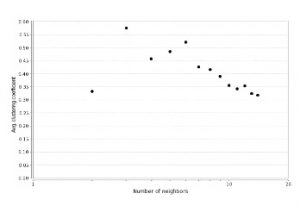 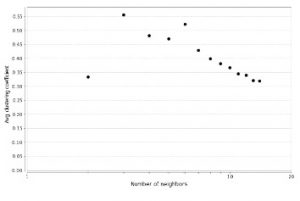 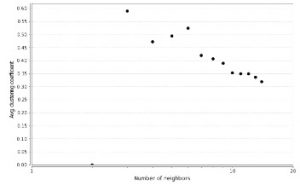 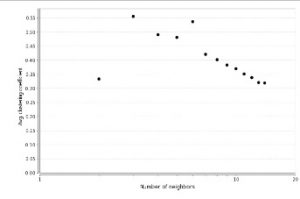 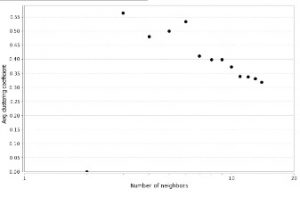 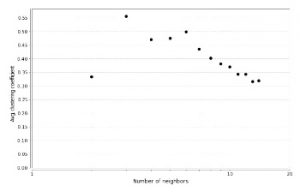 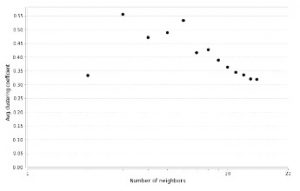 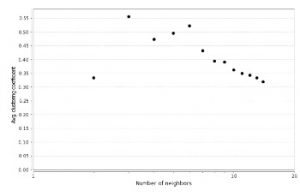 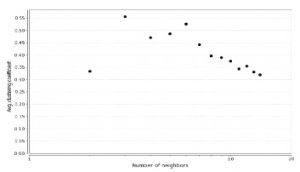 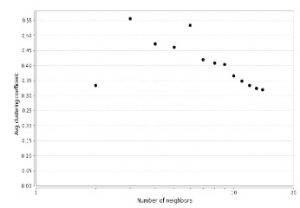 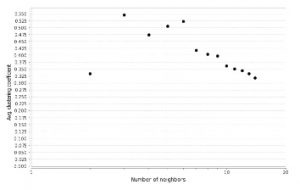 The Standard Deviation (SD) of average clustering coefficient values indicate, there is a higher deviation in clustering, based on number of nodes forming clusters. The values are high in both directed and undirected residue interaction network, for esomeprazole and TA compound 1. There is no significant variation in SD among the directed and undirected clusters respectively in case of indomethacin. Ibuprofen and ketorolac also exhibit high SD among the average clustering coefficient in undirected cluster. In case of ibuprofen, the SD values are found to be high, also in case of directed network.

Results show, interaction of phytoquinoline compounds from Toddalia aculeata provides a relatively high the number of intracellular interactions in the target, in comparison to other compounds.

TABLE 2: SD OF VARIATION OF AVERAGE CLUSTERING COEFFICIENT ACROSS DIFFERENT CLUSTERS WITH VARYING NUMBER OF NODES IN DIRECTED AND UNDIRECTED RIN NETWORKS OF IL-6 COMPLEXED WITH VARIOUS LIGANDS

The values of neighbourhood connectivity, are calculated for network formed by the complexes. Table 3, Fig. 3 The results on neighborhood connectivity indicate, compounds from Toddalia aculeata, interact with the interleukin protein target, providing target conformation where variations of interaction of neighbours of nodes is found to be similar to that present in complexes formed by other NSAIDs. 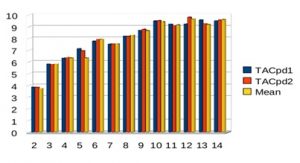 FIG. 3: NEIGHBORHOOD CONNECTIVITY OF PHYTOCOMPOUNDS (TACpd1 AND TACpd2) WITH MEAN ALL VALUES IN CLUSTER WITH VARYING NUMBER OF NODES

Complexes after minimisation are found very stable, thermodynamically. Interaction of target with ligands, over a period (1fs) is taken. Dynamic interaction of the complexes increased the total energy of complexes. The average energy based on the change in energy indicates the complexes show stable interaction over time. Two compounds etodolac and celecoxib are found to exhibit relatively lower variation in total energy. Both phytoquinolines obtained from Toddalia aculeata exhibit relatively lower variation in average total energy in comparison to other compounds Table 4.

CONCLUSION: Phytocompounds from Toddalia aculeata analysed for their interacting properties with protein Interleukine-6 displays, stable interaction at the interacting sites of one of the standard drug molecules as esomeprazole. The changes brought about by interaction among the protein residues in complex, indicate stability in complex formed and their dynamical interaction. The dynamic interaction is found to show lower energy variation among the stable energy minimised complexes, and complexes after simulation. Difference in the connectivity of nodes in clusters of complexes from the Toddalia aculeata compounds is insignificant when compared to the mean values of neighbourhood connectivity with other NSAIDs.