ABSTRACT: Nanoparticles have advantages, such as small size, high surface area, and modification using functional groups for high capacity or selectivity. Nanoparticles with Proteins are especially worthy of notice because they can be used for site specific targeting. Particulate systems like nanoparticles have been used as a physical approach to alter and improve the pharmacokinetic and pharmaco-dynamic properties of various types of drug molecules. They have been used in vivo to protect the drug entity in the systemic circulation, restrict access of the drug to the chosen sites and to deliver the drug at a controlled and sustained rate to the site of action. Nowadays active research is focused on the preparation ofnanoparticles using proteins like albumin, gelatin, gliadin and legumin.Protein nanoparticles hold promise as drug delivery systems for parentral as well as oral. This article reviews the introduction of nanoparticles with especial focus on protein nanoparticles with preparation, characterization and applications of Protein Nanoparticles.

INTRODUCTION:In recent years, there has been a dramatic increase in research, technology, and production of nanoparticles.These nanoscaled particles have physico-chemical properties different from those of bulk material and, thus, offer opportunities for the development of new applications. Some of these engineered nano-particles are already in use in a diverse array of applications including medicine, food, clothes, personal care products, information technology, and construction materials, resulting in a wide range of exposure scenarios

The most important advantage of colloidal drug carrier systems is the possibility of drug targeting by a modified body distribution as well as the improvement of the cellular uptake of a number of substances. As a result undesired toxic side effects of the free drug can be avoided, for example with methotrexate. Proteins are a class of natural molecules that have unique functionalities and potential applications in both biological as well as material fields.

Nanomaterials derived from proteins, especially protein nanoparticles are biodegradable, non-antigenic, metabolizable and can also be easily amenable for surface modification and covalent attachment of drugs and ligands. Because of the defined primary structure of proteins the protein-based nanoparticles may suggest various possibilities for surface alteration and covalent drug attachment 2.

Challenges to Nano Drug Delivery: Although nanotechnology in drug delivery has been successful, as evidenced by some nano drug products in the market, not all approaches have met with the same success. New nanomaterials being developed come with challenges which have to be surmounted.

However some of the challenges encountered have been and are still being tackled by modification of the physicochemical characteristics of the nanomaterials to improve on properties such as long circulation in the blood, increased functional surface area, protection of incorporated drug from degradation, crossing of biological barriers and site-specific targeting.

Another challenge of research and development (R&D) of nanomaterials for drug delivery is large scale production. There is always a need to scale up laboratory or pilot technologies for eventual commercialization. A number of nano drug delivery technologies may not be scalable due to the method and process of production and high cost of materials employed.

The challenges of scaling up include low concentration of nanomaterials, agglomeration and the chemistry process – it is easier to modify nanomaterials at laboratory scale for improved performance than at large scale. Maintaining the size and composition of nanomaterials at large scale is also a challenge. Despite the number of patents for nano drug delivery technologies, commercialization is still at its early stage. This is partially due to the fact that most of the research studies in nano drug delivery are carried out by researchers in academia.

Therefore, for these technologies to get to the market there has to be increased partnership with the pharmaceutical companies.

Unfortunately, a number of the major pharmaceutical industries are yet to consider nanotechnology as one of their priorities due to lack of regulatory guidelines and challenges of scaling up. However, it is envisaged that with the expiration of more patents and market loss, more pharmaceutical industries will take up the production of nano drug products in order to compete favourably.

Advances in nano drug delivery technology also provide new challenges for regulatory control. There is an increasing need to have regulations that would account for physicochemical and pharmacokinetic properties of nano drug products, which are different from conventional drug products. The United States’ Food and Drug Administration (FDA) and the European Medicines Evaluation Agency (EMEA) have taken the initiative to identify some possible scientific and regulatory challenges.

Furthermore, the International Organization for Standardization has set up a technical committee (TC 229) for the field of nanotechnologies to develop standards pertaining to terminology and nomenclature; measurement and characterization; and health, safety and environment amongst other standards. These standards are still under development 3.

The major goals in designing nanoparticles as a delivery system are to control particle size, surface properties 4 and release of pharmacologically active agents in order to achieve the site-specific action of the drug at the therapeutically optimal rate and dose regimen 5.

Though liposomes have been used as potential carriers with unique advantages including protecting drugs from degradation, targeting to site of action and reduction toxicity or side effects, their applications are limited due to inherent problems such as low encapsulation efficiency, rapid leakage of water-soluble drug in the presence of blood components and poor storage stability. On the other hand, polymeric nanoparticles offer some specific advantages over liposomes.

For instance, they help to increase the stability of drugs/proteins and possess useful controlled release properties 6, 7.

The advantages of using nanoparticles as a drug delivery system include the following:

(a)    Size of nanoparticles required.

(b)   Inherent properties of the drug, e.g., aqueous solubility and stability.

(c)    Surface characteristics such as charge and permeability.

Nano-particles have been prepared most by following methods; 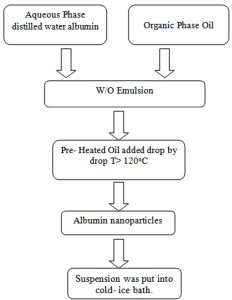 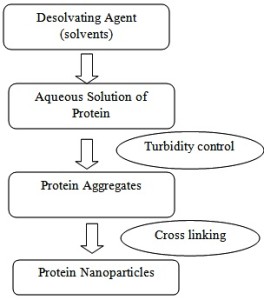 The particle forming properties of the alkyl -2-cyno acrylates can be exploited.

Today`s TEM is a versatile tool that provides not only atomic resolution lattice images but also chemical information at spatial resolution of 1nm or better, allowing direct identification the chemistry of a single Nano-crystal.

Depending on the affinity of the drug to the polymer, the drug will be surface adsorbed, dispersed in the particle polymer matrixin the form of a solid solution 15 or solid dispersion, or in some case, the drug may be covalently bound to the polymer.

Therefore, it is apparent that a large amount of drug can be entrapped by the incorporation method when compared to the adsorption 16. The macromolecule or protein shows greatest loading efficiency when it is loaded at or near its isoelectric point when it has minimum solubility and maximum adsorption. The drug loading of the nanoparticles is generally defined as the amount of drug bounded per mass of polymer (usually moles of drug per mg polymer or mg drug per mg polymer) it could also be given on a percentage basis based on the polymer.

(a)    Liberation due to polymer erosion or degradation,

(b)   Self-diffusion through pores,

(c)    Release from the surface of the polymer,

(d)   Pulsed delivery initiated by the application of an oscillating magnetic or sonic field 17.

In many case, some of these processes may coexist, so that the distinction between the mechanisms is not always trivial. When drug release occurs by a self-diffusional process, a minimum drug loading is necessary before drug release is observed. This is easy to understand since the process involves diffusion through aqueous channels created by the phase separation and dissolution of the drug itself. This mechanism rarely occurs with drug loaded nanoparticles since, as explained before, the encapsulation efficiency of most drugs is generally too low. In fact, release from the surface and erosion or bulk polymer degradation is usually the most important processes affecting the liberation of drug from nanoparticles.

Methods for quantifying drug release in vitro are:

Lastly, there is a better understanding of the role of regulatory proteins in the pathophysiology of human diseases. Consequently, pharmaceutical companies around the world have developed protein oral delivery technologies for producing therapeutically active ingredients in commercial scales, as listed in Table 118.

Proteins have become the drugs of choice for treatment of numerous diseases as a result of their exquisite selectivity and their ability to provide effective and potent action. Protein drug development, however, continues to be a formulation challenge to pharmaceutical scientists. Many protein drugs are currently used as parenteral formulations because of their poor oral bioavailability. This is due to several unfavorable physicochemical properties, such as large molecular size, susceptibility to enzymatic degradation, poor stability in the gastric low pH environment, poor penetration of the intestinal membrane, short plasma half-life, immunogenicity, and the tendency to undergo aggregation, adsorption, and denaturation.

Unfavorable physicochemical properties of proteins present monumental challenges to pharmaceutical formulation scientists. Designing and formulating a protein drug for delivery through the gastrointestinal (GI) tract requires innovative and practical strategies. Various strategies currently under investigation include chemical modification, formulation vehicles, protease inhibitors, absorption enhancers and muco-adhesive polymers. Among them, nanoparticles as a carrier or a device have become the focus of attention in this field recently. The nanoparticles possess certain advantages such as greater stability during storage, stability uy53zs after administration and ease of scale-up without an aseptic process for oral administration.

A dosage form containing mucoadhesive nanoparticles bearing a potential antibiotic should be useful for the complete eradication of H. Pylori 20.

CONCLUSION:  The above discussed literature postulates that the protein nanoparticles are the future of drug delivery systems adhering to the basics of delivering therapeutics with efficacy, optimum bioavailability, minimizing side effects, target oriented and time release fundamentals (tables 2 and 3). Therefore, in near future, drug delivery systems will be seen using more and more biodegradable polymers such as proteins eradicating the use of toxic and harmful polymers and helping mankind.

TABLE 2: EXAMPLES OF SOME THERAPEUTIC PROTEINS AND THEIR PHARMACEUTICAL APPLICATIONS

ACKNOWLEDGEMENT: The authors wish to extend their gratitude to the authorities of Bundelkhand University, Jhansi and Sam Higginbottom Institute of Agriculture, Technology and Sciences, Allahabad, for their continuous support during the preparation of this manuscript.