ABSTRACTAims The presence of carbonyl groups in proteins has been used as a marker of ROS-mediated protein oxidation. The present work was undertaken to study the importance of endogenous antioxidants like Vitamin C and vitamin E in different types of leprosy patients

Methods: Total 30 leprosy cases were studied. Patients were subjected to various    tests like, serum protein carbonyl as an index of protein oxidation, while serum Vitamin C and Vitamin E levels as endogenous antioxidants.

INTRODUCTION: Leprosy is a metabolic disease with a strong genetic component to which, during the patient’s life pathogenic factors of nutritive and metabolic origin are added, producing metabolic disorder consisting of the loss of control of the auto-oxidative reactions 1.

ROS can lead to oxidation of amino acid residue side chains, formation of protein-protein cross-linkages, and oxidation of the protein backbone resulting in protein fragmentation 2.

Humans are well endowed with antioxidant defence mechanism against reactive oxygen species; among the antioxidants are vitamins A, C and E, enzymes such as superoxide dismutase and catalase. One of the roles of Vitamins C, A and E is that of scavenging for free radicals in the aqueous and  lipid phase of cells and the circulatory system to mop up generated reactive oxygen species ROS 3, 4.

MATERIAL AND METHODS: The newly diagnosed cases of various types of leprosy and not yet started on MDT were selected from skin – V.D. Department, OPD and I.P.D. of Sassoon General Hospitals. The classification of the leprosy was done as per WHO formula. 15 cases each of Tuberculoid leprosy and of Lepromatous leprosy along with 30 age and sex matched healthy individuals who served as controls were selected. All these cases were studied for antioxidant status and protein oxidation.

Serum separated from the venous blood specimens, collected in the fasting condition was used for estimation of the serum protein carbonyl levels as well as that of vitamin C and vitamin E. All samples were stored in refrigerator and the estimations were done within 24-48 hours of specimen collection.

VIT-C, VIT-E AND PROTEIN CARBONYL LEVELS IN CONTROL AND DIFFERENT TYPES OF LEPROSY

** P<0.001; * P<0.05; $ P=1 i.e not significant. The data presented in this table consist of vitamin-C, vitamin-E and protein carbonyl levels in control and different types of leprosy 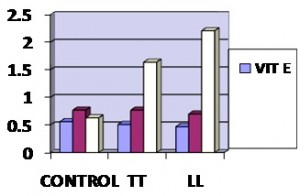 As the levels of protein carbonyl increased in the spectrum of leprosy from TT to LL, the levels of vitamin E decreased in the spectrum of leprosy. Coefficient of correlation i.e. R value is -0.9. Our results showed no correlation of vitamin C on protein oxidation, especially in cases of TT, but in LL R value is -0.7, also implicating an inverse nature of relationship.

Generation of Protein Carbonyl Derivatives: As already noted, oxidative cleavage of proteins by either the α-amidation pathway or by oxidation of glutamyl side chains leads to formation of a peptide in which the N-terminal amino acid is blocked by α-ketoacyl derivative.

However, direct oxidation of lysine, arginine, proline, and threonine residues may also yield carbonyl derivatives. In addition, carbonyl groups may be introduced into proteins by reactions with aldehydes (4-hydroxy-2-nonenal, malondialdehyde) produced during lipid peroxidation or with reactive carbonyl derivatives (ketoamines, ketoaldehydes, deoxyosones) generated as a consequence of the reaction of reducing sugars or their oxidation products with lysine residues of proteins (glycation and glycoxidation reactions).

The presence of carbonyl groups in proteins has therefore been used as a marker of ROS-mediated protein oxidation 2. Our study has showed significantly high values of protein carbonyl in both TT and LL as compared to controls. This result is in accordance with R Vijayaraghavan and C Panneerselvam (2005) who also found low values of vitamin E in patients of leprosy 8.

Vitamin E: Vitamin E can quench a variety of Oxyradicals including the superoxide anion radicals, singlet oxygen and hydroxyl radical. Vitamin E and Betacarotene are the primary lipid phase antioxidants. Vitamin E can protect the conjugated double bonds of beta-carotene from oxidation.

Vitamin E protects sulfhydryl groups in membrane proteins from peroxidation by quenching of 1O2 (singlet oxygen). This activity depends upon a free hydroxyl group (OH) in position 6 of the chromane ring 3. Vitamin E is an antioxidant and a potential immuno enhancing nutrient.

As it acts as a free radical scavenger it prevents them from reacting with proteins in cell and thus protects against protein oxidation. Also by virtue of its lipid protective action, it prevents formation of lipid peroxidation products which themselves, and independently, can initiate protein oxidation.

Osadolor HB and Ihongbe, JC 9 found that there were significant decreases in the plasma vitamin E (P<0.05) relative to the controls in patients with leprosy.

Suribabu CS and Sekar B 10 studied protective role of vitamin E in leprosy. He found that exogenous supplementation of vitamin E guards against the insult caused by ROS during the pathogenesis of the disease and antileprosy chemotherapy.

Rao and Saha 11 found that serum concentration of vitamin E showed a gradual progressive reduction over entire leprosy spectrum. The reduction in serum levels of vitamin E observed in leprosy subjects seemed to be disease related because as the disease advanced from the immunocompetent tuberculoid stage to the immunocompromised lepromatous stage, the serum concentrations of this vitamin declined progressively.

Vitamin C (Ascorbic Acid): Ascorbic acid or Vitamin C serves as the potent aqueous- phase antioxidant at low oxygen tension. Vitamin C functions as an “electron sink” as it donates its electrons to the free radical species, thereby converting it to less harmful forms. The donation of two hydrogens by vitamin C results in its conversion to dehydroascorbic acid via the ascorbyl radical intermediate. Replenishment of reduced ascorbic acid is facilitated by reduced Glutathione (GSH) another potent water soluble antioxidant. An overall depletion of antioxidants in hyperoxidant stress hampers the recycling of the oxidized form to the reduced form of ascorbic acid 4.

Osadolor HB and Ihongbe, JC 9 found that there were significant decreases in the plasma vitamin C (P<0.05) relative to the controls in patients with leprosy.

Sinha SN, Gupta SC, Bajaj AK 12 observed low levels of vitamin C in all types of leprosy. But as compared to our findings in which we found lower values in case of LL, the values were lowest in tuberculoid leprosy.

CONCLUSION: The present study established a good negative correlation between protein carbonyl levels and antioxidant Vitamins (especially vitamin E), elucidating the importance of dietary vitamins in preventing the oxidative damage in leprosy and their deficiency can be used as sensitive indicator of oxidative stress in leprosy patients. This fact also gave us an idea about supplementation of vitamins along with anti-leprosy drugs.