ABSTRACT: The aim of current investigation was to formulate and evaluate an oral time controlled drug delivery system to achieve timed release of Candesartan cilexetil for the treatment of cardiovascular complications. Blood pressure rises early in the morning which can leads to hypertension and congestive cardiac failure. Attempt has been made to develop a drug delivery which releases the drug based on changes in circadian rhythm. Time dependent pulsatile drug delivery consists of a core tablets containing Candesartan cilexetil with different excipients surrounded by coating materials. Coating materials consist of combinations of hydrophilic polymer as HPMC and hydrophobic polymer as ethyl cellulose in various combinations. Formulated tablets were evaluated for its micromeritics as well as post compression characteristics such as weight variation, hardness, friability, drug content uniformity and in vitro drug dissolution. The drug-excipients study was carried out by using FTIR. In vitro drug release studies were performed using pH 6.5 phosphate buffers for 8 hrs. Optimized formulation F10 was selected and tested for its accelerated stability which was found to be successful.

INTRODUCTION: Pulsed or pulsatile drug release is defined as the rapid and transient release of a certain amount of drug molecules within a short time - period immediately after a pre-determined off - release period 1. Pulsatile drug delivery systems are characterized by at least two distinctive drug release phases following a predetermined lag time. Drug release may be controlled by time, by site or by combination of the two parameters.

Delivery systems with a pulsatile release pattern are receiving increasing interest for the development of dosage forms, because conventional systems with a continuous release are not ideal. Most conventional oral controlled drug delivery systems release the drug with constant or variable release rates. A pulsatile release profile is characterized by a time period of no release rates (lag time) followed by a rapid and complete release 2.

Chrono-pharmacotherapy, the drug regime based on circadian rhythm, is recently gaining more attention worldwide. Pulsatile drug delivery system has great importance not just for the treatment of disease that are influenced by the circadian rhythm of the body, but also for the potential it holds to prevent the down regulation of drug receptor and to achieve efficient therapeutic effects.

Many systems in the human body such as cardiovascular, pulmonary, hepatic and renal systems show variations in their function throughout a typical day.

In cardiovascular diseases the focus is to optimally deliver the antihypertensive drug in higher amount in early morning and lower amount at night. Holter monitoring of the electrical properties of heart has revealed that 24 hours variation in the occurrence of ventricular premature beats with the peak in events in diurnally active person between 6 am and noon 3, 4.

Candesartan cilexetil is an angiotensin - receptor blocker (ARB) that may be used to treat hypertension. Candesartan lowers blood pressure by antagonizing the rennin-angiotensin-aldosterone system (RAAS); it competes with angiotensin II for binding to the type-I angiotensin II receptor subtype and prevents the blood pressure increasing effects of angiotensin II. Unlike angiotensin-converting enzyme inhibitors (ACE), ARBs do not have the adverse effect of dry cough. Candesartan may be used to treat hypertension, isolated systolic hypertension, left ventricular hypertrophy and diabetic nephropathy. It may also be used as an alternative agent for the treatment of heart failure, systolic dysfunction, myocardial infarction and coronary artery disease 5.

MATERIALS AND METHODS: Candesartan cilexetil was received from Mylan laboratories Hyderabad. Dibasic calcium phosphate (anhydrous DC grade) and Magnesium stearate were procured from Nitika pharmaceuticals Nagpur. HPMC grades such as K4M, LV 100 and ethyl cellulose grades EC 7cps and 10cps received from Colorcon Asia Goa. All other excipients and chemicals are of pharmaceutical and analytical grades.

Calibration of Candesartan Cilexetil: A stock solution of 100μg/ml was prepared by using phosphate buffer of pH 6.5. From this stock solution, suitable dilutions were prepared using the same solvent in the range of 2 to 12 μg/ml. The λmax of the drug was determined by scanning one of the dilutions between 400 and 200nm using a UV-visible spectrophotometer (Shimadzu - 1800) and found to be as 251nm. The absorbance of all other solutions measured in phosphate buffer pH 6.5.

FT - IR Studies: FT - IR spectroscopy was carried out to check the possible interactions between drug with excipients and polymers. IR spectrum of pure drug and polymers were observed between 4000 -400cm-1. (Shimadzu IRAffinity -1s FTIR)

Enhancement of Solubility: Candesartan cilexetil has poor solubility in water. Hence an attempt was carried out to enhance the solubility dissolution and bioavailability of the drug by using non volatile solvents.

Formulation of Core Tablets: The core tablets were prepared by direct compression method. Accurately weighed powder of Candesartan cilexetil was transferred and dissolves in Tween 80 as non volatile solvent followed by the addition of carrier agent as dibasic calcium phosphate. The inner core also contains varying concentrations of super - disintegrants as sodium starch glycollate, cross carmellose sodium and cross povidone for immediate release tablet. All the ingredients were dry blended for 20 minutes, followed by the addition of magnesium stearate and talc. These powder blends was compressed using Rimek mini press II machine (Karnavati Engineering Ahmadabad, India) to give immediate release core tablet as shown in Table 1.

Formulation of Pulsatile Tablets: The optimized core tablets were press coated with 200mg of mixed blend as given in Table 2. Half portion of mixed blend was placed in die cavity on which core tablet was kept and filled with remaining half content of blend followed by compression resulting in pulsatile tablets.

Flow Property of Powders: The flow properties of powder blends were carried out as bulk density, tapped density, Carr’s index, angle of repose and Hausner’s ratio.

Hardness and Friability: Hardness of all the tablets was determined by Monsanto hardness tester. The hardness of three tablets in each batch was measured and average was calculated in terms of kg/cm2. Friability represents mechanical strength of tablets. Roche friabilator was used to determine the friability. In this test, six tablets which was previously weighed subjected to rotation at 25 rpm for 100 revolutions. Tablets were dusted and reweighed; the loss in weight was calculated by following equation,

Content Uniformity: For the determination of drug content ten tablets were selected randomly, crushed and powdered quantity equivalent to one tablet was diluted with 100ml of phosphate buffer of pH 6.5. Then aliquots of the filter was diluted and analyzed spectrophotometrically at 251nm. The

drug concentration was calculated and reported in standard deviations.

Stability Studies: The objective of stability testing is to check the quality of drug product varies with time under the influence of environmental factors such as temperature, humidity and light. The accelerated stability study was carried out as per the ICH guidelines for 3 month for optimized formulation. The sample were packed in an aluminium foil placed in a tightly closed high density polyethylene bottle and kept at 40 ± 2°C and relative humidity at 75 ± 5%. Samples were taken at regular time interval of 1 month for a period of 3 months and analyzed. Any changes in evaluation parameters, if observed were noted. Test were carried out in triplicate and mean value was noted with standard deviation.

Release Kinetics: To determine the release mechanism and kinetics, the results of the in vitro dissolution study of formulated pulsatile tablets were fitted into various kinetics equations, such as zero - order, first order, Higuchi’s model, Korsemeyer - Peppas model and Hixson - Crowell model. Correlation coefficient values (R2) were calculated from the linear curves obtained by regression analysis of the above plots.

Calibration of Candesartan Cilexetil: Standard calibration curve of Candesartan cilexetil was carried out in phosphate buffer of pH 6.5. The curve shown linearity which was indicated in Fig. 1.

FT-IR Studies: FT-IR spectrum of pure drug shows characteristic absorption peaks and found that there were no interactions of drug with excipients and polymers. Hence it indicate no change in chemical integrity of the drug. FT-IR spectrums were shown in Fig. 2. 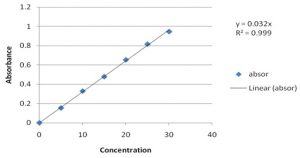 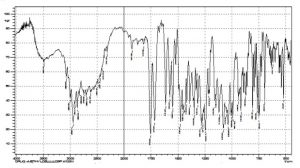 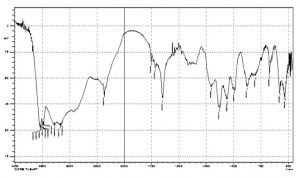 Solubility Enhancement: Candesartan cilexetil is a hydrophobic drug having very low water solubility. Attempt was carried out to enhance the solubility dissolution and bioavailability of the drug using various non volatile solvents such as glycerin, span 80, propylene glycol, Tween 80, Polyethylene glycol 400 etc. Among all the solvents, marked increased in solubility was found to be in Tween 80. Hence Tween 80 was selected as solubilizing agent for Candesartan cilexetil.

Pre Compression Parameters for Powder Blend: Blends of powder were subjected for pre compression evaluations parameters such as bulk density, tapped density, compressibility index, angle of repose and Hausner’s ratio. The values of all parameters were within prescribed limits as per USP XXVII and indicate good flow properties. The results were shown in Table 3. 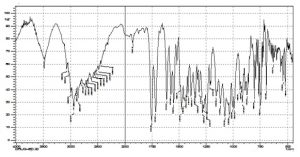 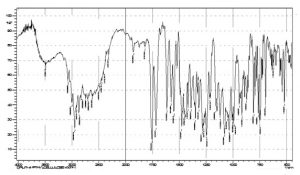 Post Compression Parameters of Tablets: In order to check the quality control standards, various tests such as weight variation, hardness and friability, disintegration, thickness, dissolution and content uniformity were performed. The weight variation of all core and coated tablets passed the test indicating average percentage weight variation was found within the pharmacopoeia limits.

In vitro Drug Dissolution Studies: In vitro drug dissolution studies were carried out both for core and coated tablets using USP type II apparatus (paddle method). Based on the drug release study, C3 was selected as optimized batch for press coating as it has very less disintegration time and maximum released data within a less time.  Batches F1 to F6 shown no lag time and complete drug was released in 4 hours, whereas F7 to F12 shown lag time of 3 hours except F10 shown 4 hours and complete drug release were found to be within 8 hours. The drug release patterns were observed with different combinations as shown in Fig. 6 - 8. 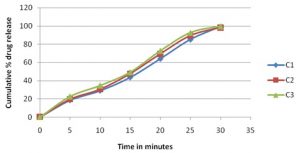 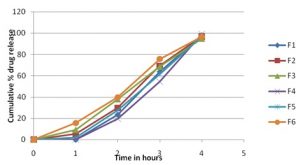 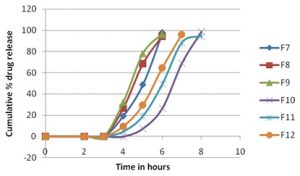 The data obtained from in-vitro release studies of all batches were fitted into various kinetics models such as zero order, first order, Higuchi model, Hixson model and Korsemeyer-Peppas model to find out the release mechanisms of drug release from pulsatile tablet. Regression coefficient values R2 were shown in Table 7. Results shown that formulation batch F10 follows zero order kinetics which was found to be more than all models value indicated that drug concentration was independent on time.

CONCLUSION: The basic objective of developing pulsatile tablet of Candesartan cilexetil was to prevent the cardiovascular complications such as early rise in blood pressure followed by heart failure. For achieving this goal, pulsatile drug delivery was formulated containing inner immediate release tablet and outer coating with combinations of hydrophilic HPMC and hydrophobic ethyl cellulose polymers. HPMC was selected because of its swelling and erodible behaviour and ethyl cellulose of its rupturable behaviour. Optimized batch was selected as F10 as having highest lag time of 4 - 5 hrs and released 98.67% of drug after 8 hr. It was observed that low hydrophilic and high hydrophobic polymer combination was responsible to achieve the desired lag time. Optimized batch F10 checked for its stability and found to be successful.