ABSTRACT: The extracellular alkaline phosphatase from halotolerant facultative alkaliphile Bacillus flexus FPB17 was purified through precipitation / dialysis / chromatography and resulted in 28 fold of purification. The molecular weight of this enzyme through SDS-PAGE gel is 63 ± 2 kDa. Optimum conditions for purified ALP activity were pH 9.0 and 35°C. The enzyme proved to be thermolabile and gets completely denatured at 60°C in 10 min. p-NPP was found to be a preferred substrate and Km (0.33 mM) and Vmax (0.2 mM mg-1) determined using p-NPP as a substrate. Inorganic phosphate proved to be a competitive inhibitor of ALP. Mg+2 and Ca+2 increased the ALP activity by 47% and 20% respectively whereas Sodium fluoride, Sodium arsenate and EDTA decreased the activity by 47%, 65% and 77% respectively. The superiority of dephosphorylation of λ phage DNA by this newly discovered alkaline phosphatase over that of calf intestinal alkaline phosphatase of M/s. HiMedia Laboratories, Mumbai opens up possibility of its future use in molecular biology as a replacement of alkaline phosphatases from Escherichia coli, calf intestine and shrimp

The psychrophilic ALPs are unstable at high temperatures 2 and, therefore are widely used in research requiring post treatment heat inactivation. Shrimp alkaline phosphatase (SAP) is the most widely used psychrophilic ALP because of irreversible inactivation at 65°C. Relative high extraction cost and problems in expression of recombinant enzyme have hampered the large scale production of SAP 3.

Several attempts have been made to identify novel ALP substitutes for SAP from other sources. Antarctic bacterium strain TAB5 alkaline phosphatase (TAP) was cloned and expressed in E. coli and improved yields of TAP by 21 times while using a two step chromatography method. The enzyme was compared with ECAP and found Mg+2 playing an important role in the dephosphorylation step 4.

The present work deals with the purification and characterization of extracellular ALP by a halotolerant facultative alkaliphile Bacillus flexus FPB17 isolated from alkaline lake sediments from North Gujarat, India.

Purification of ALP from FPB17:

The cell free supernatant of Bacillus flexus FPB17 identified on the basis of 16S rRNA sequencing (NCBI GenBank accession no. JN415115) obtained after centrifugation of the culture at 7000 g for 15 min at 4°C grown in the optimized medium for 48 h at 35°C at 140 rpm, was used as a crude enzyme preparation. The crude enzyme was precipitated by adding a solution of 60% w/v of Ammonium sulfate to the cell free supernatant. The precipitates stored overnight at 4°C were recovered by centrifugation at 7000 g for 15 min. The supernatant was again precipitated by addition of 15% w/v of Ammonium sulfate. All the precipitates pooled and re-suspended in 50 mM Tris-HCl buffer, pH 9.0 (reaction buffer). This suspension of protein precipitates was dialyzed by keeping the dialysis bag in reaction buffer at 4°C kept overnight. After this, the dialysis bag then dipped in sucrose solution for 1 h to remove salt, metal ions and water to get the proteins concentrate only.

Determination of Molecular weight (M.W.) of ALP from FPB17:

M.W. of ALP protein was determined by SDS-PAGE electrophoresis 7 on a vertical slab 12% w/v separating polyacrylamide gels at a constant voltage of 50-80 V for 5 h and staining with 0.2% silver nitrate. Standard protein molecular weight markers 10-225 kDa from Novagen were used.

Studies on pH & temperature optima and thermostability of ALP from FPB17:

The effect of pH on ALP activity was studied by incubating the purified enzyme with 1.35 mM  p-NPP substrate prepared in Citrate-Phosphate buffer (pH 6-7), Tris-HCl buffer (pH 7-9), Carbonate-Bicarbonate buffer (pH 9-11), Na2HPO4-NaOH buffer (pH 11-12) and KCl-NaOH  buffer (pH 12-13) kept at 35°C. The temperature optima and stability of ALP enzyme was determined in the range 0-60°C by incubating the enzyme in 1.35 mM p-NPP in reaction buffer for 10 min, followed by the estimation of ALP activity at 35°C. The experiments were conducted in triplicate and average values are presented.

Substrate spectrum and kinetics of ALP from FPB17:

1.35 mM solutions of different phosphate containing substrates including phenyl phosphate, β-glycerophosphate, 2-napthyl phosphate, Adenosine monophosphate, D-Glucose-6-phosphate, D-Fructose-1, 6-diphosphate, Nicotinamide adenine dinucleotide and Phenolphthelein diphosphate were prepared in 50 mM Tris-HCl buffer at pH 9.0 and checked for relative ALP activity in comparison with p-NPP. The effect of p-NPP on ALP activity was studied by incubating enzyme with different concentrations of p-NPP (0.054, 0.081, 0.108, 0.162, 0.270, 0.540 and 1.080 mM) in reaction buffer at 35°C for 10 min. The Km and Vmax were determined from Lineweaver-Burk plots.

Effect of inorganic phosphate, metal ions and EDTA on ALP from FPB17:

The effect of inorganic phosphate on ALP was determined by estimation of the ALP activity in presence of 0.00, 0.10, 0.25 and 0.50 mM KH2PO4. The inhibition constant (Ki) was determined from Lineweaver-Burk plot. The different metal ions viz. Mg+2, Zn+2, Ca+2, K+, Mn+2, Co+2, Sodium fluoride, Sodium arsenate and EDTA in 0.1 and 1 mM concentration were incorporated in reaction buffer and relative ALP activity was estimated compared to control (without any metal ions).

The 5’ ends of EcoRI / M1µ generated fragments of λ phage DNA were dephosphorylated by this newly discovered ALP as compared to the CIAP obtained from HiMedia Laboratories, Mumbai. The samples were then loaded onto 1% Agarose gel and electrophoresed at 100 V for 2 h and visualized under UV-Transilluminator for locating the dephosphorylated DNA of λ phage 8.

Following the protocols of purification of ALP used by Kim et al., 1997 9 and Ishida et al., 1998 10 for the extracellular ALP from Bacillus flexus FPB17, ammonium sulfate precipitation resulted in 1.57 fold purification, with a rise in specific activity as observed by Ishida et al., 1998 10 in Shewanella sp. This ALP remained stable and got further purified by dialysis at 4°C as in case of the phosphatase from Shewanella sp.10.

The purification with DEAE-cellulose anion exchange column increased the specific activity of this ALP 3.69 fold using the elution procedure followed by Kim et al., 1997 9. DEAE-cellulose chromatography of Bacillus flexus FPB17 resulted in a peak matching to the single and well defined peak reported in most of the ALPs along with 2 other proteins.

TABLE 1: IMPACT OF PURIFICATION STEPS ON THE RECOVERY OF ALP FROM B. FLEXUS FPB17 BROTH. 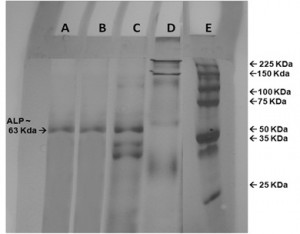 ALPs have been reported to be active under a wide alkaline pH range from 7.5-11.0 17. The optimum pH for Bacillus flexus FPB17 ALP was 9.0 similar to that of extracellular ALPs from Bacillus sp. P9 17. The enzyme activity was completely inhibited at pH below 6.0, and was inhibited about 47% at pH 11 (Fig. 2). It is known that under alkaline pH, the rate-limiting step for ALPs is the phosphate-dissociation while under acid pH the rate-limiting step was dephosphorylation of enzyme phosphate complex. Alkaline pH range ALPs possibly allow more E-R2OP complex formation1 resulting into the highest enzyme activity around pH 9.0.

The temperature optima for ALP activity was found to be 35°C (Fig. 3), as reported in ALP from Rhizobium sp.18 and very close to 37°C in case of ALP from Bacillus subtilis KIBGE-HAS 14. The thermostability of proteins depends upon hydrogen bonds, salt bridges, Vander-Waals and hydrophobic interactions between polypeptide backbones and side chains of amino acids. The ALP from this Bacillus flexus is thermolabile and gets completely denatured at 60°C in 10 min (Fig. 4) similar to the heatlabile ALP from Bacillus sp. P9 17 completely inactivated at 60°C in 50 min. However the activity of Bacillus intermedius S3-19 ALP is stable upto 60°C at pH 8-10 16. Heat lability is an important characteristic in the application of ALP for the dephosphorylation activity. ALPs from bacteria other than Bacillus e.g. Rhizobium sp. and marine bacterium Cobetia sp. have been reported to be stable up to 55°C 18 but get completely inactivated in 15 min at 55°C to 60°C in the presence of 2-Mercaptoethanol, Dithiothreitol 19 respectively. Heat stability of ALP from E. coli and other mesophilic organisms is very high 20. 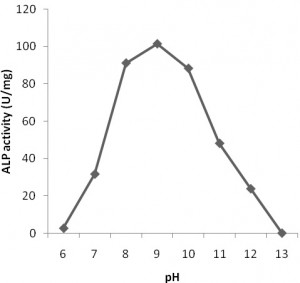 FIG. 2: EFFECT OF PH ON ACTIVITY OF ALP FROM BACILLUS FLEXUS FPB17 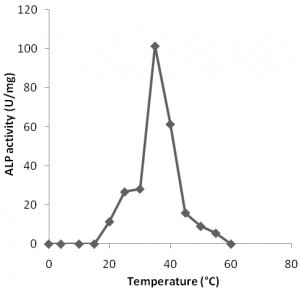 FIG. 3: EFFECT OF TEMPERATURE ON ACTIVITY OF ALP FROM BACILLUS FLEXUS FPB17 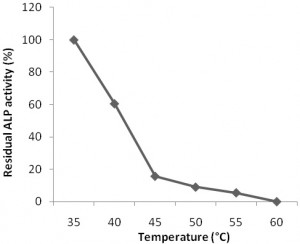 The ALP is a nonspecific phosphomonoesterase enzyme and thus can utilize a wide variety of phosphorylated substrates. Most of the ALPs prefer the synthetic substrate p-NPP in ALP from Cobetia marina 19 and ALP from Aspergillus caespitosus 21. ALPs from thermophiles like Thermus caldophilus GK24 9 prefer glycerophosphate. ALPs from psychrophiles like Vibrio cholera 15 showed preference towards glucose-1-phosphate. ALP of FPB17 was able to hydrolyze all the tested substrates but preferred p-NPP (Table 2).

TABLE 2: EFFECT OF DIFFERENT PHOSPHATE SUBSTRATES ON ALP ACTIVITY OF B. FLEXUS FPB 17.

Michaelis constants (Km) and Vmax for ALP from FPB17 were found to be 0.33 mM and 0.2 mM mg-1 respectively (Fig. 5). Bacillus flexus ALP presents Km values which are identical to the ALPs reported by von Tigerstrom, 1984 22 and Brenna et al., 1975 6. One of the characteristics of nonspecific ALPs is their high sensitivity to the final end product Pi. Increasing the concentration of Pi causes repression of ALPs in this Bacillus flexus ALP as reported in other bacterial ALP 23. Same Vmax and increased Km (from 0.33 to 1 mM) in case of ALP from Bacillus flexus FPB17 in presence of the Pi (Fig. 6) is an assignable characteristic of competitive inhibition of the enzyme 24.

This ALP enzyme showed a high Ki value of 1 mM for competitive inhibition by inorganic phosphate indicating a low binding affinity for phosphate groups in comparison to calf intestinal ALP (Ki of 0.22 mM), which got bound to the affinity column. Low phosphate affinity may be a general characteristic of heat labile ALPs 25. Thermolability of ALP from Bacillus flexus FPB17 is also associated with low binding affinity for phosphate groups. Competitive inhibition by phosphate was reported for the ALP from Bacillus licheniformis MC14 13, with the inhibition constant (Ki of 0.037M). 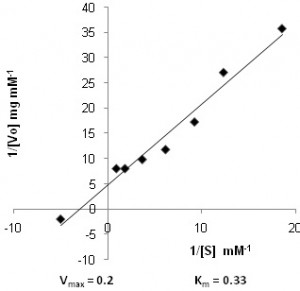 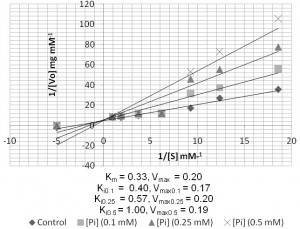 Effect of metals ions and enzyme inhibitors on ALP activity:

ALPs are metalloenzymes 26, often inhibited by metal ion chelators like EDTA 27. They are classically considered to be Zn+2 and Mg+2-dependent enzymes, especially E. coli and mammalian ALPs 28. The Bacillus flexus FPB17 ALP similarly got activated by increasing Mg+2 and Ca+2, while Zn+2 showed such effects only at its lower concentrations (Table 3). ALP from psychrophilic bacterium Bacillus sp. P9 also exhibits the requirement of same metal ions as activators 17. 47%, 65% and 77% decrease of the Bacillus flexus ALP activity was observed with Sodium fluoride, Sodium arsenate and EDTA respectively, similar to the reports for ALP enzyme from Rhizobium sp. by Kumar et al., 200818.

TABLE 3: EFFECT OF DIFFERENT METAL IONS AND EDTA ON ALP ACTIVITY FROM B. FLEXUS FPB17.

ALPs are commonly used in molecular biology for removal of 5’-terminal phosphate from DNA fragments to prevent self-ligation and to enhance the possibilities of exogenous gene insert. Dephosphorylation efficiency of P. abyssi ALP under plasmid dephosphorylation conditions using a linear cohesive or blunt-ended pBSK vector was estimated at 93.8 and 84.1%, respectively 5. ALP from Cobetia marina gave much more complete removal of phosphate from 5’ ends of EcoR1-generated DNA fragments of λ phage 19. As depicted by sharp bands in Lane F of the Electropherogram (Fig. 7) compared to the bands in Lanes G and multiple bands in Lane F compared to single bands in Lanes C and D, it is evident that this new ALP from Bacillus flexus dephosphorylated DNA of λ phage more efficiently than the standard CIAP of M/s. HiMedia Laboratories, Mumbai.

Of the several characterized ALPs, only ECAP, SAP and CIAP are routinely used in molecular biology at commercial scale 29. In comparison with newly discovered Bacillus flexus FPB17 ALP, ECAP and CIAP require much higher temperature for after use denaturation, and the SAP is cost prohibitive. The purified ALP from Bacillus flexus has shown satisfactory production yields, ambient (35°C and pH 9.0) kinetics, thermolability and desirable dephosphorylation activity, making it suitable for most molecular biology applications as a substitute for the widely used ECAP, CIAP and SAP enzymes. Further studies are necessary to elucidate its potential use and commercial feasibility of such applications. 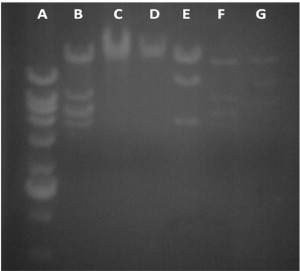 FIG. 7: ELECTROPHEROGRAM OF DEPHOSPHORYLATION OF Λ PHAGE DNA BY ALP OF B. FLEXUS FPB17.

ACKNOWLEDGEMENTS: The author is thankful to the Management of Kadi Sarva Vishwavidyalaya (KSV), Gandhinagar, where this research has been carried out and to her guide late Dr. M. C. Sharma.