Phosphatase serves several functions in plant metabolism including growth governance, phosphorous level control, starch breakdown etc. Alkaline phosphatases, acting at an alkaline pH 8, are a significant class of enzymes that catalyze release of phosphate esters especially. This enzyme study is so far limited only to animal source and partly to microbial sources, in terms of clinical research. Although it has been identified that plant as a source of this enzyme may be exploited, there always has been a challenge on the isolation and characterization of this enzyme and how pure it can be. This paper partly addresses the above problem, where the enzyme has been isolated from the seeds Dolichos lab-lab plant characterized and its purity was checked by HPLC. The purity obtained was 98% and the enzyme has been further analyzed for its activity on nucleic acids, which gave promising and positive results.

INTRODUCTION: Phosphorus is an essential element for the growth and development of organisms and the lack of this turns out to be one of the limiting factors of growth in plants, particularly in the development of its organs. Plants obtain phosphorus from the soil 1 as phosphatases are ubiquitous in plants, animals and microorganisms 2. Alkaline phosphatases 3; EC 3.1.3.1 are enzymes that catalyze the hydrolysis of a variety of phosphate esters and appear to exhibit pH optima above 8.

Alkaline phosphatase 4 has also been reported to be involved in the breakdown and mobilization of starch and sucrose, for the biosynthesis of essential oil in lemongrass. A possible role of human prostatic alkaline phosphatase was proposed in the dephosphorylation of esters to liberate fructose 5, which serves as an energy source for spermatozoa 6, or in the formation of choline from choline phosphate. Alkaline phosphatase also has a role in mineralization 7.

In vertebrates, the enzyme is an ectoenzyme, which is attached to the outer face of the plasma membrane through a phosphatidyl inositol-glycophospholipid (GPI) anchor covalently attached to the C-terminus of the enzyme that facilitates mineralization initiation in-vitro 8. Alkaline phosphatase isolated from plant seeds has better dephosphorylation activity 9 than produced prior from bacterial and animal sources. Also, studies on pure alkaline phosphatase have so far been focused mainly on their clinical significance 10 from animal sources.

This work is a successful effort in isolation of alkaline phosphatase from plant source with high purity, whose activity was demonstrated on nucleic acids.

Preparation of Enzyme Smoothie: All seeds as listed in Table 1 were procured from K R market located in Vijayawada, Andhra Pradesh and they were rinsed thoroughly with distilled water to remove surface contaminants and dust. The seed coats were peeled out and taken along with 2-3 ml of phosphate buffer saline. The seeds were made into a “smoothie” 11 with the help of a mortar and pestle and collected into a sterile tube.

Enzyme assay and Protein Determination: The activity of alkaline phosphatase at pH 8.4 was determined in a reaction mixture of final volume of 2ml containing 0.1ml of enzyme source, 2.5 µmole of 5-bromo-4-chloro- 3'- indolyphosphate/nitro- blue tetrazolium chloride (BCIP/NBT), 190 µmole of a buffer and 4 µmole of MgCl2 Tris-HCl buffer pH 8.4. The reaction mixture was incubated at 37oC. After incubation for 10 minutes, 3 ml of 10% trichloroacetic acid (TCA) was added and centrifuged at 3000rpm for 10 min. The amount of released inorganic phosphate in the filtrate was determined by King’s method 12 using Thermo UV Genesys spectrophotometer. Protein concentration was determined by the method of Bradford 13, using bovine serum albumin as the standard.

Ammonium Sulphate Fractionation: Alkaline phosphatase was purified from the crude extract obtained from all the seeds as listed in Table 1. The enzyme extract was precipitated by ammonium sulphate by adding varying concentrations of 50%, 60%, 70%, 80% and 90% at 4oC and the mixture was then centrifuged at 15000rpm for 10 min. The pellet obtained was then dissolved in one ml of 1% NaCl to check the purity of the enzyme; the samples were run on SDS-Polyacrylamide gel electrophoresis. The sample with the best band resolution was identified as Dolichos lab-lab and was considered for further purification.

Purification of ALP from Dolichos lab-lab:

Column purification: The sample was subjected to column chromatography on Bio-scale Mini DEAE Affi-Gel Blue Cartridge (40 mm length × 12.6 mm inner diameter, 5ml bed volume). This was done by equilibrating the cartridge in Bio-Rad application buffer and applying the sample on to it. The column was eluted with 20ml of the elution buffer and the fractions were collected. To check the purity 14 of the enzyme, the samples were run on 12% SDS-PAGE. Samples were layered on the stacking gel surface with a small volume of bromophenol blue as a tracking dye. Protein gels were stained with freshly made 0.2% Coomassie Brilliant Blue R-25O in 40% Methanol-20% water, for l-3 hours.

RESULTS AND DISCUSSION: Although the alkaline phosphatase is not present in large amounts in few seeds, the use of ion exchange chromatography steps made it possible to purify the enzyme. Ammonium sulphate precipitation appeared to be unavoidable in order to remove lipid from the extract, despite the low recovery in this step. Table 1 summarizes the enzyme activity assays and protein determinations done spectrophotometrically for each extract.

Moreover, ion exchange chromatography on a DEAE Sephadex column, calibrated using standard proteins, showed that alkaline phosphatase had a high alkaline content. For each fraction containing alkaline phosphatase, PAGE was done to check the separation of proteins. Preparative PAGE separated the two bands of enzyme. Figure 1 exploits that denaturing PAGE shows the purity of these proteins. 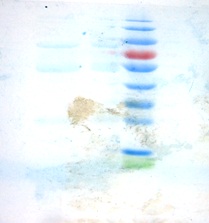 Purity of enzyme: Qualitative analysis of Dolichous lab-lab DEAE fraction was carried out using reverse phase HPLC and the chromatographic profiles showing retention time (RT) of Dolichous lab-lab and standard ALP were 1.648 and 1.63 respectively (Figure 2). The purity of the DEAE fraction shows 99%±0.2 by HPLC analysis. This is a significant purity obtained, which can be used for molecular level studies.

Dephosphorylation activity of Enzyme: Alkaline phosphatase is commonly used in cloning to remove 5'- terminal phosphate from DNA fragments. Hence, the enzyme was tested against cohesive EcoRI-linearized pUC18; the efficiency of dephosphorylation was estimated by comparing non-dephosphorylated plasmids and pUC18.

Complete ligation of non- alkaline phosphatase treated fragments was observed when the experiment was carried out using cohesive ends on agarose gel (Figure 3). 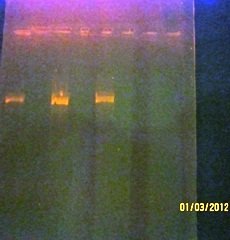 Apparent optimum pH of the alkaline phosphatase was determined to be 8.0 in 0.2 M PBS buffer for Dolichos lab-lab. The enzyme exhibited at least 60% of its optimal activity over a rather narrow pH range, from 10 to 11 (Figure 2A). Furthermore, thermal activation studies enabled the determination of an apparent optimum temperature of 60°C for Dolichos lab-lab in 0.2 M PBS buffer (Figure 2B). The influence of surfactant was also tested. Increasing concentrations of Triton-X had an inhibitory effect on enzyme activity. At 1ug of triton-x concentration, 4ug for Tween 20 and 3ug for SDS, Dolichos lab-lab exhibited an optimal activity (Figure 2C). 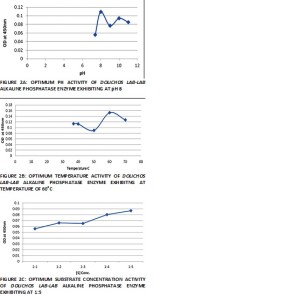 CONCLUSION: Alkaline Phosphatase activity has already been found in several seeds but the enzyme has not been well characterized for its dephosphorylation activity. Alkaline Phosphatase is commonly used in molecular biology for the construction of recombinant plasmids. They remove 5'- terminal phosphate from DNA fragments and, as such, enzyme treated linearized plasmids are unable to exhibit self-ligation and are more likely to integrate an exogenous gene insert.

ACKNOWLEDGMENT: The authors are grateful to K L University management for support and encouragement to conduct this research. The author’s also acknowledges B. Chandra Shekar and V. Sandeep, Research Scholars of Biotechnology Department for their kind assistance in this successful research work.