ABSTRACT:Riboflavin binding protein (RfBP) was isolated from the eggs of Aquila hastate (eagle). The protein was purified in two steps, DEAE – Sepharose ion exchange chromatography and gelfilteration on Sephadex G-100. The holoprotein had an absorption spectrum characteristic of flavoproteins. The purity of the protein was judged by SDS-PAGE technique. A single band on the slab and cylindrical gel revealed that the protein was pure comparison of the mobility of RfBP with that of the standard molecular weight marker proteins suggested that RfBP from the egg white of Aquila hastate had  a molecular weight close to 29 Kd.

INTRODUCTION:The eggs of oviparous species store all essential nutrients to meet the needs of the prospective embryo. Recent studies have established that vitamin binding protein from a special group of soluble protein present in eggs and other body fluids which ensure optimal bioavailability of the vitamins during growth and development.

The indispensability of RfBP has demonstrated in a study on the homozygous recessive mutant (rd-rd) of domestic foul wherein a gene mutation leading to the absence of RfBP resulted in the death the developing embryos. Further the discovery that immunoneutralization of RfBP in animals such as rats and monkeys resulted in the abrupt termination of pregnancy clearly established the functional significance and RfBP.

In the present study RfBP was purified for the first time from the Indian eagle (Aquila   hastate) egg white and compared with hen egg white RfBP. Indian eagle belongs to the rail family, Accipitridae and is about 60 cm in length with a wingspan of 150 cm.

Hen egg white RfBP was initially isolated by Rhodes et al., 1 and later RfBP was also isolated from the eggs of pigeon 2 and Peacock 3. These methods were slightly modified for the isolation of RfBP from the egg white of A. hastate (eagle).

Fractions were collected and absorbances were measured at 280 nm and 455 nm. Further purification of A. hastate egg-white RfBP was achieved by gel filtration column chromatography using Sephadex G-100. The column was equilibrated with 0.02 M phosphate buffer pH 7.3 containing 0.5 M sodium chloride. Protein in each fraction was determined by the method of 6.

A. hastate egg-white RfBP samples were dissolved in 50 µl sample buffer and kept in a boiling water bath for 2 minutes. Samples (20 µl) were loaded into the slots of SDS-PAGE slab gels. Initially electrophoresis was carried out at 15 mA for 30 minutes after which the current was raised up to 30mA. After the electrophoresis, the plates were removed from the chamber and gel was detached by flushing distilled water between the plates. The gel was stained immediately at room temperature. Later the gel was destained using the destaining solution.

RESULTS AND DISCUSSION: The peak fraction obtained after Sephadex G-100 gel filtration column chromatography was used to record the absorption spectrum using UV Visible recording spectrophotometer. As could be seen from Figure 1 the holoprotein showed absorption maxima at 376 nm and 458 nm characteristic of riboflavin apoprotein form 7.

Electrophoresis on analytical poly acrylamide gels (7.5%) was conducted at pH 8.3. The purity of the isolated protein was judged by slab and cylindrical SDS-PAGE methods. The electrophoretic pattern obtained was shown in Figure 2 and 3. A major band corresponding to RfBP was seen in the DEAE–Sepharose eluted fraction. Complete purification was achieved by gel filtration chromatography on Sephadex G-100 as a single band free from other minor contaminating proteins was obtained (Figure 2). RfBP moved as a single band on the cylindrical gels also (Figure 3). Comparison of the mobility of RfBP with that of the standard molecular weight marker proteins revealed that the RfBP had a molecular weight close to 29 Kd. 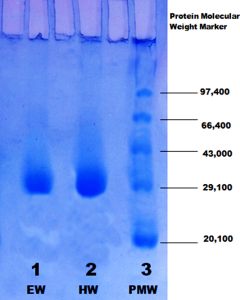 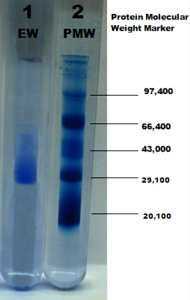 CONCLUSION: The present study clearly showed that RfBP isolated from egg white of a huge flying bird, the eagle, had an electrophoretic mobility similar to that of the domestic fowl (non flying) egg white RfBP, having a similar molecular weight, suggesting that the RfBP from these two species could be similar and mostly remained unaltered.