Categories Menu
Home » PURIFICATION AND SEPERATION OF INDIVIDUAL CURCUMINOIDS FROM SPENT TURMERIC OLEORESIN, A BY- PRODUCT FROM CURCUMIN PRODUCTION INDUSTRY

PURIFICATION AND SEPERATION OF INDIVIDUAL CURCUMINOIDS FROM SPENT TURMERIC OLEORESIN, A BY- PRODUCT FROM CURCUMIN PRODUCTION INDUSTRY

PURIFICATION AND SEPERATION OF INDIVIDUAL CURCUMINOIDS FROM SPENT TURMERIC OLEORESIN, A BY- PRODUCT FROM CURCUMIN PRODUCTION INDUSTRY.

ABSTRACT: Turmeric, curcuma longa L of Zingiberaceae family is a widely cultivated spice in India and other Asian countries. Turmeric is rich in curcuminoids, and recognized for their broad spectrum of biological activities, curcuminoids vary in chemical structures, physico-chemical characteristics as well as the functional properties. This study focused on separation of individual curcuminoids from spent turmeric oleoresin considered as an industrial waste and its purification by column chromatography followed by purity analysis by HPLC.   Chromatographic purification of spent turmeric oleoresin was done with Diaion HP 20 resin, fractions were collected. Curcuminoid enriched oleoresin fractions combined & then subjected to hexane precipitation, purified curcuminoid enriched fraction obtained. Purified curcuminoid enriched fraction subjected to silica gel column chromatography to separate the individual curcuminoids with chloroform: methanol at increasing polarity. 10ml each 40 fractions were collected and TLC profile done. Same Rf fractions collected & evaporated. Total curcuminoids of individual fractions were determined by HPLC. Recrystallization of each compound was done using methanol: chloroform (5:1) at 3°C. Curcumin, Demethoxy curcumin, Bisdemethoxy curcumin having purities 98.4%, 97.1%, 97.3% are separated from the spent turmeric oleoresins. The above study reveals that the spent turmeric oleoresin being wasted at present can be used to isolate and seperate the remaining curcuminoids.

INTRODUCTION: Phytochemicals are non – nutritive plant chemicals that have protective or disease preventive properties. It is well known that plants produce these chemicals to protect themselves but recent research demonstrates that they can also protect humans against diseases.

There has been considerable public and scientific interest in the use of phytochemicals derived from dietary components to combat human diseases, especially the two commonest killers in the developed world, cardiovascular disease and cancer.  Curcumin is one such medicine. Its history goes back over 5000 years , to the heyday of Ayurveda ( which means the science of long life) 1.

Turmeric (Curcuma longa) a rhizomatous herbaceous perennial plant of family Zingiberacea, has been used  for centuries in Indian and Chinese traditional medicine for the ailment of various diseases, including biliary disorders, anorexia, Cough, Diabetic wounds, hepatic disorders and sinusitis 2-5.It is a spice of golden color that is used in cooking in the Indian subcontinent .Because of its color and taste , turmeric was named Indian saffron in Europe.

Today, india is the primary exporter of turmeric (known as haldi in india). Although its ability to preserve food through its antioxidant mechanism , to give color to food, and to add taste to the food is well known, its health promoting effects are less well recognized or appreciated. Turmeric being anti microbial, is used extensively for cosmetic applications. Turmeric is the only spice which finds application in all the three segments of life- food, cosmetics and health. In ayurveda medicine , turmeric has a long history of use for its anti –Inflammatory and anti – arthritic effects 6.

Curcumin (C), main coloring substance in Curcuma longa and two related compounds, demethoxycurcumin (DMC) and bisdemethoxycurcumin (BDMC), are altogether known as curcuminoid  . The chemical structures of three curcuminoids and its molecular mass are shown in Fig. 1 and table 1 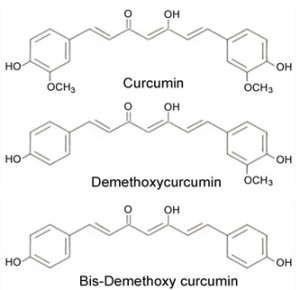 The total of curcuminoids which is about 7-10%, turmeric also contains 2-4% essential oil, including turmerone, atlantone, and zingiberone and 2-3% of fixed oil. Other constituents include sugars, proteins and resins. Curcumin was first isolated from turmeric in 1815, and the structure was delineated in 1910 as diferuloylmethane. Most currently available preparations of curcumin contain approximately 70-77% diferuloylmethane, 14-18% demethoxycurcumin and 3-5% bisdemethoxycurcumin.  Curcumin is hydrophobic in nature and frequently soluble in dimethylsulfoxide, acetone, ethanol, and oils. It has absorption maxima around 420nm. When exposed to alkaline conditions, the color of  curcumin turns from yellow to deep red, and the form in which it is used routinely for various religious ceremonies 7.

Curcumin is unstable at basic pH, and degrades within 30 min to Trans-6-(40-hydroxy-30-methoxyphenyl)-2, 4- dioxo-5-hexanal, ferulic acid, feruloylmethane and vanillin . Under acidic conditions, the degradation of curcumin is much slower, with less than 20% of total curcumin decomposed at 1 hr 8. The dried roots of turmeric, which have been used for centuries as a spice ( Curry), food preservative and a colouring agent have been found to be a rich sources of phenolic compounds (curcuminoids) with versatile biological mechanisms. The content of total curcuminoids in turmeric powder plays an important role in its antioxidant activity and effectiveness of the product .The content of curcuminoids may vary in turmeric rhizome grown in different agro-climatic zones 9 .Curcumin acts as a free radical scavenger and antioxidant, inhibiting lipid peroxidation and is a well known hepatoprotective protects the liver from damages caused due to alcohol consumption  10 .

Curcuminoids are recognized for their broad spectrum of biological activities, the potential use of curcumin in the prevention of cancer is the subject of intensive laboratory and clinical research 11,12,13. Recently it was reported that the effect of curcuminoids was examined on the proliferation of MCF-7 human breast tumour cells that demethoxycurcumin was the best inhibition of MCF-7 cells followed by curcumin and bisdemethoxycurcumin 14. Many of these properties could be enhanced through improving bioavailability of curcuminoids by different approaches and subject of intensive laboratory and clinical research 15, 16.

Eventhough, curcumin has more pharmacological properties, the amount of total curcuminoids absorbed by the animal systems far less. Small doses of turmeric (curcumin) are taken daily as a spice by the population in many Asian countries. In one epidemiologic survey, in terms of its dietary use in Nepal, turmeric consumption was found to be up to 1,500 mg per person per day, equivalent to approx. 50 mg/day of curcumin 17 . In India, where the average intake of turmeric can be as high as 2,000–2,500 mg per day (corresponding to approx. up to 100 mg of curcumin), no toxicities or adverse effects have been reported or studied at the population level 18.

However the doses administered in clinical trials are expected to be rather higher than those normally consumed in the diet. This fact underlines the need for systematic safety and toxicity studies. Based on repeated studies, turmeric is Generally Recognized As Safe (GRAS) by the US FDA, and curcumin has been granted an acceptable daily intake level of 0.1–3 mg/kg-BW by the Joint FAO/WHO Expert Committee on Food Additives, 1996.

In the systematic studies funded by the Prevention Division of the US National Cancer Institute (NCI) conducted in rats, dogs, or monkeys and at oral doses of curcumin up to 3,500 mg/kg-BW for up to 90 days, no adverse effects were observed. In a preclinical study involving the administration of 2% dietary curcumin (approx. 1,200 mg/kg-BW) to rats for 14 days 19, 20 or in a study of 0.2% dietary curcumin (approx. 300 mg/kg-BW) administered to mice for 14 weeks, no toxicity was observed 21.

Furthermore, a reproductive toxicity study with the oral curcumin administration of up to 1,000 mg/kg-BW daily, no toxicity was observed in two successive generations in rats 22. Curcumin is an approved food colouring agent in addition to a dietary item. In spite of reported minor adverse effects, large doses of up to 12,000 mg per day of curcumin were found to be well tolerated in humans. Therefore, based on the safety and toxicity profile, in several clinical trials the targeted doses for curcumin can be recommended in between 4,000–8,000 mg to obtain the maximum therapeutic effects 23 .

Literature studies have shown that the extraction of curcumin from turmeric could be done in several different ways. The curcuminoids are not water-soluble and therefore extractions have to be made in non-polar solvents. In previous studies hexane, acetone, ethylene dichloride and different alcohols have been used to extract the curcumin analogues. It has been shown that the best yield from dried turmeric was has been obtained from the attempts where the extraction is made by acetone 24.

Turmeric oleoresin (TO) contains 25-35% curcuminoids and a major portion of the TO prepared in the world has been used to isolate curcuminoids. The essential oil extracted from TO has been reported to have antibacterial , antioxidant and antifungal activities 25. After the partial separation of curcuminoids, the remaining oleoresin (mother liquor) known as spent oleoresin (STO) is considered as an industrial waste and used as fuel in boilers. Previous studies showed that still some more amount curcumin present in the STO  26. Spent turmeric oleoresin has anti diabetic and anti oxidant activity 27.

A number of studies are undertaken to separate curcuminoid pigments by thin layer chromatography (TLC), high-performance thin-layer chromatography (HPTLC), and column chromatography (CC). The stationary phase most commonly used is silica gel with different solvent systems including benzene, ethyl acetate, ethanol, chloroform, acetic acid, hexane, and methanol for chromatographic separations 28. HPLC method was sensitive, precise and accurate for detection and quantification of curcuminoids in the extract of rhizome Curcuma longa.

Separation by high-performance liquid chromato-graphy (HPLC) was done mostly on reverse phase employing mixtures of water, acetonitrile, ethanol, and methanol . Since the curcuminoid pigments vary in chemical structures, it is possible that the physico-chemical characteristics as well as the functional properties would vary among them. As compounds DMC and BDMC are not commercially available, it could be important to obtain these pigments in high purity for detailed studies on their chemical and physiological attributes . Therefore it is important to obtain pure pigments and characterize them individually to study their biological properties 29.

1)      Preparation of standard: Weighed accurately 10mg of standard curcuminoids and dissolved in 25ml methanol. Pipetted out 1 ml and diluted to 5 ml with methanol. Filtered through 0.2µm membrane filter before injection.

2)      Preparation of Sample: Weighed accurately  25mg sample and dissolved in 25 ml methanol. Pipetted out 1ml  and diluted to 5ml with methanol.  Filtered through 0.2µm membrane filter before injection.

3)      Chromatographic conditions : Samples were analysed by HPLC in a shimadzu LC 30AD  liquid chromatograh system with SPD M-20A   PDA detector in isocratic mode. The instrument is equipped with an auto sampler.20ul of sample was injected with a flow rate of 1 ml/ min at 250c.Column used was Supelco Discovery HS C 18   250X4.6mm  5µm particle size. Mobile phase used was  Acetonitrile, Water, Orthophosphoric acid in proportion of  (50:50:0.1) v/v.

The crystals obtained were separated by filtration. The purity of Individual crystals were analysed by HPLC.

RESULTS AND DISCUSSIONS: Curcuminoids have immense biological properties in which curcumin (C) is reported for most of the medicinal properties. It has been used to cure various ailments including cancer, Parkinson, Alzheimer and HIV 30, 31. Recently the analogs of curcumin were reported for its biological activities, Demethoxycurcumin (DMC) showed the best inhibition of MCF-7 cells. Bisdemethoxycurcumin (BDMC) was active for modulation of MDR-1 gene expression 32. These compounds are not commercially available due to the difficulty in fractionation. Therefore to study biological properties of individual curcuminoids we need to isolate compounds at high purity. Our present study throws light for obtaining individual curcuminoids with high purity from spent turmeric oleoresin which is considered as Industrial waste in curcumin production industry.

The HPLC profile of spent turmeric oleoresin (STO)  taken for isolation had 18% total curcuminoids,  of which curcumin (C), and its analogues DMC and BDMC are 4.4%, 4.9% and 8.7% respectively. Curcuminoid in the spent turmeric oleoresin enriched from 18% to 34.1% by purification using Diaion HP 20 as adsorbent and 80% methanol as eluent. The curcuminoid content of eluted fractions are shown in table 2.

Hexane precipitated product  filtered and dried, to obtain curcuminoid enriched fraction with a yield of 31% with respect to spent turmeric oleoresin. 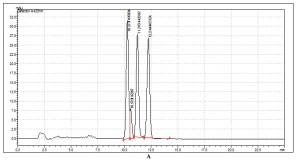 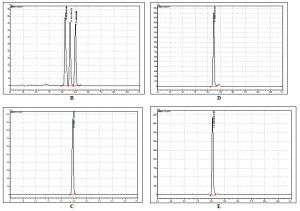 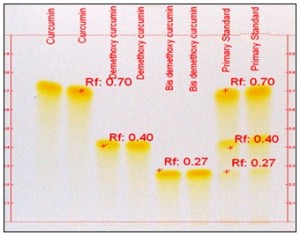 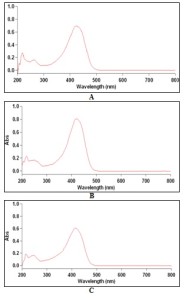 CONCLUSION: Demethoxy curcumin and Bis demethoxy curcumin in pure form commercially not available. A method developed for separation of 3 curcuminoids from spent turmeric oleoresin - which is now considered as  an industrial waste in curcumin production industry . The new process developed is simple and  economical to adopt.