ABSTRACT: Quality by Design (QbD) has become an important concept for the pharmaceutical industry, and ICH recommends this concept through the Guideline Q8 (R2) wherein if the method is proved to be rugged and robust within the limits of a Design Space then approval may be requested for such a Design Space, and the method does not need redevelopment, revalidation, and reapproval during transfers, thereby saving significant time and resources. In this study, the QbD approach was used to develop a reverse-phase–high-performance liquid chromatography (RP–HPLC) method that could be applied for the estimation of several antibacterial agents of the fluoroquinolone group. The method was applied to five selected fluoroquinolones, namely, ciprofloxacin, levofloxacin, norfloxacin, moxifloxacin, and ofloxacin. The method developed used C18 column of make Phenomenex (250 mm × 4.6 mm, 5 μm) with mobile phase comprising of methanol and phosphate buffer (pH 3.0) in the proportion 70:30 at a flow rate of 1.25 ml/min and detection was carried out using a PDA detector at 294 nm. The method while being validated as per ICH guidelines, using ANOVA, simultaneously created a design space which set limits for critical attributes affecting the robustness. Any variations in these parameters within the design space does not affect method performance, making the method easily transferrable.

INTRODUCTION: The fluoroquinolones (FQs) are a family of broad-spectrum, systemic antibacterial agents that are being used widely for the treatment of respiratory and urinary tract infections. The first quinolone was reported in the early 1960s, with the isolation of 7-chloro-l-ethyl-1, 4-dihydro-4-oxyquinoline-3-carboxylic acid, a by-product of the commercial preparation of chloroquine.

Since, this particular substance was discovered to have anti-bacterial activity, it was used to produce nalidixic acid, which is a 1, 8-naphthyridine 1. After the passage of many decades, the members of this class, even the older agents are still finding a use for various treatments 2, 3. The concept of Quality by Design has gained a lot of importance in Pharma Industry, and any analytical method developed using QbD principles does not need redevelopment, revalidation, and reapproval during transfers, provided one work within the limits of the approved Design Space, thereby saving time and resources 4.

The work reported here describes our efforts towards using QbD principles and creation of a Design Space as recommended by ICH Q8 (R2) in the development and validation of a common analytical method for five selected FQs, namely, ciprofloxacin (CIP), levofloxacin (LEV), moxifloxacin (MOX), norfloxacin (NOR) and ofloxacin (OFL), the chemical structures of which have been shown in Fig. 1. A literature survey did not reveal any common method for these five FQs. Most of the reported analytical methods aimed at simultaneous estimation of FQs making the method complicated, involving gradient elution and fluorescence or other highly sophisticated detection and quantitation methods 5, 6, 7, 8, 9. As such, even though one often deals with multiple members of this class, they are not used in combination with each other. Hence, it was thought to develop an analytical method which was simple and quick and could be commonly used for the majority of the class. The method has been developed and validated as per ICH guidelines10 and using QbD approach 11, 12, 13, 14. 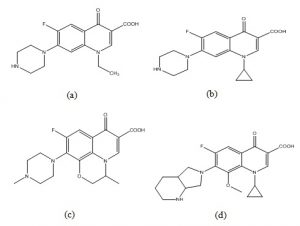 FIG. 1: STRUCTURES OF (A) NOR, (B) CIP, (C) OFL AND LEV* AND (D) MOX. *LEV is levorotatory whereas OFL is a racemic mixture, having the same chemical structure

The experimental work was performed at the Central Instrument Laboratory of Goa College of Pharmacy, Panaji, Goa, India.

Chromatographic Conditions: The HPLC system used was Jasco CO-4061 with Autosampler (AS-4050) and a PDA detector and built-in degasser. The system used ChromNav software.

The mobile phase used was 70 parts methanol and 30 parts buffer. Phosphate buffer pH 3.0 was prepared by dissolving Potassium dihydrogen orthophosphate in water and adjusting the pH to 3.0 by using orthophosphoric acid. Mobile phase components were sonicated for 15min and filtered through 0.45µ membrane filters before use.

The flow rate was maintained at 1.25 ml/min and a detector set to wavelength 294 nm. Autosampler used had variable loop volume 0-100 µl, and in this method, 20 µl was injected. The system had a column oven making it possible to program column temperatures during the run. After a trial at various temperatures, it was decided to set the column temperature at 40 °C throughout the method.

Optimized chromatographic conditions for selected fluoroquinolones are shown in Table 1.

Selection and Preparation of Mobile Phase: Mobile phases containing methanol, water, acetonitrile, and buffers at different pH were tried in different proportions and at different flow rates. Satisfactory peaks were obtained at a flow rate of 1.25ml/min with a mobile phase made up of 70 parts methanol and 30 parts of phosphate buffer pH3.0. The 20 mM buffer was prepared by dissolving 2.72 gm of potassium dihydrogen orthophosphate per liter of buffer solution and adjusting pH to 3.0 by using orthophosphoric acid with the help of pH meter. Both components of the mobile phase were filtered through 0.45µm membrane filters by application of vacuum and sonicated for 15 min before introducing into the system.

Preparation of Calibration Curve: Volumes of standard stock solutions of each drug were transferred to a 10 mL volumetric flask and diluted up to the mark with methanol. Aliquots were taken in such a way to obtain final concentrations in the range of 10-60 μg/mL for each drug.

Three injections of 20 µl of each concentration were analyzed using optimized conditions. Each reading or peak area recorded was average or meant of three readings.

Method Validation: The method developed was validated as per ICH guidelines by evaluating parameters such as accuracy, precision, linearity, robustness, ruggedness, detection, and quantification limits. The results were evaluated considering acceptable limits as less than 2% for Relative Standard Deviation (RSD).

Accuracy: The accuracy of the method was tested for each of the drugs by spiking a known concentration of each drug at three different concentration levels, namely 80%, 100%, and 120%, and then comparing the difference between the expected/theoretical value and the concentration determined by the method.

Linearity: A stock solution of 1000 μg/mL in methanol was prepared for each drug, namely, CIP, LEV, MOX, NOR, and OFL. From this stock, working standard solutions were prepared for each of the drugs, in the range of 10 to 60 μg/mL and injected into the HPLC system. It was proved that each drug shows linearity in the range of 10–60 μg/mL. The calibration graph (obtained by plotting peak areas of the drug under consideration versus its concentration) was generated by replicate analysis at all concentration levels, and the linearity of the relationship was established using Microsoft Excel® program.

Robustness and QbD Approach to Designate Critical Attributes: Robustness of the developed method for selected fluoroquinolones was confirmed by checking the effect of variation in critical parameters, namely, flow rate, pH and proportion of mobile phase components. ANOVA was applied to statistically prove robustness.

Detection and Quantification Limit: The limit of detection (LOD) and limit of quantification (LOQ) were calculated based on the linearity curve plotted. The formulae used for computing these values were:

Where σ is the standard deviation of the y-intercept of the regression line, and s is the slope of the calibration curve.

Chromatographic Separation: After a number of trials, chromatographic conditions were optimized and selected based on System Suitability parameters.

The optimized chromatographic conditions are reported in Table 1. 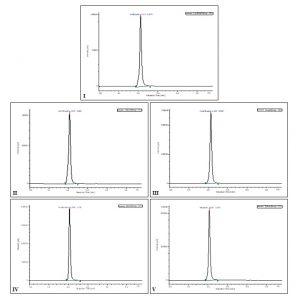 System Suitability parameters for each drug were checked and are tabulated in Table 2.

Calibration Curve: The correlation coefficients (R2) for each of the three drugs under consideration and also the linearity equations are displayed in Table 3.

Method Validation: The method was validated and applied to marketed formulations. The results are reported in Table 4.

*Performed on marketed formulations; **Proved through the application of ANOVA

Creation of Design Space for Critical Attributes through QbD:

Identification of Critical Attributes and their Range: The critical attributes in designing a robust and easily transferrable method were identified and tested over ranges, as shown in Table 5.

The f- ratio shows that there is no significant difference in results of the method if one works within the Design Space studied, thus displaying that method need not be redeveloped and revalidated during transfers.

TABLE 6: APPLICATION OF ANOVA TO PROVE ROBUSTNESS OF EACH CRITICAL ATTRIBUTE (CA)

DISCUSSION: In the reported research work, the RP-HPLC analytical method for the selected fluoroquinolones was developed and validated as per the ICH guidelines. Since all the validation parameters checked were within limits, the method was considered successfully validated.

By applying ANOVA as a form of statistical analysis for validating robustness, it was proved that any variation within the tested Design Space did not bring about any change in validity and effectiveness of the method. Since, the result was not significant at p<0.01, we accept the null hypothesis that within this range there is no significant difference in the results, thereby proving that changes within the Design Space do not need revalidation of the method.

CONCLUSION: The developed RP–HPLC method was found to be suitable for the analysis of selected fluoroquinolones, namely, CIP, LEV, MOX, NOR, and OFL, in bulk form, as well as in marketed formulations like tablets. The method was found to be simple, quick, sensitive, economical, reliable, and precise. A Design Space was simultaneously created setting limits for critical attributes affecting the robustness. Any variations in parameters within the Design Space did not affect method performance, making the method easily transferrable without additional expenditure of time or money. This method can, therefore, be useful as a common and easily transferrable method for estimation of any of the selected fluoroquinolones, in bulk form or pharmaceutical dosage forms. This HPLC method will prove to be advantageous for laboratories handling numerous fluoroquinolones, especially since the method may be transferred without the need for revalidation within the Design Space.

ACKNOWLEDGEMENT: The authors are grateful to the Principal of Goa College of Pharmacy, for providing the facilities for working and to Abaris Healthcare Pvt. Ltd., Ahmedabad, Gujarat, India for supplying the pure drugs as gift samples.