γ-secretase is a membrane-embedded multiprotein complex consisting of at least four components; the Presenilin (PS) heterodimer, Nicastrin, Anterior Pharynx Defective (APH-1) and Presenilin Enhancer-2 (PEN-2) 18. Another reasons for Alzheimer disease includes destruction of cholinergic neuron due to oxidative stress and or decrease in level of choline acetyl transferase 19, genetic mutations.

APP is cleaved by α or β-secretase followed by γ-secretase to release P3 or Aβ peptides, respectively. Since β-secretase and γ-secretase are responsible for the production of amyloid peptide (Aβ), which is believed to play a central role in the neuropathology of Alzheimer’s disease 20, 21. There is an urgent need to design γ-secretase inhibitors with higher bioactivities and also need to analyze the correlation between gamma secretase inhibitors activity and physico-chemical parameters of each category of compounds using the Quantitative Structure Activity Relationship (QSAR) methods because the quantitative analysis of such molecules can be utilized for increasing the potency and minimizing the side effects.

MATERIALS AND METHODS: QSAR studies and designing were performed on a computer using the software VLifeMDS 3.5 (V-life sciences technology Pvt. Ltd. Pune, India). For the QSAR studies a series of 47 compounds based heterocyclic sulfonamide was selected in which 36 compounds having definite γ-secretase inhibitory activity 1. The biological activity log (1/EC50 or –log EC50) was calculated, subsequently used as dependent variable for the QSAR studies. The structure of the compounds with new code and biological activity was shown in table 1 (1a, 1b and 1c).

TABLE 1: LIST OF COMPOUNDS USED FOR THE QSAR STUDIES OF γ-SECRETASE INHIBITOR ACTIVITY

Energy minimization: Energy minimization 22 is the process of changing the geometry of a structure to reduce its energy. Lower the energy states are of interest because molecules preferentially adopt them. Consequently, they are more indicative of molecular behavior than their high energy neighbors. In many situations it is necessary to know about the thermodynamic properties like enthalpies, entropy, free energy and forces between atoms. The energies and optimized geometries of a molecule can calculate by using different force field and quantum mechanical methods. The force field method is to provide information about molecular structure, interaction between atoms in a molecule. The mathematical formulation of a typical molecular mechanics force field which also called the Potential Energy Function (PEF)23, the potential energy function is a sum of many individual contributions (energy). It can be divided into bonded (Bond stretching, Angle bending, Torsions, Inversion (out of plane bending)) and non-bonded (Electrostatics, Van der waals forces, Hydrogen bonding) contribution, responsible for intramolecular and intermolecular interaction between atoms. There are many force field methods to calculate the energies and optimized geometries of molecule like universal force field (UFF) 24, 25, Merck molecular force field (MMFF) 26-29.

Stepwise Forward Backward Method: In stepwise procedure a variable that entered the model in the earlier stages of selection may be deleted at the later stages. The calculations made for inclusion and elimination of variables are the same as forward selection and backward procedures. That is the stepwise method is essentially a forward selection procedure, but at each stage the possibility of deleting a variable, as in backward elimination, is considered. The number of variables retained in the model is based on the levels of significance assumed for inclusion and exclusion of variables from the model 30.

Statistical Method: Regression methods are used to build a QSAR model in the form of a mathematical equation. This equation explains variation of one or more dependent variables (usually activity) in terms of independent variables (descriptors). The regression method (MLR) is the QSAR molecular models that were used to predict and design a compound with best possible inhibitory property.

The resulted MLR equations could describe the structure activity relationships well. However, due to the co-linearity problem in MLR analysis, we removed the collinear descriptors before MLR model development. Therefore, some information was discarded in MLR analysis 31-37.

In all model the max of training is higher than the test set where as in case of min. the test have high value than the training set. In all models the std. deviation lies in between 0.31 to 0.83.

From the observation table it was seen that few descriptors has strong correlation with each other which has been given in the shaded portion of the table. Descriptor present in the individual model does not show correlation more than 0.5 with each other.

Equations of the various models:

T_2_N_8:- This is the count of number of double bounded atoms (i.e. any double bonded atom, T_2) separated from Nitrogen atom by 8 bonds.

T_C_O_10:- This is the count of number of Carbon atoms (single double or triple bonded) separated from any Oxygen atom (single or double bonded) by 10 bonds distance in a molecule.

T_C_C_6:- This is the count of number of Carbon atoms (single double or triple bonded) separated from any Carbon atom (single or double bonded) by 6 bonds distance in a molecule.

TABLE 5: PREDICATED ACTIVITY OF MODEL-1, 2 AND 3 GENERATED DURING 2D QSAR OF γ-SECRETASE INHIBITORS 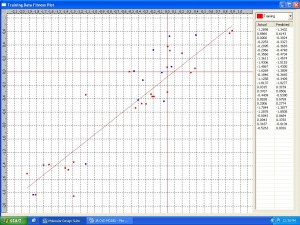 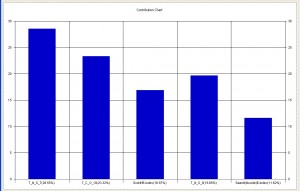 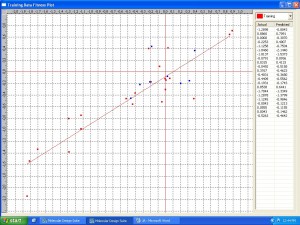 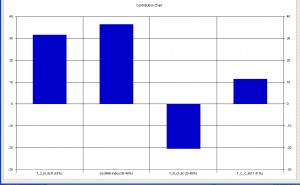 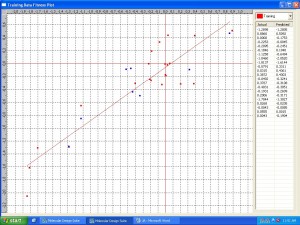 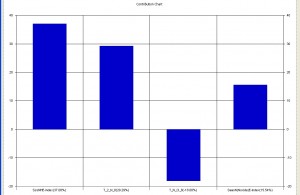 Interpretation of 2D equations: There are many type of descriptor that are found in 2D QSAR but only 4 descriptors are found to be strongly correlated with the biological activity. The common descriptors in 2D QSAR models of heterocyclic sulfonamide are SssNHE-index, T_N_S_7, T_N_Cl_8 and T_2_N_8.

The contribution of SssNHE-index in all models is positive means it has positive contribution with the activity. The values of SssNHE-index are 16.87%, 36.48% and 37.08% in model-1, 2 and 3 respectively. This descriptor provides importance of NH groups that are connected with two single bonds. The compound J14 and J15 was not possessing SssNHE-index in the structure and has most poor the biological activity. So increase the NH group or addition of NH group in the molecule will lead to increase in activity.

The contribution of T_N_S_7 descriptor was found to be 28.55% in model-1. The importance of this descriptor was found be presence of nitrogen atom that was separated from sulphur by 7 bonds. In complete series sulphur is present in the thiophene ring and nitrogen present on pyrazole ring. So these nitrogen and sulphur are separated by 7 bonds and contribution is positive that indicates the 7 bonds difference between nitrogen and sulphur is required for the biological activity. Hence, this descriptor (SssNHE-index and T_N_S_7) is used for the designing of the molecule.

From the figure 1 and 2, the alignment of thiophene core has been achieved this leads to calculation of descriptors (Electrostatic and steric) from the non-align area of the molecule. The data that was obtained after the alignment of 30 molecules was shown in table 6. 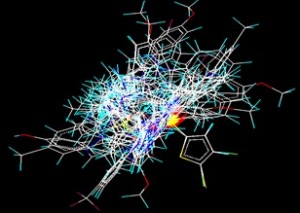 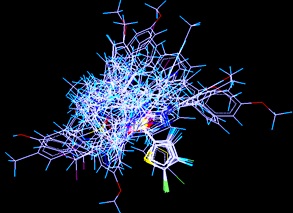 TABLE 6: ALIGNMENT RESULTS OF 30 COMPOUNDS BY USING THIOPHENE AND THIOPHENE-2-SULPHONAMIDE AS Γ-SECRETASE INHIBITOR 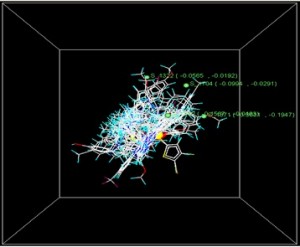 Designing of potent γ-secretase inhibitor: On the basis of 2D descriptor SssNHE-index the –NH group is required for the activity in new design compound (Table 8). According to positive contribution value of T_C_C_6 is required for activity; means addition of chain length is helpful for activity of new design compound. Other descriptors like T_N_S_7 and SaasN(Noxide)E-index are also responsible for the activity. 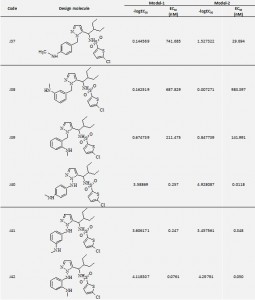 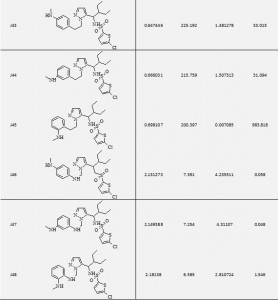 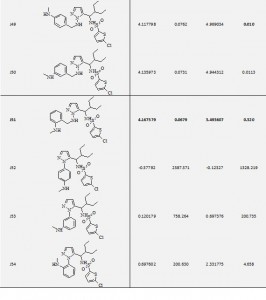 CONCLUSIONS: γ-secretase is membrane-bound proteases that process amyloid precursor protein (APP). APP is cleaved by γ-secretase to release Aβ peptides. Since γ-secretase are responsible for the production of amyloid peptide (Aβ), which is believed to play a central role in the neuropathology of Alzheimer’s disease (AD). QSAR is a branch of computational chemistry that provides the knowledge structure properties of the molecule and helps to correlate the structural properties and the biological activity via linear regression.

For designing of potent molecule as γ-secretase inhibitor the suggestion provided are same i.e. increasing NH group (from 2D QSAR) and steric properties (from 3D QSAR). On this basis we have design 18 compounds. For validation of model-2 was found in J49. For validation of model-1 was found in J51. In both structure J49 and J51 we have increase the NH group connected with two single bonds. Structure J49 has the highest potency {EC50 = 0.000010 µM (0.010nM)} in the design molecule whereas reported series have (EC50 = 0.13 µM).

ACKNOWLEDGEMENTS: It is a great pleasure for me to acknowledge to Head of the Department Dr. A. K. Pathak (Department of Pharmacy Barkatullah University Bhopal, M.P. India), for providing me an opportunity to work under whose kind control, the smooth completion of my project became possible. I would like to express my heartful gratitude to Mr. A. B. Mundada, for their precious suggestions.