ABSTRACT: Polychlorinated dibenzo-p-dioxins(PCDDs) and Polychlorinated dibenzofurans(PCDFs) represent a large group of industrial and byproduct compound is resistance to chemical and biological degradation and highly toxic.A series of 18 PCDD and  PCDF compounds is subjected to QSTR studies by using differnt molecular descripters. The dependent variable used in this study represents log(EC50) values (EC50-median effective concentration during a bioassay).The regression analysis of the data has shown that the toxicity of the compound can be modeled excellently in multi-parametric model.Its resulting model exhibited good R2value up to 0.8938. The present work contribute in the identification of those compounds which are very toxic and polluting our environment.

INTRODUCTION: QSTR andQSAR studies have often been carried out by using regression analysis the biological toxicity are being modeled using a set of molecular descriptor. In an earlier, report by Mihaela Caprioara and Mircea V Diudea1a QSAR studies on a group of some polychlorinated aromatic compounds.

The introduction of chlorine in PCDD and PCDF gives rise to the more potent pharmacophore.Due to their lipophlic nature PCDD and PCDF concentrate in adipose and hepatic tissues and can persist in an individual for extended lengths of time.With heavier congeners,it may stay with an individual for decades because they are resistant to thermal,metabolic and environmental breakdown.

These are persistant organic polutants(POPs) that can enter water bodies and eventually sink into the sediment through various transporation routes.These POPs havebeen of a great concern due to their elevated concentrations and wide distribution;they pose not only an environmentel risk through accumulation in human tissues and fluids2-5.

In QSAR, we seek to uncover correlations of biological activity with molecular structure with Quantative structure activity relationship (QSPR); we extend the same notion to general chemical property predication and just biological activity. In either case, the relationship is most often expressed by a linear equation that related molecular properties, X, Y .......to the desired activityAi for compounds i.

Where m, n and o are the linear slopes that express the correlation of the particular molecular property with the activity of the compound and b is a constant. If only one molecular property is important, for example molecular volume, than above eqn. reduces to the simple form of a straight line, Ai = mxi + b. The slopes and the constant are often calculated using multiple linear regression (MLR) which is analogous with regular linear regression when there is just one independent variable. In constructing graph theoretical schemes to traditional QSAR methods 10the graph theoretical approach involves (a rather small set of) structural or graph invariants.

The authors have developed a QSTR models to predict toxicity of some PCDD and PCDFderivatives. The negative logarithm ofEC50 (logEC50) was used as the biological activity in QSAR studies.

Methodology: This methodology used is to transform the chemical structure in to its molecular graph. This can be done by depleting all the Carbon- hydrogen atom as well as hetro atom hydrogen bonds of chemical structure. In the present investigation, initially, we have used a set of distance based topological indices and physico-chemical parameter.

Statistical Analysis: Based on our earlier studies we have used the  Correlation and Rregression Analysis 11-12.

Molecular Descriptors: The topological parameterWinner indices(W)andBalban indices(J) in MFA-QSAR equation  specify the regions of different compounds in the training set, leading to either an increase or decrease in activities 13.

Where M is the number of bonds in a graph G and µ is the cyclomatic number of G.

RESULT AND DISCUSSION: The basic PCDD and PCDF pharmacophore used in the present studies is shown in table 1.

TABLE 1: STRUCTURE OF COMPOUNDS ACTIVITY AND THEIR MOLECULAR DESCRIPTORS

The correlation matrix as recorded in table 2 is important in the sense that it represents inter relationship between the observed value of the variable on one side and its estimated value expressed in terms of the dependent variables on the other. These tables show that multiparametric model involving pair is good.

Thenumbers accompanying descriptors in the equation represent their positions in three-dimensional MFA grid. We have carried out step wise multiple regression analysis for modeling of compound no. 18. 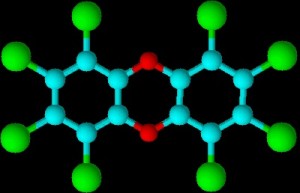 FIG. 1: ALIGNMENT OF THE COMPOUNDS 18 USED IN THE TRAINING SET OF QSAR ANALYSIS

In order to confirm the above-mentioned finding we have estimated Q-value and observed that it is highest for model. At this stage, It is interesting to comments an adjustable R2 ( ) Coefficients. It takes into accounts of adjustment of R2 therefore If a variable is added that does not contribute its fair share, the  will actually decline. If  always increases then an independent variable is added. On other side  will decreases, this means the added variable does not reduce the unexplained variation enough to offset the loss of degrees of freedom. In our case,  value increases with increasing number of parameters. This indicates that the new parameters have a fair share in the proposed model. Further support in out favors in obtained by estimating EC50 and compares the same with observed EC50 value. Such a comparison is demonstrated in table 4. We observed that the estimated value is very close to theobserved values.

The most active molecule no-18 was used for MFA model. A common substructure-based alignment was adopted in the present study, which attempted to align molecules to the template molecule on a common backbone. Finally, we have plotted a graph between observed and calculated value, which yielded predictive correlation co-efficient. 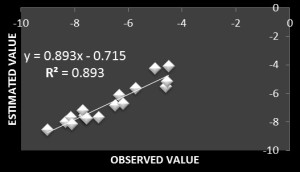 CONCLUSION: On the basis of above observation it leads to the conclusion that the activity logEC50 of the present set of compounds can be successfully modelled using molecular descriptors. It was also observed that out of the molecular descriptors used α, β, W and J   are most useful for this purpose. The MFA equation suggested that (-ve)sign of descriptor is disfavour the activity while (+Ve) sign of W and J parameters indicated that they favored activity.

ACKNOWLEDGEMENTS: One the author (Kumar Nandan) is highly obliged and thankful Dr.Sunita Gupta, dept. of chemistry, A.P.S. University Rewa,India, for introducing him to the fascinating field of Chemical Topology, Graph Theory and statistical work