QUALITATIVE, QUANTITATIVE EXPLORATION OF PHYTOCHEMICALS AND DETERMINATION OF ANTIBACTERIAL ACTIVITY OF SARGASSUM WIGHTII

QUALITATIVE, QUANTITATIVE EXPLORATION OF PHYTOCHEMICALS AND DETERMINATION OF ANTIBACTERIAL ACTIVITY OF SARGASSUM WIGHTII

ABSTRACT: Marine carbohydrates play a crucial role in drug development and disease eradication as it is suggested as a promising bioactive material for its various properties. Seaweeds are the marine macroalgal source that contains a large amount of sulfated polysaccharides. Sargassum wightii (S. wightii) is one of the seaweed which possesses a wide range of pharmacological actions. The aim of the present work is to qualitatively quantitatively analyze the phytochemical substances and screen the antibacterial activity of S. wightii. The study is accomplished with chloroform and methanolic extracts of S. wightii. Among this, methanolic extract of S. wightii shows the presence of more phytochemicals and a substantial antibacterial activity. Quantitative analysis showed the presence of flavonoid content more. Antibacterial activity was more for gram-negative bacteria. Analysis of phytochemical substances and anti-bacterial activity determination reflected significant results. Hence further observations and studies on this macroalgae could bring out promising results in the future for the welfare of mankind.

Seaweeds are microscopic marine algae, which are the rich source of structurally novel and biologically active secondary metabolites that might represent useful leads in the development of new pharmaceutical agents and are used in different pharmaceutical industries, especially in pharmaceutical compound production.

Agar and alginates, like polysaccharides which are extracted from marine organisms, have several applications in food production and cosmeceutical industries. Because of their high health benefits, compound-derived extracts of marine poly-saccharides also possess applications. If much attention is paid to unravel the structural, compositional, and sequential properties of marine carbohydrates in the future, it would become a milestone in the exploration of various health benefits for the upcoming generations 1. Sargassum is one of the marine macroalgal genera belonging to the family Sargassaceae and is widely distributed in tropical and temperate oceans. It is a large, economically important, and ecologically dominant brown algae present in much of the tropics, and a wide range of bioactive properties have been reported from this species. It is widely distributed in India and many parts of Asia, and it is reported to be used as animal feed, food ingredients, and fertilizer. Sargassum wightii shows a good amount of phenols and flavonoids, which support its antimicrobial activity, indicating that this genus is an ideal target Sargassum wightii for exploring the presence of biomolecules for various medical and industrial applications 2. Hence, the present work is to evaluate the phytochemical analysis and the antimicrobial activity of seaweed, Sargassum wightii (Brown algae), against different bacterial pathogens.

Collection of Plant Material: Fresh samples were collected by handpicking from the Thirumulla-varam coast of Kollam, Kerala, India. The plant was identified and authenticated by Sr. Tessy Joseph, HOD of Department of Pharmacognosy, Nirmala College of Pharmacy, Muvattupuzha, Kerala, India. The collected Seaweeds were cleaned well with seawater to remove all the extraneous matter, then thoroughly washed with distilled water and subjected to shade drying. The shade dried seaweeds were grounded to a fine powder using a mixer grinder. The powdered samples were then stored in an airtight container for further use.

Preparation of Plant Extract: Powdered samples then subjected to solvent extraction with chloroform and methanol using a continuous soxhlet extraction process. 10 g powder was initially soaked in 50 ml of each solvent, chloroform & methanol in an airtight conical flask for 2 days, and then it was first filtered through a double-layered muslin cloth and then filtered through Whatman no 1 filter paper and the filtrate was collected into a sterile airtight bottle. The extract was then stored at the refrigerator for further studies.

Chemicals and Reagents: All the materials used were of either AR/LR grade or the best possible grades.

Qualitative Analysis of Phytochemical Sub-stance: 3 Phytochemical analysis of both the extracts was carried out to detect the presence of various biomolecules according to the standard qualitative procedures described by Trease and Evans (1989).

Test for Phenols: Ferric Chloride Test: Extracts were treated with 3-4 drops of ferric chloride solution. The formation of bluish-black color indicates the presence of phenol.

Estimation of Phenols: The total phenolic assay was determined by using the Folin-Ciocalteu assay. A known amount of the sample then ground well with 80% ethanol and subjected to centrifugation at 4000 rpm. An aliquot (1 ml) of extract or standard solution of caffic acid is added to 250 ml of the flask containing 9 ml of distilled water.

About 1 ml of folin-ciocalteu phenol reagent was then added to the mixture and shaken well. After some time about 10 ml of 7% sodium bicarbonate was added to the mixture. The solution was diluted to 25 ml with distilled water, mixed, and incubated for 90 min at room temperature. A reagent blank was prepared with double distilled water. The absorbency is determined by 750 nm with a UV spectrophotometer. Total phenolic content was expressed as mg caffic acid equivalents mg/100 gm dry mass.

Estimation of Flavonoids: The total flavonoid content was measured by the Aluminum chloride calorimetric assay. A known amount of the samples was taken; ground well with 80% ethanol and was centrifuged at 4000 rpm. 1 ml of extract or standard solution of catechin (20, 40, 60, 80, & 100 mg/l) was then added to a 10 ml volumetric flask containing 4 ml of double-distilled water. To the flask was added 0.3 ml 5% sodium nitrate, after 5 minutes 0.3 ml 10% aluminium chloride was added.

At the sixth minute, 2 ml of 1M NaOH was added and the total volume was made up to 10 ml with double distilled water. After mixing the solution well, absorbance was measured against the prepared reagent blank at 510 nm. Total flavonoids content was expressed as mg catechin equivalents (CE)/ 100 g dry mass.

Estimation of Tannin: The vanillin method is applied to yield a red-colored adduct measured spectrophotometrically at 500 nm. The tannins content in extracts examined was calculated using a standard curve drawn up for methanol solutions of catechin x 100 g-1 dried weight.

Bacterial Inoculum Preparation: Bacterial inoculum was prepared at first using a loopful of test organisms in 5 ml of Nutrient broth and incubated at 37 ºC for 3-5 h till moderate turbidity was developed. The turbidity was then compared with 0.5 Mc Farland standards and then used for the determination of antibacterial activity.

Agar Plate Diffusion Assay: 4 The antibacterial activity of Sargassum wightii was performed by the agar well diffusion method. Petri plates containing about 20 mL Muller-Hinton’s agar medium was prepared by adding 0.26 g agar broth and 0.312 g agar as a solidifying agent in 20 mL sterilized water and allowed to solidify. Then plates were dried, and 0.1 ml of test organisms were taken from the stock broth and swabbed on agar medium by using sterilized buds.

Then the wells of 6 mm diameter were made on the agar plates by using a cork borer. 25 µl extract and positive control tetracycline each added to the respective wells with the help of a sterilized pipette.

Then the plates were incubated at 37 ºC for 48 h. The antibacterial activity of the test and reference were observed and compared through the zone of inhibition (in mm) on the plates.

From which methanol extract showed the presence of a maximum number of compounds.

TABLE 3: DIAMETER OF ZONE OF INHIBITION (IN MM) PRODUCED BY THE SOLVENT EXTRACTS OF S. WIGHTII AGAINST VARIOUS MICROORGANISMS 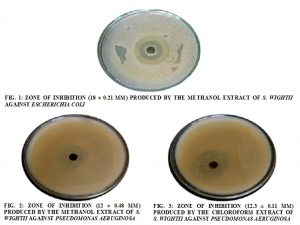 The important phytochemicals viz. Proteins and Amino acids Steroids Glycosides Alkaloids Phenolic compounds Flavonoids Carbohydrates Tannins Saponins Terpenoids and Mucilage was screened for their presence and presented in Table 1.  And the presence of activity might be due to the presence of phytochemicals, alkaloids, phenols, and sugars 7.

Quantitative phytochemical analysis of chloroform & methanolic extracts of S. wightii is presented in Table 2. Flavonoids content was more, and it was found to be 358.50 ± 13.28. Some studies also reveal that flavonoid content could contribute to this effect 8. Phenolic compounds exert a significant effect on antibacterial activity 9. And the results of the quantitative analysis of S. wightii extracts reveals that more zone of inhibition obtained maybe because of the presence of these phytochemicals could inhibit the growth of bacteria more profoundly.

CONCLUSION: The present investigation brings out fruitful results on the phytochemical composition and antibacterial potential of the seaweed extract S. wightii 14. This work reflects the vital role of the presence of phytochemicals in the methanolic extract of S. wightii, its antibacterial activity, and the aptness of the solvent to elicit the required pharmacological action mentioned above. Hence proper researches on this seaweed could be a promising factor for the various pharma contributors in the future for the welfare of mankind 15.