ABSTRACT: Ceropegia bulbosa is a medicinal herb, this is useful in curing many disease like kidney stone and deafness. Ethno botanical study showed that the plant has good medicinal value for tribe of Rajasthan the preliminary phytochemical studies of Ceropegia attenuata tuber and leaf extracts revealed the presence of steroids, glycosides, flavonoids alkaloids, saponins, tannins, terpenoids and potassium salt. Gas chromatography mass spectroscopic investigation of methanolic extract of Ceropegia attenuata – a annual land plant is investigated by GCMS technique while the mass spectra of the compounds found in the extract are matched with the standard library of NIST. GC MS analysis revealed the presence of aromatic hydrocarbons, paraffins, fatty acids, sterol, Oleic acid, ketons and diterpenes etc. Flavone 4'-Oh,5-Oh,7-Di-O-Glucoside (12.09%) with RT=31.78 is present in maximum amount , followed by 9,12,15-Octadecatrienoic acid, methyl ester, (Z,Z,Z)- (7.92%) with RT=16.17 in the methanolic extract of leaves of C.attenuata. Steroids like Ergost-5-en-3-ol-(3.0%), Stigmast-5-Dien-3-Ol, (3.Beta.) (5.26%), Lupeol, Globulol and Phytol   were also detected. Tetratetracontane (5.13%) was also present in considerable amount. The GC-MS analyses revealed that the methanolic extract is mainly composed of organic compound, and steroids. Maximum area are found for 2H-Azepin-2-one, 3-(dimethylamino)hexahydro-(29.30%),with RT=8.97 followed by 1,3-Propanediol, 2-(hydroxymethyl)-2-nitro- (10.56%)with RT=9.54 in the methanolic extract of tuber of C.bulbosa.

INTRODUCTION: The plant species Ceropegia bulbosa known vernacularly as khadula, tilori and patal- tumbi belongs to the family to the Asclepiadoideae (milkweed) sub-family within the family Apocynaceae of the 44 species of Ceropegia found in India, 27 species are endemic to the Peninsular India. 1 which is distributed mainly in Western Ghats and most of them are enlisted under endangered category.2 There is an increasing interest in the phytochemical compounds, which could be relevant to their nutritional incidence and their role in health and disease.3

In the recent years, the interest for the study of the organic compounds from plants and their activity has increased. A lot of extraction methods and analytical methods have been developed for the study of plant active compounds.4 The combination of an ideal separation technique (GC) with the best identification technique (MS) made GC–MS an ideal technique for analysis for volatile and semi-volatile compounds is  more accurate for identification of compounds.

The tuberous roots of many Ceropegia species are edible. 5 and  many others are of medicinal value.6  The root tubers contain starch, sugar, gum, albuminoids, fats and crude fiber and are valuable constituents in many traditional medicinal systems in India. 7 Active principle of tuberous roots contains an alkaloid cero-pegine which is active against diarrhoea and dysentery. 8 There are no previous reports on the phytochemical information of Ceropegia bulbosa by GC-MS.  In this paper we report the chemical composition of the methanolic extracts of Ceropegia bulbosa a tuberous plant of Rajasthan by using GC-MS analysis.

Collection and authentication of the plant material: The whole plant material of Ceropegia attenuata was collected from Jaipur and Ajmer region of Rajasthan state of India, in the month of July -August 2012. Botanical identification and authentication was done by herbarium in charge Department of botany University of Rajasthan Jaipur, where a voucher specimen was deposited with the herbarium file number RUBL21159.

Plant parts: Various mature plant parts (leaves, stem, tuber) of Ceropegia attenuata were collected from Jaipur and Ajmer regions of Rajasthan. These were washed with tap water to remove dust and dried in shade and prepare its powder.

Extract 2g of powdered drug by warming for 2 min. with 20ml 1% sulphuric acid in a 50ml conical flask on a water bath, with intermittent shaking, centrifuge; pipette off the supernatant into a small conical flask. Make an initial test for alkaloids by adding to 0.1ml extract in a semi-micro tube, one drop of Meyer’s reagent. It gives a cream precipitate with alkaloids.

It is prepared by dissolving 1.36g of mercuric chloride in 60 ml distilled water (A) and 5g of potassium iodide in 60ml of distilled water (B). A and B are mixed together and the volume adjusted to 100ml with water.

Test 1. Crush a small sample of the crude drug between the thumb and forefinger, and examine for the presence of an odour.

Extract 1g of the powdered drug by warming with 10ml petroleum sprit (boiling point range 40-60 C.) in a boiling tube heated on a water bath. Do not let the solvent boil dry. Filter the mixture into an evaporating dish and concentrate the filtrate to about 1ml on a water bath. Using a pipette apply one drop of the extract to a filter paper. Expose the paper to a current of warm air and note the occurrence of any translucent area. If this observed, then oils are present.

Place the paper in an oven at 105o C for 15min. and if the translucent spot can still be observed after that time, then a fixed oil is present.

The presence of a volatile oil is detected by the disappearance or diminution of the translucent area.

Prepare an aqueous filtrate of powdered drug, and take a portion of filtrate in a test tube, add 5 ml of dilute ammonia followed by add few drops of concentrated sulphuric acid. A yellow coloration is appears. Upon further standing, the yellow coloration disappears.

Take a small amount of powdered drug in a test tube, add 10 ml ethyl acetate and heat it over a steam bath for 3min. then filter the mixture, take 4 ml of the filtrate with 1ml of dilute ammonia solution. Observe the formation of yellow colouration. It is the indication of flavanoids compounds of drug.

Extract 200 mg of the sample by warming in a test tube with 5ml of dilute (10%) sulphuric acid (Test with pH paper) on a water bath at 100C for 2min. centrifuge or filter, pipette off the supernatant or filtrate.

Neutralize the acid extract with 5% solution of NaOH (Noting the volume of NaOH added). Add 0.1ml of Fehling’s solution ‘A” and then Fehling’s solution ‘B’ until alkaline (Test with pH paper) and heat on the water bath for 2min. Note the quantity of red precipitate formed and compare with that formed in Test 2.

Extract 200mg of the sample using 5ml of water instead of sulphuric acid. After boiling add a volume of water equivalent to the volume of NaOH used in Test 1.

Compare the quantity of precipitate formed in Test 2 with that formed in Test 1.  If the precipitate in Test 1 is greater than that in Test 2, then glycosides may be present, since Test 2 represents the amount of free reducing sugars already present in the crude drug, whereas Test 1 represents free reducing sugars plus those released on acid hydrolysis of any glycosides in the crude drug.

Take 1g of dry powder in 50 ml of water boil for one minute and cool, a thin and cloudy mucilage is produced, which gives thick and more transparent mucilage. To 10 ml of the mucilage add 0.05 ml of 0.01M Iodine, a dark blue colour is produced, which disappears on heating and reappears on cooling.

Take 0.5g of the dried powdered sample in 20ml of water, boil on a water bath and filter it in a test tube. Add few drops of 0.1% ferric chloride and observe for brownish green or a blue-black colouration.

Take five ml of extract, mixed with 2ml of chloroform, and concentrated H2SO4 (3ml) is added to form a layer. A reddish brown coloration on the inner face is formed. It is indicates the presence of terpenoids.

To 2ml of 2% w/v solution, add 2ml of water, 0.1g of sodium bicarbonate and about 20mg of ferrous sulphate, shake and allow stand; a deep violet colour is produced. Add 5ml of 1M sulphuric acid, the colour disappears

GC-MS analysis was carried out on a GC clarus 500 Perkin Elmer system comprising a AOC-20i autosampler and gas chromatograph interfaced to a mass spectrometer (GC-MS) instrument employing the following conditions: column Elite-1 fused silica capillary column (30 x 0.25 mm ID x 1μM df, composed of 100% Dimethyl poly diloxane, operating in electron impact mode at 70eV; helium (99.999%) was used as carrier gas at a constant flow of 1 ml /min and an injection volume of 0.5μl was employed (split ratio of 10:1) injector temperature 250 ºC; ion-source temperature 280 ºC. The oven temperature was programmed from 110ºC (isothermal for 2 min), with an increase of 10ºC/min, to 200ºC, then 5ºC/min to 280ºC, ending with a 9 min isothermal at 280ºC. Mass spectra were taken at 70eV; a scan interval of 0.5 seconds and fragments from 40 to 450 Da. Total GC running time is 45 minutes.

Plant material and extraction: Aerial parts of Ceropegia attenuata were collected during the month of July-august from the forest regions of Jaipur and Ajmer areas. The plant materials (stem and leaves) were air dried at room temperature and under shade, Leaves and tuber were shade dried, powdered and extracted with methanol for 6-8hrs using soxhlet apparatus. The extract was then filtered through muslin, evaporated under reduced pressure and vacuum dried to get the viscous residue.  1μl of the methanolic leaves and tuber extract of Ceropegia attenuata was employed for GC-MS analysis.

Identification of the compound:

The identification of the compounds present in the methanolic extracts were based on the direct comparison of the peaks by retention times and mass spectral data with those for standard compounds, and by computer matching with the online standard library of NIST.

Methanolic extract of the leaf and tuber of Ceropegia attenauta were screened for the presence of steroids, reducing sugar, alkaloids, saponins, tannins, flavonoids, terpenoids, glycosides and vitamins C /ascorbic acid results are presented in Table 1.

GC MS analysis revealed the presence of aromatic hydrocarbons, paraffins,fatty acids, sterol, Oleic acid, ketons and diterpenes etc. Flavone 4'-Oh,5-Oh,7-Di-O-Glucoside (12.09%) is present in maximum amount, followed by 9,12,15-Octadecatrienoic acid, methyl ester, (Z,Z,Z)- (7.92%). in the methanolic extract of leaves of C.attenuata. Steroids like Ergost-5-en-3-ol-(3.0%), Stigmast-5-Dien-3-Ol, (3.Beta.) (5.26%), Lupeol, Globulol and Phytol   were also detected. Tetratetracontane (5.13%) was also present in considerable amount. GC-MS analysis revealed that the minimum presence of Vitamin E and 9-Tricosene, (Z)-. The GC-MS analyses revealed that the methanolic extract is mainly composed of organic compound, and steroids. The gas chromatogram shows the relative concentrations of various compounds getting eluted as a function of retention time. The heights of the peak indicate the relative concentrations of the components present in leaves of C.attenuata. The mass spectrometer analyzes the compounds eluted at different times to identify the nature and structure of the compounds. The large compound fragments into small compounds giving rise to appearance of peaks at different m/z ratios. These mass spectra are fingerprint of that compound which can be identified from the data library. 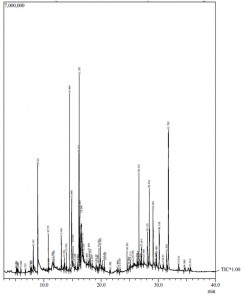 The heights of the peak indicate the relative concentrations of the components present in tuber of C.attenuata. The total alkaloid fraction exhibited promising hepatoprotective, antipyretic, analgesic, local anesthetic, anti-ulcer, and mast-cell stabilizing, tranquilsing and hypotensive activities and was devoid of side effects as noted out by the sub-acute toxicity studies.9. Sekar and Francis 10 reported Ceropegia spp. was used as alternative source for renewable energy due to presence of polyphenol, oil and hydrocarbon, 2Guimarenol and lup-18-en-3beta-ol from C. dichotoma.11. Ceropegia spp has revealed the presence of volatile oil and terpenes, in C. woodii, 41 peaks were isolated, of which 24 compounds were identified. Of the total volatile matter, 70.73% was terpenes, 5.82% was taxanes, and 1.52% was ketones.12 The mass spectrometer analyzes the compounds eluted at different times to identify the nature and structure of the compounds. The GC-MS analyses can identify essential oils in genus Ocimum.13 The large compound fragments into small compounds giving rise to appearance of peaks at different m/z ratios. These mass spectra are fingerprint of that compound which can be identified from the data library.