QUANTIFICATION AND VALIDATION OF AMLODIPINE BESYLATE, OLMESARTAN MEDOXOMIL AND HYDROCHLOROTHIAZIDE BY RP-HPLC IN MARKETED DOSAGE FORM

QUANTIFICATION AND VALIDATION OF AMLODIPINE BESYLATE, OLMESARTAN MEDOXOMIL AND HYDROCHLOROTHIAZIDE BY RP-HPLC IN MARKETED DOSAGE FORM

ABSTRACT: The endeavor of the present work is to develop a simple, economical, efficient, novel green analytical method for the estimation of Amlodipine besylate, Olmesartan medoxomil and Hydrochlorothiazide in pharmaceutical formulation. Quantification was carried out using an Inertsil CN-3.5 μm (4.6 ×250 mm) column, where the mobile phase consisting of 10 mm Phosphate buffer (pH 3.0) and Acetonitrile (40:60). The flow rate was 1.0 mL/min and the effluent was monitored at 262 nm. The observed linearity was in the range of 5-25 µg/ml for Amlodipine (AMLO), Hydrochlorothiazide (HCTZ) and Olmesartan medoxomil (OLME) with a correlation coefficient of 0.997, 0.999 and 0.999 respectively. The proposed method was validated as per ICH guidelines in terms of linearity, accuracy, precision, robustness, and specificity, the limit of detection and limit of quantification. The method has been applied to Amlodipine, Hydrochlorothiazide and Olmesartan formulation without the interference of excipients of the formulation.

Amlodipine Besylate: Amlodipine Besylate (2-[(2-Aminoethoxy) methyl]- 4- (2-chlorophenyl)-1, 4-dihydro-6-methyl-3, 5-pyridinedicarboxylic acid 3-ethyl 5-methyl ester benzene sulfonate). Amlodipine is an L-type calcium channel blocker, which decreases the contraction of action and myosin fibers in the cardiac tissue by decreasing the supply of calcium ions. This results in a significant decrease in blood pressure 1, 4-8. The chemical structure was shown in Fig. 1. 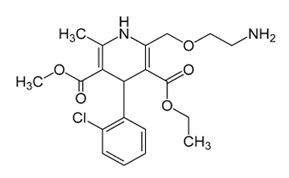 Hydrochlorothiazide: Hydrochlorothiazide (6-chloro- 1, 1- dioxo- 3, 4- dihydro- 2H- 1, 2, 4-benzothiadiazine-7-sulfonamide) is a thiazide-type diuretic, which causes an increased elimination of fluid in the urine, thereby decreasing the blood volume, resulting in a decrease in blood pressure 2, 4-8. The chemical structure was shown in Fig. 2. 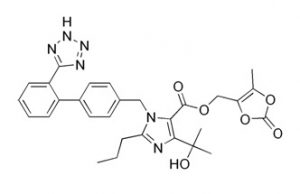 Instrumentation: The HPLC system (Agilent HPLC 1200 Infinity LC Specifications) consisted of a pump (Agilent LC20AT) programmed with Ezchrom Elite Software and rheodyne Injector was used. The detector consisted of a UV/VIS (UV-2489) model that was operated at a wavelength of 262 nm. The column used was Inertsil CN- 3 columns at ambient temperature 11-15.

Preparation of Standard Stock Solution: Accurately weighed Olmesartan Medoxmil (20 mg), Amlodipine (5 Mg) And Hydrochlorothiazide (12.5 mg) were transferred to 100 ml volumetric flask and dissolved and diluted to the mark with methanol. The stock solution further diluted with methanol to obtain a solution of OLME (20 µg/ml), AMLO (5 µg/ml), and HCTZ (12.5 µg/ml), respectively 20-24.

Optimization of HPLC Method: 16-19 The HPLC procedure was optimized with a view to developing a simultaneous assay method for OLME, AMLO and HCTZ respectively.

The mixed standard stock solution (20 µg/ml for OLME and 5 µg/ml for AMLO and 12.5 µg/ml for HCTZ) was injected. For HPLC method optimization of different ratios of methanol and water were tried but it was found that 10 mM Phosphate buffer (pH 3.0): Acetonitrile (40:60) adjusted with OPA gives acceptable retention time (Rt), plates and good resolution for OLME, AMLO, and HCTZ.

Linearity: A series of standard solutions (not less than 5 is recommended) were prepared in the range of 5 μg/ml- 25 μg/ml containing Amlodipine, Hydrochlorothiazide and Olmesartan standards and injected.  A plot of average peak area versus the concentration in μg/ml or mg/ml is made and from this the correlation coefficient, y-intercept (constant of regression) and slope (coefficient of regression) of the regression line were calculated. The calibration data of Amlodipine, Hydrochlorothiazide and Olmesartan is given in Table 3 and the calibration curve is shown in Fig. 4, 5 and 6.

TABLE 3: TABLE OF RESULTS OF LINEARITY OF DETECTOR RESPONSE 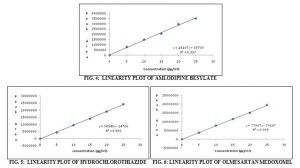 Precision:  The precision of the test procedure was evaluated by injecting the six standard solutions. The relative standard deviation of six injections was calculated. The result of Precision studies is given in Table 4.

Assay: The amounts OLME, AMLO and HCTZ per tablet were calculated by extrapolating the value of area from the calibration curve. The analysis procedure was repeated six times with tablet formulation. The result formulation was reported in Table 6.

TABLE 6: RESULTS OF %ASSAY OF AMLODIPINE, HYDROCHLOROTHIAZIDE AND OLMESARTAN    MEDOXOMIL

CONCLUSION: HPLC method was developed and validated as per ICH guidelines. It can be concluded that the method is specific for the estimation of OLME, AMLO, and HCTZ in the pharmaceutical dosage form. The method has a linear response in a stated range and is accurate and precise.

Statistical analysis proves that the method is suitable for the analysis of OLME, AMLO, and HCTZ as bulk drug and in the pharmaceutical formulation without any interference from the excipients 26-39.

ACKNOWLEDGEMENT: This research was supported by the research lab of Chalapathi institute of pharmaceutical sciences affiliated to Acharya Nagarjuna University which has given an opportunity to prove my research knowledge by providing all the sources I need.

I would like to show my gratitude to Prof. Rama Rao Nadendla, Principal of Chalapathi institute of pharmaceutical sciences and my guide, who is supporting me in all the aspects for my research and sharing his pearls of wisdom during the course of the research, and guiding me in such a way that a research should be. I am very fortunate to have him as my guide, who molded many students as successful researchers.

CONFLICTS OF INTEREST: The authors confirm that this article content has no conflict of interest.

A. Patchala * and R. Nadendla