ABSTRACT: The study presents a simple and rapid chromatographic technique for the estimation of chlorhexidine gluconate for mouth wash using a combination of phosphate buffer and acetonitrile as mobile phase. The separation was carried out on a stainless steel column 250mm × 4.5mm packed with octadecyle silane particles. The detection was carried out using a dual lambda absorbance detector at 254nm wavelength. The method is found to be linear in the concentration range 10.56µg/ml to 98.56µg/ml and correlation coefficient 0.998. The analyte peak was found to be symmetric and the average retention time is 2.919mins. The method was found to selective, precise and accurate for the quantification of the drug from mouth rinse available in the market.

INTRODUCTION: Chlorhexidine (CHX; 1, 1´-hexamethylbis [5-(4-chlorophenyl) biguanide]) has a broad spectrum of antiviral and bactericidal activity. It is a common ingredient in many formulations like skin disinfectants in healthcare products to antiplaque agents in dentistry 1-7. The symmetrical placement of two chlorophenyl guanide groups attached to hexamethylene chain (Fig.1) aids in the rapid absorption of the molecule through the bacterial cell wall, resulting bacterial cell damage, cytoplasmic leakage and enzyme inhibition 8, 9.

CHX is available in the market in various salt forms – diacetate, dihydrochloride or digluconate with variations in solubility.  Among them chlorhexidine gluconate (digluconate salt) has got major application due to its high aqueous solubility. The solution in aqueous medium is stable 10 at a pH range 5.0 to 8.0. At pH above 8.0 it is precipated as an isoluble base and at pH below 4.0 or in acidic conditions it gradually loses its biological activity. On hydrolysis it decomposes 11 to p-chloroaniline at high temperature at higher pH. The diacetate salt is soluble in alcohol, glycerol, polyethylene glycol 12. It is a cationic molecule and in solution it may react with an anionic species resulting the formation of an insoluble precipitate and reduced activity. As a result CHX is incompatible with inorganic ions except in extremely dilute solutions. CHX is also incompatible with organic anions like sodium lauryl sulphate, sodium carboxy methyl cellulose, alginates and many food grade dies recommended for pharmaceutical use. In many cases CHX may be get entrapped within these micelles resulting a reduction in its activity with no visible change of the solution.A quantification technique is essential for the determination of free CHX in its solution.  Several methods have been reported for the quantification of CHX from its formulations and biological fluids. These methods include spectrophotometric 13, chromatographic 14 and gravimetric methods 15. The current study presents a simple, rapid, cost effective liquid chromatographic technique for the quantification of chlorhexidine solutions and oral rinses.

The mobile phase used in this study was prepared 19, 20 by mixing 5.3 mM phosphate buffer solution adjusted to pH 3.5±0.1, with 0.1M orthophosphoric acid solution and acetonitrile in the ratio of 60:40. The mobile phase was degassed and pumped through the column at a flow rate of 1.0 ml/min. The injection volume was 10µl. Concentrations were measured at 254 nm using dual lambda UV-Vis detector at ambient temperature. All data were analysed using Empower-3 software.

61.6 mg of standard chlorhexidine acetate was taken in a 25 ml volumetric flask. It was dissolved in 10 ml mobile phase with the aid of ultrasound and the final volume was made with mobile phase. Five separate dilutions of the stock solution were carried out to obtain solutions in the concentration range 10.56µg/ml to 98.56µg/ml (Table 1). These solutions were injected separately and respective areas were obtained. Finally a concentration verses peak area curve was drawn and was used for quantification purpose.

1 ml of liquid preparation was transferred to a 25 ml volumetric flask. About 10 ml mobile phase was added to it and sonicated for 15 minutes. The volume was made up to the mark with the same solvent. The content of sample solution was filtered through 0.45 µm syringe before each injection.

Assay of the Chlorhexidine gluconate in liquid preparation:

The present method of analysis was conducted to obtain a sensitive and convenient method for estimation of CHX by HPLC from liquid preparation (oral rinse and topical disinfectants). The chromatographic technique was validated as per USP 21 and ICH-Q2 22 guidelines for the parameters like system suitability, linearity, precision, accuracy, ruggedness, robustness, LOD and LOQ.

System suitability of the proposed method was performed by injecting six replicates of standards (33.66μg/ml) and three replicates of sample preparation at a 100% level to verify the accuracy and precisions of the chromatographic system. This method was evaluated by analyzing the repeatability of retention time, tailing factor, theoretical plates of the column and the results were presented in Table 3.

The linearity of the chromatographic method was established by plotting a graph to concentration versus peak area of chlorhexidine acetate standard and determining the correlation coefficient (R2) for the compound. Before injecting the solution, the column was equilibrated for at least 45 mins with the mobile phase. Five concentrations of standard preparation ranging from 10.56μg/ml to 98.56μg/ml were injected into chromatographic system. The detector response was found to be linear in this concentration range of the standard solution with regression co-efficient 0.998. The linearity curve and linearity parameters of CHX were shown in Fig. 3 and in Table 4 respectively. 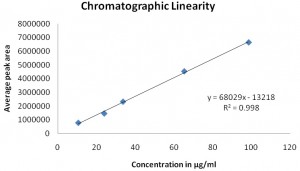 Precision: The precision of the proposed method was determined by intra-day and inter-day studies. Intra-day study was determined by making six repeated injections of the standard solution on the same day, under the same experimental conditions. The inter-day precision of the method was assessed by carrying out the analysis of previous standard solution on three consecutive days in the same laboratory. The relative standard deviation (%RSD) with respect to peak area, peak retention time and the amount were determined for each case in order to assess the precision of the method and presented in Table 5.

Limit of detection and limit of quantification:

The robustness and ruggedness of the HPLC method was evaluated by analyzing the system suitability parameter data after varying individually the pH of the mobile phase (± 0.2), organic solvent content (± 2%) wave length (± 1 nm).

Ruggedness of the proposed method was established by performing analysis of the drug in different instruments by different analysts using similar type of column of different make.

The present work involves estimation of chlorhexidine gluconate using chlorhexidine acetate as standard in pharmaceutical liquid formulation using reverse phase high performance liquid chromatography. The chromatographic separation of CHX was done in stainless steel column C18 (250 × 4.0 i.d, particle size 5 μm). The mobile phase containing of 5.3 mM phosphate buffer (pH = 3.5): acetonitrile in the ratio of 60:40%v/v was found to be more satisfactory as it gave the best resolution of the drug with symmetrical sharp peak. A detection wavelength 254 nm was selected for the evaluation of the λmax obtained by scanning of standard solution. Under the optimized chromatographic condition the retention time for chlorhexidine was found to be 2.919 min (Fig. 2). The system suitability parameters were calculated and were found within limits (Table 3). Linear relationships were obtained between response and amount of drug following the equation y = 6802 x -13218 with high correlation coefficients (R2 = 0.998) in the range of 10.56 μg/ml – 98.56 μg/ml (Table 1, Fig. 3). The precision calculated for the standard solutions during the intra- and inter-day run were given in Table 5.

All the data were within the acceptance criteria. The low %RSD value of intra-day and inter-day precision studies revealed high degree of precision of the proposed method. The results of the formulation analysis and recovery studies were in good agreement with their respective label claim and indicated that there was no interference from the excepients. % Mean recovery and % RSD for the drug were 99.77 and 0.56 respectively (Table 6). LOD and LOQ were found to be 0.09μg/ml and 0.18 μg/ml respectively. The results of robustness and ruggedness study indicated that the method was robust and was unaffected by small deliberate variations in the method parameters and rugged.

CONCLUSION: The proposed RP-HPLC method was evaluated over the accuracy, precision and linearity and proved to be more convenient and effective for quality control and identification of chlorhexidine gluconate in pharmaceutical formulation. The lower solvent consumption along with the short run time allows the analysis of large number of sample in a short period of time. Therefore, this HPLC method can be employed for the estimation of chlorhexidine gluconate in bulk and marketed formulation.