ABSTRACT: The rapid and sensitive UV spectrophotometric method was described for the determination of etodolac, non-steroidal anti-inflammatory drugs. The type of solvent, the range of wavelength and the range of concentration were chosen in order to optimize the conditions. The developed and validated method was successfully applied to the analysis of etodolac without derivatization with any compound in commercial formulations.  The standard calibration curve of etodolac was constructed by plotting absorbance versus concentration in the determined concentration range with the final dilution. The calibration curve was Absorbance in 277 nm wavelength = 0.0303 Concentration in ppm –0.0201 and linear (R³0.9995) in concentration range of 1-50 ppm of etodolac. The LOD and LOQ values of method were 0.7 ppm and 1.0 ppm, respectively. Moreover, the proposed method was fast with respect to analysis time as compared to more sophisticated chromatographic techniques.

INTRODUCTION:Non-steroidal anti-inflammatory drugs (NSAIDs) are a group of drugs of diverse chemical composition and different therapeutic potentials having a minimum of three common features: identical basic pharmacological properties, similar basic mechanism of action as well as similar adverse effects 1. Etodolac [1, 8-Diethyl-1, 3, 4, 9-tetrahydropyrano (3, 4-b)-indole-1-acetic acid] (Figure 1) is a non-steroidal anti-inflammatory drug, that it is used for treatment of postoperative pain and inflammation, for rheumatoid arthritis and osteoarthritis 2. It is rapidly metabolized in the liver, followed by renal elimination as the primary route of excretion 3.

Different analytical techniques including sequential injection analysis 2, voltammetric 4, capillary electrophoretic 5-7, spectrofluorimetric method 8, 9, high-performance thin-layer chromatography 10, 11 and HPLC methods 12-18 used for analysis of etodolac, etodolac enantiomers, and the mechanisms of etodolac degradation in commercial formulations and bulk drug have been described in the literature. The official methods described are a non-aqueous acid-base titration procedure and LC method for determination of etodolac in pure and dosage forms 19-22.

The purpose of this investigation is to develop by considering all optimization parameters with a simple sample preparation without complex creation process and to work the analysis by UV spectrophotometric of etodolac in bulk drug and commercial formulations. So the method was developed by considering all optimization parameters as different from literature.

The validation of method was carried out by establishing linearity, stability, analytical recovery, repeatability, limit of detection (LOD), limit of quantification (LOQ), within-day and between-day precision and accuracy according to International Conference on Harmonization guidelines (ICH) for validation of analytical procedures 29.

Apparatus: Thermospectronic double-beam UV spectrophotometer (HEλIOSβ) with a data processing system was used. The curves of the UV-Visible spectra (N=6. Dl=4.0 nm) of standard and sample solutions were recorded in 1 cm quartz cells at a scan range of 240-310 nm fixed slit width of 2 nm and its data processing system (PC Computer and Hewlett-Packard Deskjet printer) was used.

Preparation of stock and standard solutions: A stock solution (100 ppm) of pure drug was prepared by dissolving 5 mg etodolac in 50 mL of methanol. From this stock solution, the working standard (WS) solutions at 1.0, 2.5, 5, 10, 20, 30 and 50.0 ppm concentrations were prepared by suitable dilution. The quality control (QC) solutions (2.5, 7.5 and 25.0 ppm) were prepared in a similar manner. The QC samples were used to assess the accuracy and precision of the assay method.

Assay of etodolac in tablets: Twenty tablets each of Etol fort tablet and Tadolak tablet were carefully weighed and ground to finely divided powders. Accurate weights equivalent to 400 mg etodolac was dissolved in 100 ml methanol, mixed well. Solution was stand for about 10-15 min and filtered up using 12 mm filter paper. The filtrate was diluted with methanol to obtain a 1.0 ppm and 10 ppm concentrations of etodolac for both tablet samples.

Simulated sample: Simulated samples containing 400 mg of etodolac, 3.3 mg of TiO2 and 3.5 mg Fe2O3 were prepared and analyzed by the proposed method. The samples were homogenized (using a mortar and pestle) and the correspondent weight of one tablet was submitted to the analytical procedure.

Placebo sample: Placebo sample containing 3.3 mg of TiO2 and 3.5 mg Fe2O3 were prepared and analyzed by the proposed method. The samples were homogenized (using a mortar and pestle) and the correspondent weight of one tablet was submitted to the analytical procedure.

Method development: To develop a sensitive UV spectrophotometric method without derivatization of etodolac, the experimental conditions such as the solvent, the wavelength range and smoothing were optimized.

Optimum results were obtained by measuring the wavelength range 24-310 nm through using high smoothing (Δλ = 21.0 nm) for UV spectrophotometric method. In this assay, various solvent systems such as methanol, ethanol and acetonitrile were tried individually or in combinations of different proportions.

The final decision of using methanol was based on sensitivity, interference, suitability for drug, easy preparation of solution, content estimation and cost, respectively.

In UV absorption spectrums of etodolac, one broad shouldered peak with maximum wavelengths at 277 nm in methanol medium was observed as shown in Figure 2. This peak was sharper at higher concentrations. 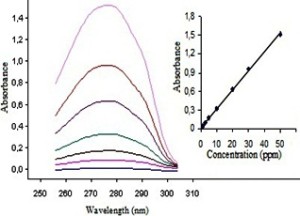 Linearity of calibration curves: In the UV method, the working solutions were scanned at 240-310 nm against a similarly prepared blank. The calibration curve, absorption spectrums of etodolac in bulk drug are shown in Figure 2. The 277 nm wavelength for UV was used for calibration curve. Seven-level calibration series with six analyses at each concentration level were measured.

Sensitivity: Spectrophotometrically, LOD and LOQ were determined by an empirical method that analyzing a series of standard solutions which were containing decreasing amounts of etodolac. The limit of quantification (LOQ) was defined as the lowest concentration of measured value [(RSD< 10%) and accuracy (80-120%)] of standard solutions in calibration curves 29, 30. The limit of detection (LOD), determined (RSD< 20%) as the lowest concentration of analyte which was distinguished from the blank with reasonable confidence was also calculated 29, 30.

Repeatability: Repeatability is given as inter-day and intra-day precision and accuracy where evaluated by analyzing three different concentration (2.5, 7.5 and 25.0 ppm) of etodolac on six different day (between-day) and during the same day one day (within-day) in 277 nm wavelength.

Stability: To determine the stability of solutions of etodolac, the stock solution, WS and QC samples of etodolac were stored in the refrigerator and at room temperature during two week. Then, the stability measurements were carried out. The results were evaluated by comparing these measurements with those of standards and expressed as percentage deviation. It was found to be stable of etodolac solutions for a week in the refrigerator and for four days in room temperature. A significant change in concentration (recovery = 100±1%) were not found under both conditions. In addition to this, stock solution was found to be stable for two week in refrigerator.

Interferences study: The effects of common excipients and additives were tested for their possible interferences in the assay of etodolac. The simulated and placebo samples were prepared and analyzed. It has not been determined any interference of these substances at the levels found in dosage forms. Excipient that was used in this preparation was the most commonly used by the pharmaceutical industry. The presence of TiO2 and Fe2O3 did not appear interfere in the results of the analysis.

DISCUSSION: Etodolac is one of non-steroidal anti-inflammatory drugs (NSAIDs). In the present study, sensitive UV spectrophotometric method is widely employed in analysis of commercial formulations in industry. The proposed method is used so much because it is a method easy to apply.  For this, UV spectrophotometric method that enabled us to quantify the etodolac without derivatization in commercial formulations was developed and validated. In the development of a simple, rapid, sensitive, and accurate analytical method for the routine quantitative determination of samples in laboratories, the unnecessary tedious sample preparations is not request.

Etodolac has UV-absorbing molecule from the specific chromospheres in the structure that absorb at a particular wavelength and this fact was successfully employed for their quantitative determinations using the UV spectrophotometric method. The UV spectrum of etodolac in methanol was shown in Figure 2. The standard calibration curve of etodolac in 277 nm wavelength was constructed by plotting the A(Absorbance for UV) versus etodolac concentrations (Figure 2).

The good linearity of calibration curve within the concentration range of 1-50 ppm was showed for proposed method. The linear regression equation [with standard error of intercept (Sa: 5.0x10-5) and slope (Sb: 4.0x10-4)] and the correlation coefficient, R, was found to be Absorbance = 0.0303 concentration ppm – 0.0201 and 0.9995, respectively.  The correlation coefficient of standard calibration curves for UV of etodolac in methanol medium was higher.The LOQ and LOD values for UV method for pure etodolac sample were found as 1.0 ppm and 0.7 ppm, respectively. The all RSD values were found lower than 10 %.

The proposed method was evaluated in the assay of commercially available tablet containing was claimed to contain 400 mg etodolac/tablet (Etol fort Tablet and Tadolak tablet) with TiO2 and Fe2O3 as excipient. Evaluation was performed using the calibration curve method since no significant difference between the slopes of the calibration curves for standards and commercial formulation solution was observed.

The amount of tablet including 400 mg etodolac was determined of six replicates. The UV spectra obtained from both tablets are shown in Figure 3. It was apparent that the wavelengths of drug solution are same with standard solutions.

The results obtained are satisfactorily accurate and precise as indicated by the excellent % recovery and RSD% <4.5% (Table 3). Experiments showed that there was no interference from the additions and excipients. The determination repeated for six times, final recovery of proposed method for commercial tablets was obtained approximately to be 100.6% and 99.8%. 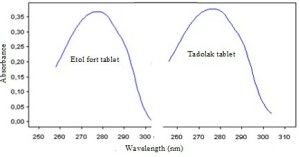 a Mean of six replicate determinations

CONCLUSION: The analytical UV spectrophoto-metric method were developed and completely validated for quantitative determination of etodolac in commercial tablets.  The proposed method provides rapid, simple, accurate and reproducible quantitative analysis for determination of etodolac without derivatization with any compound in commercial formulations, without any interference from the excipients. Moreover, the proposed method was fast with respect to analysis time as compared to more sophisticated chromatographic techniques. The UV spectroscopic method can be conveniently used for the routine determination of etodolac in quality control laboratories, where economy and time are essential.