ABSTRACT: Two simple, accurate, novel, safe and precise methods developed for the simultaneous estimation of poorly water-soluble drugs Levofloxacin and Ornidazole in tablet dosage form using 2M sodium acetate and 8M urea solution (50:50% W/W) as mixed hydrotropic solution. Sodium acetate and urea solution did not show any absorbance above 240 nm and thus no interference in the estimation of drugs were seen. LEVO and OZ follows the Beer’s law in the concentration range of 5-25 µg/ml (r2= 0.9997 and 0.9998). Method-A simultaneous equation method employs 287 and 320 nm as two analytical wavelengths, method-B is absorption ratio method, which uses 301 and 320 nm as two analytical wavelengths were used for estimation of LEVO and OZ. The mean percent label claims of tablet dosage were found to be 98.528±0.431 and 97.916±0.732 in method A, 97.586±0.821 and 98.642±0.293 in method B for LEVO and OZ respectively. The standard deviation, coefficient of variance and standard error were obtained for LEVO and OZ was satisfactorily low. The developed methods were validated according to ICH guidelines and values of accuracy, precision and other statistical analysis were found to be in good accordance with the prescribed values therefore the both methods can be used for routine monitoring of LEVO and OZ in industry in the assay of bulk drug and tablets.

INTRODUCTION:Levofloxacin hemihydrates (LEVO) chemically (-)-(S)-9-fluoro2,3-dihydro-3-methyl-10-(4-methyl-1-piperazinyl)-7-oxo-7H-pyrido[1,2,3-de]-1,4benzoxazine-6-carboxylic acid hemihydrate (Figure 1A.), is a fluoroquinolone antimicrobials, is the active S-isomer isolated from the racemic ofloxacin1-2.

Ornidazole is official in IP 3 and USP 13.The assay procedure mentioned in these pharmacopoeias uses non-aqueous titration for estimation of ornidazole. A literature survey reveals that ornidazole is estimated by glassy carbon electrode 14, UV 15 method,HPLC 16 method, GC 17 method and calorimetry 18 method in solid dosage form and in biological fluids. Some spectrophotometric 19, 20, HPLC 21 and HPTLC 22 methods have been reported for their simultaneous estimation with ofloxacin in the tablet dosage form.

Various techniques have been employed to enhance the aqueous solubility and hydrotrophy is one of them. Maheshwari and Jain et al has used sodium salicylate, sodium benzoate, urea, nicotinamide, sodium citrate and sodium acetate are the most common examples of hydrotropic agents utilized to increase the water solubility of drug 23-34. Various organic solvents such as methanol, chloroform, dimethyl formamide and acetonitrile have been employed for solubilization of poorly water-soluble drugs to carry out spectrophotometric analysis. Drawbacks of organic solvents include their higher cost, toxicity and pollution. Hydrotropic solution may be a proper choice to preclude the use of organic solvents.

Therefore, it was thought worthwhile to employ this mixed hydrotropic solution to extract out the drug from fine powder of tablets to carry out spectrophotometric estimation. There are no reports yet for determination of this combination by proposed methods. Present work emphasizes on the quantitative estimation of LEVO and OZ in their combined dosage form by UV Spectroscopic methods.

FIGURE 1: STRUCTURE OF (A) LEVOFLOXACIN (B) ORNIDAZOLE

Preliminary solubility studies of drugs: Solubility of both drugs was determined at 25±1°C. An excess amount of drug was added to two screw capped 25 ml of volumetric flask containing different aqueous systems viz different combination of hydrotropic agent and 2M sodium acetate and 8M urea solution. The volumetric flasks were shaken mechanically for 12 h at 25±1°C in a mechanical shaker. These solutions were allowed to equilibrate for next 24 h and then centrifuged for 5 min at 2000 rpm.

The supernatant liquid was taken for appropriate dilution after filtered through Whatman filter paper #41 and analyzed spectrophotometrically against corresponding solvent blank. After analysis, it was found that the enhancement in the solubility of LEVO and OZ was found to be more than and 49 and 45 folds respectively in mixture of 2M sodium acetate and 8M urea solution (1:1) as compared to solubility studies in other solvents.

Selection of hydrotropic agent: LEVO and OZ was scanned in hydrotropic agent in the spectrum mode over the UV range (200-400) and mixture of 2 M sodium acetate and 8 M urea (50:50% V/V) solution were found to be most appropriate because: 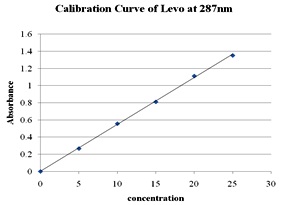 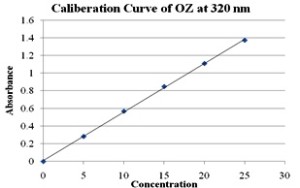 TABLE 1: LINEARITY OF LEVO AND OZ

TABLE 2: OPTICAL CHARACTERISTICS AND LINEARITY DATA OF LEVO AND OZ

Study of Overlay Spectra of drugs and selection of method: The spectra exhibit major absorbance maxima at 287 nm and 320 nm for LEVO and OZ respectively and isobestic point at 301 nm (Figure 2). Due to difference in absorbance maxima and having no interference with each other so both drug can be simultaneously estimated by simultaneous equation method (Method A) and Q-analysis method (Method B)

Analysis of Marketed Formulation: Twenty marketed tablets of LEVO and OZ (Levoflox –OZ, Cipla Limited) were weighed and ground to a fine powder; amount equal to 250 mg of LEVO was taken in 100 ml volumetric flask. The OZ present in this amount of tablet powder was 500 mg. Then 80 ml of sodium acetate and urea solution was added and the flask was sonicated for about 10 min to solubilize the drug present in tablet powder and the volume was made up to the mark with hydrotropic solution. After sonication filtration was done through Whatman filter paper No. 41. Filtrate was collected and further diluted with RO water to get the final concentrations of both drugs in the working range. The absorbances of final dilutions were observed at selected wavelengths and the concentrations were obtained from simultaneous equation method and absorbance ratio method. The statistical evaluation of tablet analysis has reported in Table 4.

Validation Parameters: The developed methods for simultaneous estimation of EPS and HCZ were validated as per ICH guidelines (Linearity, Accuracy, Precision and Robustness) 37. 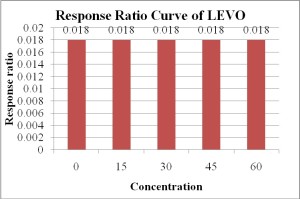 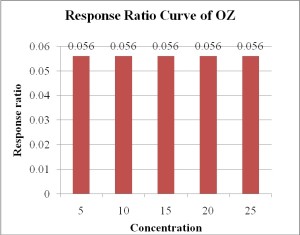 RESULTS AND DISCUSSIONS: Based on the solubility and stability and spectral characteristics of the drugs, 2M sodium acetate and 8M urea solution (50:50% W/W) as mixed hydrotropic solution. It was found that solubility enhanced of LEVO and OZ was more than 49 and 45 fold respectively in mixed hydrotropic solution as compare with distilled water.  LEVO and OZ were show maximum absorbances at 287 and 320 nm respectively. Sodium acetate and urea solution did not show any absorbance above 240 nm and thus no interference in the estimation of drugs were seen. LEVO and OZ follows the Beer’s law in the concentration range of 5-25 µg/ml (r2= 0.9997 and 0.9998).

Method-A simultaneous equation method employs 287 and 320 nm as two analytical wavelengths, method-B is absorption ratio method, which uses 301 and 320 nm as two analytical wavelengths were used for estimation of LEVO and OZ. The optimized methods showed good reproducibility and recovery with ranging from 97.88±0.146 and 98.63±0.861 in method A and 99.77±0.55 and 98.32±0.435 in method B for LEVO and OZ respectively.

CONCLUSION: There was no interference of 2M sodium acetate and 8M urea solution (50:50% W/V) in the estimation and hence the two UV spectrophotometric methods were found to be simple, accurate, economic and rapid for simultaneous estimation of LEVO and OZ in bulk and tablet dosage form. The proposed method can be successfully employed for the routine analysis of LEVO and OZ containing dosage forms.