ABSTRACT: Quantitative structure activity relationship is among the most widely used computational technology for analogue-based drug design. A molecular modelling approach using sulfadiazine- salicylaldehyde Schiff base analogue as anti-mycobacterial activity from recently reported literature were taken and was designed using MOE 2009.10. Sulfanilamide sulfa drugs have been shown to inhibit dihydropteroate synthetase. In order to develop a pharmacophoric model for this inhibition, quantitative structure-activity relationship (QSAR) for sulfa drugs active against DHPS have been studied. Multiple linear regression analysis was performed to derive quantitative structure activity relationship models which were further evaluated internally as well as externally for the prediction of activity. Accurate minimum inhibitory concentrations (µM) were collected for 19 analogs, and other parameters, such as partition coefficients, molar refractivity, dipole moment, electrostatic interactions, lowest unoccupied molecular orbital (LUMO), highest unoccupied molecular orbital (HOMO), topological polar surface area were calculated. A data set of 19 analogs, all having a common sulphadiazine moiety, provided a cross-validated correlation coefficient (r2) value of 0.5998 and root mean square error value of 0.3829. The resulting QSAR pharmacophore model generated from the present study should be useful in the design of a similar group of more potent substituted compounds of Schiff base of sulpha drugs analogues as anti-mycobacterial agents.

The recent statistics reveal that one third of the world’s population is currently infected, and more than 5,000 people die from TB every day.

As per the WHO data for Southeast Asia and Africa, there is an alarming rise in new TB cases. Indeed, with the enormous global burden of TB and the alarming rise in the number of clinical isolates displaying drug resistance. The increasing global TB burden its health and socio-economic impacts, the presence of drug resistance, etc. leads to the search for newer therapeutic agents with divergent and unique structure and with a mechanism of action possibly different from that of existing drugs are urgently required to tackle the menace 2, 3, 4, 5.

An MTB strain is limiting the choice of anti-tubercular antibiotics to toxic, injectable second-line antibiotics. Therefore, there is an interest in search of alternative antibiotics used as anti tubercular agents. Among such antibiotics, sulfonamides are structural analogues of para-aminobenzoic acid (PABA), inhibiting the dihydro-pteroate synthase (DHPS) and blocking the folic acid synthesis pathway of MTB 6. Therefore, the aim of our paper publication is related to build a Quantitative structure - activity relationship (QSAR) models using multiple regression methods for synthesized sulfadiazine- salicylaldehyde Schiff base to explore the substitutional requirement which is essential for the improved anti-mycobacterial activity.

QSAR research has been considered a major tool in drug discovery to explore the ligand- receptor/ enzyme interactions, especially when the structural details of the target are not known. QSAR can aid in identifying functional groups with their various structural parameters used to increase the bioactivity leads designing new structures with the variation in enhanced bioactivity depends on changes in chemical structure 7. QSAR is an effective way for optimizing or correlating the biological activity within a congeneric sequence with certain structural parameters or with functional determinants, such as lipophilicity, polarizability, or electronic and steric properties 2, 8. Once a correlation between structure and activity/ property is found, any number of compounds including those not synthesized, yet can readily be screened for the selection of structures with desired properties 9.

Thus, in this article, we have selected a series of Schiff bases derived from the sulfa drug sulfadiazine with various salicylaldehydes 10. The author of this journal paper done work on Schiff base derived sulfa drug and they were characterized and evaluated against gram-positive and gram-negative bacteria, yeasts, moulds, Mycobacterium tuberculosis, nontuberculous mycobacteria and their cytotoxicity. Some derivatives showed more promising possession for these activities than original compound such as sulfadiazine; hence provide the hopeful hits for further antimicrobial drug development 10.

So, in this work we attempt to establish a quantitative structure-activity relationship between antimycobacterial activities of a series of 19 bioactive molecules derived from sulfadiazine- salicylaldehyde Schiff base was performed by using multiple linear regression analysis. There is no QSAR studies have been conducted out on these analogues so far. Moreover, the principal components analysis and contingency analysis has served to classify the compounds according to their activities and the variability of the descriptors. It allows reducing the number of variables not significant and making the information less redundant. The multiple linear regressions have served to select the descriptors used as the input parameters for the multiples non-linear regression and cross-validation to validate models used with the process leave-one-out (LOO) 11. This study has urged new efforts to find new anti-tubercular drug candidates with novel modes of action, develop pipelines for drug discovery and development and, in particular, try to find new regimens that can considerably shorten the duration of effective therapy which would improve patient compliance and slow down the emergence of drug resistant strains.

MATERIALS AND METHODS: MIC is defined as the lowest concentration of compound that inhibited visible growth. MIC values were manually converted into pMIC (predicted MIC; pMIC = -log MIC). For the development of QSAR models have been considered by using software MOE 2009.10. Biological activity was selected as the dependent variable and remaining molecular descriptors variables were selected as independent variables. The dataset molecules are validated by both internal and external validation procedures.

Dataset: The chemical structures of data set of 19 sulfadiazine- salicylaldehyde Schiff base analogue that already been synthesized and evaluated for their mycobacterium inhibitory activity in-vitro are represented in Fig. 1 10. The micromolar concentration of MIC (µM) was converted to logarithmic values for performing the QSAR study. The Biological data used in this study were a minimum inhibitory concentration of sulfadiazine- salicylaldehyde Schiff base has an activity against MTB Table 1.

QSAR Study: QSAR is an application of combinatorial chemistry to analyze experimental data and build numerical models of the data for prediction and interpretation. QSAR analysis was performed for 19 sulfadiazine- salicylaldehyde Schiff base compounds and their biological activity corresponding to MTB was collected from the reported literature 10 and analysis was done by using the QSAR module by using MOE 2009.10 software 12. The QSAR model was constructed for the above compounds with selected molecular descriptors viz. partition coefficients and molar refractivity, dipole moment, electrostatic interactions, lowest unoccupied molecular orbital (LUMO), highest unoccupied molecular orbital (HOMO) and the topological polar surface area from the QSAR descriptor panel.

The experimentally measured pMIC (µM) for 19 compounds of sulfadiazine- salicylaldehyde Schiff base against MTB were entered manually as activity fields. The regression analysis was performed; the RMSE and R2 values were derived from the QSAR fit. $PRED descriptor is the dependent variable for the activity field pMIC generated by QSAR validate. A QSAR correlation plot was generated by plotting the values of pMIC on the x-axis and the predicted values ($PRED) on the y-axis for all the above compounds. Furthermore, in order to identify active compounds in the data set “QSAR Contingency” application was implemented and followed by principal component analysis (PCA) by plotting a 3D graphical scatter plot with three vector values 13.

RESULTS AND DISCUSSION: In this study, a data set of 19 compounds was subjected to linear free energy regression analysis for model generation. Preliminary analysis was carried out in terms of correlation analysis. The correlations coefficients of different molecular descriptors with anti-mycobacterial activity are presented in Table 2. Some statistically significant QSAR models were chosen for discussion. The derived models in QSAR from multiple linear regression with forwarding stepwise shows a good correlation between biological activity and parameters.

In order to validate the anti-mycobacterial activity, the QSAR model was constructed for these 19 compounds with experimentally derived pMIC (µM) values, system predicted pMIC, $PRED and all other standard molecular descriptors and reported in Table 1 and 2. Furthermore, the regression graph was plotted for pMIC vs. $PRED. Fig. 2. A cross-validated correlation coefficient (r2) value is 0.5998 and root mean square error value is 0.3829. The Z-Score was predicted for all the compounds, wherein a Z-score value of 2.5 and above can be considered to indicate the molecules which are outliers to the fit showed in Table 2. All the compounds showed significant Z-scores except compound 10 had a moderate value of 2.0571 Table 2. The Principal component analysis was carried out using three eigenvalues, viz. PCA1, PCA2 and PCA3, and a 3D graphical plot was created, which included 98% of the variance and presented in Fig. 3. In the plot, all the values were found to lie in the range of 3 to +3 and are shown with different colored spots which correspond to the pMIC of compounds Fig. 3. The result of contingency analysis showed the selected data set for QSAR study was good and all are within the standard limit as suggested. The useful value of C (contingency coefficient) is above 0. 6, V (cramer's V) is above 0.2, U (entropic uncertainty) is above 0.2 and R (linear Correlation) is above 0.2 Table 3. 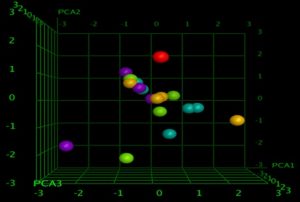 FIG. 3: PRINCIPAL COMPONENT ANALYSIS. Principal Component Analysis (PCA) plot of all these compounds, 3D graphical plot was constructed with three eigenvectors PCA1, PCA2 and PCA3 in the range of 3 to +3 and coordinate value of each compound is represented with a colored spot.

CONCLUSION: A cross-validated correlation coefficient (r2) value is 0.5998 and root mean square error value is 0.3829. Moreover, all the compounds showed significant fitness score ($Z-scores) and lie within the limit. The result of principal component analysis and contingency analysis showed the selected data set for QSAR study was good and all are within the standard limit as suggested in the literature.

The QSAR studies on these compounds have shown that the predicted pMIC values of the compounds have an acceptable correlation with the experimental values from the generated regression, principal component analysis (PCA) plots and the contingency analysis for QSAR.

Quantitative structure activity relationship studies revealed that the anti-mycobacterial activities of these derivatives against the test microorganisms are mainly governed by log P value, dipole moment, HOMO, LUMO, and the molar refractivity, a steric parameter. Thus a proper substitution of the group on aromatic ring probably improves the effectiveness of these derivatives as anti-mycobacterial agents.

In conclusion, QSAR pharmacophore model generated from the present study should be useful in the designing a similar group of more potent substituted compounds of Schiff base of sulpha drugs analogues as anti-mycobacterial agents.

ACKNOWLEDGEMENT: The authors are highly thankful to the Principal and Management of Nandha College of Pharmacy, Erode, Tamil Nadu for providing the necessary facilities to carry out this research.