ABSTRACT: Quinoline and its derivatives are diverse pharmacological agents. They play a vital role in the development of new therapeutic agents. Many new therapeutic agents have been developed by using quinoline nucleus. Hence quinoline and its derivatives constitute an important class of heterocyclic compounds for the new drug development. Quinoline is also known as 1-azanapthalene and many researchers have synthesized large number of quinoline derivatives. Different synthetic routes have been developed by these researchers for the synthesis of quinoline derivatives. These derivatives have also been evaluated for the relevant biological activity by in vitro as well as in vivo methods. The present review focuses on detailed work done so far on the quinoline and its derivatives in the search of new therapeutic agents. The review covers the synthesis as well as biological activities of quinoline derivatives such as antimalarial, anticancer, antibacterial, anthelmintic, antiviral, antiprotozoal, antifungal, anti-inflammatory, analgesic, cardiovascular, reproductive, central nervous system activity, hypoglycemic and miscellaneous activity.

INTRODUCTION: Quinoline  a  nitrogen  containing  heterocyclic  compound  is  known  for  its  diverse  therapeutic potential .  The  derivatives   of quinoline  have  been  synthesized  by  many  routes  in   the  search  of  potent  therapeutic  agents.  Quinoline  has  a  molecular   formula  C9H7N  and  molecular  weight  of  129.16 1.  Quinoline  was  first  extracted  from  coal  tar  in  1934  by  Friedel  Ferdinand  Runge.  Coal tar remains the principal source of commercial quinoline.  Quinolones  are  synthesized  from  simple  anilines  using  a  number  of  named  reactios  for  example combes synthesis, Conrad limpach synthesis, Doebner  reaction, Doebner miller reaction, Gould Jacobs reaction and Skraup synthesis 2.

Moreover  quinoline  also  occurs  in  plants  in  the  form  of  alkaloids  which  is  used  for  the  design of  many  synthetic  compounds  with  diverse  pharmacological  activities.  Many  natural  compounds  with  quinoline  skeleton  are  used  as  medicine  or  as  lead  compound  for  design  and  development  of  novel  and  potent  molecules. For  example  quinine was  isolated  from  the  bark  of  cinchone  trees and  has  been  employed  as  an  antimalarial  agent. Quinoline has also been found to possess antimalarial, anticancer, antibacterial, anticonvulsant, cardiotonic, antifungal, anthelmintic, anti-inflammatory and analgesic activity. 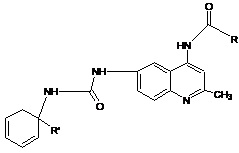 Novel derivatives of 3-cyanoquinolines were developed by Miller et al. in 2009 and evaluated as inhibitors of insulin like growth factors receptors (IGH-1R) for treatment of cancer 23.

A series of novel  quinoline-6-carboxamides and 2-chloroquinoline-4-carboxamides derivatives of quinoline were synthesized by Vijaykumar et al. in 2012 by the reaction of their analogous carboxylic acids with various amine derivatives and evaluated for their antibacterial activity against Escherchia coli and Staphyllococcus aureus 34. 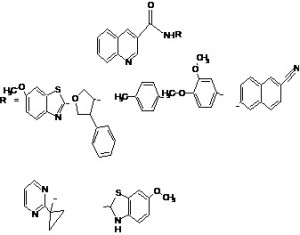 A novel series of substituted 2,4-arylquinolines were developed by Rossiter et al. in 2005 and found to have a good degree of activity against the nematode Haemoncus contortus. These derivatives also showed activity against levamisole, ivermectin and thiabendazole resistant strains of H. contortus 37. 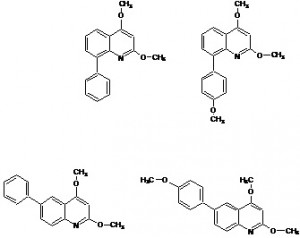 Some secondary amines containing 2-chloroquinoline synthesized by Kumar et al. in 2011 and evaluated to be active as antimycotic agent against Aspergillus niger, As.flavus, Monascus purpureus and Penicillium citrinum. These were non-azole antimycotic agent 50. 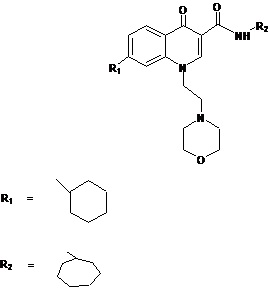 A novel series of biaryletheramide derivatives of quinoline were developed by Bernotas et al. in 2009 and showed activity as agonist of liver X receptor and are useful in conditions of dyslipidaemia. These agents also reverse the conditions of arteriosclerosis 62.

Novel quinolines developed by Bi et al. in 2004 as potent PDE5 inhibitors having utility in the treatment of erectile dysfunction 64.

Quinolines have been found to possess other activities as well.

CONCLUSION: Many researchers have synthesized quinoline and its fused heterocyclic derivatives. These observations have been guiding for the development of new quinoline derivatives that possess varied biological activities i.e. anticancer, antimycobacterial, antimicrobial, anticonvulsant, anti-inflammatory and cardiovascular activities. A lot of work have been done and more to go. Developments of newer quinolines have immense possibilities and scope for drug development scientist. We have presented a concise compilation of this work to aid in present knowledge and to help researchers to explore an interesting quinoline class.

ACKNOWLEDGEMENT: We are grateful to the director, Dr. D.P. Pathak for the valuable discussion and suggestions and to the college authorities of Delhi Pharmaceutical Sciences and Research University (DPSRU) for financial support.