ABSTRACT: Antioxidants play an important role in human health protection. Many researchers and previous studies suggest that antioxidants reduce the risk for chronic diseases like cancer, diabetes, heart disease etc. Primary sources of naturally occurring antioxidants are whole grains, fruits and vegetables. Plant sourced antioxidants like Vitamin C, Vitamin E, carotenes, phenolic acids etc, have been recognized as having the potential to reduce disease risk. Most of the antioxidant compounds in a typical diet are derived from plant sources and belong to various classes of compounds with a wide variety of physical and chemical properties. 2, 2-Diphenyl-1- picrylhydrazyl (DPPH) radicals are widely used in model systems to investigate the scavenging activity of several natural phytocompounds. DPPH assay is a rapid, simple and inexpensive method to measure antioxidant capacity of plant extracts or food. It involves the use of the free radical, DPPH which is widely used to test the ability of compounds to act as free radical scavengers or hydrogen donors and to evaluate antioxidant activity. When a solution of DPPH is mixed with that of a substance that can donate a hydrogen atom, then this gives rise to the reduced form (Dipheny-l-picrylhydrazine; non radical) with the loss of violet color. The present antioxidant work carried out on three organic solvents (methanol, chloroform and aqueous) using Acalypha indica Linn. (Euphorbeace family) plant extract with five different concentrations like 10, 20, 30, 40 and 50 µg/ml. Among these, methanolic plant extract shows highest inhibition. BHA (Butylated hydroxyanisole(µg/ml))has been used as standard reference.

INTRODUCTION: Acalypha indica Linn. is a small annual shrub, which generally occurs as a troublesome weed in gardens, forest areas, home premises, roadsides and throughout the plains of India. It is observed in tropical Africa and Polynesia 1. It is also used for healing wounds 2 as a laxative 3 as an anti-snake venom 4, 5, 6 and for its anti-inflamation 7. It is used in traditional medicine for the treatment of rheumatoid arthritis 8 syphilitic ulcer and scabies 9.

Present work reports the chemical constituents and biological activities of the methanolic extract of A. indica. There is no previously published research on the antioxidant properties, of the aerial parts from this plant. Antioxidants which are immensely present in aerial parts of Acalypha indica Linn. work by significantly preventing caused by free radicals such as superoxide radical (O2.), Hydroxyl radical (OH) and non-free radical species such as H2O2 and singlet oxygen (1O2) is associated with cellular and metabolic injury, cancer, accelerated aging, cardio-vascular diseases, neurodegenerative diseases and Inflammation 10, 11.

Most of the time, the levels of free radicals in living organisms are controlled by a complex set of antioxidant defences, which minimize oxidative damage to important bio molecules, but under oxidative stress, endogenous antioxidants are not enough to deal with the increased levels of ROS 15, 16. This free radical, stable at room temperature, is reduced in the presence of an antioxidant molecule, giving rise to colourless ethanol solution. The use of the DPPH assay provides an effortless way to evaluate antioxidants by spectrophotometry) so it can be a useful method to assess various products at a time.

Therefore the objectives of the present study involves the free radical scavenging activity of aerial parts of Acalypa indica Linn. plant extract and also to determine the level of antioxidant activity by using statistical analysis.

Collection and Processing of Plant Parts: Fresh leaves stem and root parts of the Acalypa indica Linn. plant were collected during December - 2016 from CIMAP (Central Institute of Medicinal and Aromatic Plants) Boduppal, Hyderabad. These were then planted and maintained at Genetics experimental farm, Department of Genetics, Osmania University, Hyderabad.

Preparation of Plant Extracts: To know the medicinal importance, the shade dried plant parts of the study species were made into a fine powder of 40 mesh size using the pulverizer separately. Following that, 50 gm of the powder was filled in the filter paper and successively extracted using 250 ml solvents viz. Aqueous, Methanol, Chloroform, separately using the soxhlet extractor for 24 - 28 hours (Gafner et al., 1985). Then the extracts were filtered separately through Whatman No.1 filter paper to remove all undissolved matter, including cellular materials and other constituents that are insoluble in the extraction solvents.

DPPH Free Radical Scavenging Activity: The free radical scavenging activity of the whole Acalypa indica Linn. methanolic plant extract (leaf, stem and root ) and a standard reference compound was analyzed by the DPPH assay as described by Sanchez-Moreno et al.,(1998) and Arokyaraj et al.,(2008) with modification. This method is based on the reduction of DPPH in methanol solution in the presence of hydrogen donating antioxidant due to the formation of non radical from DPPH- H.

The mixture was thoroughly mixed and incubated for 30 min. The optical density of the solution was then measured at 517 nm using Hitachi 2010 spectrophotometer. BHA (µg/ml) has been used as standard reference. The DPPH radical scavenging activity was calculated from the absorption according to the following equation: 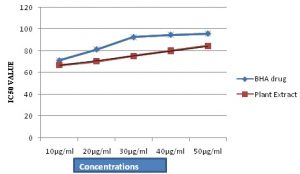 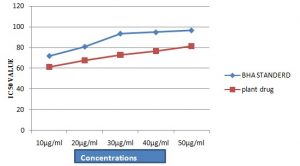 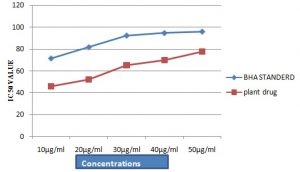