A simple and sensitive liquid chromatography–tandem mass spectrometry method was developed and validated for estimation of Labetalol in human plasma, an adrenergic β-receptor blocking agent used in the treatment of hypertension, which exhibits both α- and β-adrenoreceptor blocking activity. The analyte and internal standard (Metoprolol) were extracted by liquid/liquid extraction with ethyl acetate. The chromatographic separation was performed on reverse phase Phenomenax Luna column (C18, 5µm, 100 x 4.6 mm)  with a mobile phase of 2 mM ammonium formate (pH 5.0) / methanol (20:80 v/v), which was pumped at a flow rate of 0.5 mL / min with split ratio of 20:80. The protonated analyte was quantitated in positive ionization by multiple reactions monitoring with a mass spectrometer. The mass transitions m/z 329.01→161.95 and 267.99→115.86 were used to measure Labetalol and Metoprolol, respectively. The lower limit of quantitation was 3.1800 ng/mL with a relative standard deviation of less than 15%. Acceptable precision and accuracy were obtained for concentrations over the calibration curve ranges (3.1800 to 700.8760 ng/ml). Sample analysis time of 2.5 min for each sample made it possible to analyze a throughput of more than 400 human plasma samples per day.

INTRODUCTION: Labetalol hydrochloride, 2-hydroxy- 5- [1- hydroxy- 2- (1- methyl - 3 phenyl propylamino) ethyl] benzamide hydrochloride, is an adrenergic β-receptor blocking agent used in the treatment of hypertension, which exhibits both α- and β-adrenoceptor blocking activity 1, 2, and because of its use as doping agent in sports, this drug has been added to the list of forbidden substances issued by the International Olympic Committee. Therefore, the development of an analytical method sensitive and selective enough for determining Labetalol in both pharmaceutical and biological samples is of great importance.

In many cases, highly specific mass spectrometric detection, especially using tandem mass spectrometry (MS–MS) just requires minimum separation on column. This will greatly shorten the assay time and make it possible to analyze large quantities of samples within a tight time frame. To date no LC–MS/MS method has been reported for quantitation of Labetalol in human plasma. In contrast, we report an LC–MS/MS method with an excellent sensitivity for 20µL injection volume corresponding to 3.1800 ng/mL on-column with a total run time of 2.5 min. This paper describes the development and validation of a highly sensitive LC–MS/MS method for the quantitation of Labetalol in human plasma. 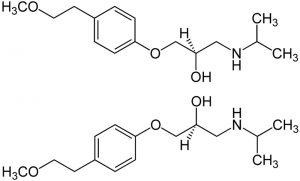 FIG. 1: CHEMICAL STRUCTURES OF (A) LABETALOL, (B) METOPROLOL (IS)

Chromatography: The system (Waters, Milford, USA) was equipped with an Acquity SM sample manager, Acquity BSM binary solvent manager and thermostated column compartment. The chromatography was performed on a Phenomenax Luna column (C18, 5µm, 100 x 4.6 mm) at a temperature of 40°C. The isocratic mobile phase composition was a mixture of 2 mM ammonium formate (pH 5.0) / methanol (20:80 v/v), which was pumped at a flow rate of 0.5 mL / min with split ratio of 20:80 (in: out).

Sample processing: A 250 μL volume of plasma was transferred to a 4 mL ria vial, and then 50 μL of IS working solution (2 μg/mL) was spiked. After vortexing for 30 sec, add 100 μL of 0.025 M disodium hydrogen phosphate solution in ria vial. Then 2.5-mL aliquot of the extraction solvent ethyl acetate was added using handistep (Brand Eppendorf, Germany). The sample was vortex-mixed for 10 min using a Multi-Pulse Vortexer (Heidolph, Germany). The sample was then Centrifuge at rcf 1891 + 100 for 5 min at 10°C using Multifuge 3S-R (Kendro Lab, heraeus, Germany) . The organic layer (2.0 mL) was quantitatively transferred to a 4 mL glass tube and evaporated to dryness at 40°C under a stream of nitrogen. Then, the dried extract was reconstituted in 250 μL of Mobile phase and a 20-μL aliquot was injected into the chromatographic system.

Calibration and Quality control samples: Standard stock solution of Labetalol (1 mg/mL) was prepared in methanol and Metoprolol (1 mg/mL), internal standard was separately prepared in methanol. Spiking solutions for calibrations curve and quality controls were prepared by appropriate dilution in methanol: water (50:50). The IS working solution (2 µg/mL) was prepared by diluting its stock solution with methanol: water (50:50). Spiking solutions (0.2 mL) were added to drug-free human plasma     (9.8 mL) as a bulk, to obtain Labetalol spiking concentration levels of 3.1800 to 700.8760 ng/mL.

The quality control pools were divided into aliquots in micro centrifuge tubes (Tarson, 2 mL) and stored in the freezer at −70°C until analysis. Each validation run consisted of a double quality control, system suitability sample, blank samples (a plasma sample processed without an IS), a zero sample (a plasma processed with IS), calibration curve consisting of eight non-zero samples covering the total range (3.1800 to 700.8760 ng/mL) and QC samples at three concentrations (n = 6, at each concentration). Such validation runs were generated on 3 consecutive days. Calibration samples were analyzed from low to high at the beginning of each validation run and other samples were distributed randomly through the run. Linearity was assessed by a weighted (1/x2) least squares regression analysis. The calibration curve had a correlation coefficient (r2) of 0.99. The acceptance criterion for each back-calculated standard concentration was 15% deviation from the nominal value except LLOQ.

Specificity: Randomly selected six blank human plasma samples (K3EDTA anticoagulant) , which were collected under controlled conditions, were carried through the extraction procedure and chromatographed to determine the extent to which endogenous plasma components may contribute to interfere with the analyte or the internal standard. The results were compared with LLOQ (3.1800 ng/mL).

Accuracy and precision: Within-batch accuracy and precision evaluations were performed by repeated analysis of Labetalol in human plasma. The run consisted of a calibration curve with six replicates of each LLOQ, low, medium and high quality control samples. Between-batch accuracy and precision were assessed by analysis of samples consisting of a calibration curve and six replicates of LLOQ, low, medium and high quality control samples for Labetalol on three separate occasions. During routine analysis, each analytical run included a set of calibration samples, a set of QC samples in duplicate and plasma samples to be determined. The overall precision of the method expressed as relative standard deviation and accuracy of the method.

Stability: 24 h stability was examined by keeping replicates of the low and high plasma quality control samples at room temperature for approximately 24 h. Freeze–thaw stability of the samples was obtained over four freeze-thaw cycles, by thawing at room temperature for 2–3 h and refrozen for 12–24 h for each cycle. Autosampler stability of Labetalol was tested by analysis of processed and reconstituted low and high plasma QC samples, which are stored in the autosampler tray for 40 h. Stability of Labetalol in human plasma was tested after storage at approximately −70oC for 60 days. For each concentration and each storage condition, six replicates were analyzed in one analytical batch. The concentration of Labetalol after each storage period was related to the initial concentration as determined for the samples that were freshly prepared and processed immediately.

Mass spectrometry: Electrospray MS-MS was used to analyze Labetalol, as it is beneficial in developing a selective and sensitive method. [M+H]+ was the predominant ion in the Q1 spectrum and was used as the precursor ion to obtain product ion spectra. The most sensitive mass transition was from m/z 329.01 to 161.95 for Labetalol and from m/z 4267.99 to 115.86 for the IS. LC-MRM is a very powerful technique for pharmacokinetic studies since it provides sensitivity, selectivity and specificity requirements for analytical methods. Thus, the MRM technique was chosen for the assay development. The MRM state file parameters were optimized to maximize the response for the analyte. The parameters presented in Table 1 are the result of this optimization.

Method development: The chromatographic conditions, especially the composition of mobile phase, were optimized through several trials to achieve good resolution and symmetric peak shapes for the analyte and IS, as well as a short run time. It was found that a mixture of 2 mM ammonium formate (pH 5.0) /methanol (20:80, v/v) could achieve this purpose and was finally adopted as the mobile phase. The high proportion of organic solvent eluted the Labetalol and Metoprolol (IS) at retention times of 1.20 and 1.20 min, respectively. A flow rate of 0.5 mL/min produced good peak shapes and permitted a run time of 2.5 min.

Liquid-liquid extraction (LLE) was used for the sample preparation in this work. LLE can be helpful in producing a spectroscopically clean sample and avoiding the introduction of nonvolatile materials onto the column and MS system. Clean samples are essential for minimizing ion suppression and matrix effect in LC/MS/MS analyses. Ethyl acetate was found to be optimal, which can produce a clean chromatogram for a blank plasma sample. The average recoveries of Labetalol from spiked plasma samples at low, medium and high level are 77.5%, 76.8% and 79.2 respectively and for Metoprolol (ISTD) is 84.8% concentration used in the method. Recoveries of the analytes and IS were good and it was consistent, precise and reproducible. Therefore, the method has proved to be robust in high-throughput bioanalysis. Choosing the appropriate Internal Standard is an important aspect to achieve acceptable method performance, especially with LC/MS/MS, where matrix effects can lead to poor analytical results. Several compounds were investigated to find a suitable IS, and finally Metoprolol was found to be suitable for the present purpose. In addition, its retention behavior is similar to that of the target analyte. Clean chromatograms were obtained and no significant direct interferences in the MRM channels at the relevant retention times were observed. However, in ESI, signal suppression or enhancement may occur due to co-eluting endogenous components of the sample matrix.

The potential for co-extracted matrix component to influence the detector response of analyte and IS was evaluated in six independent lots of blank K3EDTA human plasma, and one lot of haemolysed plasma. Aqueous standard equivalent to LQC level concentration along with intended concentration of internal standard was spiked to the post extracted blank matrix. Matrix factor and matrix effect were calculated as;

Specificity: There were no interfering peaks present in six different randomly selected samples of drug free human plasma used for analysis at the retention times of either analyte or IS There was no interference of Labetalol and IS analysis by other potentially co-administered drugs such as paracetamol, ibuprofen, aspirin, ampicillin, amoxicillin.

Accuracy of the assay: The accuracy values for between- and within-batch studies at the LLOQ and at low, medium and high concentrations of Labetalol in plasma were within acceptable limits (n=6) (Table 3).

Within-batch variability of the assay: The results shown in Table 4 indicate that the assay method is reproducible for replicate analysis of Labetalol in human plasma within the same day.

Between-batch variability of the assay: The results shown in Table 4 indicate that the assay method is reproducible on different days.

Stability: Stock solutions of Labetalol (1 mg/mL) and IS (1 mg/mL) were prepared separately in methanol. The weight of analytes was corrected for purity. The solutions were stable for at least 1 month when stored at 4oC. The stability experiments were aimed at testing all possible conditions that the samples might experience after collecting and prior the analysis. These were performed as described above. All stability results are summarized in Table 5. Three freeze–thaw cycles and 24 h room temperature storage for low and high quality controls samples indicated that Labetalol was stable in human plasma under these conditions. QC samples were stable for at least 60 days if stored frozen at approximately −70 ◦C. Testing of autosampler stability of quality control samples (Table 5) indicated that Labetalol is stable when kept in the autosampler for up to 40 h. 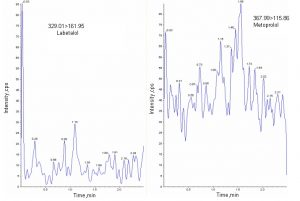 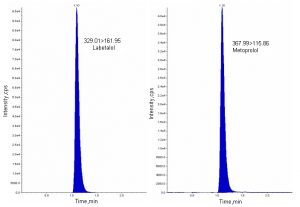 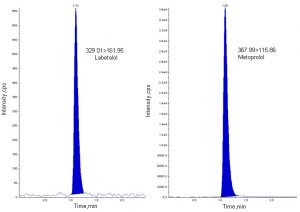 TABLE 3: PRECISION AND ACCURACY OF THE METHOD FOR DETERMINING LABETALOL CONCENCENTRATIONS IN HUMAN PLASMA

TABLE 4: PRECISION AND ACCURACY DATA OF BACK-CALCULATED CONCENTRATIONS OF CALIBRATION SAMPLES FOR LABETALOL IN HUMAN PLASMA

Many variables related to the electrospray reproducibility were optimized for both precision and sensitivity to obtain these results. The method described is simple, rapid, sensitive, specific and fully validated as per FDA guidelines. The simplicity of the method, and using rapid liquid-liquid extraction and sample turnover rate of 2.5 min per sample, make it an attractive procedure in high-throughput bioanalysis of Labetalol. The validated method allows quantification of Labetalol in the 3.1800 to 700.8760 ng/mL range.