Categories Menu
Home » RAPID, SENSITIVE METHOD FOR THE DETERMINATION OF CINNARIZINE IN PLASMA BY LC-MS/MS AND IT’S APPLICATION TO PHARMACOKINETIC STUDY

RAPID, SENSITIVE METHOD FOR THE DETERMINATION OF CINNARIZINE IN PLASMA BY LC-MS/MS AND IT’S APPLICATION TO PHARMACOKINETIC STUDY

RAPID, SENSITIVE METHOD FOR THE DETERMINATION OF CINNARIZINE IN PLASMA BY LC-MS/MS AND IT’S APPLICATION TO PHARMACOKINETIC STUDY

ABSTRACT: Bioavailability of orally administered cinnarizine is typically low and variable due to high incidence of degradation. Many methods are available in public domain for the determination of Cinnarizine in plasma by RP-LC method but none published a LC-MS/MS method. Our objective is to develop a simple, rapid, sensitive bioanalytical method for the determination of Cinnarizine in human plasma by LC-MS/MS. Method has been developed for the Calibration curve range 0.4 to 100 ng/mL in plasma using LC-ESI-MRM detection on API 4000 coupled with SIL-HTC. Chromatography separation was achieved on Hypurity C18 column using Methanol: 5 mM Ammonium Acetate (pH 4.5) buffer in the ratio 95:5. Sample extraction was performed with methyl tertiary butyl ether and the detection was performed for MRM 369.250/ 167.150 along with labeled internal standard Cinnarizine D8. Method validation was performed for selectivity, matrix effect, recovery, precision, accuracy, ruggedness, haemolysis and lipemic effect and stabilities in aqueous as well as in plasma, all validation parameters found well within acceptance limits. Then the method is successfully applied to analyze subject samples a bioequivalence study to compare test with innovator formulation. Incurred sample reanalysis revealed that the method is reproducible and accurate.

INTRODUCTION: Cinnarizine was first synthesized by Janssen Pharmaceutica in 1955. The nonproprietary name is derived from the cinnamyl substituent on one of the nitrogen atoms, combined with the generic ending "-rizine" for "anti-histaminics/cerebral (or peripheral) vasodilators. Bioavailability of orally administered cinnarizine is typically low and variable due to high incidence of degradation.

However, it has been found than when administered intravenously in lipid emulsion, better

pharmacokinetics and tissue distribution were achieved. After administration, cinnarizine is completely metabolized within the body and the metabolites are eliminated by one third in the urine and two thirds in solid waste 1.

Cinnarizine is chemically known as 1-(Diphenyl methyl)-4-(3-phenyl-2-propenyl)  piperazine with 368.225 g/mol molecular weight, is a lipophilic weak base 2, it has with only two tertiary amine functional groups with mid polar in nature. Amine groups will give advantage during liquid liquid extraction for good recovery under normal or basic conditions but fragmentation is the problem, both optimization of mass parameters and extraction are critical to make the method selective from endogenous and exogenous interferences, for example chorine adducts of some additive will result of close to Cinnarizine parent ion, so the method must be selective from interferences. 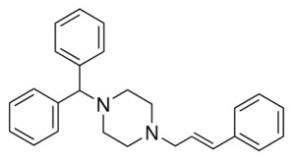 Cinnarizine is a old molecule however only one mass detection method was reported in public domain more over it is a simultaneous Tandam MS detection method by Na Liu et al., this method is not rapid, required polarity switch and CC range 1 to 30 ng/ml is not sufficient enough for lower dosage and it has precipitation for sample extraction which then gives more matrix effects and interferences 3. Hanna Nowacka-Krukowska et al., reported HPLC method 4, UV detection always got many disadvantages compared to mass detection, involves long run time and lengthy sample processing steps.

Few reported methods utilized Cinnarizine as Internal standard for their analytes 5, 6. Few other methods are reported for the determination in dosage forms 7, 8, 9.

METHODS: CC and QC Stock solutions of Cinnarizine were prepared in methonol followed by stock dilutions with 60% methanol in water as diluent. CC and QC were then bulk spiked into screened blank plasma (K2EDTA as an anticoagulant), aliquots were made and stored in deep freezers maintained at -70 0C. Eight point calibration curve over the range 0.4 to 100 ng/mL was prepared along with four levels of QC’s named LLOQQC, LQC, MQC and HQC.

Method Development: Stock solution was prepared in methonol then the further dilutions were made in 60% methanol in water solution, 100ng/ml working solution was then prepared for tunning fo instrument mass parameters except source parameters which are then optimized thru flow injection analysis technique under finalized mobile phase conditions. Mass parameters were tunned for Q1 and then Q3 in positive mode, no or very low signal was found in negative mass as there are no functional groups to ionize in negative mode hence positive mode was finalized as it is showing good intensity and consistency because of the tertiary amine functional group.

Deuterium labeled Cinnarizine is selected as internal standard (Cinnarizine D8) since labeled standard will compensate analytical error and give great producibility. C18 column was selected as the molecule is mid polar in nature. Mobile phase is selected in such way that 1) the retention time must be after void volume of column 2) ionization must be high and reproducible. Lot of work has done to set the chromatographic parameters such as temperatures and source parameters to get symmetric and sharp peak to avoid usage of high number of smooths as it is a concern to regulators.

Tertiary methyl butyl ether is selected as extraction solvent keep in mind the molecule nature and without any buffer addition, basic buffer addition may give more recovery than neutral conditions for this molecule but when the recovery between buffered Vs unbuffered is more or less same then buffer addition may not give upper hand but may give chance to introduce analytical error thru this step addition hence no buffer was added. Recovery was optimized carefully for precise and reproducible over the Calibration curve range.

Matrix effect was nullified by using labeled internal standard. Cinnarizine D8 standard is tested for any unlabeled compound and found no significant interference at analyte retention time from labeled standard so internal standard concentration is set around the response fo CC standard 5 to 6. This is to ensure that the proper fit for linear curve.

Method Validation: Signal to noise ratio was tested for Cinnarizine lower limit of quantitation signal using 6 different individual donor plasma lots vs blank signal in the run, signal to noise ratio always found more than 7. LOD is tested at 0.1 found signal but not found reproducible because of the interferences. Hence 0.4 is set as LLOQ.  Selectivity and selectivity in presence of concomitant drugs were evaluated using 10 different donor plasma lots (6 normal + 2 hemolytic + 2 lipemic) for interferences at analyte as well as internal standard retention times, blank, blank+IS, LLOQ were analyzed and found interferences are within acceptance limits in blank samples when compared to LLOQ signal as stated in the EMA guideline ‘Guideline on Bioanalytical method validation’. Blank and LLOQ chromatograms are presented under Fig. 2 - 5.

Matrix effect was tested for all 10 selected plasma lots, post extracted blank spiked at LQC and HQC from each lot were compared against pure aqueous samples at the same level. Internal standard matrix factor was found within 0.98 to 1.03 which is almost near to 1, this matrix factor means method has neither suppression nor enhancement. Absolute Recovery of the method was conducted at LQC, MQC and HQC, 6 sets at each level were extracted and analyzed along with pure aqueous samples, recovery at each level and then global recovery was calculated for analyte and internal standard, recovery found near 50% with % CV less than 15%. Linearity, precision and accuracy was tested inter and intraday by analyzing 4 precision and accuracy batches that are analyzed by different analysts using different columns on different days, each precision and accuracy batch consists of calibration curve and 6 sets of LLOQQC, LQC, MQC and HQC. Linearity, precision and accuracy found within acceptance limits. Calibration curve graph is presented under Fig 6.

Application of the Method: Validated method has been applied to analyze samples collected after administration of Cinnarizine 25 mg tablets of test and reference formulations. Study was conducted as per IEC approved protocol, volunteers recruited into study on the successful completion of screening activities along with inclusion and exclusion criteria specified in the study protocol. Single dose of Cinnarizine 25 mg tablet administered to volunteers after at least 10 hours fasting in a cross over study. Blood samples were collected at various times as per the Tmax and t half of Cinnarizine, plasma separated and stored at deep freezers for analysis. 1197 unknown samples have collected from 32 subjects in a two period crossover study. All samples were analyzed, repeat analysis conducted for analytical reasons then at the end of analysis, incurred sample reanalysis was conducted for 10% of unknown samples, 97.5% samples are met the acceptance when compared to original assay values. Non compartmental pharmacokinetic and statistical analysis was performed by statistician, test formulation found bioequivalent to reference formulation at 90% confidence.

CONCLUSION: A simple, rapid, sensitive method for the determination of Cinnarizine in human plasma was developed, validated and successfully applied to quantify unknown samples of Bioequivalence study. Separation was achieved on C18 column whereas extraction was done using tertiary methyl butyl ether. Detection and Quantitation was performed using positive MRM on ESI turbo sourced API4000. Signal to noise ratio found more than the recommended always, selectivity revealed that method has no interferences from either endogenous or exogenous compounds, method found selective, recovery found consistent and reproducible, linearity, precision and accuracy found well for the Calibration range 0.4 to 100 ng/ml. Cinnarizine and IS found stable in any given condition. ISR revealed that the method is reliable, reproducible, accurate, method is also rapid to analyze approx 200 unknown samples per day per instrument.

ACKNOWLEDGEMENT: This work was conducted at bioanalytical department of VerGo Clinicals and was supported by VerGo management.