ABSTRACT: Ras proteins in association with GTP and GDP act as a bio-molecular switch for signaling cell growth, cell survival and signal transduction. The presence of mutated Ras proteins is found to vary in different cancer types and the highest occurrence of about 90% is observed in pancreatic cancer.  The Ras GTPase binding site is mainly involved in signal cell proliferation. Hence, this binding site has been considered as a major target. At the same time, targeting a specific protein and designing the drug molecule with respect to that is practically of no use as the target proteins are fast mutating. In this scenario, designing the template from the hot spot of proteins and fitting the template for all the target protein molecules seem to be a promising technique. The templates are initially screened on the basis of pharmacokinetic and pharmacodynamic requirements. Six templates are found to be satisfying conditions like IC50, lipophilic efficiency, ligand efficiency etc. and their efficiencies are compared with standard reference molecules. The computed enrichment factors support these templates to be leads for effective anti-cancer drugs subject to further in vitro and in vivo evaluation.

INTRODUCTION:Ras proteins are prototypical G- proteins keeping a major role in signaling cell growth, cell survival and signal transduction 1. Ras is a regulatory GTP hydrolase which gets activated by binding with GTP (guanosinetriphosphate) and deactivated by binding with GDP (guanosine di phosphate). In this GTP bound active state, the signal transduction from growth factor receptors to downstream effectors results in activation of the proteins 2, 3.

Ras is found to be fast mutated. In all major types of cancers, the presence of mutated Ras has been identified in different percentages 4. Ras functions as a ‘bio-molecular switch’ for signaling cell growth. In normal cells, Ras GTP association results in activating cell growth (on state) while RasGDP association makes the process inactive (off state) 5. It has been observed that the mutated Ras seldom releases itself from the association with GTP, which results in the permanent RasGTP active interactions ultimately causing an uncontrolled cell growth 6. Hence, Ras GTP has been taken as a major target for designing anti-cancer drugs. Due to the high mutability of the binding site, the designed molecules are found to be highly specific, resulting in response to only a small fraction of patients.

However, in the designed templates, proper screening with pharmacokinetic and pharmacodynamic requirements improves the situation to some extent 7. A proper optimization of the pharmacophoric points within the hot spots of the target molecules provides a wide acceptability. In the present work, new templates have been identified as GTPase inhibitors, with favorable properties. The computation of enrichment factor of properties like IC50, lipophilic efficiency etc. with respect to two standard drug molecules supports the above fact.

MATERIALS AND METHODS: The Ras GTPase complexes have been identified from the RCSB repository and are further purified by removing the water molecules, conformers and unnecessary ligands. By looking at the natural ligands, probable binding sites have been located. The molecules are subjected to ‘site identification by ligand competitive saturation (SILCS) by allowing the target molecule and small fragment molecules to simultaneous molecular dynamic simulation in the NVE ensemble using CHARMm force field and noting the preferential saturation site of the target by the fragments, which would be the hotspot of the target.

The protein molecules are subjected to sequence and structural analysis. The conformationally biased nature of the target molecules has been studied through MD simulation in the NVE ensemble at 310K temperature.

By de novo receptor algorithm, suitable fragments interacting with the hotspot of the target have been identified with energy estimate as the scoring function, allowing equal probabilities for the liphophilic and hydrophilic sites 8. A combinatorial library has been set up with the molecules generated by 'Fragment Based Drug Design (FBDD) technique of Accelrys Discovery Studio 9.

Screening and scoring of the molecules have been done using pharmacodynamic and pharmacokinetic norms. The major attributes used are, probability for absorption, distribution, metabolism, excretion, other physical properties like solubility, IC50, lipophilicity, ligand efficiency, fit quality etc. 8. Based upon the scoring function, pharmacophoric points and hotspots of all target molecules, ligand template has been designed.

The template is further subjected to molecular evolution within the hotspot of the target to generate higher evolutions of the template. Evaluation of the molecules has been made based upon the enrichment factor by comparing their efficiency with two standard reference molecules (Ref1 and Ref2). Due to technical reasons the exact names of the ligands are not revealed.

Ligand efficiencyis the ratio of Gibbs free energy (ΔG) to the number of non-hydrogen atoms.

Lipophilic efficiencyis a measure of ligand linking potency or lipophilicity.

Where HA-number of heavy atoms

IC50: Half maximal inhibitory concentration- it means the effectiveness of a compound in suppressing a biological action.

RESULTS AND DISCUSSIONS: Eight ras GTPase complexes, 1K8R, 2KE5, 2UZI, 2VH5, 4GZL, 4GZM, 3GFT and 3TSO have been identified from the repository. By sequence analysis, the properties such as instability index, aliphatic index, half-life period and theoretical pI have been computed (Fig. 1).  All the protein molecules are found to be having a high aliphatic index (76 to 92) supporting their thermodynamic stability as expected for any cancer target protein. The instability index predicts structural stability to most of the target proteins excepting 1K8R and 1KE5.

The instability of these protein molecules is expected to be due to the presence large number of small residues. Half-life period of proteins vary from 1 to 30 hours. The proteins, 2UZI, 2VH5 and 2KE5 keeping low half-life period are the consequences of recent unstabilized mutations. The observed low pI values of these protein molecules may be an adaptation to exist in the neutral form in the acidic cancer environments. 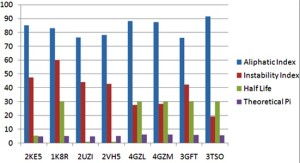 FIG. 1 SEQUENCE ANALYSIS AND PROPERTIES DERIVED FROM IT

Protein scanning using CASTp predicts 10 large numbers of pockets on the protein surface with an average mouth size of 1548 (Å) 2. The presence of large number of pockets on the surface of protein molecules may be due to the heavy mutational pressure experienced by them. The secondary structure prediction using SOPMA predicts only 22 to 29% random coil structure suggesting the molecules to be functionally stable 11.

A close observation on the naturally occurring protein complexes 12, the hotspot of the target with a preferential binding possibility is identified as GLY15, LYS16 and GLY60 (Fig. 2 and Table 1). 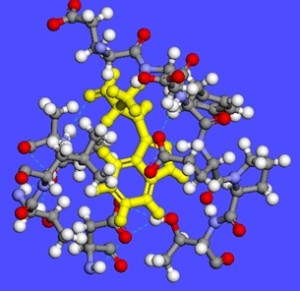 The ‘site identification by ligand competitive saturation (SILCS)’ with small ligand molecules further supports the same sites as the hotspot. The molecular dynamic simulation studies of protein molecules in the NVE ensemble using CHARMm forcefield suggest them to be conformationally biased. It is assumed that the most suitable conformer of protein providing maximum interaction with the ligand would be taken up during interaction with other molecules 13.

However, the conformationally biased nature of protein acts as a constraint during drug design providing an element of uncertainty to the binding results. This drawback is overcome to a large extend by providing maximum flexibility to the ligand molecules 14.

In the present work, the CDOCKER algorithm of Accelrys Discovery Studio, which makes use of a ‘molecular dynamic’ protocol has been used for docking studies to provide maximum freedom to ligand molecules.

The ‘fragment based drug design’, within the hot spot of the target molecules adopted in the work, generates 256 primary molecules, out of which, 236 molecules have been identified as more interacting based up on the thermodynamic analysis 15.These molecules are further subjected to screening using pharmacokinetic and pharmacodynamic requirements 16, 17.

Six molecules have been screened out as the most suitable drug templates (Table 2). The efficiency of templates has been compared with two standard known anticancer molecules, Ref1 and Ref2 (Table 3). The template molecules are found to be less toxic as suggested by the higher IC50 values and with comparable values of ligand efficiency and lipophilic efficiency 11.

These new templates are expected to be more promising, satisfying most of the ‘hit to lead’ conditions. New generations of molecules can be evolved from these templates which would be highly promising. However, further in vitro and in vivo evaluation is required in this.

TABLE 4: ENRICHMENT FACTORS WITH RESPECT TO THE STANDARD MOLECULES

CONCLUSION: Ras GTPase has been identified as a potential target for designing anti-cancer drugs. Due to the high possibility for mutation, and strong association for most of the cancers, the drug designing strategy needs further focusing. Designing the drug template from the hot spot of protein molecules and optimizing the pharmacophoric properties of the template with respect to other target molecules provide more promising templates. In the present work, after optimization and screening from 256 templates, TEMP1, TEMP2, TEMP3, TEMP4, TEMP5 and TEMP6 are found to be the lead templates.

The enrichment factors of these templates with respect to two standard reference drug molecules support the above result. These templates can be further evolved or modified to make lead molecules.