RECENT APPROACHES AND PHARMACEUTICAL APPLICATIONS OF NATURAL POLYSACCHARIDES: A REVIEW

RECENT APPROACHES AND PHARMACEUTICAL APPLICATIONS OF NATURAL POLYSACCHARIDES: A REVIEW

ABSTRACT: Polysaccharides obtained from gums and mucilages are extensively used natural materials for conventional and novel dosage forms. Many natural gums are studied for use in novel drug delivery systems out of which polysaccharides, resins and tannins are most extensively studied and used. Because of advances in drug delivery technology, natural polysaccharides are included in novel drug delivery to fulfil multitask functions and in some cases directly or indirectly control the extent or rate of drug release. Regular research is going on in the field of use of naturally occurring biocompatible polymeric material in designing of dosage forms for oral controlled release administration. The natural polysaccharides improve the national economy by providing inexpensive formulations to people, by using locally available materials. The present review covers almost all the areas of interest of some very important naturally based polysaccharides, natural gums and mucilages with their sources, chemical constituents, chemical structures, isolation, purification, standardization and characterization along with their uses in various pharmaceutical formulations.

INTRODUCTION: Polysaccharides are a diverse class of polymeric materials of natural (animal, plant, algal) origin formed via glycosidic linkages of monosaccharides. Dependent upon the nature of the monosaccharide unit, polysaccharides can have a linear or branched architecture.

In addition to structural diversity, polysaccharides have a number of reactive groups, including hydroxyl, amino, and carboxylic acid groups, indicating the possibility for chemical modification.

Natural polysaccharides and their derivatives represent a group of polymers widely used in the pharmaceutical and biomedical fields for the controlled release of drugs. The advantages of controlled drug delivery systems are mainly the achievement of an optimum concentration, usually for prolonged times, the enhancement of the activity of labile drugs, due to their protection against hostile environments, and the diminishing of side effects due to the reduction of high initial blood concentrations. The polysaccharides have advantages over the synthetic polymers, generally because they are non-toxic, less expensive, biodegradable, and freely available, compared to their synthetic counterparts 2.

Advantages of natural polysaccharides in pharmaceutical sciences are:

Isolation and purification of gums/mucilages (Polysaccharides):

Plant material is dried in sunlight (preferably) to retain its properties unchanged. Generally, chlorophyll or pigments are present in the plant which should be removed before isolating the mucilage. Plant material must be treated with petroleum ether and chloroform (to remove pigments and chlorophyll) and then with distilled water. Care should be taken when drying the final isolated/extracted mucilage. It must be dried at a very low temperature (not more than 50˚C) or in a vacuum. The dried material is stored carefully in desiccators to prevent further moisture uptake or degradation 8.

The general isolation and purification processes for gums and mucilages are shown in the flowchart: 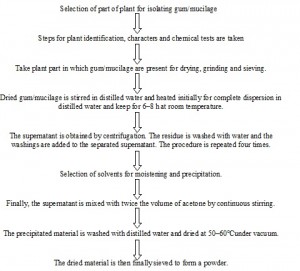 The Botanical name of okra gum is Abelmoschus esculentus Linn. It is obtained from the fruits of Hibiscus esculentus belonging to the family Malvaceae 12. The Chemical constituents include D-galactose, L-rhamnose and L-galacturonic acid with some proportions of glucose, mannose, arabinose and xylose 13.

It can be extracted from 1 kg of fresh immature fruits of Okra which were purchased from the market. The seeds were carefully removed from the fruits, and then the fresh immature fruits were cut into pieces, homogenized and then finally extracted with cold water containing 1% w/v of sodium meta-bisulphate. The crude mucilage was formed which was then centrifuged at 3000 rpm for 5 min. The gum formed was precipitated from the supernatant with acetone. The gum was washed several times with acetone to obtain a cream coloured product which was dried under vacuum in the desiccators. After complete removal of the moisture a light brown coloured product was obtained. The dried gum was then made into a powder form by pulverizing using an end runner mill and passed through 0.25 mm stainless steel sieve. The finally obtained powder was stored in a well closed amber coloured specimen bottle until ready for use 14, 15.

The Chemical constituents includes 15.4 - 12.7 % Protein, 3 - 7.5 % Oil, 7 - 8.2 % Crude fibre, 61 - 72.2 % Non fibre carbohydrates, 2.45 - 3.3 % Ash. Chemically tamarind kernel powder is highly branched carbohydrate polymer. Its backbone consists of D-glucose units joined with (1-4) b-linkages similar to that of cellulose. It consists of a main chain of b-D- (1-4)- galactopyranosyl unit with a side chain of single xylopyranosyl unit attached to every second, third and fourth of D-glucopyranosyl unit through a-D- (1-6) linkage. One galactopyranosyl unit is attached to one of the xylopyranosyl units through b-D- (1-2) linkage. The exact sequential distribution of branches along the main chain is uncertain 24, 25. 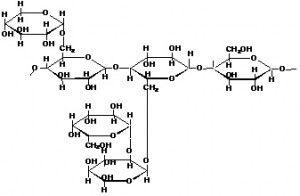 Tamarind gum is extracted from the tamarind kernel powder which was collected from seeds of plant. To 20g of tamarind kernel powder 200ml of cold distilled water was added and slurry was prepared. The slurry was poured into 800ml of boiling distilled water. The solution was boiled for 20 minutes under stirring conditions on a water bath. The resulting thin clear solution was kept overnight so that most of the proteins and fibres settle down. The solution was then centrifuged at 500 rpm for 20 minutes. The supernatant was separated and poured into twice the volume of absolute ethanol by continuous stirring. The product was filtered through muslin cloth and was washed with absolute ethanol, isopropanol, methanol and then dried at -50-60˚C under freeze dryer. The dried material was ground and sieved to obtain granules of different particle size range and stored in a desiccator until further use 26, 27.

Guar gum is a polysaccharide composed of the sugars galactose and mannose. The backbone is a linear chain of β 1,4- linked mannose residues to which galactose residues α-1,6 are linked at every second mannose, forming short side branches. 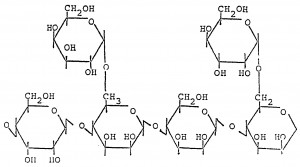 Guar gum is extracted and prepared by first drying the pods in sunlight, then manually separating from the seeds. The gum is commercially extracted from the seeds essentially by a mechanical process of roasting, differential attrition, sieving and polishing. The seeds are broken and germ is separated from the endosperm. Two halves of the endosperm are obtained from each seed and are known as undehusked guar splits. Refined guar splits are obtained when the fine layer of fibrous material, which forms the husk, is removed and separated from the endosperm halves by polishing. The refined guar splits are then treated and finished into powders by a variety of routes and processing techniques depending upon the desired end product28. 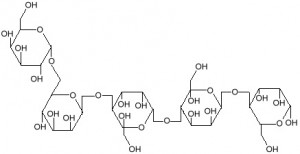 The seeds are dehusked by treating the kernels with thermal mechanical treatments, followed by milling and screening of the peeled seeds to obtain the endosperm (native carob bean gum). The pre-treated dry powder of crude carob bean gum CBG was extracted with distilled water (ratio of water to endosperm of seeds (197:1), temperature of the water bath 97°C, for a given time (extraction time 36 min). The solution and the solid-phase were separated by centrifugation at (21875rpm, 1h). The Carob Bean Gum is precipitated with one volume excess of isopropanol. The white fibrous precipitate formed was collected by filtration with screen 45µm, and washed twice with isopropanol and with acetone. After drying under vacuum overnight at 30°C, the precipitate was ground to a fine powder 33.

The biological name of ispaghula is Plantago ovata which is derived from the dried ripe seeds of Plantago psyllium and Plantago indica, the ispaghula husk is derived from the ripe seeds of Plantago ovate belonging to the family Plantaginaceae 40. Chemically the seed contains pentosan and aldobionic acid, 5-10% lipids with unsaturated fatty acids, sterols, proteins (15-18%), traces of cyclopentano pyridine-type of alkaloids, aucubin and carbohydrates-planteose, also a trisaccharide, and 10-12% mucilage of the heteroxylan type 41.

Chemically it consists of repeating tetrasaccharide units of glucose, glucuronic acid and rhamnose residues in a ratio of 2:1:1. [→3)–β–D–glucose–(1→4)–β–D–glucuronic acid–(1→4)–β–D– glucose–(1→4)–α–L–rhamnose–(1→]. In the native polymer two acyl substituents, L-glyceryl at O(2) and acetyl at O(6), are present on the 3-linked glucose. On average, there is one glyceryl per repeating unit and one acetyl for every two repeating units 46.

Biological name of fenugreek is Trigonella Foenum-graceum. It is obtained from the endosperm of the seeds belonging to family Leguminosae. Chemically fenugreek seeds contain oils, alkaloids, amino acids like (lysine, argenine, tryptophan, threonin, valyn  and methionin) and  musilages that is most famous in this plant is galactomannan, it also contains vitamins A, C, D, B1 and , minerals calcium, iron and zinc. Fenugreek seeds also contain 50% fibre out of which 20% is insoluble fibre and 30%is soluble fibre 51.

Fenugreek polysaccharide is extracted by dissolving 20gm of fenugreek seeds in 200ml double distilled water and boiled with stirring up till the slurry is formed, further it was kept to cool for 3 to 4 hours so as to separate the supernatant liquid. The clear solution at the top was decanted and the rest was centrifuged at 500rpm for 20 minutes. The supernatant was separated and heated at 60ºC on water bath to concentrate the supernatant. The solution after heating was cooled to the room temperature and was then poured into thrice the volume of acetone with continuous stirring. The precipitates were formed and then the precipitated material was washed with distilled water and again dried at 50-60º under vacuum. The powder so obtained was stored in a desiccator until use 52.

Stem exudes a gum which is initially white in colour but changes to reddish brown or brownish 3 black on exposure. It has the capability to protect the active drug from stomach and small intestine and so it can be used in colon targeted drug delivery. It has been reported to have binding property, release retardant property and gelling effect 57, 58.

Moringa Oleifera gum can be extracted after collecting it from the trees (Injured site). It was dried, ground and passed through sieve no 80. Dried gum (10g) was stirred in distilled water (250ml) for 6- 8 hours at room temperature. The supernatant was obtained by centrifugation. The residue was washed with water and the washings were added to supernatant.

The procedure was repeated four times. Finally the supernatant was made up to 500 ml and the treated with twice the volume of acetone by continuous stirring. The precipitated material was washed with distilled water and dried at 50-60ºC under vacuum 59.

CONCLUSION: Polymers play a essential role in the drug delivery. So, the selection of polymer plays an important role in pharmaceutical formulation. Care has to be taken while selecting polymers, regarding its toxicity, drug compatibility and degradation pattern. Natural gums are promising biodegradable polymeric materials.  The use of natural gums for pharmaceutical applications is attractive because they are economical, readily available, non-toxic, and capable of chemical modifications, potentially biodegradable. However, there is a need to develop other natural sources as well as with modifying existing natural materials for the formulation of novel drug delivery systems, biotechnological applications and other delivery systems. Therefore, natural polymer and their modifications have gained continue interest for the development of better materials for drug delivery system.

ACKNOWLEDGMENT: The authors wish to thank Chandigarh College of Pharmacy, Landran for providing facilities to prepare this manuscript.