RECENT APPROCHES OF “IMPURITY PROFILING” IN PHARMACEUTICAL ANALYSIS: A REVIEW

RECENT APPROCHES OF “IMPURITY PROFILING” IN PHARMACEUTICAL ANALYSIS: A REVIEW

Impurity is something that is impure or makes something else impure. An impure substance may be defined as follows: a substance of interest mixed or impregnated with an extraneous or usually inferior substance, from the standpoint of its usage, the drug substance is compromised in terms of purity even if it contains another material with superior pharmacological or toxicological properties.  The impurity may be developed either during formulation, or upon aging of both API’s and formulated API’s in medicines. The presence of these unwanted chemicals, even in small amount, may influence the efficacy and safety of the pharmaceutical products. The impurities are not necessarily always inferior. Highly sophisticated instrumentation, such as mass spectra meters attached to a Gas Chromatography or HPLC, are inevitable tools in the identification of minor components (drugs, impurities, degradation products, metabolites) in various matrices. Present article reveals different impurities found in the API’s, methods for identifying them and the possible measures to deal with the interferences caused by them in pharmaceutical analysis.

INTRODUCTION: The purity of a drug product is in turn determined on the basis of the percentage of the labelled amount of API found in it by a suitable analytical method. The presence of some impurities may not deleteriously impact on drug quality if they have therapeutic efficacy that is similar to or greater than the drug substance itself. Nevertheless, drug substances can be considered as compromised with respect to purity even if it contains an impurity with superior pharmacological or toxicological property.

Consequently, in order to ensure that an accurate amount of the drug substance is being administered to the patient, drug substance purity must be assessed independently from these undesirable extraneous materials (e.g., inert, toxic, or pharmacologically Superior impurities).

Impurity profiling is the common name of a group of analytical activities, the aim of which is the detection, identification/structure elucidation and quantitative determination of organic and inorganic impurities as well as residual solvents in bulk drugs and pharmaceutical formulations. The different pharmacopoeias, such as the British Pharmacopoeia (BP) and the United States Pharmacopoeia (USP) are slowly incorporating limits to allowable levels of impurities present in the API’s or formulations.

Canadian Drug and Health Agency are emphasizing on the purity requirements and the identification of impurities in Active Pharmaceutical Ingredients (API’s).

Qualification of the impurities is the process of acquiring and evaluating data that establishes biological safety of an individual impurity thus, revealing the need and scope of impurity profiling of drugs in pharmaceutical research. International Conference on Harmonization (ICH) has published guidelines on impurities in new drug substances, products and residual solvents.

There is a good significant demand for the impurity-reference standards along with the API reference standards from both regulatory authorities and pharmaceutical companies. The estimation of impurity profiles in drug substances and related materials has become one of the most important fields of activity in contemporary pharmaceutical analysis. In general, all impurities present in excess of 0.1% should be identified, for the following reasons 1-3:

ICH Q3A covers drug substances and Q3B covers drug products. These guidelines define what investigations and documentation should be made in investigating impurities and degradation products seen in stability studies at recommended storage conditions. In general, according to ICH guidelines on impurities in new drug products, identification of impurities below the 0.1% level is not considered to be necessary unless the potential impurities are expected to be unusually potent or toxic. In all cases, impurities should be qualified. If data are not available to qualify the proposed specification level of an impurity, studies to obtain such data may be needed (when the usual qualification threshold limits given below are exceeded).  According to ICH, the maximum daily dose qualification threshold is considered as follows 4-7:

Sources/Types of impurity in Medicine: The pharmaceutical preparation should be free from toxic and other impurities. Pharmacopoeia prescribes limits for harmful compound present in substances. 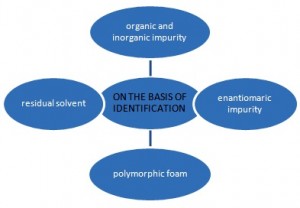 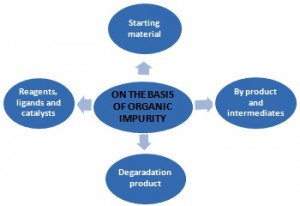 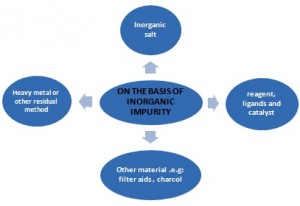 Raw Materials employed in the Manufacturing of the Pharmaceutical Substance: Pharmaceutical substances are either isolated from natural sources or synthesized from chemical starting materials. The natural sources include mineral sources, plants, animals and microbes. It is essential to verify the identity of the source material and to establish its quality otherwise impurities associated with the raw materials may be carried through the manufacturing process to contaminate the final product. In nature minerals rarely occurs in a reasonably pure from.

Anions like Cl- and SO4-2 are common impurities in many substances because of the use of hydrochloric acid and sulphuric acid respectively in processing. Barium ion may be an impurity in hydrogen peroxide so, hydrogen peroxide employed as reagent in the manufacturing process can contaminate the final product.

Various types of water which are available are;

Similarly, glass vessels may give traces of alkali to the solvent. Lead (Pb) may be found as impurity in commercial sulphuric acid which has been manufactured by lead chamber process. Also, substances prepared by same electrolytic process, may contain electrode material as an undesirable impurity e.g., antimony, bismuth etc.

The sodium bromate an intermediate product is reduced to sodium bromide by heating the residue     (obtained by evaporating the solution to dryness) with charcoal.

Calcium hydroxide solutions can absorb carbon dioxide from the atmosphere to for calcium carbonate.

The photosensitive substances should be protected from light by storing them in darkened glass or metal containers thereby inhibiting photochemical decomposition. Materials susceptible to oxidation by air or attack by moisture should be stored in sealed containers and if necessary the air from the containers can be displaced by an inert gas such as Nitrogen. Oxidation can also be prevented by adding suitable antioxidants which are capable of undergoing oxidation at the expense of the substances.

Particle size and consequently surface area is a critical factor in determining the bioavailability of the low solubility drug such as griseofulvin. Physical changes such as sedimentation and claying in case of multi dose suspension may constitute a safety hazard leading to the possibility of under dosage and later to over dosage of the drugs. Similarly increase in the globule size of the injectable emulsions on storage may lead to fat embolism.

The single enantiomeric form of chiral drug is now considered as an improved chemical entity that may offer a better pharmacological profile and an increased therapeutic index with a more favourable adverse reaction profile. However, the pharmacokinetic profile of levofloxacin (S-isomeric form) and ofloxacin (R-isomeric form) are comparable, suggesting the lack of advantages of single isomer in this regard 28. The prominent single isomer drugs, which are being marketed, include levofloxacin (S-ofloxacin) lavalbuterol (R-albuterol), and esomeprazole (S- omeprazole).

A selective gas chromatography (GC) method has been developed to determine the purity of acetone, dichloromethane, methanol and toluene. Using this method, the main contaminants of each organic solvent can be quantified. Moreover, the developed method allows the simultaneous determination of ethanol, isopropanol, chloroform, benzene, acetone, dichloromethane, methanol and toluene with propionitrile as the internal standard 30.

For example, impurity profiling of ecstasy tablets by GC-MS 31, and MDMA samples, produced impurities in intermediates via reductive amination route 32.

In general, liquid dosage forms are susceptible to both degradation and microbiological contamination. In this regard, water content, pH of the solution/suspension, compatibility of anions and cations, mutual interactions of ingredients, and the primary container are critical factors. Microbiological growth resulting from the growth of bacteria, fungi, and yeast in a humid and warm environment may results in unsuitability of an oral liquid product for safe human consumption.

Microbial contamination may occur during the shelf life and subsequent consumer-use of a multiple-dose product, either due to inappropriate use of certain preservatives in the preparations, or because of the semi-permeable nature of primary containers 35.

The conditions of the autoclave method (i.e., 123 + 2oC) enforce the intramolecular cyclic reaction of diclofenac sodium forming an indolinone derivative and sodium hydroxide. The formation of this impurity has been found to depend on initial pH of the formulation.

The marketed samples of vitamin B-complex injections were found to have a pH range of 2.8 - 4.0. A custom-made formulation with simple distilled-water and a typical formulated vehicle including disodium edetate and benzyl alcohol were investigated, and similar mutual interactions causing degradation were observed.

Photolytic cleavage includes example of pharmaceutical products that are exposed to light while being manufactured as solid or solution, packaged, or when being stored in pharmacy shops or hospitals for use by consumers. Ergometrine 40, nifedipine 41, nitroprusside, riboflavin and pheno-thiazines are very liable to photo-oxidation. In susceptible compounds, photochemical energy creates free radical intermediates, which can perpetuate chain reactions. Most compounds will degrade as solutions when exposed to high-energy UV exposures.

Fluroquinolone antibiotics are also found to be susceptible to photolytic cleavage 42. In ciprofloxacin eye drop preparation (0.3%), sunlight induces photocleavage reaction producing ethylenediamine analog of ciprofloxacin 43. Decarboxylation of some dissolved carboxylic acids, such as p-aminosalycylic acid; shows the loss of carbon dioxide from the carboxyl group when heated. An example of decarboxylation is the photoreaction of rufloxacin 44.

As seen earlier, impurities in drug products can come from the drug or from excipients or can be brought into the system through an in-process step by contact with the packaging material. For most drugs, the reactive species consist of;

Metal oxides such as NaO2, SiO2, CaO, MgO, are the major components leached/extracted from glass 45.

Some examples of leachable/extractables from synthetic materials include styrene from polystyrene, 47 ethylhexylphalate (DEHP, plasticizer in PVC), 48 dioctyltin isooctylmercapto-acetate (stabilizer for PVC), 49 zinc stearate (stabilizer in PVC and polypropylene), 50 2-mercaptobenzothiazole (accelerator in rubber stopper), 51 and furfural from rayon 52. These impurities are needed to be analyzed by using different analytical methods.

CLASSIFICATION OF METALS ON THE BASIS OF THEIR SAFETY CONCERN

CLASSIFICATION OF Q-GUIDELINE ON THE BASIS OF IMPURITY 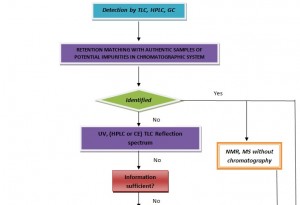 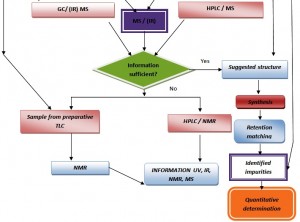 The impurities can be identified predominantly by following methods 13-16;

In summary, IR, NMR, and MS are excellent techniques for characterization of impurities that have been isolated by any of the techniques discussed above. UV has been found to be especially useful for analysing most samples with high-pressure liquid chromatography. This combination is commonly used in pharmaceutical analysis.

Capillary electrophoresis is a useful technique when very low quantities of samples are available and high resolution is required. The primary difficulty is assuring reproducibility of the injected samples.

A list of methods that can be used for isolation of impurities is given below.

An example of reverse-phase LC-MS analysis in gradient elution with two distinct soft ionization techniques is the Atmospheric pressure ionization with electrospray source (API-ESI) and the chemical ionization of d-allethrine 25.

HPLC-DAD-MS (HPLC coupled with a diode array UV detector and a mass spectrometer, and such other techniques are almost routinely used.

IMPURITIES PRESENT AND METHOD OF ANALYSIS IN MARKETED DRUGS

CONCLUSION: This review provides a perspective on impurities in drug substance and drug product. Impurity profile of pharmaceuticals is receiving an increasing importance and drug safety receives more and more attention from the public and from the media. This article provides the valuable information about the impurities types and its classification, various techniques of isolation and characterization, analytical techniques for the determination, qualification of impurities and critical factors to be considered while preparation of the bulk drugs. Now a day, it is mandatory requirement in various pharmacopoeias to know the impurities present in API’s. Isolation and characterization of impurities is required for acquiring and evaluating data that establishes biological safety which reveals the need and scope of impurity profiling of drugs in pharmaceutical research.