ABSTRACT: Diabetes is the most common lifestyle disease associated with many serious worries including diabetic ketoacidosis, cardiac problems, kidney failure, non ketotic hyperosmolar coma, foot ulcers, eye damage etc. All these complications develops due to abnormalities in carbohydrate metabolism and insulin synthesis resulting in high blood sugar with symptoms such as elevated hunger and thirst, polyuria, glycosuria, lethargy etc. The article is focused on different targets of diabetes.

INTRODUCTION: Type 2 diabetes mellitus or non-insulin-dependent diabetes mellitus (NIDDM) or adult onset diabetes is a chronic metabolic disorder characterised by hyperglycaemia (fasting and post-prandial). Due to its increasing incidence across the globe, it affects nearly about 5% of the total population in the urbanizednations.1, 2 and accounts for about 90% of all the diagnosed cases, thereby becoming one of the biggest challenges in 21st century 3-5 leading to hyperglycaemia, insulin resistance and obesity, etc. 6-8. According to the International Diabetes Federation (IDF), the global prevalence of diabetes is predicted to grow from 366 million in 2011to 552 million by 2030 9. The major incidence of diabetes mellitus will occur in Asia, mainly China and India (57 million in India). 10, 11

It is a widespread syndrome leading to insulin resistance in target tissue, adipose tissue, liver and skeletal muscles and disproportionate glucose production by liver.12-16 Resistance to insulin is a major health factor in diabetes mellitus 17. In order to avoid severe complications and to obtain desirable blood sugar levels, improving sensitivity to insulin must be the first task. Thiazolidinedione’s (TZDs) are found to be excellent examples for improving sensitivity to insulin and avoiding serious complications 18, but are avoided due to its side effects such as liver toxicity, retention of fluid etc.19 Four major pharmacological agents available widely for treatment of diabetes includes insulin secretagogues sulfonylureas 20-22, bigunides 23-27, glitazones 28-32 and acarbose.33-35 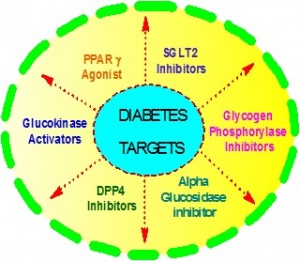 Zhang.H.et al 44 has designed, synthesized and carried out structure–activity relationships of a novel series of N-phenyl-substituted pyrrole, 1,2-pyrazole and 1,2,3-triazole acid analogs as PPAR ligands.

Nazreen.S.et al 46 has synthesized a library of conjugates of chromones and 2,4-thiazolidinedione by Knoevenagel condensation followed by reduction using hydrogen gas and Pd/C as a catalyst.

Yu.J.et al 47 has synthesized a series of benzopyran derivatives and evaluated for PPAR a/g. agonist activities. All of the synthesized compounds were characterized by spectral analysis.

Nazreen.S.et al 48 has synthesized a novel series of 1,3,4-oxadiazole and 2-4-thiazolidinedione based bis-heterocycles which exhibited significant PPAR-g transactivation and blood glucose lowering effect comparable with the standard drugs.

Xio.B. et al 51 has synthesized 20 analogson the basis of a marine fungal phthalide (paecilocin A) skeleton, and characterized them with spectral analysis.

Zhou.L.et al 53 has designed and synthesized a series of 2-thioxo-4-thiazolidinone derivatives and evaluated them on peroxisome proliferator activated receptor g (PPARg) binding activities. 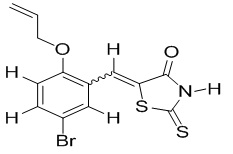 Zhang. L. et al 54 has designed and synthesized a series of novel phenyl urea derivatives which can simultaneously activate glucokinase (GK) and peroxisome proliferator-activated receptor g (PPARg). The possible binding mode of these compounds with GK and PPARg were predicted by molecular docking simulation. 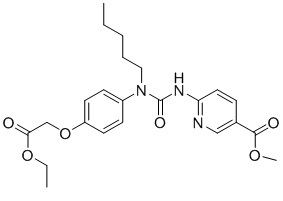 SGLT2 inhibitors are high capacity Sodium-dependent glucose co-transporters that have low-affinity, and located exclusively at the apical domain of the epithelial cells in the early proximal convoluted tubule. It accounts for 90% of the total renal glucose absorptions.55, 56

Ikegai.K.et al 59 has synthesized a series of C-glucosides with azulene rings in the aglycon moiety and the inhibitory activities toward hSGLT1 and hSGLT2 were then assessed. The compound having 3-[(azulen-2-yl)methyl]phenyl group was identified as a lead compound for further optimization.

Guo.C.et al 60 has designed, synthesized and carried out structure– activity relationship (SAR) of C-glycosides with benzyltriazolopyridinone and phenylhydantoin as the aglycone moieties as novel SGLT2 inhibitors.

Zhang.S.et al 62 has designed and synthesized seven cyclohexane-bearing C-glucoside derivatives as SGLT2 inhibitors and then characterized by spectral analysis.

Glycogen phosphorylase inhibitors inhibits the enzyme glycogen phosphorylase which is responsible for glycogen conversion to glucose and related metabolites.63 Pharmacological inhibition of GP has been proved to be an effective therapeutic approach for treating diseases caused by abnormalities in glycogen metabolism, such as type 2 diabetes, myocardial ischemia, and tumors.64-66

Wen.X.et al 67 has synthesized a series of maslinic acid derivatives and their effect on rabbit muscle glycogen phosphorylase was evaluated and their SAR has been discussed. 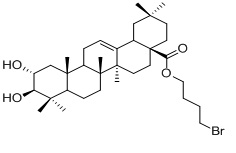 Goyard.D.et al 68 has synthesized a series of eight GP inhibitor candidates from per acetyl glucopyranosyl azide by click-chemistry. The N-Boc-protected amine was the best inhibitor (IC50 = 620 lM) unpredictablysomewhatsuperior than the 2-naphthylamido substituted analogue (IC50 = 650 lM).

Chen.L.et al 69 has designed and synthesized a series of novel benzamide derivatives and their inhibitory activities against glycogen phosphorylase (GP) in the direction of glycogen synthesis by the release of phosphate from glucose-1-phosphate were evaluated and their structure activity relationship has been established.

Zhang.L.et al 70 has synthesized a series of benzamide derivatives which can simultaneously inhibit glycogen phosphorylase (GP) andactivate glucokinase (GK) and their structure–activity relationship (SAR) has been established.

α-Glucosidase inhibitors reversibly inhibits the enzyme α-Glucosidase which is responsible for hydrolysing  carbohydrates to produces α-D-glucose, which enters blood stream, and increases postprandial blood glucose levels, finally leading to diabetes. Thus, for the control and prevention of diabetes, a-glucosidase inhibitors are of particular interest 71, 72.

Yar.M.et. al 73 has synthesised dihydropyrimidines by N-acetyl glycine (NAG) catalysed reaction of aromatic aldehydes with ethyl acetoacetate and urea/thiourea by a new conventional and efficient method. The method is also applicable for various substituted aldehydes as well as urea and thiourea. 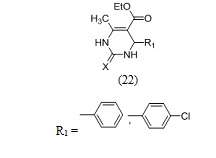 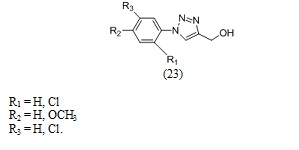 Niaz.H.et. al75 has synthesised1,4-Dihydropyridine-3,5-dicarboxylate derivatives via Hantzsch reaction and evaluated for their α-glucosidase inhibitory activity and their structures were then characterized by different spectroscopic techniques.

Cho. T. P. et. Al 82 has synthesiseda series of novel bicyclo[3.3.0]octane derivatives have been synthesized and found to be dipeptidyl peptidase 4 (DPP-4) inhibitors. 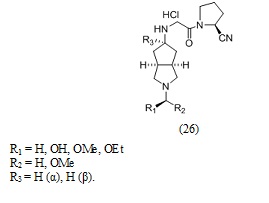 Wang. W. et. a l 83 has designed, synthesized and carried out SAR of 7-oxopyrrolopyridine-derived DPP4 inhibitors.

Glucokinase is an enzyme which is responsible for the regulation of glucose homeostasis. In the liver, it regulates the uptake and output of hepatic glucose, whereas in the pancreas it actsas a glucostat and establishes the threshold for β-cell glucose-stimulated insulin secretion.

Pfefferkorn. J. A. et. al 88 has synthesised a series of novel indazole and pyrazolopyridine based activators leading to the identification of 4-(6-(azetidine-1-carbonyl)-5-fluoropyridin-3-yloxy)-2-ethyl-N-(5-methylpyrazin-2-yl)-2H-indazole-6-carboxamide as a potential candidate. 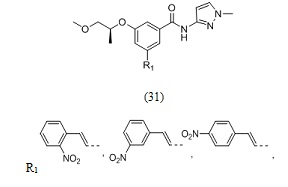 Zhang. L. et. al 90 has designed and evaluated a series of benzamide derivatives which can simultaneously inhibit glycogen phosphorylase (GP) and activate glucokinase (GK). The structure–activity relationships (SAR) of these compounds were also established.

Mao. W. et. al 91 has designed a series of benzamide derivatives and their SAR studies as glucokinase activators were described. 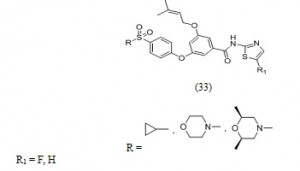 Park. K. et. al 92 has designed and synthesized novel heteroaryl-containing benzamide derivatives and screened using an in vitro assay measuring increases in glucose uptake and glucokinase activity stimulated by 10 mM glucose in rat hepatocytes. From a library of synthesized compounds, 3-(4-methanesulfonylphenoxy)-N-[1-(2- methoxy-ethoxymethyl)-1H-pyrazol-3-yl]-5-(3-methyl pyridin-2-yl)-benzamide was identified as a potent glucokinase activator. 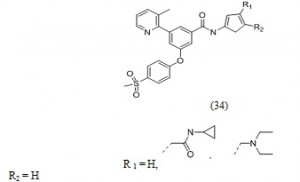 CONCLUSION: The article is focused on different targets of diabetes which can be explored with different inhibitors/activators for better treatment of this lifestyle disease