ABSTRACT: The aim of the present study was to investigate the effect of Curcumin on blood glucose levels, body weight changes, and oxidative stress markers in the diabetic rat liver. Diabetes exacerbates hepatic injury induced by hyperglycemia mediated oxidative stress. A marked decrease in the blood glucose levels, body weight changes and anti-oxidant marker enzymes, superoxide dismutase (SOD), catalase (CAT), glutathione peroxidase (GPx), glutathione reductase (GR) and increase in malondialdehyde (MDA) was observed in the diabetic rats. Decreased activities of antioxidant enzymes and body weights in diabetic rats were augmented on the oral administration of Curcumin. Moreover, Curcumin administration depleted the MDA level, which was earlier increased in the diabetic rats. These results suggest that Curcumin exhibits a hepatoprotective effect by accelerating hepatic anti-oxidant defense mechanisms and downregulating the MDA levels to the normal levels in the diabetic rats. Thus, Curcumin may be used as a therapeutic agent in preventing complications in diabetic patients.

INTRODUCTION: It is well known that the incidence of diabetes mellitus is high all over the world, especially in Asia. Different types of oral hypoglycaemic agents such as biguanides and sulphonylurea are available along with insulin for the treatment of diabetes mellitus 1, but have side effects associated with their uses 2, 3. There is a growing interest in herbal remedies because of their effectiveness, minimal side effects in clinical experience, and relatively low costs. Herbal drugs or their extracts are prescribed widely, even when their biologically active compounds are unknown. Even the World Health Organization (WHO) approves the use of plant drugs for different diseases, including diabetes mellitus.

Therefore, studies with plant extracts are useful to know their efficacy and mechanism of action and safety. Medicinal plants useful in diabetes were reviewed recently 4, 5. Curcumin, polyphenols, has been shown to target multiple signaling molecules while also demonstrating activity at the cellular level, which has helped to support its multiple health benefits 6. It has been shown to benefit inflammatory conditions 7 metabolic syndromes 8, pain 9, and to help in the management of inflammatory and degenerative eye conditions 10. In addition, it has been shown to benefit the kidneys 11.

While there appear to be countless therapeutic benefits tocurcumin supplementation, most of these benefits are due to its antioxidant and anti-inflammatory effects 6, 7. Despite its reported benefits via inflammatory and antioxidant mechani-sms, one of the major problems with ingesting curcumin by itself is its poor bioavailability 12. Curcumin has been shown to improve systemic markers of oxidative stress 13. There is evidence that it can increase serum activities of antioxidants such as Superoxide Dismutase (SOD) 14-16. Thus, the present study is investigated the convalescence of diabetic induced oxidative damage in liver tissue by treatment with Curcumin in rats.

Animals: Wistar strain of rats, weighing about 180 ± 20 g used in the experiments. Animals were kept in our animal house at an ambient temperature of 25 °C with 12 h each of dark and light cycles.

Animals were fed pellet diet of Sai Durga feed, Bangalore, and water ad-libitum. For the experimental purpose, the animals were kept fasting overnight but were allowed free access to water. The experiments were carried out in accordance with guidelines and protocol approved by the Institutional Animal Ethics Committee (Regd. No: 488/01/a/CPCSEA/ dt.17.07. 2001).

Chemicals: STZ was obtained from Sigma Chemicals (USA). All the other chemicals used were of analytical grade.

Induction of Diabetes: The animals were fasted overnight, and diabetes was induced by a single intraperitoneally injection of a freshly prepared solution of streptozotocin (STZ) (50 mg/kg body weight) in 0.1 M cold citrate buffer (pH 4.5). The animals were considered as diabetic if their blood glucose values were above 250 mg/dl on the third day after STZ injection Curcumin treatment was given to the diabetic rats for 30 days.

Grouping of Animals: The rats were divided into ﬁve groups, six rats in each group and treated as follows:

Group 3 Diabetic Control (STZ 50 mg/kg Body Weight) (DC): Streptozotocin is given intra-peritonially for the induction of diabetes to this group.

After completion of 30 days of treatment, the animals were sacriﬁced by cervical dislocation, and the liver tissues were excised at 4 °C. The tissues were washed with ice-cold saline, immersed in liquid nitrogen, and immediately stored at -80 °C for further biochemical analysis.

Analytical Procedures: SOD activity was assayed in the mitochondrial fraction by the method of Misra and Fridovich 17 at 480 nm for 4 min on a Hitachi U-2000 spectrophotometer. The activity was expressed as the amount of enzyme that inhibits the oxidation of epinephrine by 50%, which is equal to 1 U per milligram of protein. CAT activity was determined at room temperature by using the modiﬁed version of Aebi 18, and the absorbance of the sample was measured at 240 nm for 1 min in a UV-spectrophotometer. The activity of GPX was determined by the method of Flohe and Gunzler19 in the presence of NADPH, and absorbance was measured at 340 nm using cumene hydrogen peroxide. GR enzyme activity was determined according to the method of Carlberg and Mannervik 20. The extent of lipid peroxidation was estimated as the concentration of thiobarbituric acid reactive product MDA by using the method of Ohkawa et al., 21. All the enzyme activities were expressed per mg protein, and the tissue protein was estimated according to the method of Lowry et al., 22 using bovine serum albumin (BSA) as a standard. The blood glucose levels and body weights were measured by using the Accucheck glucometer (Roche-Germany) and an animal weighing machine, respectively.

Statistical Analysis: Analysis of variance (ANOVA) and Duncan’s multiple comparison tests among data were carried out using the SPSS (Version 16.5; SPSS Inc., Chicago, IL, USA) and M. S. Ofﬁce, excel software for the signiﬁcance of the main effects (factors), and treatments along with their interactions. Statistical signiﬁcance was set at p <0.05. 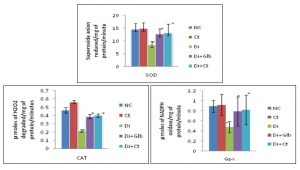 Fig. 2 depicts the activity of GR and the levels of MDA in the liver of all the experimental groups. The activity of GR was decreased in a diabetic liver group compared normal control, but it increased to the level of normal controls in the Curcumin treated diabetic group (p < 0.05). The production of thiobarbituric acid reactive substances (TBARS), MDA as an index of lipid peroxidation, is also presented in Fig. 2. The results demonstrate that the lipid peroxidation is increased in the diabetic liver as compared to the normal control group (p < 0.05).

DISCUSSION: Diabetes is possibly the world’s fastest-growing metabolic disease, and as knowledge of the heterogeneity of this disorder increases, so does the need for more appropriate therapies 1, 2. Currently, available drug regimens for management of diabetes have certain drawbacks such as vascular complications, hepatotoxicity, cardiotoxicity, and neuronal toxicity.

Management of diabetes with the agents devoid of any side effects is still a challenge to the medical system. This has led to an increase in the demand for natural products with anti-hyperglycemic activity and fewer side effects. Traditional plant medicines are used throughout the world for a range of diabetic conditions. The study of such medicines might offer a natural key to unlock a diabetologist’s pharmacy for the future, 4. Diabetes is associated with higher oxidative stress. ROS induced damage to the insulin-producing pancreatic beta-cells induces diabetes. Anti-oxidant therapy involving the use of herbs and spice has-been shown to protect the tissues against such damage. It has been shown that under physiological conditions, glucose may undergo auto-oxidation and contribute to ROS formation 5. Diabetes induced oxidative damage is responsible for the changes occurring in the activities of antioxidant enzymes leading to impaired hepatic activity. Streptozotocin injection resulted in diabetes mellitus, which may be due to destruction of beta cells of Islets of Langerhans as proposed by others 4, 5. Diabetes arises from irreversible destruction of pancreatic beta cells, causing degranulation and reduction of insulin secretion 2, 3. STZ-induced diabetes is characterized by a severe loss in body weight 23 and may exhibit most of the diabetic complications such as myocardial, cardiovascular, nervous, kidney, and urinary bladder dysfunction through oxidative stress 24. However, after 30 days, supplementation of curcumin to diabetic rats resulted in a signiﬁcant diminution of fasting blood glucose levels with respect to diabetic control rats, but no signiﬁcant alteration of fasting blood glucose level to the control, which further, strengthen the anti-diabetogenic action of Curcumin 25. The decrease in body weight in diabetic rats shows that the loss or degradation of structural proteins is due to diabetes, and structural proteins are known to contribute to the bodyweight.

The present study demonstrated that Curcumin treatment for 30 days shows anti-hyperglycaemic effect in diabetic rats. When diabetic rats were treated with Curcumin, the weight loss was recovered. Our results are supporting its use as folklore medicine for the treatment of diabetes. Curcumin treatment was comparable with glibenclamide treatment a standard hypoglycaemic drug Table 1. Oxidative stress is the imbalance between the production and removal of reactive oxygen species. Increased oxidative stress, which contributes substantially to the pathogenesis of diabetic complications, is the consequences of either enhanced ROS production or attenuated ROS scavenging capacity. Several reports have shown the alterations in the anti-oxidant enzymes during diabetic condition 27.

The endogenous antioxidant enzymes such as SOD, CAT, and GPx are responsible for the detoxification of deleterious oxygen radicals. SOD has been postulated as one of the most important enzymes in the enzymatic antioxidant defense system, which catalyzes the dismutation of superoxide radicals to produce H2O2 and molecular oxygen hence diminishing the toxic effects caused by these radicals 28. Catalase (CAT) is a hem-protein which catalyzes the reduction of hydrogen peroxides and protects the tissues from highly reactive hydroxyl radicals. GPx plays a primary role in minimizing oxidative damage. It has been proposed that GPx is responsible for the detoxification of H2O2 in low concentration, whereas catalase comes into play when GPx pathway is reaching saturation with the substrate. GPxcatalyze the reduction of hydrogen peroxide and hydroperoxides to non-toxic metabolites.

The reduction in SOD and catalase activities in diabetic conditions may be due to the direct glycation of enzyme protein 29. The increase in superoxide radicals in diabetes may inhibit the activity of catalase and glutathione peroxidase 30. GPx function is a concert with GSH in decomposing hydrogen peroxide generated from free radical mediated reactions. Due to decrease in the concentration of GSH, the activity of GPx is also decreased in diabetes. The diminished activity of GPx in diabetes elevates hydrogen peroxide and lipid peroxides leading to the accumulation of these oxidants and thus the subsequent oxidation of lipids. It has been concluded that the restoration of antioxidant defense system by the administration of Curcumin may be attributed mainly due to the presence of antioxidant photochemical. The tremendous increase in TBARS and hydro peroxides in liver tissues suggests an increase in oxygen radicals that could be due to either increased production or decreased detoxification which could be due to persistent hyperglycemias in diabetes 31. Maintenance of persistent normoglycemia by the administration of Curcumin may attenuate lipid peroxidation in tissues and thus prevent tissue damage.

CONCLUSION: From the results of the present study, it may be concluded that the anti-diabetic and antioxidant nature of Curcumin might be due to the presence of biologically active phytochemicals present in the extract. Further, the present study demonstrates the scientific rationale for the use of Curcumin in traditional medicine for the treatment of diabetes

ACKNOWLEDGEMENT: All authors express sincere gratitude to the Principal, SGS, Degree College, Tirupati for his guidance and suggestions during the experiment period, and also, the authors acknowledged the Dr. G. Venkata Subbaiah, S. V. University, Tirupati for his suggestions in the preparation of the manuscript.