REDUCTION OF ANTIBIOTIC RESISTANCE IN BACTERIA: A REVIEW

REDUCTION OF ANTIBIOTIC RESISTANCE IN BACTERIA: A REVIEW

INTRODUCTION: Today, there are about 4000 compounds with antibiotic properties. Antibiotics are used to treat and prevent infections, and to promote growth in animals. Antibiotics are derived from three sources: moulds or fungi; bacteria; or synthetic or semi-synthetic compounds. They can be used either internally or topically, and their function is to either inhibit the growth of pathogens or to kill them 1. Antibiotics can thus be divided into Bacteriostatic drugs, which merely inhibit the growth of the pathogen, and Bactericidal drugs, which actually kill the bacteria. Antibiotics can also be divided into broad-spectrum and narrow-spectrum antibiotics. For example, Tetracycline, a broad spectrum antibiotic, is active against G+ve bacteria, G-ve bacteria 11, 13, and even against mycobacteria; whereas penicillin, which has a relatively narrow spectrum 4, 7, can be used mainly against G+ve bacteria. Other antibiotics, such as Pyrazinamide, have an even narrower spectrum, and can be used merely against Mycobacterium tuberculosis. Antibiotics fight against bacteria by inhibiting certain vital processes of bacterial cells or metabolism. Based on these processes, we can divide antibiotics into five major classes:

Mechanisms of Antibiotic Resistance in Bacteria: The many mechanisms that bacteria exhibit to protect themselves from antibiotics can be classified into four basic types (fig. 1). Antibiotic modification is the best known: the resistant bacteria retain the same sensitive target as antibiotic sensitive strains, but the antibiotic is prevented from reaching it 2, 3. This happens, for example, with β-lactamases- the β-lactamase enzymatically antibiotics in Gram negative bacteria gain access to the cell that depends on the antibiotic, through water filled hollow membrane protein known as a porin (fig. 2). 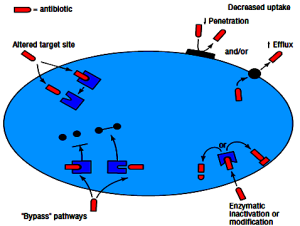 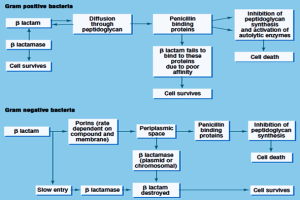 In the case of imipenem resistant Pseudomonas aeruginosa, lack of the specific D2 porin confers resist­ ance, as imipenem cannot penetrate the cell. This mechanism is also seen with low level resistance to fluoroquinolones and aminoglycosides. Increased efflux via an energy­ requiring transport pump is a well recognized mechanism for resistance to tetracyclines and is encoded by a wide range of related genes, such as tet(A), that have become distributed in the Enterobacteriaceae 4.

Alterations in the primary site of action may mean that the antibiotic penetrates the cell and reaches the target site but is unable to inhibit the activity of the tar­ get because of structural changes in the molecule. Enterococci are regarded as being inherently resistant to cephalosporins because the enzymes responsible for cell wall synthesis (production of the polymer peptidoglycan)—known as penicillin binding proteins —have a low affinity for them and therefore are not inhibited 5, 6.

Most strains of Streptococcus pneumoniae are highly susceptible to both penicillins and cephalosporins but can acquire DNA from other bacteria, which changes the enzyme so that they develop a low affinity for penicillins and hence become resistant to inhibition by penicillins. The altered enzyme still synthesizes peptidoglycan but it now has a different structure. Mutants of Streptococcus pyogenes that are resistant to penicillin and express altered penicillin binding proteins can be selected in the laboratory, but they have not been seen in patients, possibly because the cell wall can no longer bind the anti­phagocytic M protein.

The final mechanism by which bacteria may protect themselves from antibiotics is the production of an alternative target (usually an enzyme) that is resistant to inhibition by the antibiotic while continuing to produce the original sensitive target. This allows bacteria to survive in the face of selection: the alternative enzyme “bypasses” the effect of the antibiotic (Fig. 3). The best known example of this mechanism is probably the alternative penicillin binding protein (PBP2a), which is produced in addition to the “normal” penicillin binding proteins by methicillin resistant Staphylococcus aureus (MRSA) 10, 11.

The protein is encoded by the mecA gene, and because PBP2a is not inhibited by antibiotics such as flucloxacillin the cell continues to synthesize peptidoglycan and hence has a structurally sound cell wall. If an enterococcus acquires the vanA gene cluster, however, it can now make an alternative cell wall precursor ending in d­alanine­d­lactate, to which vancomycin does not bind 7. 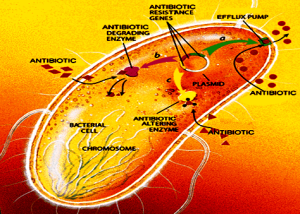 The goal in reducing antibiotic resistance in bacteria-

The benefits of reducing Antibiotic Resistance:

CONCLUSIONS: The problem of drug resistance was not very serious in the control of animal diseases nearly a decade or more ago. It is clear that bacteria will continue to develop resistance to currently available antibacterial drugs by either new mutations or the exchange of genetic information, that is, putting old resistance genes into new hosts 10, 11. In many healthcare facilities around the world, bacterial pathogens that express multiple resistance mechanisms are becoming the norm, complicating treatment and increasing both human morbidity and financial costs.