INTRODUCTION: Development of oral extended release systems has been a challenge to formulation scientists due to their inability to restrain and localize the system at targeted areas of the gastrointestinal tract. Specifically, the interest awakened by matrix type delivery is completely justified in view of its biopharmaceutical and pharmacokinetic advantages over the conventional dosage forms 1.

The drug release from hydrophilic systems involves diffusion, degradation, dissolution and swelling followed by diffusion 2.  Polymers belonging to hydrophilic matrix systems, when exposed to an aqueous medium, do not disintegrate, but immediately after hydration develops a highly viscous gelatinous surface barrier which controls the drug release from and the liquid penetration into the center of the matrix system 3.

To achieve extended release through the use of water soluble polymer such as HPMC, the polymer must quickly hydrate on the tablet outer sheet to form a gelatinous layer (Dow, 2000). Hydroxypropyl methylcellulose (HPMC) has been widely used due to its rapid hydration good compression and gelling characteristics along with its ease of use, availability and very low toxicity 4-6. Methocel® K100M, Methocel® K100M CR and Methocel® K100LV CR are hydrophilic polymers that become hydrated, swollen and facilitates to diffuse the drug 7, 8. Cefuroxime axetil is a second generation broad spectrum cephalosporin antibiotic that inhibits bacterial cell wall synthesis like other β–lactam antibiotics 9. Cefuroxime axetil oral formulations are indicated for the treatment of upper and lower respiratory tract infections, in community acquired pneumonia and urinary tract infections 10, 11. Short biological half-life i.e. 1.2 hrs and other pharmacokinetic features of cefuroxime axetil make it a potential candidate for extended release dosage form 12.

In the present work an attempt has been made to formulate cefuroxime axetil 250mg extended release matrix tablet with the addition of release retarding polymers Methocel® K100M, Methocel® K100M CR and Methocel® K100LV CR in different ratios. The effect of viscosity grade and polymer loading on drug release were recorded in different pH dissolution medium. Various kinetic models were also used to evaluate the release kinetics and best optimized formulation were further analyzed on long term stability and results were analyzed by freely available R Gui® software.

Preparation of matrix tablets: The amount of cefuroxime axetil, Starch 1500®, sodium lauryl sulphate and magnesium stearate in each matrix tablet were kept constant while the other excipients (HPMC and Avicel PH 102®) and their quantities used for trial formulations are given in Table 1. HPMC was used in concentrations ranging from 30-10%. Drug and pharmaceutical excipients accurately weighed as per weight for 100 tablets bulk quantity passed through 40 mesh sieve (ASTM E11, BS-410) and mixed thoroughly together by following geometric dilution method in a suitable size polyethylene bag for 15 minutes then blended with magnesium stearate for another 5 minutes to get a homogenous blend. The powders blend was then compressed directly by single punch compression machine (Korsch: Erweka, Germany) at target weights 800mg (±5) to produce oblong caplet shaped uncoated tablets. Following are the pre-formulation tests performed to assess the physical characteristics of powder blends before compression.

Stability studies: Stability studies for best selected formulation (F15) under the ICH guidelines 16 (ICH 2003) were performed at controlled room temperature (25ºC±0.5°C at 75% relative humidity) for 12 months and at accelerated (40ºC±0.5°C at 75% relative humidity) temperature in a stability chamber (NuAire, Plymouth, MN 55447, USA) for six months. During which the formulations were tested physically and chemically for quality attributes and the results were analyzed by using R Gui® Software. 17

*In all models, % dissolved is fraction of drug released in time t

*Kₒ is the zero-order release constant

*R² is the Regression coefficient

*K1 is the first-order release constant

*KH is the Higuchi release constant

*KKP is the release constant incorporating structural and geometric characteristics of the drug-dosage form; n is the diffusional exponent indicating the drug-release mechanism

*KHC is the release constant in Hixson–Crowell model

Micromeritics of tablet blends: The extended release tablets of cefuroxime axetil were prepared by direct compression technique. Several studies have shown that HPMC based oral extended release tablets were prepared by direct compression method along with different fillers and binders 18-20. Blends of each trial formulation (F1-F15) were evaluated for bulk density, tapped density, compressibility index, Hausner’s ratio and angle of repose to obtain optimum flow and reproducible tablets with acceptable content uniformity. Table 3 showed values of bulk densities ranged from 0.27±0.16 to 0.34±0.67 gm/ml, tapped densities 0.31±0.19 to 0.41±0.37 gm/ml, Hausner’s ratio 1.13±0.16 to 1.27±0.47, compressibility index 11.54%±0.29 to 21.11%±0.37 and angle of repose 31.49°±0.09 to 41.85°±0.16. These parameters were found within the prescribed limits 13 (USP 36/ NF 31, 2013) and no significant difference was observed between the viscosity grades of HPMC (K100M, K100M CR and K100LV CR).

Pharmaceutical evaluation of tablets: All the batches of HPMC (K100M, K100M CR and K100LV CR) complied with the pharmacopoeial limits of weight, thickness, length and width (Table 4). The length and width variation results of developed cefuroxime axetil 250mg extended release formulations (F1-F15) showed a close resemblance (RSD<1%) which is directly related to weight (799.97±3.84 to 802.07±6.86 mg) and thickness (6.07±0.04 to 6.12±0.04 mm) of tablets. Crushing strength (9.50±1.10 to 13.47±1.29 Kg) and friability (<1%) of all the formulations were within acceptable limits indicating that the tablets had the capability to withstand shock and attrition during storage, transportation and consumption 13.

In the present study, the pharmaceutical assay was performed by HPLC (high performance liquid chromatography) to ensure uniformity of the dosage units. All the test formulations had assay and content uniformity within the acceptable limit (RSD<2%) as mentioned in monograph of cefuroxime axetil tablets 13. This indicates that the blending time selected for test formulations was appropriate and resulted in a uniform random blend 14 .

In vitro drug release studies: An ideal extended release formulation releases the required quantity of drug with predetermined kinetics to maintain effective drug plasma concentration. In the present study dissolution profile of all the formulations in different pH medium gave an insight into the effect of polymer concentration, polymer grades and additives on release profile of the formulations. Cefuroxime axetil is a poorly water soluble drug 23, so that hydrophilic polymer (HPMC) was chosen to develop matrix tablets and extensively used in previous studies 24-26 . From the release profiles, it was observed that the variation in grade of polymer and its concentrations from F1 to F15 had variable effect on drug release.

This result indicates that the drug release rate is decreases with increasing the concentration of polymer and also the viscosity of HPMC had effects on tablet erosion and drug diffusion characteristics but high viscosity HPMC K100M and K100M CR had no promising effect on drug release and desired rate at the end of 12 hours is not achieved. Various researchers explained the effect of different concentration of HPMC K100M and K100M CR on drug release from matrix tablet respectively 27, 28. Ferdous et al., in 2012 29 reported the use of high to low amount of K100M CR in

Islam et al., in 2012 30 examined the effect of K100LV CR as a single and in combination with Methocel® K15M CR and K4M CR in different percentages. In another analysis different grades of HPMC K100LV were used as extended release polymer to developed sustained release tablets of vildagliptin 31 . 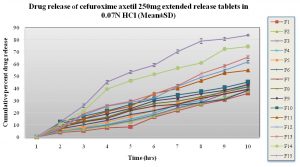 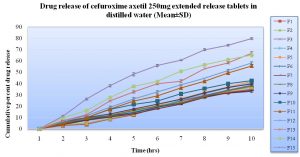 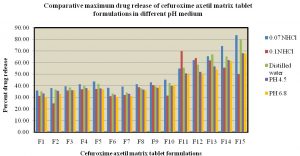 Drug release kinetics: The dissolution profile data of all test formulations were subjected to statistical model at each time point and decision of the model was based on goodness of fit. The model with the highest determination coefficient i.e. R2 was chosen as the best fit model 32-34. Results revealed that regression values of zero order at all pH were more away as compare to first order kinetics.

Stability studies: The stability studies of selected optimized extended release formulation F15 (K100LV CR 10%) were performed for 12 (Ambient temperature) and 6 months (Accelerated temperature) evaluation. All the physicochemical tests were within the limit and there was no color, shape, hardness and weight changes observed although drug content and dissolution results were also within pharmacopeial limits (Table 6). The stability studies data estimated by R Gui® software shows the shelf life of 28 months at ambient temperature (25ºC±0.5°C at 75% RH), whereas 13 months at accelerated temperature (40ºC±0.5°C at 75% RH).

CONCLUSION: From the data obtained, it can be concluded that the hydrophilic matrix of HPMC K100M and K100MCR tablets failed to control the cefuroxime axetil release effectively for 12 hours even at a low concentration of 10%. Formulated tablets (F1-F15) gave satisfactory results for various physicochemical evaluations like tablet dimensions, hardness, weight variation, friability and drug content. This study suggests that increase in concentration of polymers decreases the percent drug release and matrix tablets prepared with HPMC K100LV CR is better matrix system for extended release of cefuroxime axetil. Formulation F15 (10%) gave better extended drug release in comparison to other formulations in 0.07N HCl and distilled water dissolution medium (>80%) and best fitted to Higuchi (R2=0.938-0.981), Weibull model (R2=0.978-0.997) and Korsmeyer–Peppas model (R2=0.941-0.982) with non-Fickian release mechanism (n=0.436-0.553) and satisfied stability results.