ABSTRACT: Arsenic has become a major problem in arsenic contaminated areas today. Its consequences on human health have been increasing with an alarming rate. Apart from toxicological effects caused by arsenic accumulation in the body, it causes several disorders including male infertility. Arsenic has been implicated to expedite the generation of ROS and hence lipid per-oxidation leading to DNA damage, apoptosis, and malfunction of several proteins and enzymes. Reduced number of sperm cells and testosterone level is evident in myriad of literatures. Swiss albino mice were grouped as control and arsenic treated. Weight of testes of mice after arsenic treatment was found to be lower than that of control group with p-value <0.0001. Similarly, sperm count and testosterone levels were also lower in arsenic administered group as compared to control group with significance < 0.0001. Unlikely, MDA level in arsenic treated mice was higher than control mice (p-value<0.0001). Moreover, histological sections unravels significant issues related to arsenic toxicity and DNA damage can easily be traced in testes of arsenic treated mice. In conclusion, arsenic, being a major toxic agent, has been observed to be a causative agent of male infertility. In addition to Low sperm count, testosterone level and high level of oxidative stress, degeneration of spermatozoa and disorientation in arrangement of luminal epithelium in histological sections and DNA damage in testicular tissue help us put forth that arsenic accumulation is a potent causative agent for male infertility and it should be taken seriously.

INTRODUCTION: Arsenic contamination has been increasing at an alarming rate in various parts of the globe. Recently, apart from arsenic being a potential carcinogen, it is a major causative agent for many disorders like hyper pigmentation, keratosis, peripheral neuropathy, peripheral vascular disease, and male infertility 1, 2. Over the years, thousands of metals and chemicals have been released into our environment 3. Due to exposure with such metals, male reproductive health is severely damaged.

Poor sperm quality and consequently significant drop in male fertility rate have been documented by various authors 4-6. Nevertheless, Heavy metals have been an essential part of evolution of life and these metals have been central part of evolutionary mechanism. But ironically, heavy metals like arsenic, excess quantity, can produce toxicity and life has not been taught to handle the consequences of toxicological pressure. Frequently, non-essential metals mimic the role of essential metals or endogenous bio-molecules like estrogens which further gain access to cellular component thereby disrupting key cellular functions 7, 8.

Arsenic is believed to be associated with number of cellular components like proteins with structural, catalytic or transport functions, and DNA. Reactive Oxygen Species (ROS) generated by heavy metals are in transition phase like arsenic, iron, copper, vanadium which are able to cause the spinning of O2 thus, donating single electron, and finally producing fee radical species. ROS further disturbs functionality of several proteins and other bio-molecules including lipid. Superoxide or ROS attacks on lipid molecules initiates a chain reaction leading to formation of Malondialdehyde (MDA) through a reaction called Lipid Per-oxidation (LPO). Polyunsaturated Fatty Acids (PUFAs) in plasma membrane are extremely susceptible to per-oxidation 9. Reports have reaffirmed that lipid peroxides and superoxide interrupt signal transduction. Lipid mediated oxidative stress can lead to mutation and DNA damage.

Arsenic exposure has been observed to cause several metabolic disorders such as anemia 10, and hypertrophy of adrenal glands 11. Arsenic has been found to be associated with enzymes or proteins containing sulfhydryl group of cystein leading to impairment of their activity. Sodium arsenite has been reported to induce inhibitory effect on the activity of testicular steroidogenic enzymes, D5-3b-hydroxysteroid dehydrogenase (D5-3b-HSD) and 17b-hydroxysteroid dehydrogenase (17b-HSD) finally, reducing the weight of testes and accessory sex glands 12. Decrease in sperm count, sperm motility and increase in abnormal sperm were observed in arsenite-exposed mice.  A significant accumulation of arsenic in testes, epididymis, seminal vesicle and prostate gland has been documented in arsenic treated mice 13.

Animals: Swiss albino mice (Mus musculus) were reared in the animal house of S.S. Hospital and Research Institute, Patna. The male mice selected for the study were 12 weeks old and their weight was measured as 30±2 grams. The mice were kept in the polypropylene cages with paddy husk at room temperature 28±2ºC and humidity 50±5% in a controlled light (12 hrs light and 12 hrs dark). Animals were maintained in ideal conditions as per the ethical guidelines of the CPCSEA, (CPCSEA Regd. No. 1840/PO/ReBi/S/5/CPCSEA) Gov. of India and Institutional Animal Ethics Committee (IAEC).

Study Groups and Sampling: 6 male mice of control group were given distilled water as drinking water and ‘treated group’ (n=36) were administered 2mg/kg body weight of sodium arsenite for 2 weeks, 4 weeks, 6 weeks, 8 weeks, 10 weeks, and 12 weeks.  Mice were sacrificed after every 2 weeks. 2 mice died during the course of administration of sodium arsenite. Blood samples were collected from the sacrificed mice and centrifuged to obtain serum samples for estimation of Lipid Per-oxidation and Testosterone level. Testes from all the animals were removed and washed three times in isotonic saline solution (0.85 v/w %) and fixed in 10% formalin for histological study and analysis of DNA damage.

Sperm Count: The epididymis was removed and washed in isotonic saline. The semen was collected by puncturing epididymis at several places in 1ml distilled water and then sperm count was performed with help of Neubauer’s chamber and light microscope.

Lipid Per-oxidation: For the estimation of MDA level, blood samples were centrifuged at 3000rpm for 110 minutes to collect serum. Level of MDA was determined by standard TBARs method with slight modification 14.

Tunnel Assay: The deparaffinised tissue sections were dehydrated in graded alcohol and pre-digested with 50µl Proteinase K and incubated at room temperature for 15 minutes. The slides were placed in 50ml quenching solution containing Methanol and 30% H2O2 for 5 minutes. The slides were washed in PBS two times and immersed in 1xTdT Buffer for 5 minutes. 50µl of TdT Labelling mixture was added to each sample and incubated overnight at 4oC. The slides were transferred in 1xTdT stop buffer for 1 hour. After washing two times in PBS, diaminobenzidine H2O2 (DAB) chromogenic reaction was added to sections and counterstained with methyl green.

Statistical Analysis: Mean±SD and p-value were obtained using SPSS software (Statistical Package for Social Sciences, version 16.0). A p-value less than 0.05 were considered significant. Statistical analysis was performed with the help of one way ANOVA. 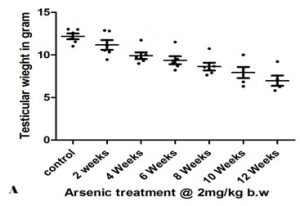 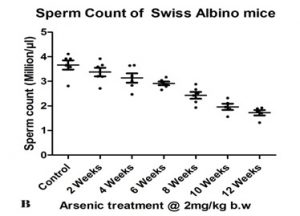 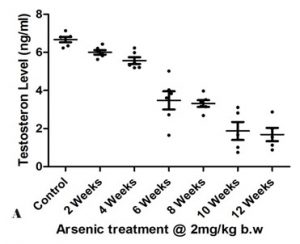 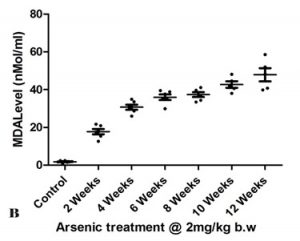 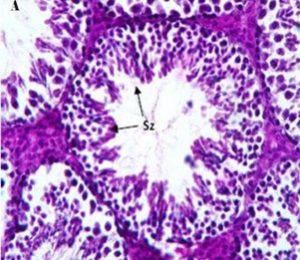 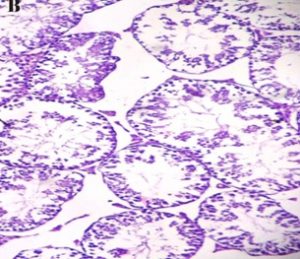 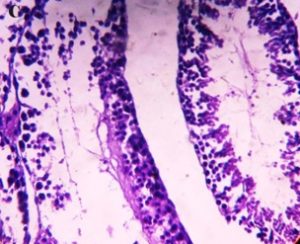 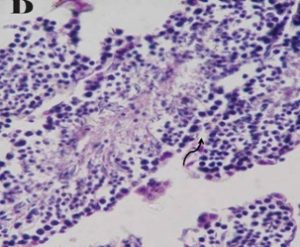 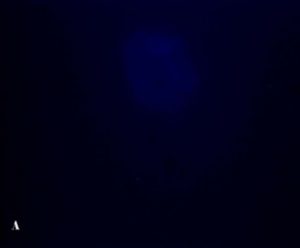 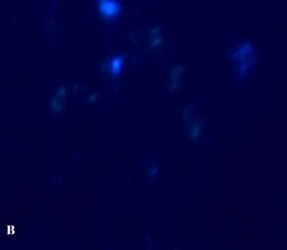 The reason behind increased luminal areas of seminiferous tubules and decreased mass of spermatozoa seen in sections of arsenic treated mice (Fig. 3) may be attributed to low level of testosterone surge and decreased production of its receptor. It has been established that arsenic can reduce the synthesis of ovarian steriodogenic enzymes 15. Decreased number of spermatozoa can be easily traced in histological sections (Fig. 3).

Arsenic has been documented several times to induce high production of ROS 16, 17. Lipid per-oxidation, a result of ROS attack on cellular lipid, can rupture the cells as well as nuclear membrane. This could be possible explanation of disorientation caused in cellular organization in histological sections in testes of arsenic treated male mice (Fig. 3). High physiological levels of ROS (Fig. 2 B) can damage normal regulation of sperm functions such as sperm capacitation, acrosome reaction, and sperm-oocyte fusion 18, 19. It has been reported that ROS can attack the DNA in sperm nucleus causing base modification, DNA damage, and chromatin cross-linking 20, 21, similarly found in our result (Fig. 4 B). Excessive generation of ROS in testes does not only alter the fluidity of sperm plasma membrane but also damages the integrity of DNA in nucleus of sperm. According to a study, apoptosis and oxidative stress are responsible for inducing DNA damage in germ cells 22. Interestingly, the Y-chromosome is particularly susceptible to oxidative stress mediated DNA damage and besides, Y-chromosome is mostly unable to correct any base deletion in double stranded DNA 23.

Arsenic has been classified as a potent endocrine-disrupting chemical in reproductive system. Mice with arsenic treatment tend to develop abnormalities in reproductive tracts such as suppression of gonadotrophins, and testicular androgen (Fig. 2 A), and germ cell degradation (Fig. 3) - these all affects are quite similar to those caused by estrogen agonists 24. The low levels of sperm count in arsenic treated mice (Fig. 1 B) are due to the low level of testosterone production. Apart from arsenic, other heavy metals like cadmium has also been documented to cause low sperm count in male mice 25. However, effect of arsenic in male infertility has been reported number of times but more solid foundation has to be established in the field of treatment of infertility.

The imbalance between reactive oxygen species (ROS) and total antioxidant capacity (TAC) can lead to oxidative stress which affects male reproductive system. Few toxic factors, like arsenic when accumulated in body, alter this physiological balance causing oxidative stress. It has been indicated that oxidative stress is associated with significant DNA damage including sperm DNA fragmentation. Similar observation has been reported on DNA damage and its association with oxidative stress 26.

CONCLUSION: Male infertility has become a major problem worldwide and danger to the future of mankind. The decreased testicular weight and sperm count of Swiss albino mice after the administration of arsenic indicate that arsenic is an important causative agent of infertility. Moreover, the decreased testosterone level in the present study supports that arsenic is a potent endocrine disruptor. It also increases oxidative stress which has ability to damage DNA. Microscopic analysis of testicular cells of the Swiss albino mice reveals the toxic effect of arsenic at cellular level. Therefore, present study supports that arsenic leads to DNA damage and alteration in gene expression, ultimately resulting in deregulation during spermatogenesis which affect number and motility of spermatozoa. The decreased number and motility of sperm eventually lead to infertility or in some group very low sperm count showing reduced fertility. On the basis of the results obtained in the study, it may be concluded that arsenic plays significant role in the infertility.  Nevertheless, the results are abundant but the way out to the crisis still remains insufficient.

ACKNOWLEDGEMENT: We are grateful to the Indian Council of Medical Research, New Delhi for providing financial support. Authors are also thankful to S S Hospital and Research Institute, for providing research facilities.

CONFLICT OF INTEREST: The authors declare that they have no competing interest or whatsoever.