RESOLVIN AND LIPOXINS ENDUE UNVEILING ROLE IN MOA OF ASPIRIN: A REVIEW

RESOLVIN AND LIPOXINS ENDUE UNVEILING ROLE IN MOA OF ASPIRIN: A REVIEW

ABSTRACT: Resolvins and lipoxins endue a novel way of approaching aspirin mechanism of action by developing models. Recent advances in research of aspirin from starting point Willow bark (Salix alba) to resolvins and lipoxins along with their repurposing network. Therefore, aspirin have a big impact on most interesting areas of research. Aspirin and there interaction with several targets molecules (Magic shotguns) give the option in the uses of various disorder but there MOA based uses in all cases not limited to COX rather than newer ones like resolvins, lipoxins, protectins and maresins, In particular, resolvin and lipoxins will play a central part while research aspirin and their rescheduling in different human diseases that’s are better emphasize by novel MOA of aspirin.

INTRODUCTION: On the basis of various published articles in the discovery of aspirin, its profound association to willow tree as well as on its pharmacological significance 1, 2, 3, 4. In 1852 Gerland first to prepare salicylic acid 5. Von Gerhardt, 1853 salicylic acid structure comprises phenol and carboxylic group. He also developed acetylsalicylic acid, or aspirin 6, 7. 1859-60 Hermann Kolbe and E. Lautemann discovered the chemical structure of salicyl alcohol and synthesised salicylic acid 8, 9. Felix Hoffman Synthesized aspirin by acetylating the hydroxyl group of salicylic acid at the ortho position 10.

Sir John Vane, He proved the anticoagulant properties of aspirin by blocking the biosynthesis of prostaglandin, the pain messengers. He suggested that aspirin may reduce the risk of cardiovascular disease which led to use low-dose aspirin as a preventative measure in various cardiac conditions 11, 12. Aspirin and their uses in different diseases condition like pain, fever, arthralagia, anti-inflammatory, musculoskeletal pain, osteoarthritis, rheumatism, anti-coagulant etc 13, 14, 15.

In 1939, Von Euler named a substance isolated from genital glands prostaglandins (PG) 16. Arachidonic acid derived lipid mediators like prostaglandins, thromboxanes, prostacyclins and leukotrienes and are widely often pro-inflammatory activities 17, 18. A general enlightenment for the effect of poly unsaturated fatty acids (n-3PUFAs) is to envision that they might act as direct antagonists or as upstream suppressors of cyclooxygenase (COX) and lipoxygenase (LOX) enzyme expression, thereby inhibiting the generation of prostaglandins or leukotrienes 19. Recent studies have now added an important turn to this; elucidate n-3 PUFAs as precursors of a particular set of lipid mediators that may be act through distinct receptors to unfold anti-inflammatory effects. These new PUFA-derived, anti-inflammatory mediators have been known as protectins and resolvins. Serhan et al., identified resolvins in inflammatory exudates in the murine air pouch model of inflammation during the resolution phase, and named them accordingly “resolution phase interaction products” or resolvins 20, 21, Protectin D1 was initially found to attenuate damage of brain ischemia-reperfusion injury and thus named neuroprotectin D1 22. Regarding anti-inflammatory and proresolution lipid mediators were made in the field of arachidonic acid derived lipoxins, with the particular appreciation of the role of aspirin-triggered acetylation of COX-2 in one lipoxin synthesis pathway 23, 24, 25, recent years have added a large body of evidence towards an important role of a wide range of n-3PUFA-derived resolvins in this reference. 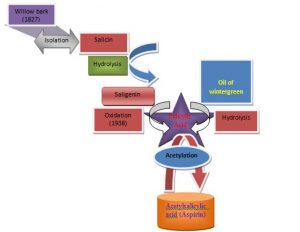 Presumably one of the most provocative aspects of the mechanism of action of aspirin stems from its ability to trigger LX synthesis (so-called aspirin-triggered epi-LXs) as a product of acetylating the active site of COX 2 in endothelial or epithelial cells, a possessions not shared with other NSAIDs 26. Besides, aspirin (ASA) treatment can filibuster the LX system, triggering formation of their 15-epimeric or their R-containing isoform (ASA-triggered LX) that serve as LX mimetics, to impose proresolution status 27, 28, 29. 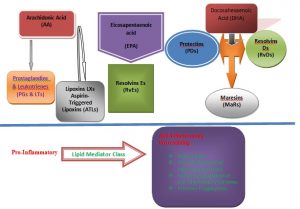 2. Protectins (Neuroprotectins) and Maresins: Docosahexaenoic acid (DHA) is a highly conserved structure, an essential fatty acid in humans. Recent results from this laboratory indicate that DHA is also a precursor to potent local autacoids 30. These include the D-series resolvins, protectins and maresins that are produced in self resolving inflammatory exudates in mice 31. Lipid mediators such as prostaglandins and leukotrienes play pivotal roles in the initiation of acute inflammation. Whereas resolvins and protectins promote and stimulate active resolution 32, 33.

In studies of resolvin formation in brain tissue in response to aspirin treatment, it was shown that new docosatrienes termed initially ‘neuroprotectins’ were produced. Like the leukotrienes, there are three double bonds in conjugation, hence the term ‘triene’, though there are six double bonds in total. As it is now recognized that the formation and actions of these docosanoids are not restricted to neuronal tissue, it has been suggested that the simpler term ‘protectins’ is preferable 34. An alternative single oxygenation is found in human macrophages and platelets in which a mediator termed maresin 1(7R,14S-dihydroxy-docosa- 4Z, 8E, 10E, 12Z, 16Z, 19Z-hexaenoic acid - ‘macrophage mediators in resolving inflammation’ or ‘MaR1’) is formed via the action of human 12- lipoxygenase35, 36, 37.

3. Role of Specialized pro-resolving mediators (SPM): Failure of resolution programs contributes to metabolic diseases and that SPMs may play pivotal roles in their resolution 38. Treatment of inflammation should not be restricted to the use of inhibitors of the acute cascade (antagonism) but broadened to take account of the enormous therapeutic potential of inducers (agonists) of the resolution phase of inflammation 39.

Highlight the novel role of lipoxins and resolvins in counter-regulating PDGF (Platelet-derived growth factor) -receptor activation and subsequent VSMC (vascular smooth muscle cell) migration. The relative deficiency in circulating ATL levels in human patients with PAD (Peripheral arterial disease) suggests that altered resolution is associated with atherosclerosis, and that ATL may serve as a valuable biomarker for progressive vascular inflammation 41.

In pregnant women, LXA4 is found in circulation at 24 weeks gestation and in lower levels in non-pregnant women47. Myometrial biopsies from pregnant women show LXA4 receptor (ALX/FPR2) present on myocytes and neutrophils with LXA4reduc-ing agonist-stimulated IL-6 and IL-8 in myometrium, suggesting LX may stimulate resolution of local inflammation in both physiologic and pathologic labor in human parturition 48. LXA4 also mod-ulates estrogen receptor 49. In preeclampsia, LX counters pro-inflammatory factors produced in women that stimulate PMN adhesion to vascular endothelial cells 50 LXA4, RvD1 and RvE1, identified in milk from mothers during the first month of lactation 51, 52.

3.2-Resolvins: Resolvins consists of omega-3 fatty acid derived mediators, including E series resolvins generated from eicosapentaenoic acid (EPA), and carry potent anti-inflammatory properties. They indicate that the 5-lipoxygenase in human leukocytes is a pivotal enzyme that can produce both pro- and anti-inflammatory chemical mediators 54.

Specialized pro-resolving media-tors (SPM) including lipoxins, resolvins, protectins and maresins that are each temporally produced by resolving-exudates with distinct actions for return to homeostasis. Aspirin and NSAIDs inhibit prostanoid biosynthesis, but aspirin is an irreversible inhibitor that acetylates COX, and NSAIDs are considered reversible inhibitors 55 RvD1 is chemo preventive in colitis-associated colon carcinogenesis in mice 56 and found both RvD1 and RvD2 reduce tumor growth in mice in nano gram amounts 57 and may be useful together with cancer chemotherapies. RvD1 and AT-RvD1 can serve as important modulators of allergic airway responses by decreasing eosinophils and proinflammatory mediators and promoting macrophage clearance of allergen 58 PGH2 and the ASA-triggered novel lipid mediators that are of interest both in the reproductive system and the study of endogenous control of inflammation and tissue injury 59. Resolvin D2 show a new role in the treatment of rat PD (Parkinson diseases) paradigm 60, 61.

DISCUSSION AND CONCLUSION: Aspirin has never discontinued to daze the clinician, the researcher, and society as a entire. Not only does it present with new benefits for treating an ever-expanding list of apparently unrelated diseases at an astounding rate but it also enhances our understanding of the nature of these disease processes. Originally, the beneficial effects of aspirin were shown to stem from its inhibition of PG synthesis.

Aspirin is used to reduce fever and relieve mild to moderate pain from conditions such as toothaches, muscle aches, headaches and common cold. It may also be used to reduce pain and swelling in conditions such gout and arthritis. Low dose of aspirin also use as haemorheological agent to prevent blood clots that effect reduces the risk of stroke and heart attack. Recently aspirin is also use in clogged arteries (such as coronary stent, bypass surgery, carotid endarterectomy). Therefore aspirin show magic shotguns (that interact with lots of molecular targets will lead to more effective medications for a variety new disorder) that is a mystery for several year from starting point to till date they are interact with several molecular targets and use in various medication but never ignore the mechanism of action via COX and neither via a newer mechanism like resolvins, lipoxins, protectins and maresins, Gene receptor, PUFA and DHA are also base interacting molecules endue unveiling role in MOA of aspirin and there uses also, the newer mechanism emphasize better understanding and clue regarding present therapeutic uses of aspirin and its repurposing for next goal than previous one.

However, inhibiting COX activity additionally to aspirin can also inhibit pro-inflammatory pathways, expression of gene, and other distinct factors from eicosanoid biosynthesis that switch inflammation as well as enhance the synthesis of protective anti-inflammatory factors endogenously. It is remains unclear its true mechanism of action in anti-inflammation, other than to acetylate the active site of inducible COX 2 and generate epi-LXs. But never ignore something new and profound roles in a range of host defense responses, and new question arises here ‘‘is the true mechanism is the induction of anti-inflammatory ones?’’ rather than the inhibition of putative pro-inflammatory mediators. So induction of anti-inflammatory ones like resolvin and lipoxins endue unveiling role in MOA of aspirin and may give batter option in drug repurposing or rescheduling research for new therapeutic goal.

ACKNOWLEDGEMENT: The authors are grateful to Dr. Ashutosh Mishra for their guidance and support during review preparation.