REVERSAL OF ROSIGLITAZONE HEPATOTOXICITY BY SILYMARIN ON RATS

REVERSAL OF ROSIGLITAZONE HEPATOTOXICITY BY SILYMARIN ON RATS

INTRODUCTION: Drug-induced hepatotoxicity is frequently a major safety issue for an investigational new drug. It may occur as an unexpected idiosyncratic reaction to an otherwise nontoxic drug or it may be an expected consequence of the intrinsic toxicity of a drug, taken in a sufficiently large dose to cause liver injury 1.

The worldwide prevalence of diabetes is increasing day by day and recent estimation of WHO states more than 180 million people worldwide has diabetes.

The number is likely to be more than double by 2030. Around 3.2 million deaths every year are attributable to complications of diabetes, six deaths every minute 2. Synthetic hypoglycemic agents can produce serious side effects including hematological, coma, and disturbances of liver and kidney, gastrointestinal disturbances, fluid retention 3. Recently, a large prospective cohort study was performed to examine whether patients with type 2 diabetes are at an increased risk of developing acute liver failure 4.

Anti-diabetic drugs are having high risk of causing hepatotoxicity. Some of the research works shows that, the oral hypoglycemic agents like sulfonylurea and thiazolidenedione (TZDs) causing hepatotoxicity. Rosiglitazone is a member of the TZDs class of drug acts to enhance sensitivity to insulin in skeletal muscle, adipose tissue and the liver. Troglitazone is the original preparation in this class, has been associated with idiosyncratic hepatotoxicity, sometimes resulting in liver failure and death.

Based on this, in the present study, we have taken rosiglitazone to evaluate its hepatotoxic potential. Moderate to severe acute hepatitis has occurred in several adults who had been taking this drug at the recommended dose for 2-4 weeks.

Plasma Rosiglitazone concentrations may be significantly increased in patients with pre-existing hepatic impairment and very few case reports have implicated that it causes hepatocellular injury, granulomatous hepatitis and severe cholestatic hepatitis 5. The hepatotoxicity can be minimized by co-administration of various proven hepatoprotective agents 7.

In the present study we studied the hepatotoxic potential of rosiglitazone and protective effect of silymarin by in-vitro and in-vivo method.

Experimental animals: Albino rats of either sex weighing 150-200 gm were used for the study. All animals were kept under standard husbandry conditions for 12hr dark and light cycle respectively in standard propylene cages. The animals were fed with standard food and water ad libitum. All the experiments were approved by Institutional Animals Ethics Committee of JSS College of Pharmacy, Mysore (No.033/2009).

Midline incision was made on the abdomen of the anaesthetized animal. The portal vein was canulated with needle number 25 connected to a 10 ml disposable syringe. The needle was tied in place and the inferior vena cava was cut below the renal vein. Perfusion of the liver was started immediately with Ca2+-Mg2+ free Hanks Balanced Salt Solution (HBSS). When the liver was thoroughly perfused (i.e. has turned white), the flow of the HBSS was stopped and the needle was removed.

The liver was transferred to a sterile beaker containing Ca2+ - Mg2+ free HBSS and minced into small pieces, which were transferred to a sterile conical flask containing 10 ml of 0.075% Collagenase in HBSS. The cell suspension thus obtained was mixed properly and centrifuged at 2000 rpm for 10 minutes. The cells were washed with Dulbecco’s Modified Eagle Media (DMEM) 2-3 times and suspended in complete medium and incubated at room temperature for 1.5 hrs possibly to recover from the stress and membrane injury suffered during the isolation of cells. The isolated rat hepatocytes were cultures in DMEM at density of 1X106 cells/ml 9. Viability of the isolated cells was determined by Trypan blue exclusion assay by counting the number of stained and unstained cells. The cell viability in any case should be more than 90%10.

The primary rat hepatocytes thus obtained were used for studying the hepatotoxic potential of rosiglitazone. Fixed number of hepatocytes (1×106 cells/ml) was incubated with different concentrations (100, 150, 250 and 500 μg/ml) of rosiglitazone in sterile test tubes. The above cell suspension was incubated for 3 hr and after 3hr of incubation the cell viability was determined by the Trypan blue exclusion assay. Afterwards cell suspension was centrifuged at low speed (2000 rpm) for 15 min.

The supernatant solution was used for the estimation of marker enzymes like GOT, GPT and LDH. All determinations were done in Semi Auto analyzer (Micro lab 300) using Mark diagnostic kits 10.

In-vivo hepatotoxicity and hypoglycemic studies of Rosiglitazone: The experimental animals were acclimatized one week for laboratory conditions before the experiments. The animals were divided into four groups and treated as per the Table 1. Hyperglycemia was induced by alloxan (45mg/kg i.p) in overnight fasted rats except group I animals. After alloxan administration the animals blood glucose level was checked after 48 hrs to 72 hrs using glucometer, if the blood glucose level was above 140 mg/dl, that animal was consider as hyperglycaemic animals. These hyperglycaemic rats were used for the study 11.

TABLE1: TREATMENT SCHEDULE FOR THE STUDY OF IN-VIVO HEPATOTOXIC POTENTIAL OF ROSIGLITAZONE

The liver wasremoved andwashed in cooled 0.9 % saline, kept on ice and subsequently blottedon filter paper, then weighed and homogenized in cold phosphate buffer (0.05 M, pH 7.4). The homogenates were centrifuged at 10000 rpm for 10 min at 4 ºC (MPW-350R, Korea) and supernatant12 was used for the estimation of lipid peroxidation (LPO) 13. The supernatant was again centrifuged at 15000 rpm for 1 hr at 4ºC. The supernatant obtained was used for further estimation of superoxide dismutase (SOD) 14, catalase (CAT), glutathione (GSH) 15.

Statistical analysis: Experimental results were given as Mean±SEM and the values were evaluated using the one-way analyses of variance (Tukey multiple comparison test). P-values < 0.05 were regarded as significant.

Values are presented as Mean ± SEM of triplicate values.

Values are Mean ± SEM of triplicates

The above results clearly demonstrate the hepatotoxic potential of rosiglitazone which is significant in all parameters tested when compared with normal rats. The results suggest that, the silymarin administration has reversed the liver injury induced by rosiglitazone without compromising its hypoglycemic activity (discussed below).

DISCUSSION: Drug-induced liver injury (DILI) are the injuries to liver that are associated with impaired liver function caused by exposure to a drug or another non-infectious agent such as physician-prescribed medications, over-the-counter medications, vitamins, hormones, herbs, illicit ("recreational") drugs and environmental toxins 16. Many drugs have been withdrawn from the market because of drug induced liver injury.

Recently troglitazone a novel hypoglycemic agent was withdrawn from the market and other drugs of this class may have same degree of liver injury. Based on the above facts, in the current study we have evaluated the hepatotoxic potential of rosiglitazone by in-vitro as well as in-vivo method and also assessed the protective effects of silymarin. Isolated rat hepatocytes have become a useful model for pharmacological, toxicological, metabolic and transport studies of xenobiotics since the development of techniques for high yield isolation of rat hepatocytes 17. Freshly isolated rat hepatocytes are also very useful and common tool for study of cytotoxicity and metabolic studies in this area, as they keep enzymatic activity similar to in vivo for several hours.

In the present study, we have evaluated the hepatotoxic potential of rosiglitazone by taking into consideration reduction of viability of hepatocytes and leakage of enzymes, which are considered to be the markers of cellular injury. Incubation of rat hepatocytes with rosiglitazone caused significant toxicity at 100, 150, 250 and 500 µM, possibly due to injury of plasma membrane of hepatocytes resulting in the leakage of cellular enzymes and thus leading to increased levels of GOT, GPT and LDH in the cell suspension as shown in Figure 1. These studies confirm hepatotoxicity and also indicate satisfactory standardization of hepatotoxicity caused due to rosiglitazone.

Serum Glutamic Oxaloacetic Transferase, Serum Glutamic Pyruvic Transaminase, alkaline phosphatase, total Bilirubin in plasma has been reported to be sensitive indicator of liver injury18. The disturbance in the transport function of the hepatocytes as a result of hepatic injury causes the leakage of enzymes from cells due to altered permeability of membrane. This results in increased levels of SGOT, SGPT, TB and ALP and decreased levels of TP in the serum. 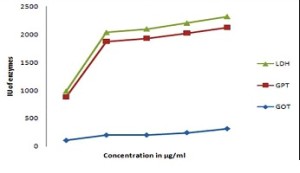 Silymarin co-administration  significantly decreased the rosiglitazone induced elevated levels of serum marker enzymes, SGOT, SGPT and ALP and total bilirubin and also increased the serum total protein levels which was decreased by rosiglitazone indicating hepatotoxicity of rosiglitazone, which can be reversed by silymarin as shown in Figure 2. 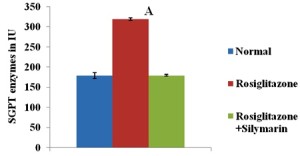 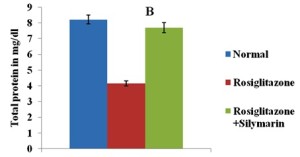 Inbuilt antioxidant systems like SOD, CAT, GSH etc. protect the tissues from free radical attack but excessive release of ROS power over this system resulting in organ damage 19.When compared to normal group, rosiglitazone treated rats showed decreased levels of SOD, CAT and GSH in the liver tissue and increase in the levels of TBARS lipid peroxidation indicating improper functioning of the antioxidant system.

Co-administration of silymarin increased the levels of antioxidant enzymes SOD, CAT, GSH and decreased TBARS lipid peroxidation (Table 5) indicating improvement in the functioning of the antioxidant system. Minimizing the hepatotoxic potential of modern drugs without compromising their therapeutic value is challenge for the modern drug development. In the present study we have evaluated the hypoglycemic activity of rosiglitazone in alloxan induced hyperglycemic rats alone and with silymarin co-administration as give in Figure 3.

At the end of 1st, 2nd and 3rd week, rosiglitazone decreased the blood glucose level as that of normal animals significantly both when given alone or co-administered with silymarin. These results clearly demonstrate the usefulness of co-administration of silymarin in minimizing the hepatotoxic potential of rosiglitazone without compromising on its hypoglycemic activity. 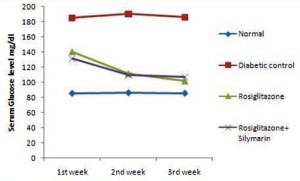 CONCLUSION: In conclusion, based on the results obtained, it is evident that, the rosiglitazone has hepatotoxic potential and this can be minimized by co-administration of silymarin. However further research is required to elicit exact mechanism by which rosiglitazone produce hepatotoxicity.